Developed during the mid 1970’s, the AH-64 Apache represents one of the most widely used and recognizable attack helicopters in the world. Coming with update ‘Viking Fury’, War Thunder pilots will have the chance to take control of several variants of one of the most legendary flying machines from recent military history - all coming as part of the next major update!

In the early 1970’s, the US Army was keen to adopt a more powerful attack helicopter, with improved anti-tank capabilities and performance over the existing AH-1 Cobra in service at the time. As a result, the Army initiated the ‘Advanced Attack Helicopter’ (AAH) program in November of 1972, requesting design proposals from a number of prominent American helicopter manufacturers.

Subsequently, various designs were proposed by Bell, Boeing, Hughes, Lockheed and Sikorsky. Of all the proposals, the Army picked two designs for further development - the Hughes’ Model 77 (YAH-64) and Bell’s Model 409 (YAH-63).

After conducting their maiden flights on the 30th of September and the 1st of October, 1975, respectively, further testing of the two prototypes showed deficiencies in the fields of survivability and undercarriage stability on Bell’s Model 409. As a result, Bell’s design was excluded from the competition, while Hughes’ design was declared as the winner of the AAH program in 1976.

Following this, work on refining the YAH-64’s design continued throughout the late 1970’s. As part of this further development, the YAH-64 was optimized for the use of the newly developed AGM-114 Hellfire missile, which was in development since 1974. By the end of the ‘70’s and going into the early ‘80’s, the AH-64 was considered ready for full scale production. In 1981, the first pre-production machines were built, while the first production models began rolling off the assembly lines in 1983. Since then, the Apache has been produced in a huge numbers, participating in virtually every scale military operation of the US Army: Panama, Iraq, Bosnia, Kosovo, etc. Israel became the first foreign operator of the Apache named AH-64 Peten, where this helicopter saw intense combat in Lebanon and Gaza strip. 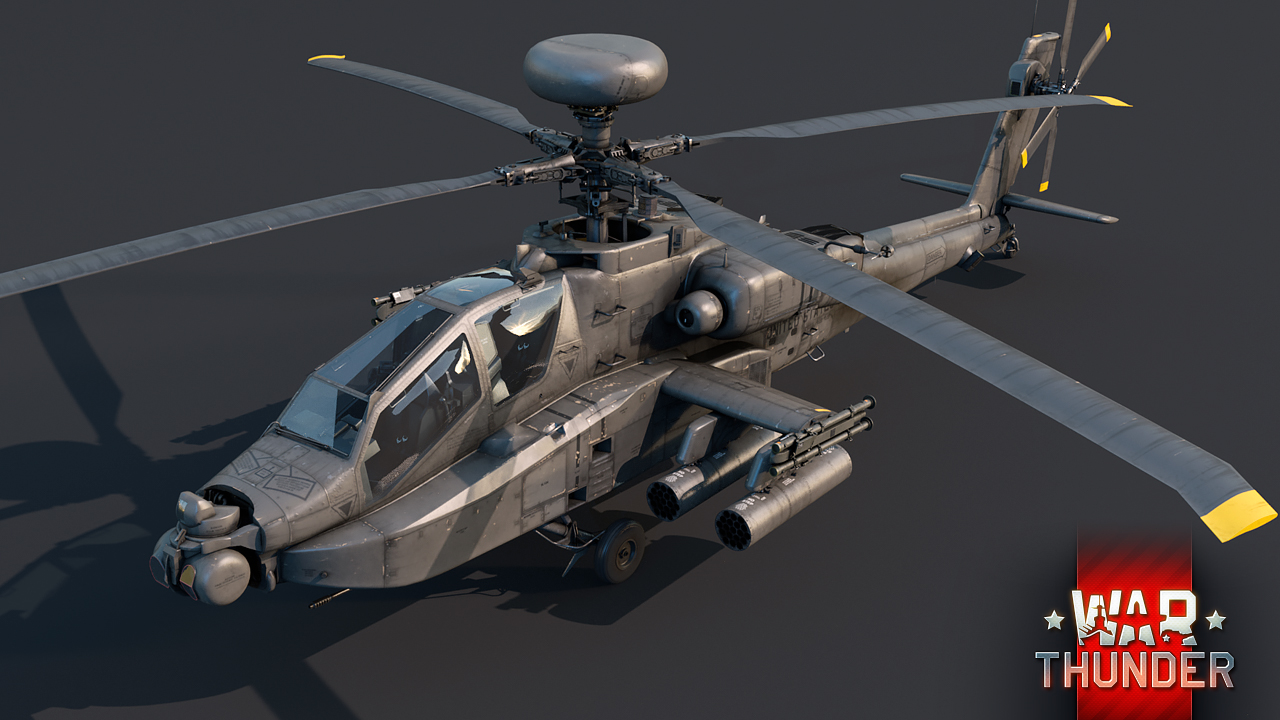 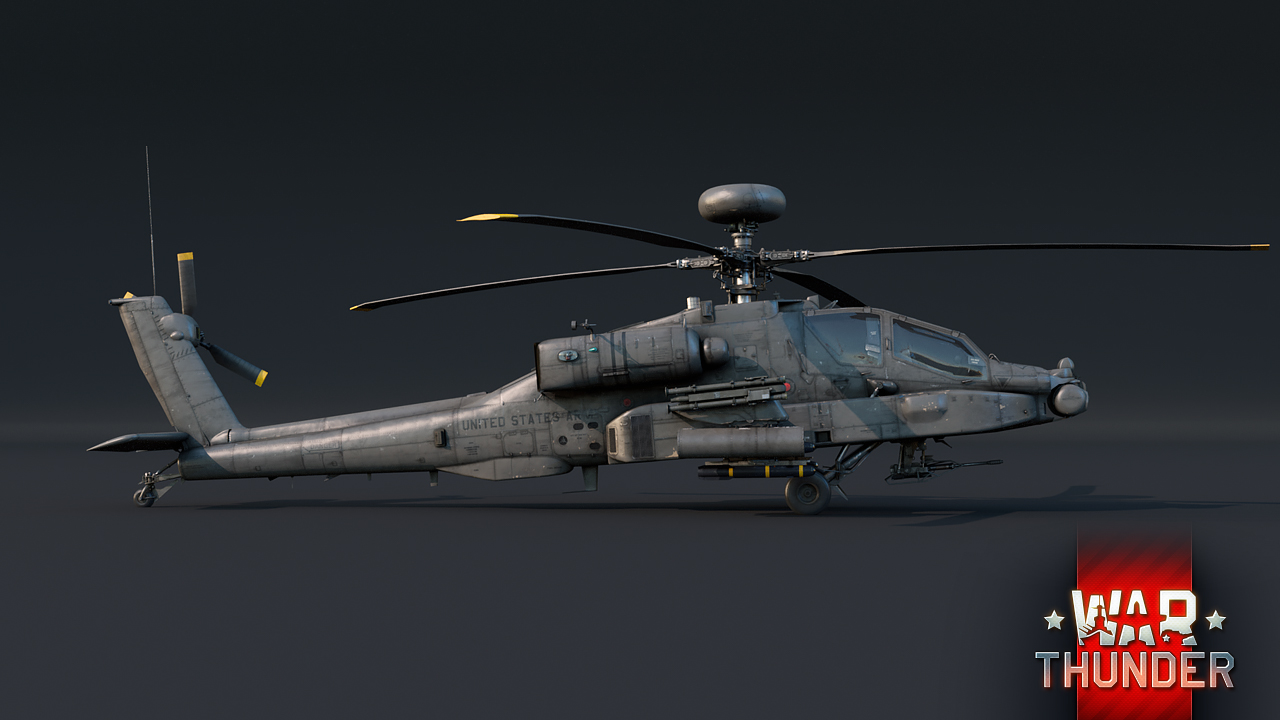 The AH-64 Apache will arrive in War Thunder as part of the upcoming update 1.97 ‘Viking Fury’ and will become available to pilots in several different variants. Namely, pilots will gain access to both the early AH-64A Apache, as well as the later, more advanced AH-64D Apache Longbow, and its British version, the AH Mk.1. For pilots that wish to add yet another Apache to their virtual hangar, a special Israeli premium version of the AH-64A will also be available for purchase on the online store, which will provide additional in-game benefits and speed up research on the regular tree versions!

Dominating the AH-64’s silhouette are the two T700-GE-701 turboshaft engines, mounted in nacelles on either side of the fuselage, thus giving the helicopter its distinctive visual appearance. Producing around 1,770 horsepower each, the engines of the  AH-64A are able to push the helicopter up to a very respectable top speed of 190 mph (307 km/h). The engines and the corresponding flight performance are some of the main factors that distinguish the early versions of the Apache from the later ones, namely the AH-64D Apache Longbow. The latter is fitted with T700-GE-701C engines, outputting close to 1,970 horsepower each, serving to not only help offset weight increases, but to also keep the top speed of the machine at an impressive 183 mph (295 km/h). Longbow also features Hellfire II missiles.

However, the Apache isn’t just fast while flying in a straight line, it’s also highly maneuverable. Being designed from the start for so called ‘nap-of-the-earth’ (NoE) flying, the Apache possesses extremely high agility, allowing it to virtually stay glued to the terrain below it during low-altitude flying, as long as the pilot behind the controls has the nerves and skill to successfully pull it off, of course. In turn, this makes the machine an ideal choice for surprise “pop-up” attacks from behind terrain, thus standing a good chance of avoiding detection by high-tier radar-equipped SPAA.

In addition to possessing some excellent flight characteristics, aspiring commanders of this machine will also be most pleased to hear that all versions of the Apache are no slouches when it comes to firepower either. In addition to its primary armament - a nose-mounted 30mm chain gun - the Apache also has access to Hydra-70 unguided rockets, up to 16 Hellfire missiles, as well as the AIM-9L Sidewinder (AH-64A only) or the AIM-92 Stinger air-to-air missiles. Naturally, these weapons can be used in various combinations, depending on the variant of the AH-64.

Having touched on the subject of AH-64 variants, it’s worth talking about the unique AH-64A Peten version. Being a premium vehicle, the AH-64A Peten will naturally come with all upgrades unlocked and installed immediately after players obtain the vehicle.

The iconic AH-64 Apache will finally be making its way to the battlefields of War Thunder and thanks to coming in a number of different variants, pilots will have the chance to experience the legendary Apache in several different ‘flavors’.  Be sure to unlock the AH-64 Apache and rain down death and destruction on your enemies in War Thunder update 1.97 ‘Viking Fury’! In the meantime, be sure to stay tuned to the news to find out what else the next major update has in store for you. Until then, clear skies pilots!

Commenting is no longer available for this news
Rules
ZeroAce58
45

Nothing else to say!

HAN_ShotFirst, ill translate this. "in the hands of a skilled pilot the player can reap the best rewards"

The Ka-52 is still far better than this. I told y'all the Apache wouldn't be all that great when compared to these things, and it shows. All this has are hellfires with better pen and that's it. Still can't beat the 50's and 52's 10km range which - by the way - is still only reachable by the adats.

PrinzEugenPls, The Hellfires have 9.5km range, very similar and cannot be reached by Axis SAMs, only the ZPRK has the range.

Taikapallo, Nice you posted yourself crying

OK, you may stop asking for Apache, so start whining about Mirage instead :p

Splorfff, Yea another biased NATO nation (Swedish) But still no 1990+ tank for Russians... And ZTZ98 and ZTZ99 for China please.

Russian bias xDDD Coins:¯\_(ツ)_/¯ Mi-28N still dont have radar xDDD If you don't have to add a radar to it (well, of course, Russian bias USA suffers) change the name of this Mi-28 to version D.