The CV 90105 TML is an experimental light tank, developed in the mid 1990s as part of a joint venture between the Swedish Hägglunds and French GIAT companies. Arriving as part of the Swedish ground forces tree with War Thunder update 1.97 ‘Viking Fury’, tankers can look forward to commanding this unique piece of Swedish ground tech!

Briefly: An experimental light tank made up from the hull of the Strf 90 IFV and the GIAT TML 105 turret, known for its use on the AMX-10RC.

Development of the CV 90105 TML began in the early 1990s as a joint venture of the Swedish Hägglunds and French GIAT companies. The idea behind the project was to create a capable new light tank as part of the Strf 90 family of vehicles, while using only components which were already available. On one hand, this would keep development time and costs relatively low, while on the other hand make the new vehicle more attractive to customers which already operated some of the CV 90 series of vehicles.

As such, engineers took the hull of the Strf 90 IFV and fitted it with the GIAT TML turret, housing a 105 mm G2 cannon - an upgraded version of the turret used on the successful AMX-10RC.

The first and only demonstrator vehicle was ready in 1994, undergoing various trials. Despite proving the project’s viability, the demonstrator didn’t convince any foreign operators to place orders for the newly developed CV 90105. As such, further development of the project was cancelled, although the idea of creating a 105 mm armed Strf 90 version would remain, resulting in a renewed attempt some time later, but that’s a story for another time. 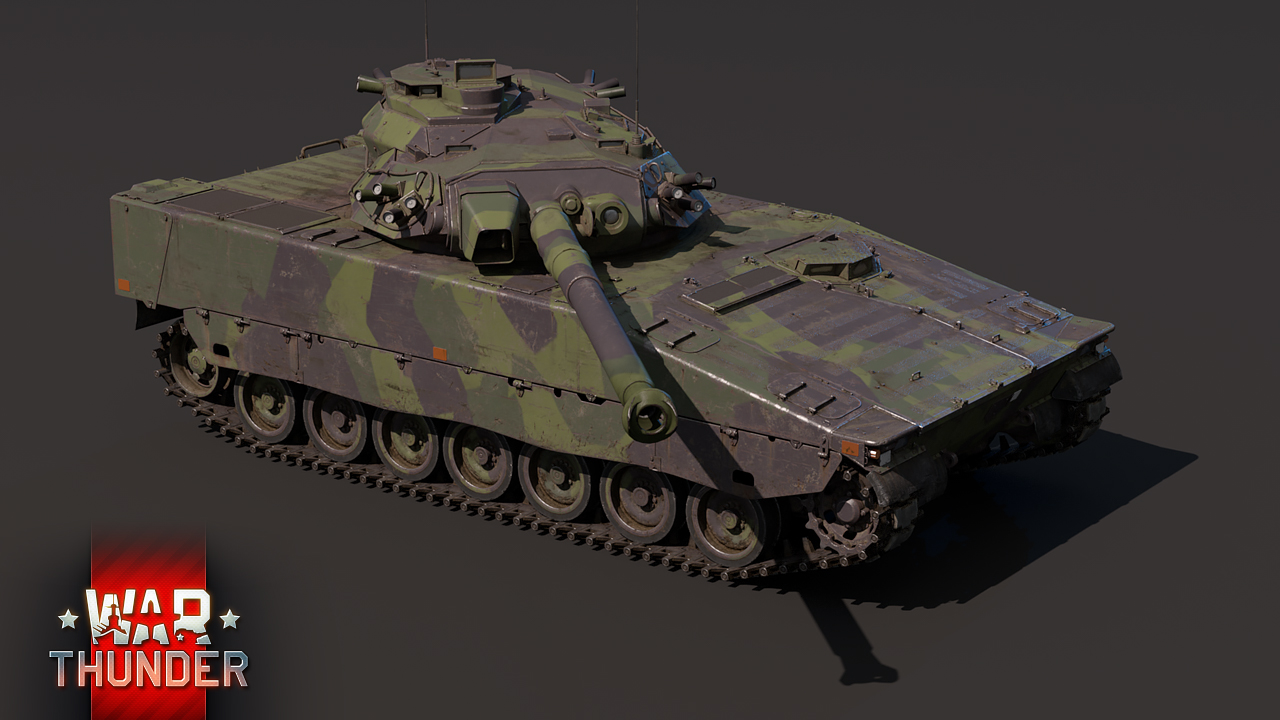 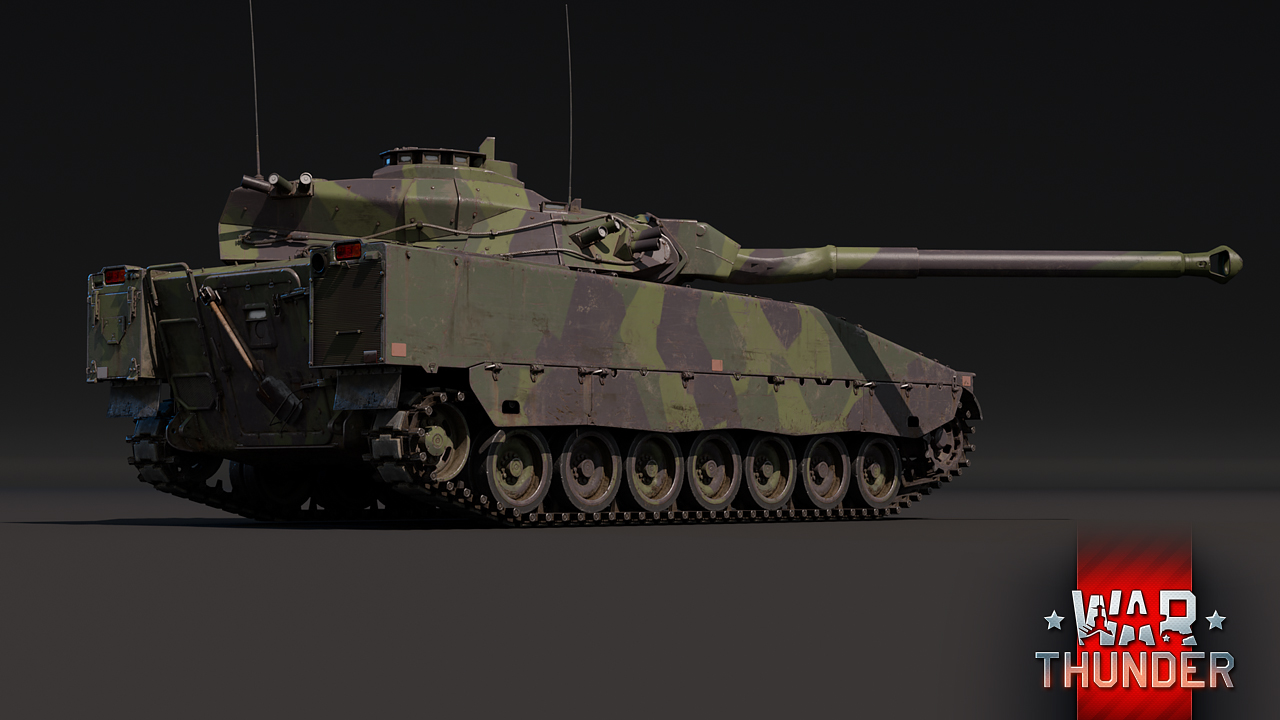 In War Thunder, the CV 90105 TML will be the top ranking premium vehicle, available at rank VI of the upcoming Swedish ground forces tree with the release of update 1.97 ‘Viking Fury’. Compared to the standard version of the Strf 90, this experimental version of the vehicle features a different turret, housing a bigger caliber cannon as well as offering the usual premium reward bonuses, thus speeding up progress towards acquiring the top tier Swedish ground tech!

Contrasted with the standard Strf 90, also available to tankers in the regular tree under the name ‘Strf 90C’, the CV 90105 is a further development of the vehicle, featuring an upgraded version of the GIAT TML turret. The new turret also houses the vehicle’s second most notable upgrade - the larger 105mm G2 cannon with stabilizer.

Unlike the fully automatic 40mm Bofors cannon found on the base version of the vehicle, the CV 90105’s 105mm G2 cannon trades rate of fire for gun caliber and accordingly more powerful ammunition. As such, aspiring commanders of this machine can expect to have more success in engaging hostile vehicles frontally and don’t need to rely as much on flanking maneuvers, thanks to the cannon’s excellent ballistic properties, stabilizer, thermal vision and wide range of potent ammunition types, ranging from HEAT-FS over HESH and going up to APFSDS rounds.

As far as the other aspects of the vehicle are concerned, they remain mostly identical to the base version. Thus, the CV 90105 TML inherits the Strf 90C’s excellent mobility, being able to reach a top speed of 70 kph on roads and even managing 45 kph in reverse, thanks to its 550 hp supercharged diesel engine!

On the other hand, the CV 90105 TML also inherits the Strf 90C’s arguable greatest weakness, namely weak armor protection. Being fitted with only 20 and 35mm of armor plating at its hull and gun mantlet, respectively, means that the vehicle is only immune to low caliber cannon rounds, while incoming fire from bigger cannons will need to be actively dodged by commanders, using the vehicle’s superb mobility.

Overall, the CV 90105 makes for a fantastic ‘hit & run’ type of vehicle - striking the enemy hard and disappearing before a counterattack can be mounted against it. Thanks to its excellent combat dynamics, it makes for the perfect choice for tankers who prefer a fast and aggressive playstyle and also wish to speed up their progress to the top rank of the Swedish ground forces tree!

The CV 90105 TML can be purchased via a special bundle in our online store and will become available to all its prospective owners with the release of update 1.97 ‘Viking Fury’. We’ll see you there, tankers!

Commenting is no longer available for this news
Rules
Lockland
41

Good tank, but will probably get slaughtered by Ka50 and Ka52(saaaaaad)

All very interesting! however, all I would like is a tank-only battle mode! No bombs in my head would be incredible! it would be better than all these new vehicles.

I feel the same way, its the only thing holding me back from getting this. its another nation that has to rely on the ADATs or Otomatic

Funny, russian tanks are pinata for NATO tanks then. Everything can be op until its russian ye? Ka-50 and 52 its op, but there always something op, and for example in this patch Japan and US get a best jets, which US its better (again!) So US its op more time than other nations, XM1, ABRAMS SPAM (M1A2 still one of best MBTs), AH-1Z (at beginning its most biased, probably more than ka-50 and its okay?) jets like fj with atgms etc. So lmao. PPL need to learn, theres never be a balanced patch.

Polish_Satan, I am had complaint about AH-1Z back in the days also. And I will continue complaining about any extremely overpowered vehicles in the game, especially upper tiers. And I think any player who want an enjoyable gameplays experience should also do that.

Wait what? We get new gun sounds with 1.97? For everybody or only Sweden?

Turenkarn, only for Sweden : they put an Ikea Jingle after each shots, and that's kind of repeated in the far echo *troll* every thing get a nw sound, look for yourself on youtube, apparently also new flame effect, but on the video I saw, I wasn't able to spot the difference...

Any chance we'll get Danish/Norwegian vehicles in the Swedish tree? They're Scandinavian too after all, and have unique designs but not enough for their own trees

CptShadows, after the chilean chaffee only

Norwegian seems likely, the is some talk of a misc continental Europe tree (for all the countries that dont really justify a full tree by themselves) so Gaijin will probablyy hold back on Denmark until they've decided whether they plan to do that.

can we hope to see the original use of the TML 105 with the amx10rc hull or even on the Vextra hull in the french tree maybe this year?

Hope to them to, with all the prototypes and upgrade pack for the AMX-10-RC they have enough to give us on prem and many main tree variants :3 hopefully one day we will saw them.

Abaddon75, we can only hope as always

the vextra tml 105 is the french equivalent of centaro and rooikat : he can follow the Leclerc on every terrain (sand, snow road etc...)

What am i supposed to do with that vehicle as long we don´t get decent maps to play it?Put it in a shelf and watch it?

Where is Italy ifv like dardo prototipe with 60mm aubl cannon

Germany suffers we need new stuff not even the high tier stuff but there are many stuff forgoten to place in the tech tree from the WWll era, come on GJ we need some new toys G-J!!!!!

Ever tried playing another nation instead of just this one?

if you want new toys gess what : you only have tested 1 tree among 8 (9 with Sweeden), also if you had follow their stream on Dev serv Germany get 2 new toys so stop whinning, Italy get nothing and France get 3 almost copy pasted tanks...

Abaddon75, Italy gets the Centauro with a 120mm gun

Btw nothing to do with this nice vehicule, but Rooikat 105 in prem mean 120 prototype in main tree?

There was never manufactured Rooikat120 if I read the comment right there, was two types of 105 's manual loading and a 105mm autoloader.

Deadsnake_war2, ah ok, my bad, but an autoloader is enough to get 1 or 2 br (look at the Loraine and her autoloaded budys) it's maybe even better than having a 120 :) and the new turret looks so cool