The Ka-29 is an assault transport variant of the Soviet Ka-27 anti-submarine warfare helicopter, developed in the mid 1970s by the Kamov Design Bureau. Coming to War Thunder as part of the upcoming update 1.97, the Ka-29 will give fans of rotorcraft the chance to pilot a unique and no less deadly new Soviet avian predator!

Briefly: A variant of the Ka-27, fitted with a wider range of weapon options, making the Ka-29 more suitable for combating ground targets.

Development of the Ka-29 began in 1973, after engineers at the Kamov Design Bureau decided to create an attack transport variant of the Ka-27, which itself had successfully undertaken its maiden flight that year. Initially, the machine was to be designated Ka-252TB, but was later changed to Ka-29. The Ka-29 was intended to support amphibious naval operations by providing fire support for advancing troops.

After some development work, the prototype of the Ka-29 was ready for testing and conducted its maiden flight in July 1976. Testing was successfully completed by 1979, with the Ka-29 entering mass production in 1984. Shortly after, the Ka-29 entered service with the Soviet Navy in 1985, serving aboard the newly commissioned Ivan Rogov-class landing ships.

Production of the Ka-29 lasted until 1988, with about 60 units of the type being built. This helicopter saw combat in Chechnya in 2000-2001, few units  served in police special operations branches. The Ka-29 is still in service with the Russian and foreign navies, more than three decades after its initial introduction to service. 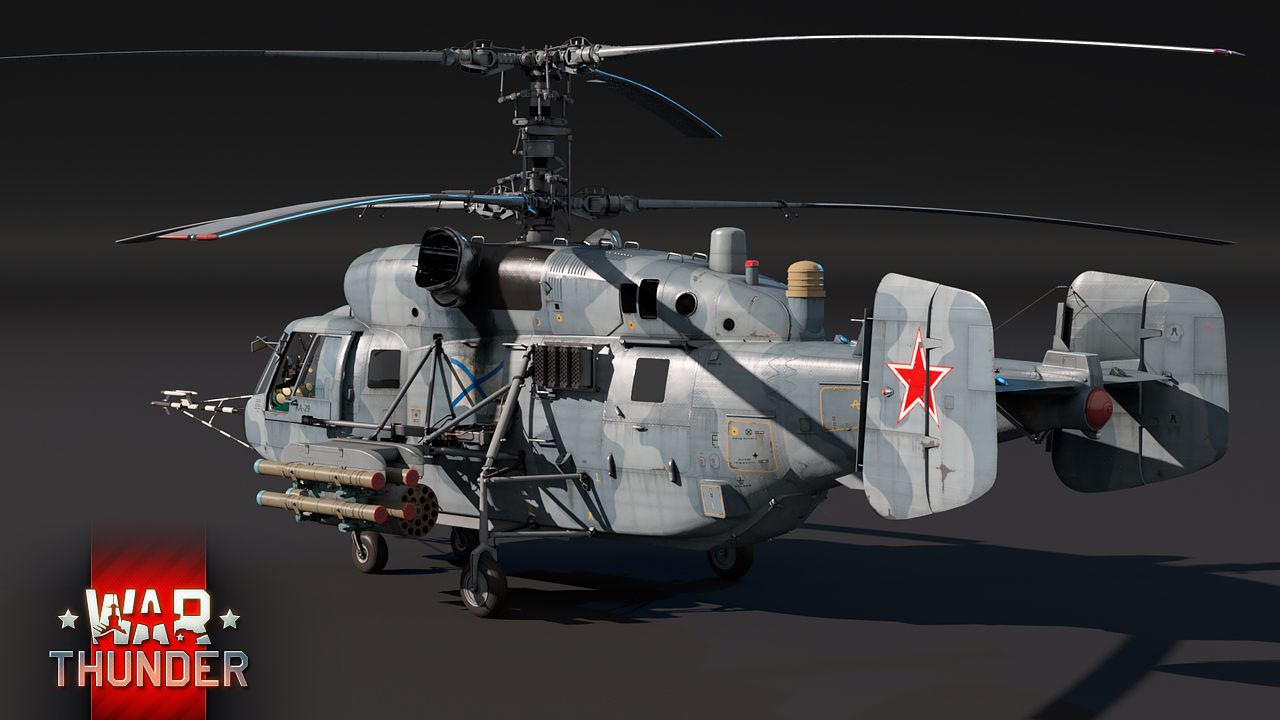 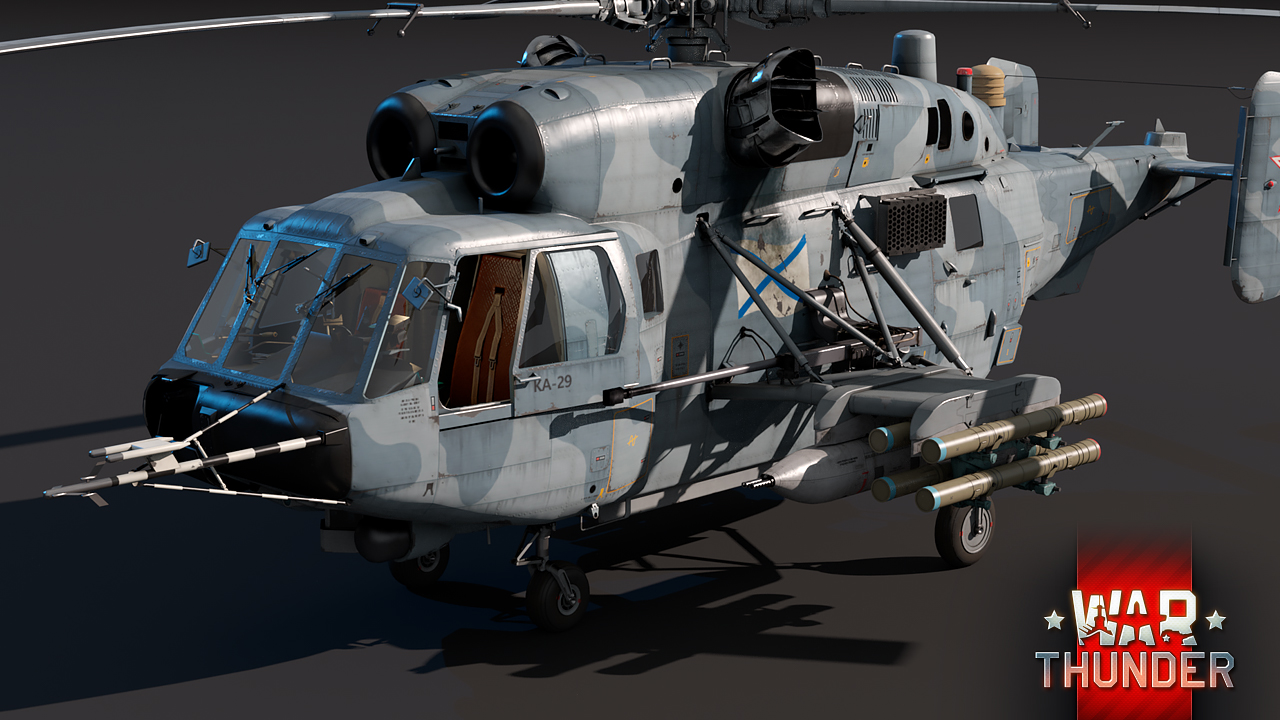 In War Thunder, the Ka-29 will be a new attack helicopter coming to Rank VI of the Soviet helicopter tree with update 1.97. In stark contrast to other Soviet rotorcraft, the Ka-29 is a much smaller, more agile and nimble machine, lacking some of the more advanced technology offered by its bigger comrades, yet still packing a formidable punch which is not to be underestimated.

The Ka-29 is powered by two Klimov TV3-117V turboshaft engines, generating a combined power output of roughly 4,380 horsepower. The engines power the Ka-29’s two three-blade coaxial rotors, which give the helicopter its unique visual appearance and allow it not only to get airborne in the first place, but also achieve a top speed of around 280 km/h at low altitude.

Although the Ka-29 doesn’t strike one as the most formidable attack helicopter in the world, it does make for a strong case in which looks can very much be deceiving. The Ka-29 comes initially armed with 80 unguided rockets, split between four external rocket pods. However, as part of the Ka-29’s researchable upgrades, players will have the chance to further outfit their Ka-29 with additional 23mm gun pods, 9M114 ‘Shturm’ ATGMs, an additional fixed 30mm cannon or a combination of these weapon systems! Lastly, the Ka-29 also comes outfitted from the start with a single 7.62mm rotary machine gun, located in the helicopter’s nose and operated manually by a crew member from the cockpit. Despite being rifle caliber and offering only limited firing angles, the machine gun can come in handy for hunting down enemy helicopters or strafing soft ground targets.

Despite the excellent flight characteristics and deadly armament, the Ka-29 does come with some caveats. Namely, the helicopter lacks some of the more advanced weapon systems and equipment featured on other Soviet helicopters of the higher ranks. Namely, the Ka-29 doesn’t have access to highly potent tandem warhead ATGMs or air-to-air missiles, the latter of which severely limits the helicopter’s ability to defend itself against aircraft or other helicopters. Furthermore, the Ka-29 doesn’t have access to thermal vision, instead being limited to only basic IR image intensifiers.

Overall, the Ka-29 makes for a fantastic choice for helicopter pilots who prefer a more hands-on approach to the action and have the skill and vigilance to avoid enemy detection by utilizing terrain features and the machine’s great agility, all the while ensuring the swift advance of allied units by supporting their teammates on the ground with precise and deadly strikes.

The Ka-29 is soon arriving to rank VI of the Soviet helicopter tree with update 1.97 and will give pilots the chance to try out a different take on Soviet rotorcraft design. In the meantime, make sure to stay tuned to the news for all the latest information surrounding the next major update coming to the game. Until then, clear skies and happy hunting pilots!

Commenting is no longer available for this news
Rules
SaekoB
63

Whilst I'm not that excited for helicopters in general, I hope you know you got 3 nation trees in the game which still lack actual helicopter line-ups, so why is time not spent on them instead of adding more and more helicopters to nations that already have trees. I would think, additions to tress would be great, but after all nations have their helicopter trees, I must be wrong - obviously.

Because the smaller nations arent profitable.

BuffDrinkLots, Yep thats why USA, Russian and Germany gets prioritised over France Italy Japan and soon Sweden after they are done with the release and sell as many premiums as they can.

Smin1080p, Why introduce helicopters then if theres such an imbalance in different nations "viable candidates"? At least keep the helicopters as their independent game mode and not have them ruin the Ground RB.

We have to play hide and seek with the tanks because War thunder is full of cowards who use the helicopter to make easy points. I no longer care to see the T90 or other modern tanks ... now I am forced to play at lower levels

Kraber255ITA, That's essentially how I feel about it and I have to thank you for putting it into words.

No T-90 this update. Also Helicopter and Ship development has nothing to do with tank development, so there does not have to be "no more" of them for more tanks to come.

Smin1080p, That makes sense, can you maybe comment on if Russia will get an MBT at all this patch? Russia has not had an MBT in 5 patches.

Will Italy, Japan and Germany get some love too?

Germany is too weak, we need leopard2A6 or more

LPACE, german players do not complain to Germany ,to support other countries :P

we have enough Russian helicopters in the game, in my opinion you should not add things to the trees that are already healthy and focus on the ones that need attention like Italian and Japanese helis, French and Italian planes, Japanese tanks etc.

Yah, btw are we getting some Mystere IV because the Mystere II are ok but not great and they were in service less than 2 years irl, where the Mystere IV were in service for almost 30 years and were more comparable Sabres / CL13 and had some interesting developments even if they never ended up in production because ofSuper Mystere and Sabre Dog, these protoypes could be great.

2 devblogs in a matter of 1-2 hours, wow. You guys are fast. How many more today?

It's never been more than two, so you may stop holding your breath already. Unless you don't coun't map announcement as real devblog.

Alex_LT, No, I'm sure they were posting devblogs in Saturday, during earlier patches. I think, they never post anything in Sunday tho.

They said the update will have around 60 new vehicles. So they have to make fast devblogs

MenkoBeast, that its relative cuz when they put the Eternant was a whole surprise what there's no devblog of him

They look so small from up here

Helix on the scene

Make room for the Nuclear Bomb!

Will there be a premium cruiser for Japan in this update?

there are already 3 apaches in the game files 1 for u.s 1 for britain and a israeli premium apache.

Lmao bro! Imma bought to be put on life support any moment now.

Great. Just what high tier needs. More helis that will ruin the game. At least change back to how helis was at their launch. When they could only spawn with dumb ordinance(rockets/bombs/guns) And increase their spawn cost if they want to carry mouse controlled ordinance. SPAAM's wont fix this problem. Since not every one of them are even close to be equal. And many of us play GFRB/SB to play ground vehicles. And fight other ground vehicles. Its so fun to die before you get 100m away from spawn!!

Also make it less profitable to play helis in GF RB/SB. Give them a better game mode where they can play. Instead of ruining GF. Since the main focus of GF RB/SB should be ground vehicles. And not airplanes/helicopters.

did you all notice they say they let helis start a game because they can land and capture a zone yet it has been shown a plane can do it as well yet they cant start... Also in the heli only mode why is it you no longer have zones for them to land and capture? why none, WHY?