The Rooikat 105 is a further development of the South African Rooikat armored fighting vehicle, developed in the mid 1990s with the intention of upgunning the design’s base model. Soon, War Thunder tankers will have the chance to add this South African gem to their in-game collection, following its arrival with update 1.97!

Briefly: An upgunned version of the Rooikat AFV, featuring improved firepower thanks to the presence of a larger 105mm main gun.

After the Rooikat 76 entered production in the early 1990s, South African engineers continued developing the vehicle in an effort to further expand upon its capabilities. As such, the engineers decided to, among other minor changes and improvements, fit the Rooikat with a larger 105mm cannon, thus creating the Rooikat 105 in the process.

Development of the Rooikat 105 was completed in 1994 and a single prototype was built. However, after demonstrating the vehicle to the SANDF, the military decided not to procure the improved version of the Rooikat, given that they were already more than content with the base model of the vehicle.

As a result, the Rooikat 105 was subsequently offered on the export market in an effort to secure orders for the vehicles. However, despite its 105mm cannon and compatibility with most NATO rounds, the Rooikat 105 failed to attract the interest of any potential foreign customers. In the end, only a single prototype of the Rooikat 105 was constructed, with the vehicle never entering production due to lacking demand. 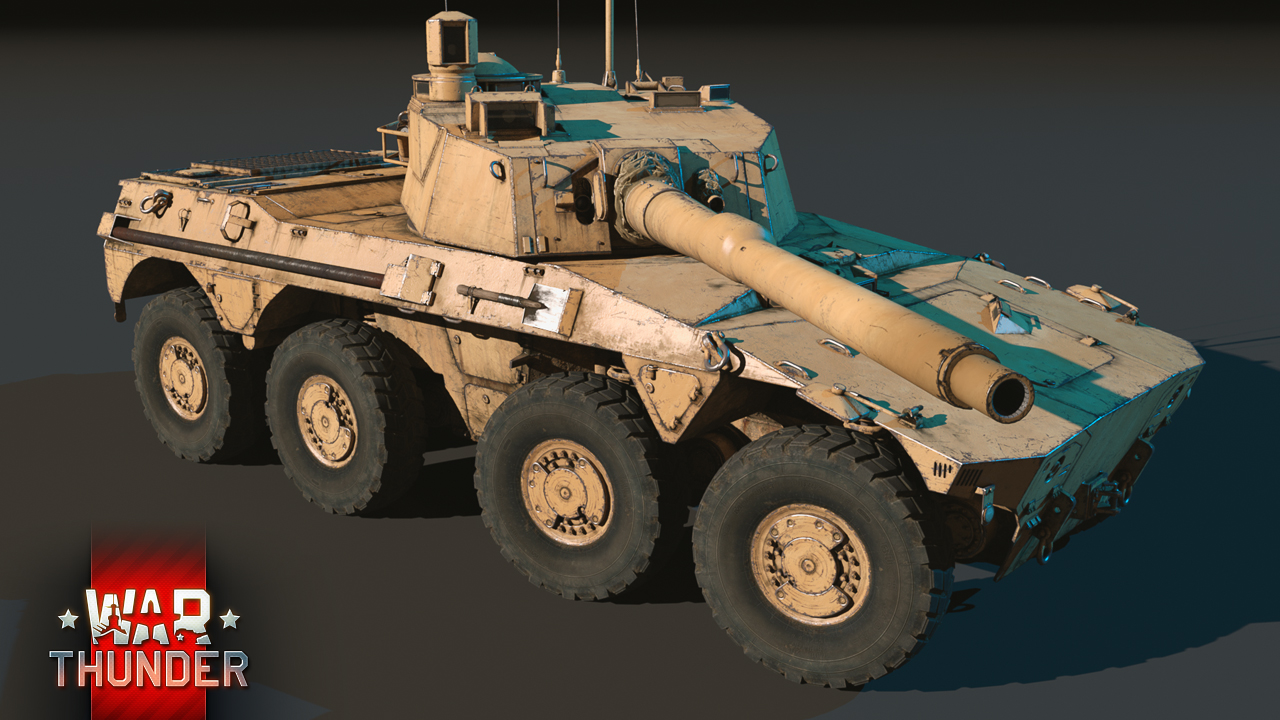 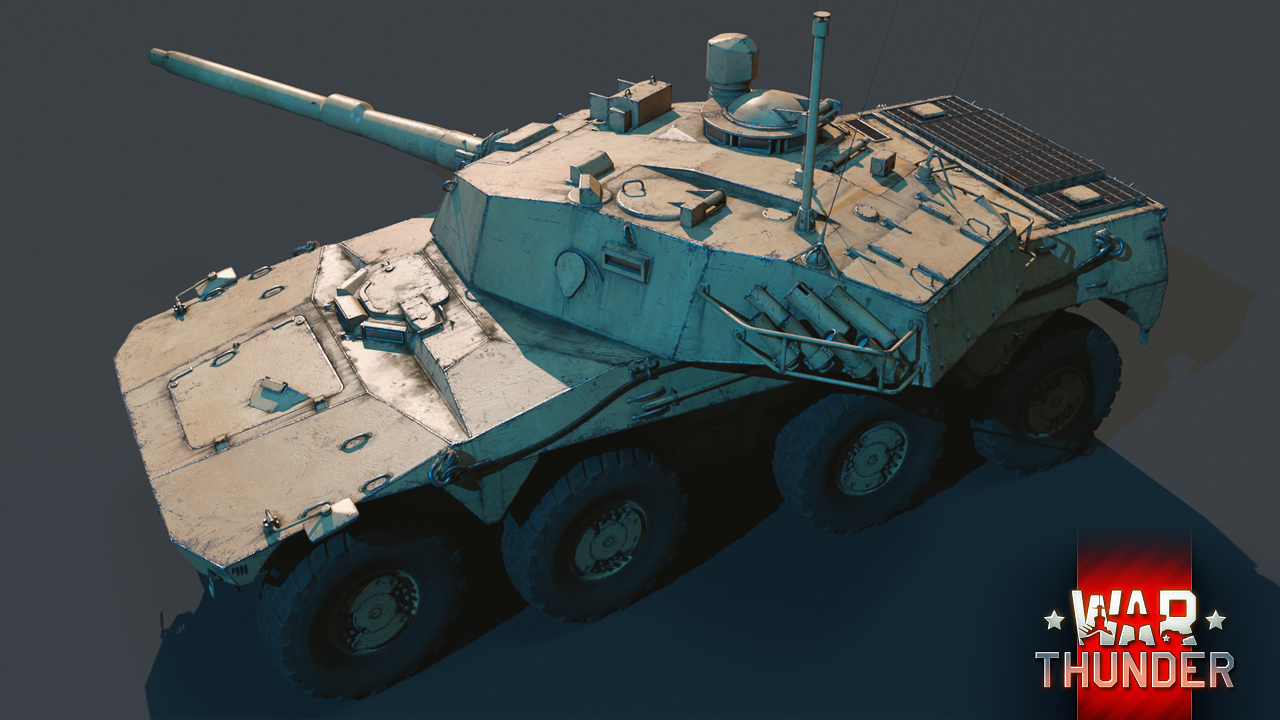 In War Thunder, the Rooikat 105 will be a new rank VI premium vehicle, available for purchase to British tankers, following the release of the upcoming major update 1.97. Being in essence a response to tankers who weren’t impressed enough by the standard Rooikat 76, the Rooikat 105 takes all the qualities from its predecessor and combines them with a larger and punchier 105mm cannon, while earning your more rewards for each action in combat thanks to its premium status!

As already mentioned, the most notable difference of the Rooikat 105 as opposed to the Rooikat 76, which tankers had a chance to familiarize themselves with since the release of the previous update, is its larger 105mm GT-7 cannon. Comparable in ballistics to some of the other nations’ counterparts, the GT-7 is capable of firing most of the common 105mm NATO rounds, ranging from various sub-caliber to chemical rounds.

However, all these upgrades do come at somewhat of a price, unsurprisingly. For instance, due to the mounting of a larger gun and slightly increased dimensions of the hull, the Rooikat gained additional weight, while its power plant remained the same.

As a result, tankers won’t just have a bigger cannon to shoot with, but also a greatly expanded ammunition selection with the Rooikat 105, as opposed to its predecessor.  Furthermore, aspiring owners of this machine may look forward to the addition of thermal imaging sights on the Rooikat 105, which will make target acquisition in both day and night-time conditions easier and will open up more tactical options in combat.

Commenting is no longer available for this news
Rules
TuboThePanda
131

can you guys stop doing this already, can you seriously stop making premiums just better than the tech tree equivalant? it's getting old. like make top-tier premiums if you want but there's no need to just make them a better version than something in the techtree. can you at least be creative about it? come on.

Just let gaijin further ruin their game if they want to. ''Listening to the community'' HA! like that's ever gonna happen

War_Gaming_RUS, Yes, it´s a bad decision to add the 105 Rooikat as a premium. In the hands of an experienced player (with a complete line up), this would be a good addition to the regular tech tree (GB can finally rush cap points). But because of the ridiculous hull break mechanic, bad off-road mobility (in 5 mm snow/mud), bad ability to climb hills,... a newcomer will be angry about his 60€-premium soon. The wheeled tanks aren’t easy to play!

76mm version is not an "equivalent". It's a different vehicle with lower BR.

gromvoiny, no - it's worse. Britain doesn't have a light tank line so selling a vehicle that should be a TECH TREE vehicle is extremely scummy. It's barely a different vehicle so stop making that excuse. Why are (gaijin) so against giving Britain light armoured vehicles without a paywall?! It's unacceptable. I'm normally fully in support of Gaijin and the decisions made, but this is a bridge too far. I do hope you have other vehicles fro the British for this patch, especially something light.

War_Gaming_RUS, considering its both technically a prototype tank and the rooikat is an oddity in general i really have no f***s to give about your whining

can't wait for it to be at the same BR as the tech tree one tbh. i realy wished that one was in the tech tree and not an expensive premium

For all intents and purposes this is practically a Type 16, only with different looks... That one is BR 9.3, so it would be pretty unfair if this was lower...

Turenkarn, I want to point out type16 has 1080p resolution CITV. And no, it is not a minor difference. Being able to clearly spot any thermal signature and IDENTIFY them from 5KM+ away is a HUGE advantage. I have type16 fully spaded and it is a big asset as a scout for your team. you sometimes don't even need to fire your own gun to win the round for your team by pinning flankers on the minimap.

Prems back in the day used to be unortodox stuff that did´t fit the main tree, most of the time they were not even better then the main tree ones But now we get all of these prems that are meta, L/44, T55AM, MTCA, AMX 30 S, XM-1, KA-50, Internationell, G-LYNX, Prem saber:s & mig 15:s and so on... It´s to late to take them out now, balence is already broken they won´t be fixed as wallet warriors get there place in front as they paid for them... as do TT ppl. Welcome to PREMIUM Thunder (8.3

I made a drastic choice as boycott. WT not worth it past 6.7 for tanks and 7.3 for planes. I don't play above those BR anymore.

You clearly forgot one of the first premiums in game, The Fw 190 D-13. Superior to the tech tree equivalent and the most over powered vehicle in game for nearly a full year straight from Patch 1.25 through 1.31 where it finally was put down. What about the US premium Spitfire getting 150 Octane Fuel but not the British one despite being the same tier (modern day BR)? There are many vehicles in the past that are just like that. You just have seemed to have forgotten.

Ahahhahahahah! I'm a bit sad it's premium furball... As British lack of light tanks and clearly it would have been nice to get it in tech tree. Also, the add of thermal from premium version seems a bit unfair. But hey... if it can boost back british line up... :) Hope to see more challenger mates ;p

It might be a little Kitten. But its bite will still hurt :)

Really your making it a premium ??? Why not put it in the British tech tree after the first rooikat ?

Only 1 of these was ever made. There are plenty of better candidates of production vehicles for the main tree.

Smin1080p, Then why not add those instead of ANOTHER one of these as a better Premium alternative? Maybe you could have added this a few updates from now, not right after the other one was added. But hey, its Gaijin, so we all knew you guys would do something like this....again.

Though no clue if this is their plan or not. But the 76mm Rooikat fits in a weird-place in the British armoured history (well it isn't even native British anyway...) and would fit lovely in the tree if they add indigenous vehicles before and after it. As Britain has many 105mm capable Light tanks and armoured cars. But very little 76mm HV's where the Rooikat sits.

Why are you giving a pound for pound, Better! thing for money... (IK its business but) You could've: A)Given it as the next vehicle folded with the 76 Rooikat. B)Made the 76 Rooikat as a prem and this in the normal tree. C)Made something completely else as a prem. I don't like you taking away present prems even if they aren't selling anymore, keep them still! in the shops so maybe, someone, someday, will buy it eventually!

Or... Or... Do what good companies that don't scam their base would do! Make a premium version that is the same as the TT version but just with a different skin...

xenoniuss, that would get JUST as much backlash as this and you know it

War_Gaming_RUS, That's just childish. Arcade players still have to put up with premiums, same as the rest of us.

Shame it's a premium, I love my Rooikat and I'd have loved a better and meaner one. Still, though, more wheeled AFVs are nice, they're super fun.

I remember when premiums were whacky collector tanks or tanks with different gameplay. Not a tank that's better and upgraded version of it's tech tree variant. You're killing your own game Gaijin, please notice this. Your game is falling apart due to massive spaghetti code issues, the servers are probably the worst I've seen in modern gaming and I am including the F2P FPS games. Your monetization scheme is getting worse by the hour. Don't kill this game for the sake of milking money.

Yeah, noodle coding with meatballs. Meatballs are the subroutines from the old game that they had 10 years ago. Total closterfk.

Clear sign of noodle coding: you modify something and as a result break something that is unrelated. Gaijin: changes 1 thing and breaks 3 other unrelated things.