News
back to news
Development
2 March 2020

Lightning F.6: Saddled to a Skyrocket!

The English Electric Lightning is a British supersonic Cold War jet fighter and remains to date one of the few British domestically built aircraft, capable of reaching Mach 2. War Thunder pilots may look forward to the arrival of the long awaited and much anticipated Lightning, coming soon to the game with update 1.97!

Briefly: A highly capable British jet fighter of the late 1950s, designed to reach speeds in excess of Mach 2!

While the first prototypes of the Lightning (P.1A) were designed to reach speeds of around Mach 1.5, in 1952, the decision was made to further develop a second batch of prototypes (P.1B), capable of reaching speeds of Mach 2. In August 1954, the P.1A prototype first took to the skies for its maiden flight, while the P.1B conducted its first flight in April 1957 and as the first British aircraft, reached speeds of Mach 2 in November.

Following a successful test phase, the Lightning was ordered into production and subsequently entered service with the RAF in 1959. The aircraft served throughout the Cold War period - until 1988 - with many variants being created which improved the Lightning’s performance further, most notably increasing its originally very limited range.

With the advent of far more capable aircraft in the late stages of the Cold War, the over 330 Lightnings built were phased out of service in the late 1980s. Apart from its service with the UK, the Lightning also served with the armed forces of Kuwait and Saudi Arabia, the latter two being its only foreign operators. 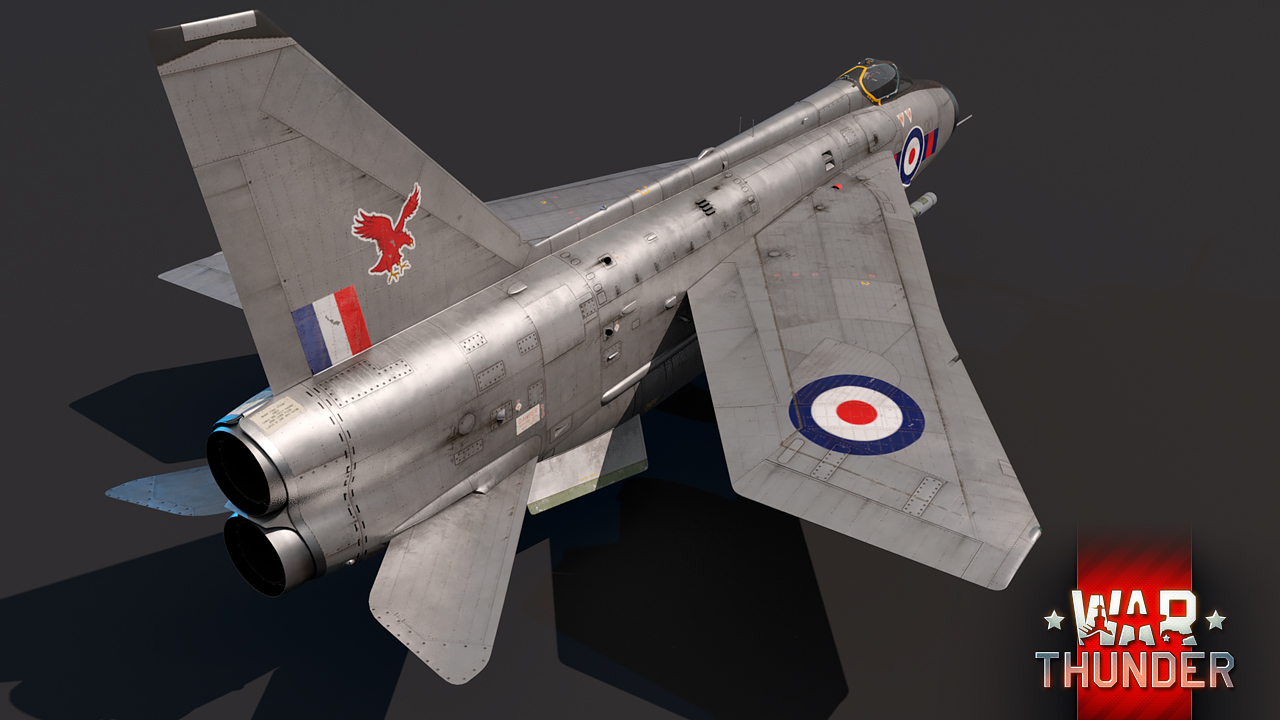 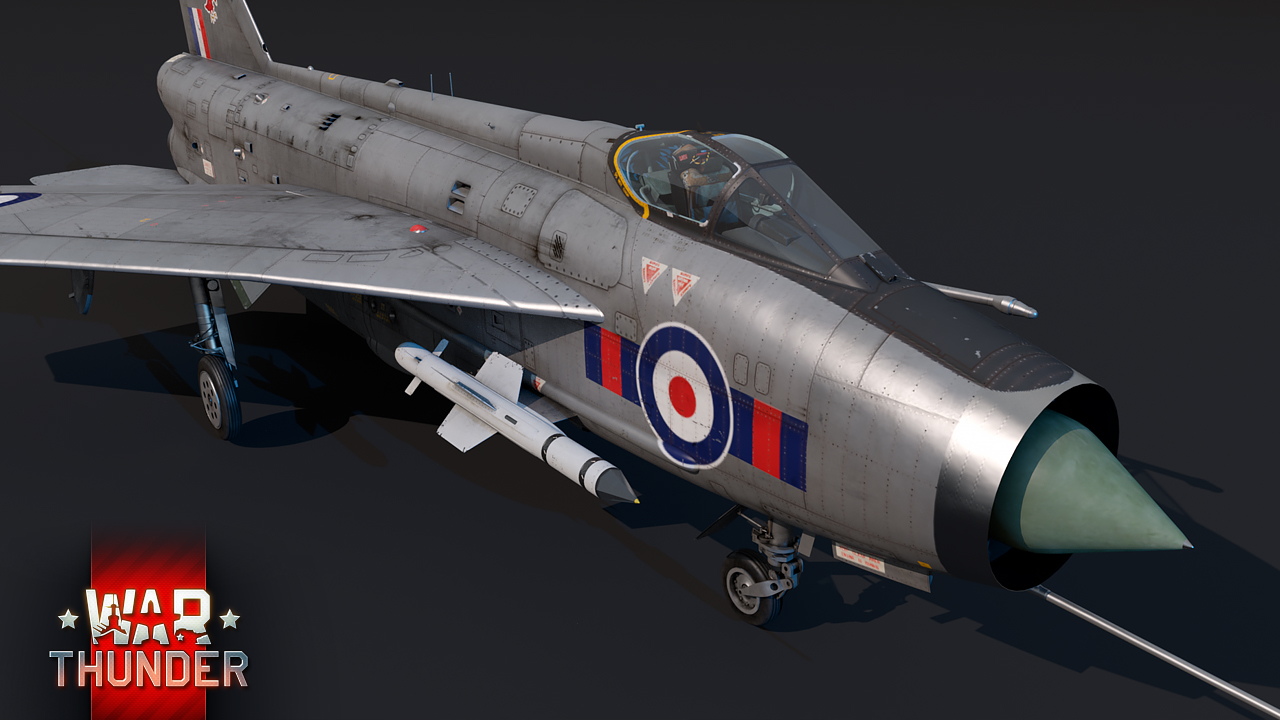 Fun fact: RAF pilots recalled their experience of piloting the Lightning as “being saddled to a skyrocket”, due to her incredible climb rate.

In War Thunder, the highly anticipated Lightning will be a new jet fighter, arriving at rank VI of the British aviation tree. Coming to the game in the form of one of its later variants, the sleek Lightning F.6 will await seasoned British aviators in the upcoming update 1.97 as the new crowning jewel of the British aviation tree! Ready to find out more? Then strap yourself in as we set takeoff thrust on the showcase for this shiny new silver bullet, arriving to your hangar very soon!

The Lightning features a unique staggered engine configuration of its two Rolls-Royce Avon 302R turbojet engines. This means that one of the turbojets is situated more towards the nose of the aircraft, while the other is fitted more towards the back of the airframe. Apart from this, the two turbojets are also mounted on top of each other, giving the Lightning a very unique and distinctive visual appearance.

Despite its rather considerable size, the Lightning F.6 truly deserved the name given to it. Thanks to its two afterburning turbojet engines, generating a staggering 72.8 kN of thrust with the afterburner engaged, the Lightning F.6 can reach a top speed of Mach 2.1 (1,556 mph / 2,505 km/h) at an altitude of 39,300 ft (12,000 m), making it one of the fastest machines in War Thunder!

Apart from a mind-boggling top speed, the Lightning F.6 also boasts impressive levels of acceleration and a climb rate. Thanks to these qualities, the Lightning F.6 is ideally suited for the combat conditions present at top rank battles and offers an ideal platform for hotshot pilots to prove their mettle in the heat of combat. Just watch out for those pesky IR-guided air-to air missiles!

Speaking of AAMs, why not chat about the Lightning’s own armament? When pilots first obtain the Lightning F.6, they will be greeted by a standard armament loadout consisting of two 30mm ADEN cannons with an ammunition complement of 120 rounds per gun. Due to the fast rate of fire of the lethal ADEN cannons, 120 rounds per barrel is a rather limited amount of lead to play around with. As such, aspiring pilots will need to demonstrate good trigger discipline and sharpshooter-like precision  in order to make the most out of the Lightning’s standard weaponry.

However, another spot of good news is that pilots won’t need to solely rely on their guns to do all the dirty work for them. Instead, pilots can unlock the option to further equip their Lightning with either Firestreak or Red Top air-to-air missiles, the latter of which is a new IR-guided missile, coming to the game with the Lightning F.6.

The Lightning F.6 is coming soon to War Thunder as the new top jet fighter of the British aviation tree with the release of the upcoming update 1.97. In the meantime, make sure to stay tuned to the news for more information regarding the next major update. Until then, clear skies pilots!

Commenting is no longer available for this news
Rules
WT_CT_Center
50

Hope the brits are happy now then :)

Turenkarn, This is a baby engine or it's fat :)

Poor Italy, no helicopter tree, no mach 1 or 2 jets.

Dozer15, Poor player base. Most people struggle to get jets, high tier tanks. A lot of people are not there yet. The reward model on the Silver Lions per match was reworked when everyone was complaining about FPE on tanks. But the problems persist. _________Wanna do jets...you're gonna lose money at least 10K on jet per match till you adjust or deal with the head on people. Bombers? Jets will mess you up. Huh one of the tips Gaijin has was basically 'consider this a job'. You just got to grind away.

Yes british get a mach 2+ jet airplane and france nothing yeah :D

Stop it. Get some help.

France just received the Etendard and is also receiving the long requested AMX 32 this update. They do indeed get something :)

Smin1080p, the site didnt show us anything about this french plane ...

my plane line up is called RULE BRITANNIA

Yes! Thank you very much gaijin... now I climb to space :P

Nope, just impressive. Well, it is high indeed, but Phantom's stil slightly higher. Thrust goes rocket-like only on start, and then keeps around 140 meters per minite, or smth like that (AFAIK of course)

Borisych, Cheers, According to my 1976 combat aircraft book, the Phantom(s) only have a 28 to 32000 ft/min initial climb unlike the lightning that had an "unbelievable" 50000 ft/min initial climb which is still respectable for today's modern fighters and it could break Mach 1 in a climb. We even had a special one that could catch the U2 spy plane. Sorry I don't do Meters/sec.

Teaboo's can drink to this, finally

im not gonna drink to that. in fact im a bit worried this may break the game to an unfixable state. if not unplayable.

teodor99, Italy doesn't have a mach 1, games been unbalanced bro