The Pvrbv 551 is a Swedish anti-tank missile carrier, developed in the early 1980’s on the basis of the outdated Ikv 103 SPG’s. Arriving in War Thunder with update 1.97 ‘Viking Fury’, the Pvrbv 551 will await all eager tankers at the higher ranks of the new Swedish ground forces tree coming to the game very soon!

Briefly: An older Swedish SPG converted and modified into a modern tank hunter, armed with the Swedish version of the TOW anti-tank guided missile.

During the 1970’s, the Swedish military came to realize that their anti-tank and anti-air regiments within the armored branch were substantially lacking in mobility and protection. As a result, studies were initiated in an effort to find potential solutions to this problem.

During the conducted studies, it was found that the previously decommissioned Ikv 102 and 103 SPG’s could relatively easily be converted into mobile ATGM and SAM platforms. This sparked the development of several projects in the late 1970’s, all of which aimed to convert the old chassis into modern missile carriers.

By the early 1980’s, the viability of this undertaking had already successfully been proven through the creation of several prototypes. However, the decision was then made to not simply convert the old chassis, but to substantially rebuild them in order to facilitate necessary improvements.

By the mid 1980’s, the work was considered complete and two new vehicles were developed as a result - the Pvrbv 551 and Lvrbv 701 - the former being the ATGM carrier, whereas the latter represented the SAM variant. Both vehicles subsequently entered service with the Swedish military in the mid to late 1980’s.

In total, 57 Ikv 103s were converted into the Pvrbv 551 missile carriers, which served with the Swedish military from 1984 until 2000, when the last of the operational units was retired from service. 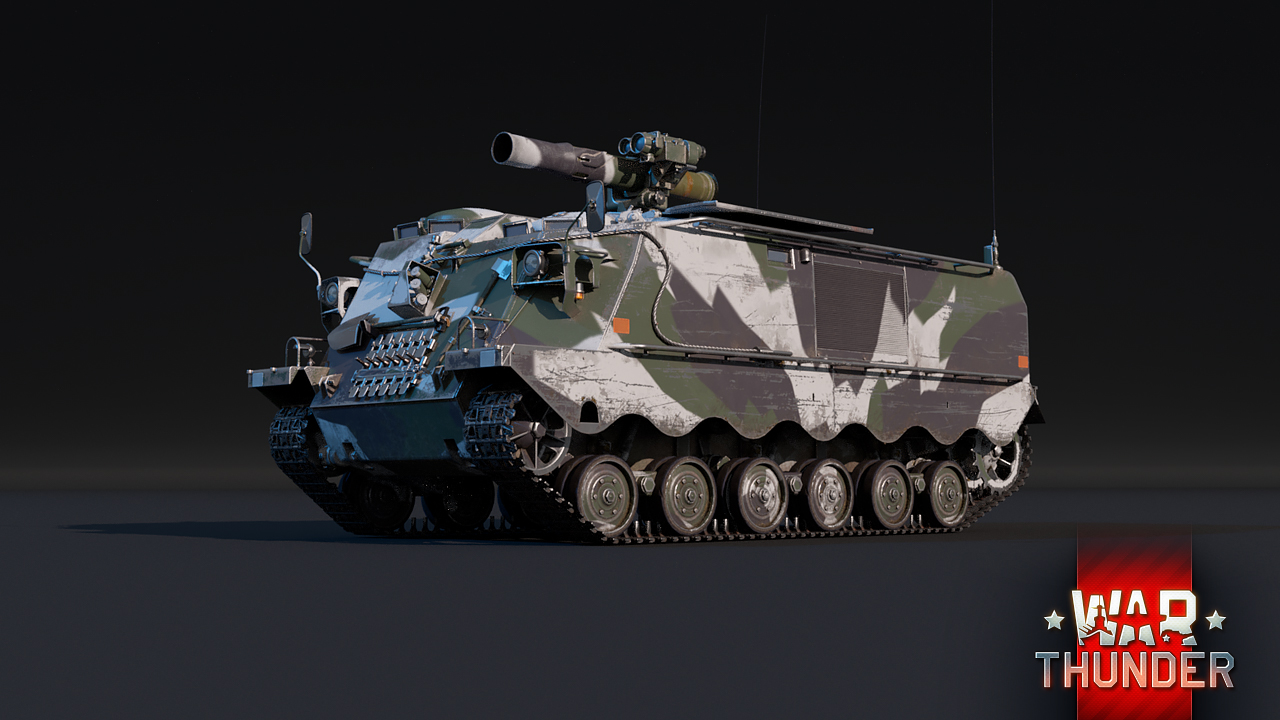 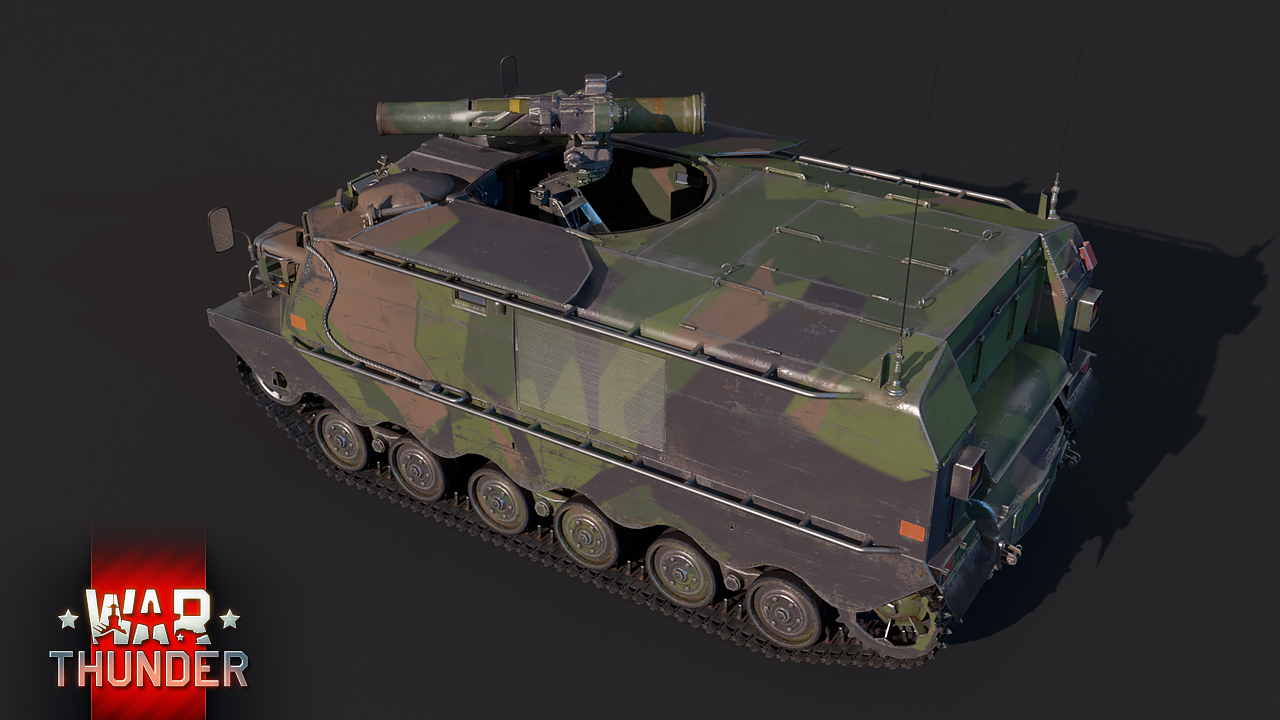 Thanks to a combination of its deadly TOW ATGMs and low profile, the Pvrbv 551 makes for the perfect tank hunter for high tier battles and a suitable choice for holding down strategic positions and defending objectives.

The Pvrbv 551 is armed with a single TOW launcher as its one and only means of engaging hostile threats. While capable of piercing the armor of most opponents lacking in additional dynamic protection, aspiring commanders of the Pvrbv 551 will need to absolutely make every shot count due to the vehicle’s limited ammunition count! Namely, the Pvrbv 551 can only fire off a total of 8 TOW missiles before commanders need to seriously consider heading down to the nearest blue-colored resupply station.

Furthermore, the Pvrbv 551 is very much a defensive vehicle and can’t effectively be played in an aggressive manner due to the fact that it can only fire its TOW missiles when completely stationary! As a result, the Pvrbv 551 performs best when used to cover strategic positions to slow down advancing enemy forces as well as defending allied objectives from enemy attack.

Another aspect that relegates the Pvrbv 551 to a more defensive role is its rather lackluster mobility. Namely, being powered by a 136 horsepower gasoline engine, the Pvrbv 551 is only able to achieve a top speed of 41 km/h on roads, while its average offroad speed lies around 30 km/h. As a result, tankers simply won’t have the necessary mobility to get to frontline positions fast enough before the fighting starts, meaning they’re better off settling for a comfortable position in the second line - ready to counter a potential enemy breakthrough.

Lastly, the Pvrbv 551 armor - going up to 25 mm at its strongest - is more of symbolic nature, rather than providing any effective protection. Useful only against machine gun fire and shrapnel, aspiring commanders of the Pvrbv 551 are well advised to better take advantage of the vehicle’s small dimensions and low profile to conceal themselves from the enemy. Furthermore, the vehicle features a partially exposed fighting compartment, meaning that it’s best to avoid seeking unwanted attention in the first place - especially from hostile aircraft circling above the battlefield.

Commenting is no longer available for this news
Rules
Antezscar
20

have you caught all the dev and server hamsters yet?

It's on the way! On a serious note, we had a lot of dev server reports and the devs are working on them.

Ouiche, you'd better give us a free hamster decal for the delay ;)

Will Sweden ever get a King Tiger as a premium? Here's a little info why I'm asking for it https://youtu.be/3nIPCULX23Q

Well, Sweden is going to severely lack heavy tanks. Maybe a premium option would be nice.

They never used it. Just a target practice vehicle.

pls Gaijin i need a CV 90120 Devblog so i have a good Picture for my Desktop Wallpaper:)

Theres been one already!

here's childish solution to your childish demand...get some paper and crayons, draw your own and tape it over your screen. Sorted? Good.

Look, devs. I love this game. I've spent years playing it, and I LOVE playing it. But no matter what problems tanks or planes may have had, there has never been ANYTHING as unbalanced as helicopters. For the love of god, just remove airspawns with ATGMs.

ähm this issue was adressed and will be fixed with the release of 1.97 Read the preliminary patch notes

Pacifica, And will then 3rd dev server .

wow so many devblogs, i guess now is the time to drop the patch announcement

There is still a third map and the German light wheeled vehicle :D and since moderators are saying that the update will come soon, or sooner than soon, means we still get atleast one or two dev blogs, which are, I think, last ones seeing what was shown on stream. Though, this vehicle was unexpected, something that I didn't saw in any stream (Eng and Rus ones).

look like a promising unsusual tank, but it clearly is too hogh at 9.0 on the current state, to be at this br, it needs a tow II at the very least. Update this week? or if not, maybe a little dev server to make us waiting for next week?

There are definitely times when Gaijin deserves our criticism. however if you went and took time off from work because your crystal ball told you the update was coming and now you're angry at Gaijin for it not being here, that is not one of those times where they deserve it. If you took time off from work that's completely on you and possibly seek some help.