The U-SH 405 is an experimental tank destroyer, developed by the Swedish Landsverk company in cooperation with Daimler-Benz in the late 1950’s. Soon, tankers will have the chance to meet this highly interesting machine on the War Thunder battlefields in update 1.97 ‘Viking Fury’!

Development of the U-SH 405 began in the late 1950’s, after Landsverk and Daimler-Benz formed a cooperation to further develop the Unimog 404 truck into a family of different military vehicles, ranging from APCs to dedicated tank hunters. Development was initially headed by the Germans, but in 1958, Landsverk took over the lead role in its development.

As part of the ongoing development, Landsverk came up with a dedicated tank hunter variant of the vehicle in 1960, fitted with a pair of Oerlikon 81mm rocket launchers, originally developed for aircraft and helicopter use. A single prototype of the machine was built and trialed, but no production orders were issued.

However, the APC version of the U-SH 405 saw more success, being ordered by the Belgian armed forces in limited numbers. Despite placing an order for around two dozen vehicles, due to various geopolitical reasons, Belgium only received fewer than half of the machines initially ordered. The remainder of the machines built, but not shipped to Belgium were later on sold to the Irish military in the early 1970’s, which used the vehicle until 1978 before retiring it. 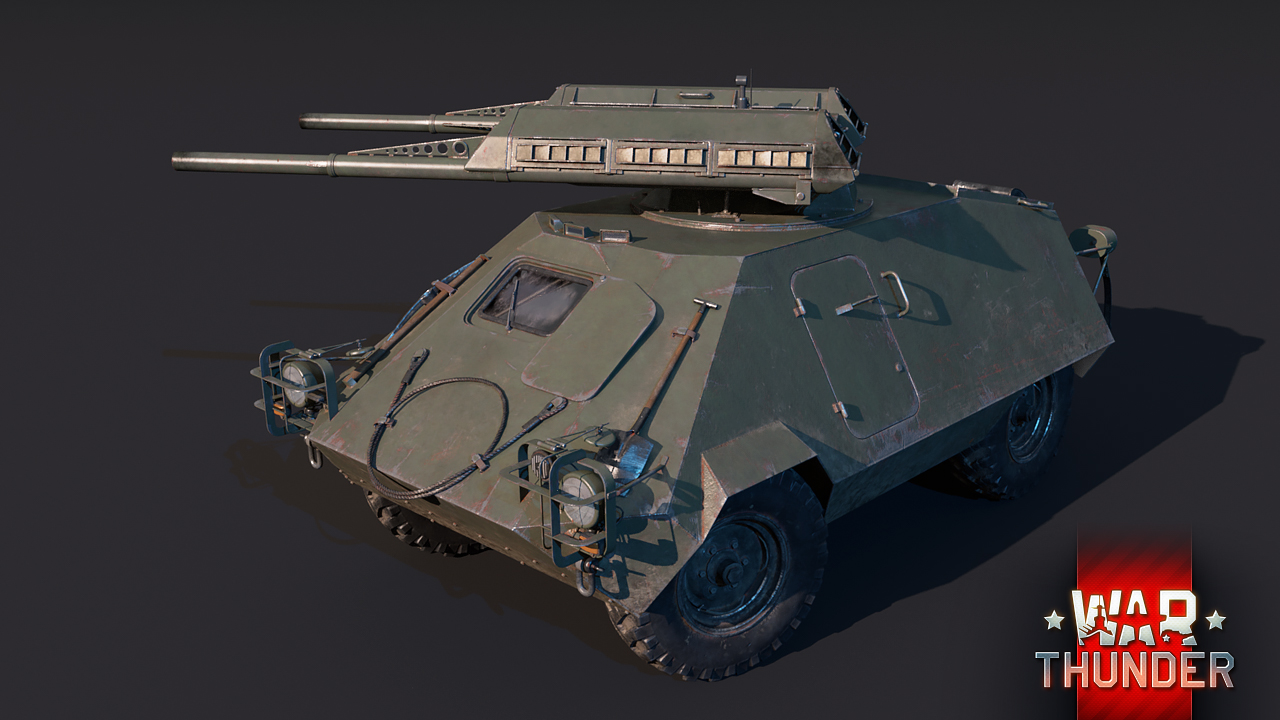 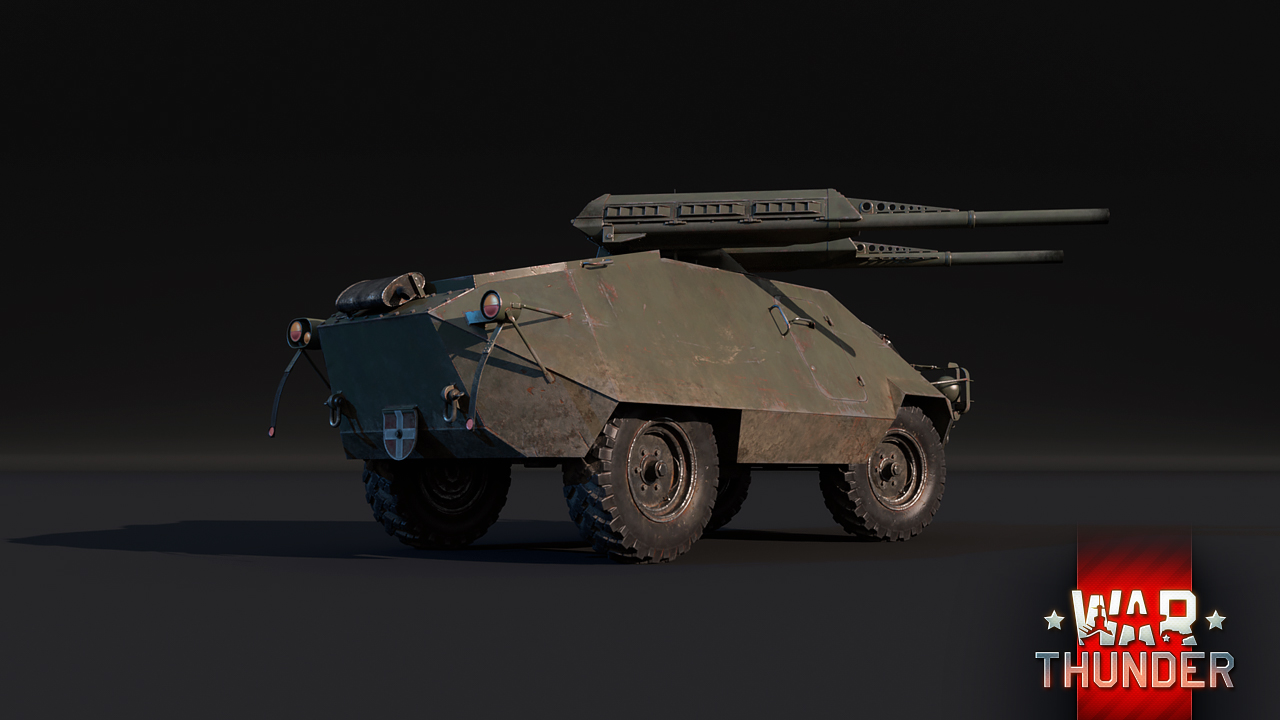 In War Thunder, the U-SH 405 will be one of the many new vehicles awaiting tankers in the brand new Swedish ground forces tree, coming to the game as part of the upcoming update 1.97 ‘Viking Fury’! Specifically, the U-SH 405 is a highly interesting Swedish Rank IV tank destroyer, packing a sizable punch for its size!

Visually somewhat reminiscent of the familiar Italian R3 T106, the U-SH 405 is also armed with a set of rather unusual weapons. Unlike its Mediterranean counterpart, the U-SH 405 isn’t armed with two recoilless guns, but instead, with two 81mm rocket launchers. Despite it not seeming like it at first glance, the U-SH 405 does indeed fire unguided rockets instead of more conventional munition types.

While not being the first ground vehicle in the game to be armed with unguided rockets, the U-SH 405 is certainly the first of such vehicles to utilize rockets with a shaped charge warhead as its primary means of dealing with its opponents. In fact, thanks to their high penetrating power, the 81mm rockets are powerful enough to pierce the armor of tanks several ranks higher than the U-SH 405’s own rank.

Unlike ATGM’s however, these rockets can’t be precisely guided to their target but will instead have to be aimed more like conventional cannon rounds, albeit with much more favorable ballistic properties.

Fun Fact: The Oerlikon 81 mm rocket launcher found on the U-SH 405 was initially developed for use on aircraft and helicopters.

Despite the fact that the U-SH 405 can reach a maximum top speed of 80 km/h on roads, its overall mobility does leave some things to be desired. Being powered by a 90 horsepower gasoline engine and weighing in at 5.7 tons, the U-SH 405 has a rather lackluster power to weight ratio of just 15.7 hp/t. As a result, its offroad capabilities are limited, being only able to reach speeds of 30 - 35 km/h cross country as well as just 10 km/h in reverse.

Additionally, being based off a small truck chassis meant that engineers were left with little room to play with as far as the vehicle’s armor protection was concerned. As a result, the U-SH 405 features just 10mm of armor plating at most - enough to stop only rifle caliber fire and shrapnel from damaging the vehicle and its crew. For the same reason however, the U-SH 405 also has very small dimensions and as such, offers a very small silhouette for enemies to make out in the heat of combat, thus making it the perfect pick for stealthy surprise attacks!

The U-SH 405 comes to War Thunder as a Rank IV tank destroyer of the brand new Swedish ground forces tree, arriving to the game as part of update 1.97 ‘Viking Fury’. In the meantime, stay sharp and keep a close watch on the news for more information regarding the next major update coming to the game very soon. Until then, happy hunting tankers!

Commenting is no longer available for this news
Rules
Trymsiboy
35

Ffs, i cant be the only one refreshing the warthunder website and youtube channel, just waiting for the update devblog and the 1.97 official trailer....

you are not the only one

You really are not the only one. I have not been so excited for an update since the Dev Server for the Italian Ground Forces update.

Cat_Clan_Leader, And what about buying anything from in game still not working? Is that being fixed in this update?

kinda feel like this is another situation like the lorraine or the object 906 where it doesn't really matter what br you put it at as it will do well at any br. for better or worse of course, definately something to look forwards to. nice one gaijin

Not that soon. Our major update release candidate hamsters started to run in the opposite direction last night, turn out, this is generating a negative amount of commits and might deconstruct our entire reality. We're getting them back in the right direction but they are really stubborn and got a good union, so yeah.

and another prototype in the regular tree...

Buu huuu, go play another game when this is what you don't like about War Thunder. Prototype vehicles were on regular tech-tree literally since the beginning of this game

TheAntiAirGuy, and i would have less a problem with them if gaijin dont add mass produced stuff at the same time as prem/event only. Buu huuu

Not so good for chopping down forests, however.

Conte_Baracca, That's because it can't be done.

could have sworn it's the 11th today

You are not wrong!

Please balance 10.3 in this patch, is impossible to play with german team against russians, ka-50 kills everyone and german AA can't kill them, and american tree needs a decent premium attack helicopter, give us a premium apache please.

Rather they are nerfing all atgm helicopters which is good

They are nerfing the ka-50

not even this week.

Hey Gaijin! What’s up with the AH-64A Peten on the PC? Is it going to be a console exclusive? Will it be ready in time for 1.97?

We need to know this. I'm gonna be super salty if they make the Peten a console exclusive.