HMS London is a heavy cruiser of the British County-class, second group, designed and built in the interwar years around the restrictions imposed by the Washington Naval Treaty. Captains may look forward to the arrival of HMS London as the first 8’’ gun-armed British cruiser to make its way to War Thunder as part of the upcoming update 1.97 “Viking Fury”!

The County-class cruisers, also known as the A-Type cruisers, were the first British cruiser vessels to be developed in the interwar period of the 1920s. Their design being heavily influenced by the restrictions imposed by the Washington Naval Treaty, meant that British shipbuilders had to find compromises during development in order to comply with the treaty as well as to meet the requirements of the Royal Navy for a ship capable of trade route protection.

This resulted in the creation of a ship design with good cruising range and adequate firepower, but very light armour protection in order to stay within treaty restrictions. The orders for the first ships were placed in the mid 1920’s and construction began in 1924.

HMS London (C69) was laid down in February 1926 and commissioned into service in January 1929 as the lead ship of the second batch of County-class cruisers to be built, known as the London subclass. During the 1930’s, HMS London took part in a goodwill visit to Venice and assisted in the evacuation of civilians from Barcelona during the Spanish Civil War, before being sent to drydock for refit in 1939.

In 1941, HMS London took part in the hunt for the battleship Bismarck, after which the ship was once again dry-docked for repairs. The following year, HMS London assisted in escorting several convoys in the Atlantic, after which she was assigned to South African waters in 1943, before joining the Eastern Fleet. HMS London continued serving in the postwar years, during which the ship got involved in an incident in Chinese waters in 1949 which left it heavily damaged. Being deemed uneconomical for repairs, HMS London was sold for scrap in January 1950. 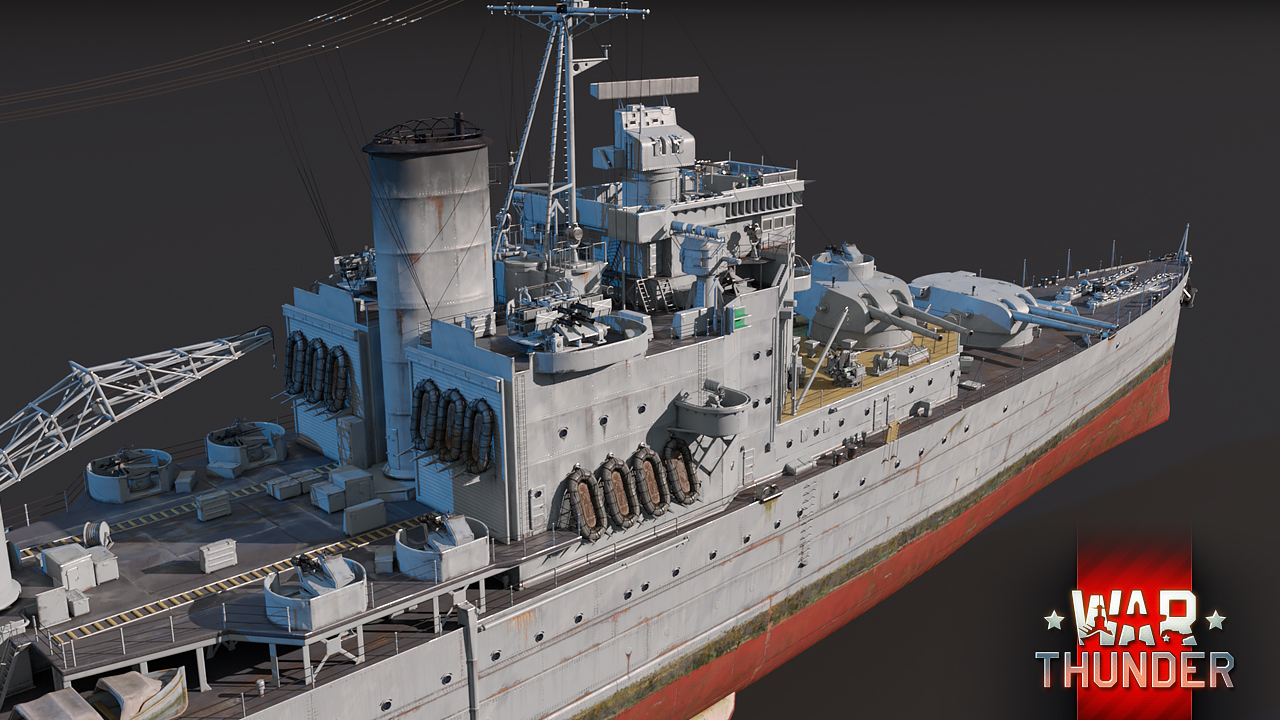 In War Thunder, HMS London will be a new rank V heavy cruiser docking in the ports of British captains with the release of the upcoming update 1.97 “Viking Fury”. Being the much anticipated successor to HMS Hawkins, HMS London gives British captains access to the larger calibre weapons, namely 8’’ (203mm) cannons, and as such allows fans of the Royal Navy to fight on a more equal footing with top tier vessels of other nations!

Arguably the most noteworthy feature of HMS London are its eight BL 8-inch (203mm) Mark VIII cannons, split down into four twin turrets. Being the first Royal Navy vessel in the game to come fitted with these high-calibre cannons, HMS London will allow British captains to effectively counter some of the top ranking vessels of other nations, introduced with previous updates.

Apart from an impressive main battery arsenal, HMS London also comes fitted with a wide range of secondary and anti-air weapons, numerous and powerful enough to make even the most determined adversary think twice before committing to an attack. Namely, captains will have access to four dual 4-inch (102mm) dual-purpose cannons, two octuple and four single 40mm cannons, as well as eight dual and four single 20mm cannons. If that isn’t enough, HMS London is also outfitted with a quadruple 21-inch (533mm) torpedo launcher on either side of the ship’s hull.

However, while British shipbuilders certainly didn’t cut any corners as far as firepower is concerned, the same cannot be claimed about the ship’s armour protection. In fact, HMS London’s armour had to be kept very light in order to keep the ship within original displacement limits, resulting in protection levels being unusually low for heavy cruiser standards. In 1942 however, HMS London’s base 25mm belt armour was further strengthened with 89mm add-on plating, thus somewhat improving resistance to enemy fire. Regardless however, the ship’s protection remains relatively light compared to other vessels of this class in the game, meaning that captains are well-advised to keep their distance from any intense firefights.

In terms of mobility, HMS London can reach a top speed of 32.2 knots (59.7 km/h), thanks to the propulsion generated by four steam turbines generating 80,000 horsepower. As a result, HMS London may not be spearheading any attacks, although this isn’t necessarily a deficit, given the ship’s rather lackluster armour protection.

HMS London is coming to War Thunder as part of update 1.97 “Viking Fury” and will become available to all captains as a new researchable rank V British heavy cruiser. In the meantime, keep your spyglass close at hand and your sights firmly fixed on the news for more information on the next major update coming to the game very soon. Until then, calm seas captains!

Instead of "Rule Britannia", lets listen to this :) https://www.youtube.com/watch?v=EfK-WX2pa8c

WTF yee wanks listiening to tis is the only F-ing thing you need https://www.youtube.com/watch?v=PSH0eRKq1lE ;)

is there any chance we can expect AH-64 in this patch?

You think its gameplay really would be that much different from ah-1z?? Still gonna be outclassed by ka-50 ingame

mdrpl7, Unfortunately you will be correct.

Look at the Dev server, they added a even more OP Ka52. For Patch 1.95, the top tier gameplay has been ruined. Very often you get killed by Ka50 when you entered the game within 1 minute, if you spawn the best possible SPAA which is ADTS, you will find the Ka50s are 9.5 - 10 Km away and you can do nothing about it. I was planning to buy the premium J29 CV 90 105, spend $110 USD to support the Sweden techtree, now because of the Ka52 and Ka50 balance issue. I am NOT going spend even A PENY

I really like this cruiser) But they were very upset that Japan did not give the heavy cruisers of 44-45 years with enhanced air defense .. For other nations, everything is fine already with the amount of air defense .. Even out .. London is stuck in air defense .. And the same Mogami current with 4 turrets 25mm ..

Got some notes on that incident in China, involving HMS London. It occurred on April 21st, 1949...'London' was on the Yangtse River, covering the escape of the British frigate HMS Amethyst, when Communist Chinese shore batteries opened fire. HMS London was severely damaged in the incident. The damage was too expensive to repair...so the Royal Navy had no other choice but to pay her off. HMS London was sent to the scrap heap in January, 1950. And now, she's back to reclaim her fighting spirit!

I even doubt that Japan will be given a normal 44-45 year heavy cruiser with enhanced air defense in the next update .. Japan is now the only deprived nation in the modifications .. Even the same Prem cruiser Mikuma is almost without air defense .. 4 turrets of 25mm well this is ridiculously very ... There would be no modification where 10-20 pieces of 25mm autocannons are installed ..

Imagine losing even in the premium ship department. What a joke, right?

Leutnant_Erica, But for that, all premium cruisers are good and they have a lot of air defense, and Japan? And Japan is simply crying because they do not want to give them ships of modifications 44-45 years

Are you planning on doing ANYTHING about the disgusting KA-50s? I've stopped playing top tier because every time I spawn I get killed, and I can't fight back because I don't have the range! PLEASE just nerf it! Even at TOP BR it's too god damn powerful! If you want to "encourage players to cap with helicopters" like you claim, let them have ROCKETS! By giving them ATGMs at the start of the match, you let them sit miles away and ruin the game for everyone else!

Why so silent about the AH-64s Gaijin!?

why complaining since it will surely come one day? You can't wish for everything to be available right now.

Sckod, He's i still wanna play this in 3-4 or more years, i also wish for the Bundeswehr Mig 29 but one after one

Well, at least British has been getting better in terms of basically in naval. Japan just gets the weakest thing since we all know that *cough* bias *cough* Japanese navy never upgraded their AA armaments. They were all the same since they day they left the docks. Wartime modifications are hard to come by in terms of data and would totally break the game.

I'm curious about which *bias* you are talking because it gets old :)

Sckod, Naval bias obviously. Should have been quite obvious at this point.

Yeah...I feel sorry for the useless AA on Japanese cruisers. It's not very fair. Though the Kent has DREADFUL AA in the game.

So. Uh. What's going on with the Kent?