In the late 1940s, the Swedish Ministry of Defence released a set of requirements for a new, cutting edge jet interceptor. Among other requirements, the new aircraft was to be capable of reaching speeds of Mach 2 and able to hunt down transsonic bombers, while being easily maintained and capable of taking off from special public roads.

Having gained the necessary insight on the performance of the double delta wing, Saab engineers transferred the newly acquired experience into the development of the actual aircraft to address the Ministry’s requirements - the J35 Draken was born.

The J35 Draken undertook its maiden flight in October 1955 and entered service with the Swedish Air Force in March 1960. Over 650 Drakens of various modifications would be built until the end of production, serving with Sweden until the late 1990s before being decommissioned. Apart from Swedish service, the J35 Draken also saw use with Denmark, Finland and Austria. The Austrian Air Force was the last operator to decommission the Draken in 2005, while some units are still in civilian use. 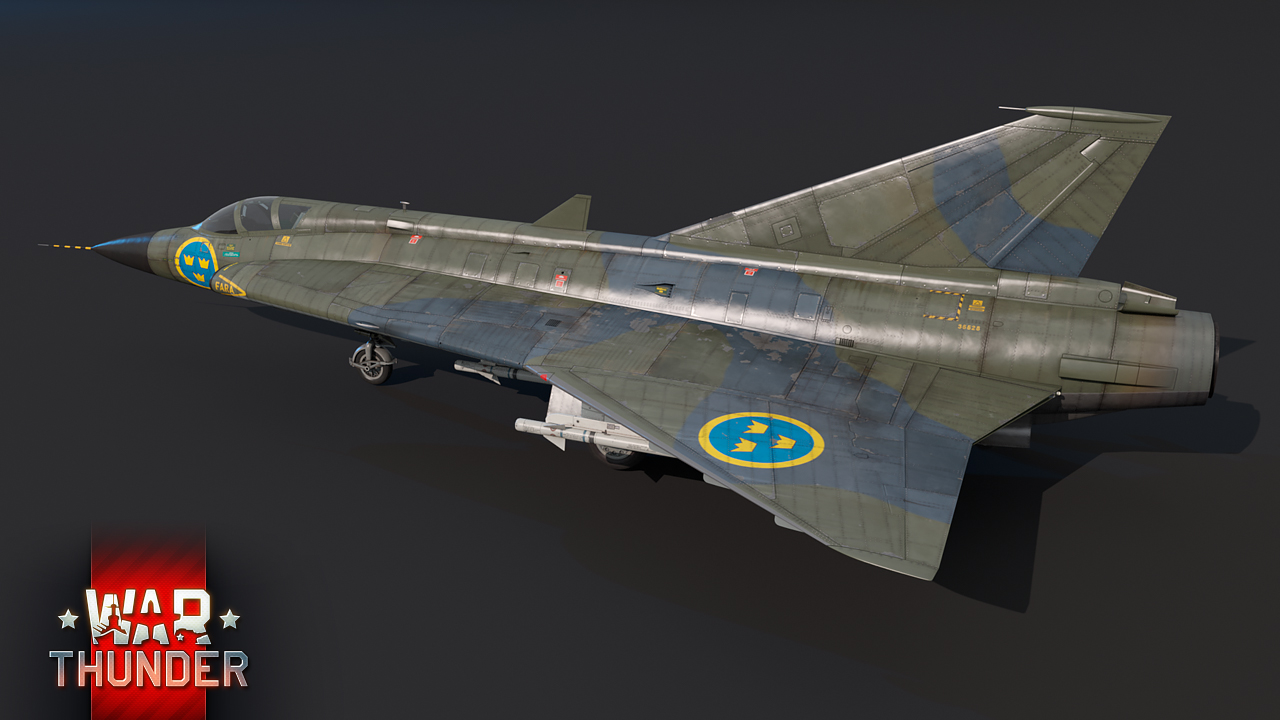 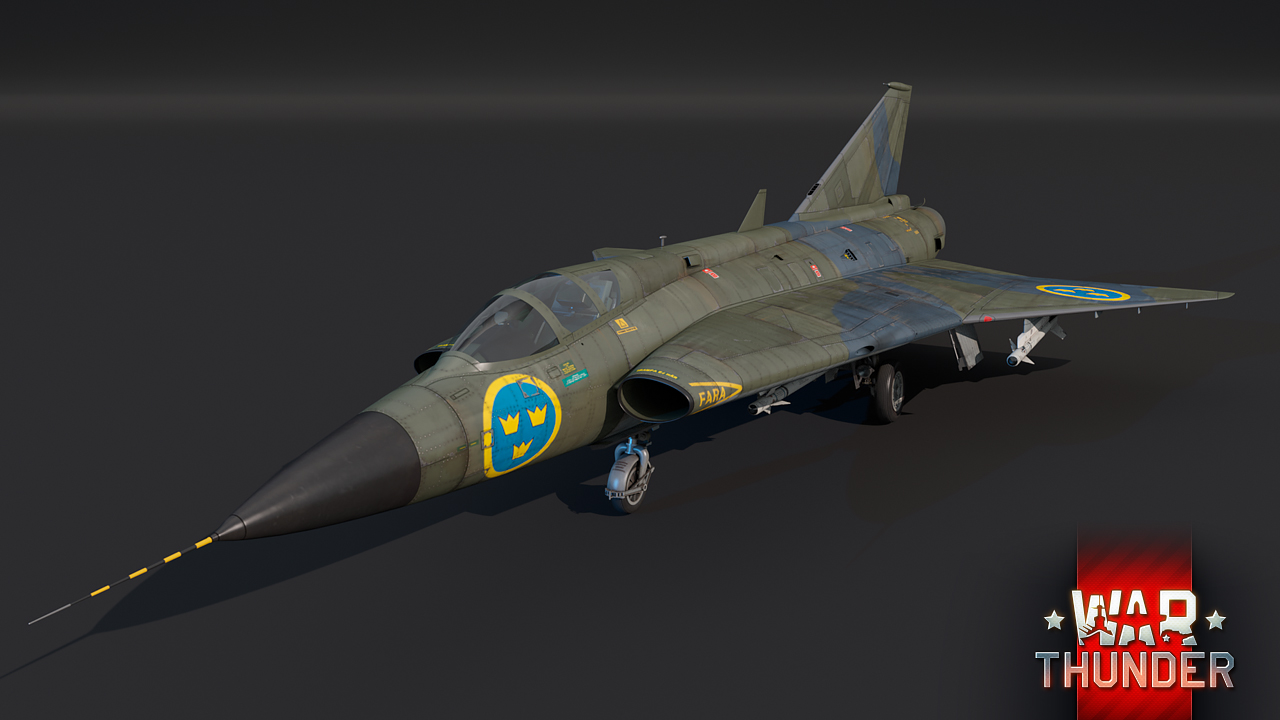 In War Thunder, the J35 Draken will come to the game as part of update 1.97 ‘Viking Fury’, and will immediately become the new top jet fighter available to Swedish pilots with the release of the next update. The Draken is arriving to the game in one of its later variants - the J35D.

The J35D is powered by the Svenska Flygmotor RM6C turbojet engine - a licence-built version of the Rolls-Royce Mk.300 Avon - which generates 5,840 kgf under normal use and up to 7830 kgf with active use of the afterburner. Translated into less scientific numbers, the powerful engine allows the J35D to reach a top speed in excess of 2,150 km/h at an altitude of 11,000m.

While no doubt very impressive numbers, this doesn’t quite put the J35D on an even playing field with some of the other top performers of other nations, capable of reaching Mach 2 speeds. However, the J35D does hold a significant advantage over its potential opponents, far more impactful than being able to fly at twice the speed sound - namely, unmatched maneuverability.

Fun Fact: The J35 Draken is the first fully supersonic aircraft deployed in Western Europe and also the first aircraft to pioneer the impressive ‘Cobra maneuver’.

Thanks to a combination of its double delta wing design and highly powerful turbojet engine, the J35 Draken is a highly unstable aircraft. What sounds like a negative trait at first, is actually a highly desirable quality for jet fighters as it makes them more maneuverable and responsive. As a result, the Draken will become the most agile jet fighter in the game compared to its immediate adversaries upon its arrival to the game.

Furthermore, the Draken was the first aircraft to pioneer the so called ‘Cobra Maneuver’ - a skillful maneuver initially trained by Swedish pilots as a counter to super stalls, which can however be used defensively in dogfights too in order to lose pursuers and gain an upper hand on your opponent. This maneuver can be replicated by skilled pilots in War Thunder too and we’re already looking forward to seeing what some members of the community will be able to achieve with it!

As far as firepower is concerned, the J35D is a fighter through and through. Armed with a pair of 30mm cannons, with 90 rounds of ammo per gun as its primary weapons, pilots will need to ensure utmost trigger discipline and accuracy in order to make the most out of their guns. Fortunately, the Draken can be further equipped with up to four Rb24 air-to-air missiles in order to expand its abilities during combat. Although not dedicated to it, the Draken can also be used to a limited degree in the ground attack role, thanks to the ability of mounting two types of unguided rockets.

The highly anticipated J35D Draken is arriving to the aerial battlefields of War Thunder very soon™ and will become available to all pilots as the new top Swedish jet fighter with the release of the upcoming update 1.97 ‘Viking Fury’! We’ll see you there pilots!

Commenting is no longer available for this news
Rules
Whiskoof
29

Nice jet, with Delta wings and *elevon* tail mechanic. So if you are able to release Drakken for 1.97 without trouble. Why Mirage IIIC, sharing the same concept is delayed forever ? Tell us the truth please.

We have already made this very clear. The FM for tailless aircraft like Draken and Mirage was an extreamly complicated development to achieve due to their abilities and complex nature. It was only very recently that we worked this issue out. Beyond that, the Draken model was simply ready and finished before the Mirage was. Hence why its here now.

Smin1080p, Took you a while to get your stories straight lmao

The truth is, we hate the French. The only people liking the French are some of their own countrymen, but even that number is limited.

Gosh, isn't she a beaty?! I bet she would hit even harder with Rb.24J missiles

She'd be even better if her wings would stay on comrade! )))

DodgerRoger, It's not like the wings were ripping at even the slightest turn. If you paid some attention while flying it, it usually ripped at 14+ Gs and -8+Gs and that doesn't seem to far fetched for me

Kinda hard to pull a cobra when your wings are banished to the shadow realm at the slightest tug of the stick; but what do i know. ¯\_(ツ)_/¯

The devs are fine-tuning what was on the dev server. Got a lot of bug reports too, pretty helpful.

Ouiche, I know; and i am deeply sorry for being a pain. I just love this plane to bits, and seeing it rip itself apart saddens me. Keep up the good work Ouiche; i believe you guys can fix this problem. 👍

This isn't a maneuver which can be performed at breakneck speeds anyways. You have to fly the aircraft at relatively low speeds to get it to work. If you were hoping to do this while doing Mach 1, then I'm afraid you might be a little bit disappointed. :(

:Some one asking for mirage: Ouiche: Unfortunately not this update, it's still under development. This specific plane happened to be really complicated to model due to the tail - or absence of it, this specific configuration was not really possible in our game until very recently. We get the frustration, i'd love to have those plane in the game but there was extra work to be done before being able to add them. Gaijin : ADD THE DRAKEN TO THE GAME, BRO WHAT IS THIS SOMEONE TELL ME WHAT IS THIS

SetEnceL, Mirage IIIC was passed for consideration end of 2018, dev started in 2019. Draken brought them that tail mechanic solution but was WIP (Work In Progress) way after Mirage. On the other hand, Mirage F1C got validated only in october or november if i remember, so we won't have it soon. We are mad because they throw bs after bs excuses to kill the horse.

hey nice one, now you have no excuse for not puting the Mirage 3!!! :p hope to see it next patch, if not you will receive some nasty french cheese in your maile box :D btw are you planning on giving more payload option for the French F100D they were used also as attack aircraft, and they have receive training to drop napalm, bombs, and were able to use the bomb A (atomic one) so why don't we have some few bombs, and better AIM 9s ?

about the mirage, on a more serious line : I prefer to wait and have a nice vehicule than have a rushed one all messy and bugy, with a lot of thing missing :)

Abaddon75, Calling it now, not matter how long we wait, it'll we be all buggy and messed up

I want the Mirage, too. And the Sea Harrier so I can eat Mirage for breakfast.

RoscoeRed3NotRUS, lol I think you are talking about Super Etendard, Mirage 3 won't be easy prey for your slow Harier :p but I would be happy to see them in the Brit Tree since it's my second fav Nation even if I'm far from the top tier :D cheers :3

All that's left is Swedish highways where you can land on and repair/rearm!

She is a beautiful bird <3