The Radkampfwagen 90 is a German experimental wheeled tank, developed during the 1980’s to equip the Bundeswehr with a highly mobile and well armed combat vehicle. Despite never making it past prototype stage, tankers will soon have the chance to field test the Radkampfwagen 90 on the virtual battlefields of War Thunder in update 1.97 ‘Viking Fury’!

Briefly: An experimental German wheeled tank, featuring superb mobility and firepower at the expense of protection.

In the early 1980’s, the West German Ministry of Defense sought to procure a wheeled tank themselves, after observing the success of similar designs of other nations such as the French AMX-10RC. The mostly positive experiences made with the introduction of the wheeled Luchs in the years prior, further convinced the German military of this idea.

As a result, the Ministry of Defense tasked the Daimler-Benz company, who had also been involved in the development of the successful Spähpanzer Luchs before, with developing this new wheeled tank. By late 1983, the first mock-up was created and the project received its official name - Radkampfwagen 90, or alternatively, Radpanzer 90.

The first, and what would end up being the only prototype was constructed in 1986, subsequently undergoing various trials. Despite proving itself as a highly capable vehicle and producing favorable test results, the dissolution of the Eastern Bloc and its Warsaw Pact alliance, caused not only the need for a vehicle such as the Radkampfwagen 90 to disappear, but also for a valid justification of accepting its high production costs. As the direct result of a combination of all these factors, further development of the project was suspended in the late ‘80’s - early ‘90’s, with the Radkampfwagen 90 project being ultimately abandoned. 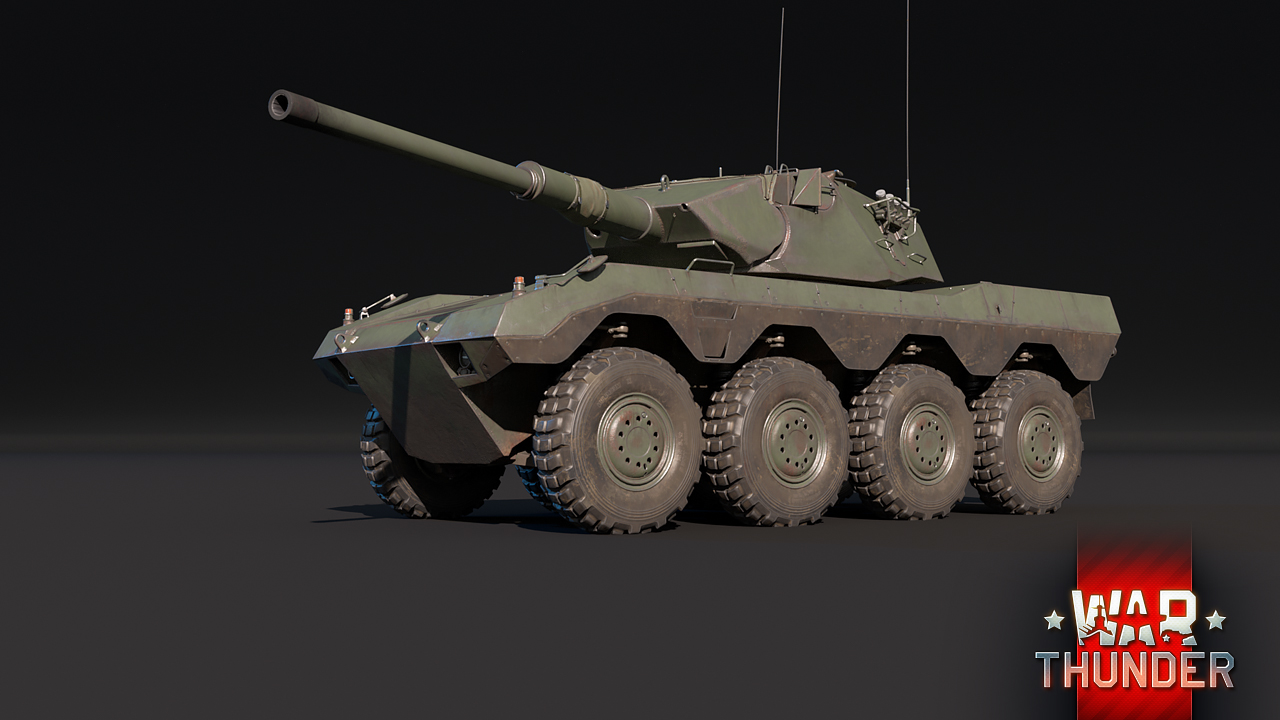 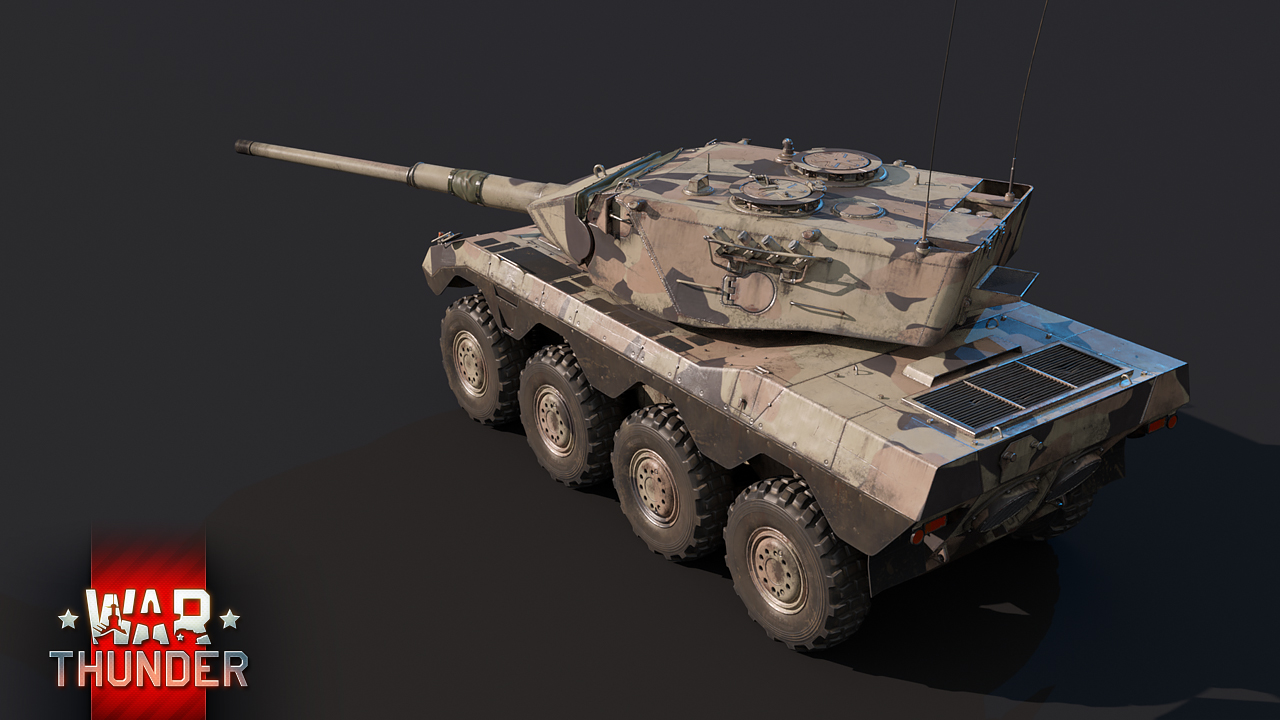 In War Thunder, the Radkampfwagen 90 will be a new wheeled vehicle, making its way to Rank VI of the German ground forces tree with the release of update 1.97 ‘Viking Fury’. Similar in design and purpose to the already familiar Rooikat, Type 16 or Centauro wheeled tanks in the game, the Radkampfwagen 90 gives German tankers access to a highly mobile and very well armed light vehicle, perfectly suited for the dynamic combat conditions found in high rank battles!

Contrary to what its name might suggest, the Radkampfwagen 90 is primarily armed with a 105mm L7A3 cannon - a staple of many Western tanks found at higher ranks and one with which German tankers should be plenty familiar with from the Leopard 1 series of tanks as well as some others. Additionally, players can also utilize the coaxially mounted 7.62mm MG3 machine gun for purposes of combating unprotected targets, spotting or even rangefinding.

In addition to offering the usual and most familiar range of sub-calibre, HEAT-FS and HESH rounds, the Radkampfwagen 90 is also the first 105mm armed tank in the German tree to have access to the more powerful DM33 APFSDS round.

As far as the Radkampfwagen 90’s own protection is concerned, it’s very similar in effectiveness to the aforementioned counterparts of other nations. Being equipped with up to 35mm of high hardness steel, coupled with spaced armor elements at the turret sides and mantlet as well as lower glacis of the hull, the Radkampfwagen 90 is sufficiently shielded against threats posed by small calibre autocannons as well as shrapnel, whilst high-calibre MBT rounds won’t find it all too difficult to simply overmatch the vehicle’s armor and cause significant damage.

However, thanks to its powerful 830 horsepower diesel engine, the Radkampfwagen 90 can claim excellent mobility for itself, being able to reach a top speed of 100 km/h on roads. Because of the high power output of the engine, the vehicle possesses an excellent 27 hp/t power to weight ratio, promising excellent mobility even in off road conditions and helping to more than offset the vehicle’s rather high mass of 30,76 tons.

The Radkampfwagen 90 will soon become available for research to all tankers as a new German Rank VI light tank, coming to the game as part of the upcoming update 1.97 ‘Viking Fury’. In the meantime, be sure to stay tuned to the news as the release of the update draws ever closer. Until then, tankers!

Commenting is no longer available for this news
Rules
SwissFox98
23

Radkampfwagen is a wagen dat kamp on roads?

also pretty rad by the sounds of it

_Forneus_, rad camper, no other vehicle is so rad dude.

where is the stryker MGS, or is gaijin still going to follow its usual mode of ignoring the U.S Ground Tree, or are you going to give another abrams that is broken on release and you all never fix it with armor gaps wrong ammo and the wrong armor?

sartt, stryker mgs is not designed for tank combat and is from i guess 2008. There is also 3 other version than the 105, ther's the atgm one, the AA one and the dragoon one. If they are added, italy will complain and we will have to deal with the draco...

ApAcHe WhEn. Go away CK.

Rokkerboyy, its not apache when apache this patch

Hey Gajin what about a discount on premium for the people that are facing the quarantine due to coronavirus? Here in Italy a lot of companies offer discount or free things to help people fight the boredom due to the lockdown

Place for your notes :P (fixed, thanks)

Stona_WT, While at it, could you guys make such simple things like editing or deleting own comments here? sometimes really annoys not being able to edit and have to write a new comment.

It's either tomorrow or next tuesday

Taikapallo, i really hope its tomorrow

SOON®™℠..... Best to stay tuned to news and or the forum for Dev opening possibilities

Pacifica, i really hope its not the VALVE Soon XD. best of luck on ur update

Viggen when? or more importantly , Update when??

Like one dev said in previous blog... "sooner than soon"....whatever that means.

smaddeus, I am a Dev now ? yay!.... We are just Moderators... Community managers or Admins have Blue Names.... and "soon™" is a longer time compared to "soon"

YES YES YES. This is what I have been waiting for (Besides the Puma IFV), so excited for this thing to come out :D