The Type 1936A (Mob) is a further development of the base model Type 1936 destroyer already familiar to many players. This improved and upgunned version of the Type 1936 will soon be awaiting new captains in the upcoming War Thunder update 1.87!

Even before the outbreak of WW2, the Naval High Command of the Kriegsmarine was concerned about the firepower of its most modern destroyer vessels. Fearing they may be outgunned by comparable vessels of other nations, a study was initiated in 1936 about the possible upgunning of the Type 1934 and 1936 class destroyers with 15cm main guns.

The study quickly revealed that, although this upgrade was theoretically feasible, in practice it resulted in severe stability issues on the affected vessels and actually hampered their abilities more than increasing them.

However, whilst the Type 1934 and 1936 class destroyers kept their original 12.8cm main guns as a result of the conducted study, the Naval High Command didn’t wish to abandon the idea completely and ordered for modifications to be made to the existing Type 1936 design in order to accomodate for the desired firepower upgrade.

This resulted in the creation of Type 1936A which was ordered into production in 1938 and consisted of a total of 8 ships. Although this class was designed to allow for the realization of the desired firepower upgrade, it still suffered from the same problems highlighted by the initial study and was known to have reliability issues with its steam turbines.

In 1940, the first of a total of 7 Type 1936 (Mob) destroyers were laid down. These were designed in an effort to address some of the known issues of the upgunned Type 1936 destroyers as well as to simplify their design in order to allow for shorter construction times.

Only a handful of the upgraded Type 1936A and 1936A (Mob) destroyers were lost in combat during WW2. In fact, more than half of the ships of these two classes survived the war and were used by several allied nations post-war, including the US, UK, USSR and France. The last remaining ships of this class were decommissioned from active service in the late 1950s. 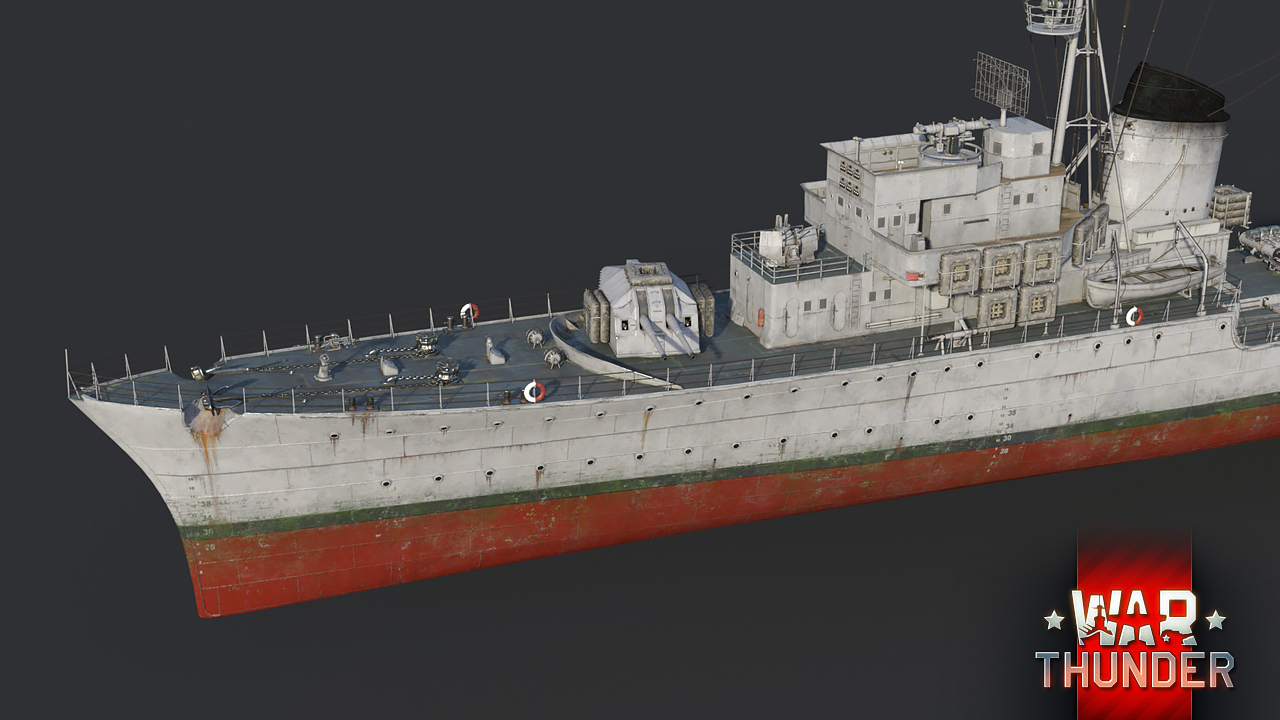 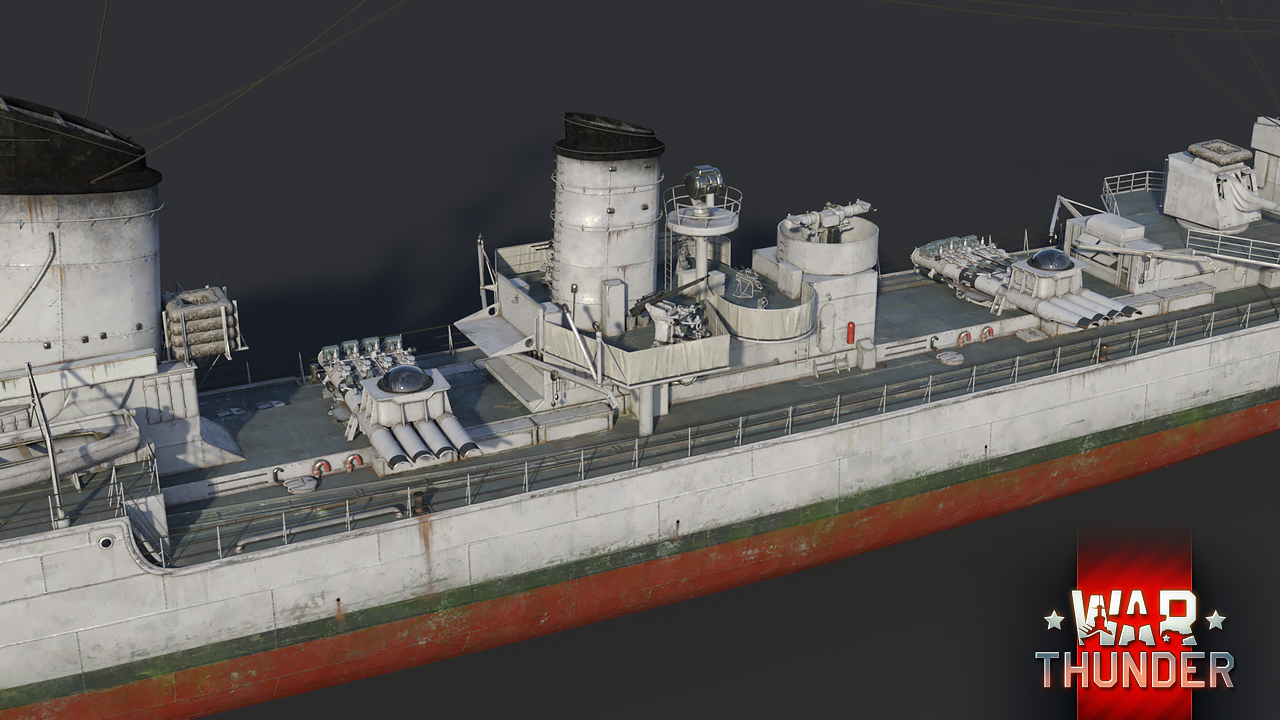 In the upcoming update 1.87, War Thunder captains and fans of German naval forces will have the chance to command the Type 1936A (Mob) class destroyer, represented by the Z32 - a destroyer which saw extensive use during its relatively short service life and even clashed with HMCS Haida on her last engagement in 1944.

The Type 1936A (Mob) destroyer shares many similarities with the base Type 1936, like its general visual appearance for example, though there are some notable differences to be pointed out as well. Producing the same amount of power as the previous models, while being longer and heavier results in the Type 1936A (Mob) having a slightly worse top speed of 36 knots (66,7 km/h), compared to the regular Type 1936’s 38.5 knots (71 km/h).

However, keen-eyed captains will have undoubtedly already noticed the largest and single most important difference - the difference in primary armament. While the regular Type 1936 destroyers utilize 12.8cm main guns,  from this point of view the 1936A (Mob) destroyers are closer to light cruisers thanks to their primary armament of five 15cm guns!

These five monstrous guns are split between three single gun turrets located on the ship’s aft and a double turret situated on the bow, right below the bridge. Captains who have already used or versed light cruisers know precisely how devastating these large caliber cannons can be, as often only a few salvos are enough to completely knock out smaller targets, such as destroyers.

However, light cruisers are large and cumbersome compared to the light and nimble destroyers. This is where the Type 1936A (Mob) steps in and combines the best aspects of both ship types - utilizing the hard-hitting light cruiser caliber guns and combining it with the outstanding speed and maneuverability offered by the Type 1936-class design. Aspiring commanders of this vessel should keep one important caveat in mind however - the longer reload time compared to his predecessor with larger caliber guns.

Overall, this upgraded modification of the proven Type 1936-class destroyer will most certainly make for a fearsome adversary in naval battles and should under no circumstances be underestimated, even by light cruiser captains!

Commenting is no longer available for this news
Rules
cody_conroy
44

I would just like to say thank you gaijin for working so hard and pumping out update after update. People don't give your team the credit for all they are contributing, i for one am really excited for all the new ships, and the long list of planes and ground vehicles coming this update.

Very nice, Thanks for your hard work Dev's

first of all it was only on the dev server, it is doubtly if they implement that on the live server, secondly if you would have read the statement back then they said they will enable it until march (https://forum.warthunder.com/index.php?/topic/429199-developer-commentary-fpe-parts-rp-gain/), there is also a devblog about it but i cbf to look it up.

Did they ever reduce the rp for parts and rp? I thought they just made fpe easier to get by requiring only one tier one module.

This looks like excellent fun. Give moar naval stuff Gaijin!

Yeah, what he said! we could use some more lower rank naval vessels as well as high rank stuff. USS Eire Class would be good slightly higher rank equiviant to the K2 Gunboat.

I just want the update to launch already, I just feel so pumped about it! Looking forward to all these new vehicles!