The T-80U is an improved version of the legendary Soviet T-80 main battle tank, featuring a more powerful engine, increased mobility, and improved protection. Being introduced to War Thunder as part of update 1.87, the T-80U will be the first vehicle awaiting Soviet tankers at the brand new seventh rank, coming to ground forces in the next major update!

Work on improving the existing T-80 MBT begun as early as the mid 1970s, with the design bureau in Leningrad, which was responsible for the production of the T-80, starting work on a joint project to further enhance the T-80’s capabilities.

In the early 1980s, the first prototypes were being built, and after extensive testing and design tweaking, the new tank was considered ready for production and was accepted by the Soviet military under the designation T-80U.

The T-80U received turret and upper frontal enhancements as part of its new construction, and was equipped with a second generation ERA protection system known as Kontakt-5. In contrast to the previous generation of dynamic protection, Kontakt-5 increased the tank's protection against HEAT and armour-piercing shells. The modifications also affected the armament of the tank - the T-80U is equipped with a new 1A45 fire control system and Reflex ICBM, which used more advanced 9M119 guided missiles. Subsequently, the tank was equipped with a new, more powerful GTD-1250 gas turbine engine which helped compensate for the increased weight of the vehicle and improved its dynamics.

The T-80U had been factory produced in Leningrad in 1987, but in 1989, its production was moved to Omsk. Work on upgrading the T-80 was carried out in Kharkov, but there, they constructed their own vehicle equipped with a diesel engine, which was designated ‘T-80UD’. The latter would evolve into further developed Ukrainian derivatives of the T-80.

T-80Us served with the Soviet military until the collapse of the Soviet Union in the late 1980s, and have since continued serving with the Union’s successor states to this day. The vehicle also saw service abroad with some other countries as well, primarily with South Korea and Cyprus. Overall, around 700 T-80Us have been produced since 1985, but the vehicle never saw any combat action. 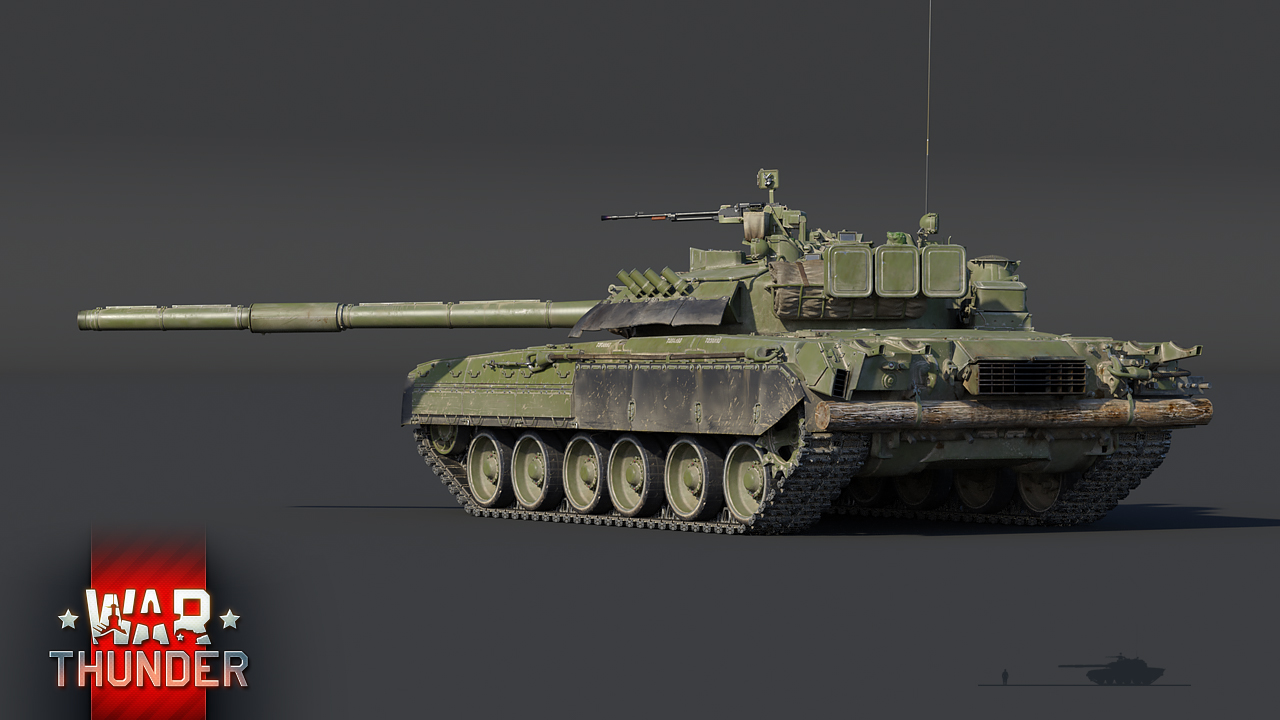 In War Thunder, the T-80U will be among the first vehicles awaiting tankers at the brand new seventh rank, coming to the Soviet ground forces tree with update 1.87. Unlike the T-80B, which is already familiar to some tankers, the T-80U features greatly improved protection over its predecessors and also received minor improvements to its firepower.

Compared to earlier versions of the T-80, the T-80U features a new turret and an improved, cellular type of composite armour being used in both its turret and hull. Apart from that, the T-80U is fitted with an integrated second generation Soviet ERA, called “Kontakt-5”. Unlike the preceding ERA, Kontakt-5 is not just effective against chemical rounds , but also against kinetic ones as well.

As a result, the T-80U becomes quite a tough nut to crack, even for some of the more modern shells in the game. With Kontakt-5, the armour on the T-80U is able to absorb up to 620mm of penetrating power from kinetic and up to 1000mm from chemical rounds. However, it’s worth noting that Kontakt-5 remains a type of reactive armour, meaning that it’s a single-use only and won’t provide any additional protection once it’s already been activated. Additionally, it has a much smaller overlap than Kontakt-1, resulting in more vulnerabilities. 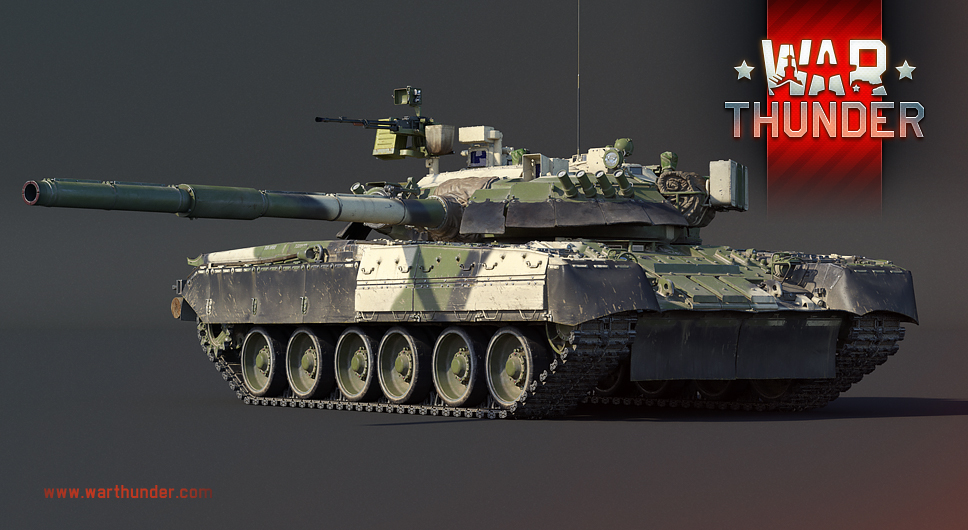 As far as firepower is concerned, the T-80U continues to use the already familiar 2A46M 125mm smoothbore cannon, found on several contemporary Soviet MBTs. As a result, the ammunition selection remains virtually the same as with the preceding T-80B. An exception to this, however, is the new armour-piercing shells and addition of the slower moving, but higher penetrating, 9M119 “Refleks” ATGM to the T-80U’s arsenal.

To counter the weight increases resulting from the additional armour fitted to the T-80U, Soviet engineers decided to mount a slightly more powerful gas turbine engine to the vehicle, producing 1,250 horsepower. The powerful modern engine not only compensates for the increased weight of the tank, but also increases its mobility.

The T-80U will arrive to War Thunder as part of the upcoming update 1.87 and will become one of the first vehicles to occupy rank VII of the Soviet ground forces tree. In the meantime, make sure to stay tuned to the news for more information regarding the next major update. Until then, happy hunting tankers!

Commenting is no longer available for this news
Rules
igeticsu
38

I really really hope this patch brings RP and SL rebalancing. Grinding through tank after tank after tank that are all at 390.000 RP, while loosing SL every single match, makes top tier very unenjoyable.

if you lose SL every match then its you and not the game.

Nah, better add new top BR MBT's and new premium stuff. Who cares about gameplay and balance that have been ignored for months and months.

What about Japan, Italy and France?

CokeSpray, you always say that, and at the end one of the 3 gets nothing

Japan already have the excellent Type 90. We will have some news soon on things for other nations :)

Smin1080p, and rus had exelent t80,usa exelent m1 and m1ip,germany exelent leopard 2a4 so why are they geting rank 7 vehichles wjy not just british,frensh and italy get new vehichles

cool... so new Rule no. 1 for Gaijin, USSR needs atleast one new MBT EVERY. SINGLE. PATCH. Thanks for nothing

You realize in all likelyhood everyone is getting a new MBT, right? Jesus christ wait until the patch notes come out to say shit like this

No, it's not a new rule. However this is the introduction of Rank VII and you will see new vehicles for many nations, not just the USSR. Whilst they may not be to your taste, it's also worth noting that Soviet MBTs are very popular, so let's allow those that do enjoy them to have their moment here. There are plenty of new things for all nations :)

Smin1080p, Soviet MBT driver do hoever get a new one to enjoy in every single patch while other nations still only have a single 3rd gen MBT, namely Japan, Germany and France is still stuck with a gen. 2.5 kind of vehicle

Don't mind me. I'll just be waiting for my M1A1 Abrams.

Well, in the meantime, you can enjoy this awesome Soviet tank and the American Cruiser we announced today :)

Smin1080p, I agree ! We can enjoy the happiness for killng thousands of Challenger 2s easily and efficiently ! there is no need to play british things any more !!!

War Thunder moderators, how do you stay sane with all these childish and ungrateful comments on devblogs?

To be fair most aren't "ungrateful" as this is not a charity but rather from disappointed customers who feel that the devs completely neglect the important parts of the game, while you pay for this game.

Other than the looks which are different what is going to make Leclerc so special and different from the current MBT's in game?

LandKreuzer_89, Nothing, we just want a *PROPER MBT* to use againts current MBT`s. We only have AMX-40...

Yes, same gun as Leo2a4 just more armor. Just like the t-80U. Not a powercreep as all the freedaboos think.

von_Stauffenburg, The Abrams and the Leo2a4 will not be able to penetrate this tank from the front.