USS Brooklyn is the lead ship of her class of next generation American light cruisers, built under the restrictions of the London Maritime Treaty in the 1930s. War Thunder captains can look forward to commanding a powerful brand new addition to the American light cruiser roster, coming soon to the game with update 1.87!

Briefly: One of the most heavily armed light cruisers ever built for the U.S. Navy, capable of easily outgunning its opposition with the use of its fifteen 6-inch guns!

In 1930, the London Naval Treaty extended the limitations imposed by the Washington Naval Treaty by further limiting the construction of large warships. Well-aware of the importance of such warships for operations in the Pacific, the U.S. Navy initiated the development of a new light cruiser design that would suit their needs, whilst remaining within the limitations of both treaties. The new design, that would become the Brooklyn-class light cruisers, was a compromise between heavy cruiser size and protection and light cruiser armament. In other words, the ship would remain within the 10,000 ton displacement limit, but would also offer the desired seaworthiness and autonomy at the same time. Initially, the ship was intended to carry only a dozen 6-inch main guns. However, with the appearance of the Japanese Mogami-class cruiser, a decision was hastily made to increase the number of main guns to 15, in order to match the armament of the Mogami-class. With this choice, the Brooklyn-class cruisers would become the most heavily armed light cruisers ever built for the USN. The first orders for four ships were issued in 1933, followed by an additional three in 1934. The lead ship of the class, USS Brooklyn (CL-40), was laid down in March 1935 and commissioned into service in September 1937. USS Brooklyn primarily served in the Mediterranean theater during WW2, participating in the North African campaign and later on in the Italian campaign. The ship mostly served as a support in landing operations and performed coastline bombardments, while also engaging in the occasional naval skirmish. Soon after the end of WW2, USS Brooklyn was decommissioned in 1947 and handed over to the Chilean Navy in 1951 under the new name of O’Higgins (CL-02). The ship would continue to serve on with the Chilean Navy for over 40 years, before being sold for scraps in 1992. 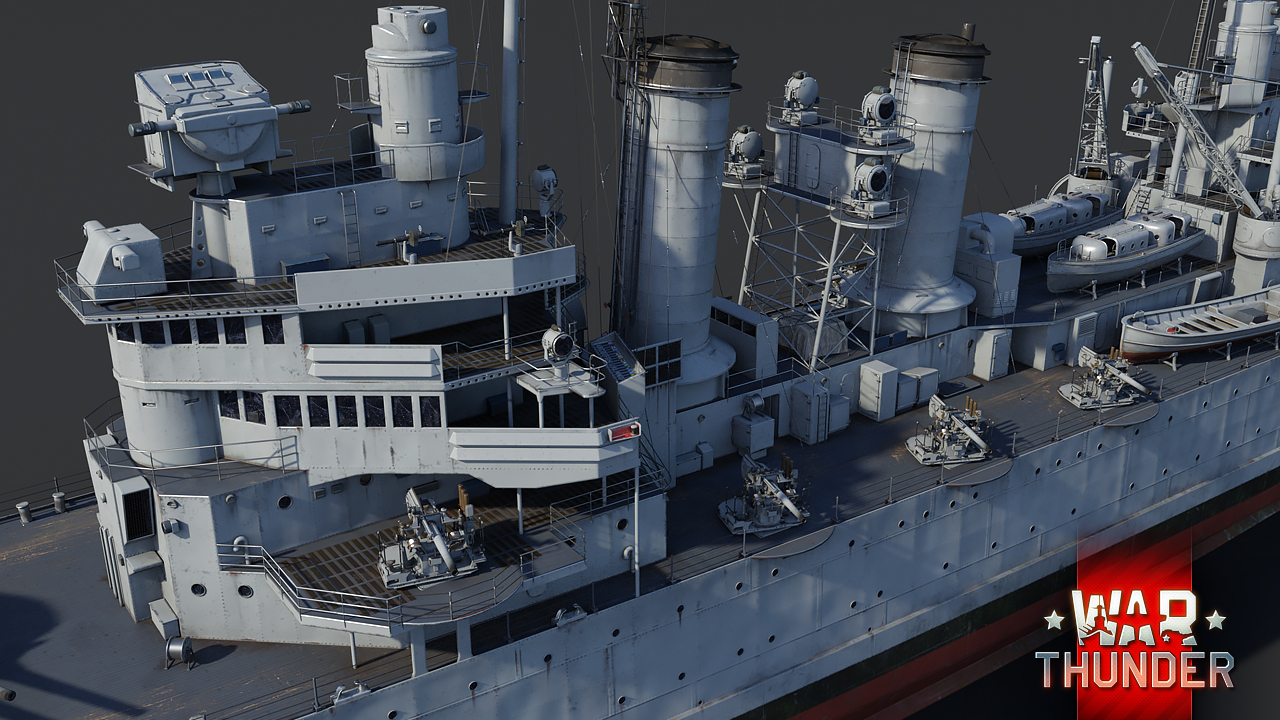 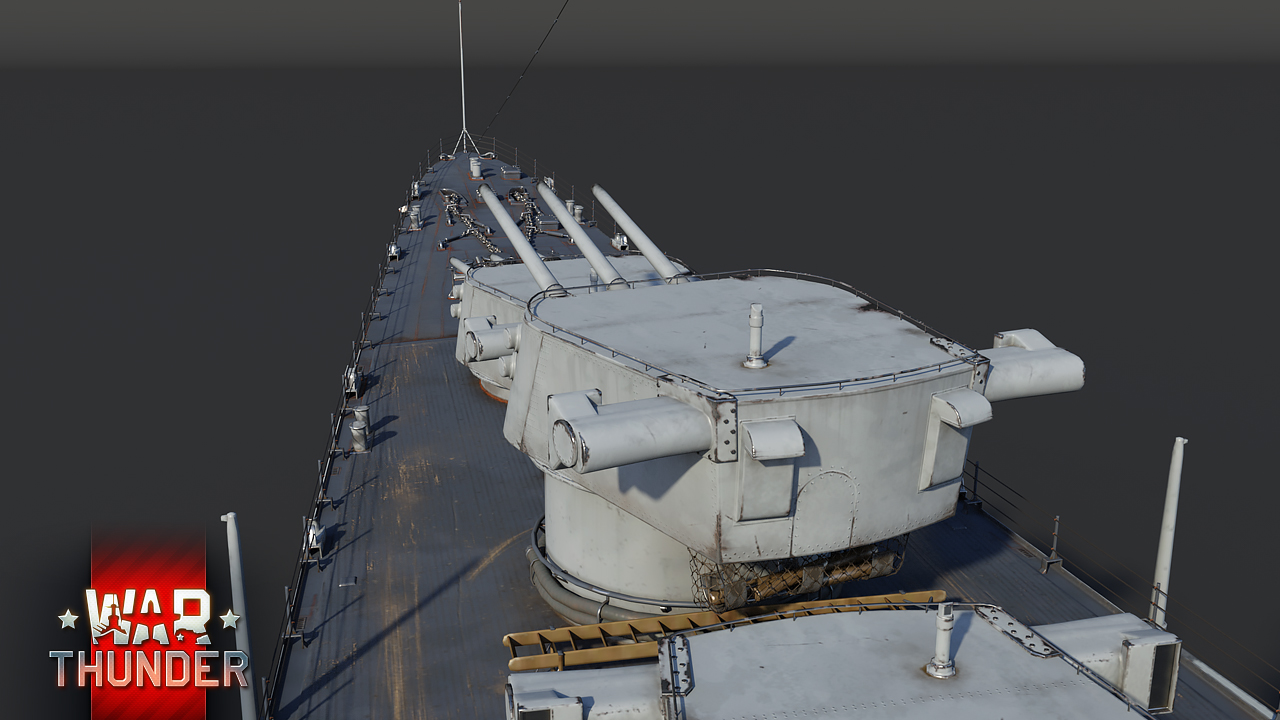 In War Thunder, USS Brooklyn will be a new light cruiser coming to the top rank of the American naval research tree with the release of the upcoming update 1.87. Soon, all captains will have the chance to command one of the most powerful warships available in War Thunder naval battles to date.

Although also a light cruiser, what really makes USS Brooklyn stand out from the already available light cruisers in War Thunder isn’t just the slightly bigger size or more modern looks - it’s firepower instead. While the number of guns for existing cruisers in the game varies between 4 and 10, USS Brooklyn takes it up a notch by having a total of 15 6-inch (152mm) main guns, spread across five triple turrets!

Apart from the overwhelming number of main guns, Brooklyn also has eight single 5-inch (127mm) dual purpose guns installed on deck and four on each board side, but lacks in any kind of torpedo armament. The 5-inch guns can both help in destroying enemy surface vessels and are also the main means of protecting the cruiser from air attacks, as they can fire shells with a radio fuse. Additionally the ship's weapons are complemented by eight large-caliber machine guns.

Fun fact: Although some were severely damaged during WW2, all Brooklyn-class light cruisers survived the war, with some going on to serve many more decades as part of other navies.

Another reason to think twice before engaging USS Brooklyn, apart from its lethal firepower of course, is its armour protection. With the belt armor going up to a thickness of 127mm and the deck armor up to 51mm, the USS Brooklyn is to some extent protected against all kinds of enemy fire.

The ship’s eight steam turbines separated by a longitudinal partition, which are capable of bringing the ship up to a top speed of 32.5 knots (60 km/h). Due to their tight arrangement, it’s highly likely that a single well-placed salvo can completely knock out the ship’s all the turbines on the one side. Commanders should therefore be cautious, as armour of the ship is not enough to protect them from the fire of other cruisers, as well as many destroyers.

USS Brooklyn is steaming at full speed ahead towards War Thunder naval battles and is expected to arrive at player ports with the release of the upcoming update 1.87. Be on the lookout for more news regarding the next major update coming to War Thunder. Until then, calm seas captains!

Commenting is no longer available for this news
Rules
WAR_Falcon
24

Sooo..... 40k repair cost again? Or are you gonna make it and the german ships useable? I literally lose over 100k sl in my germam lineup. That is unacceptable for a single game gaijin! Srsly no wonder naval is dying when every ship has a 50k sl repair cost....

making players feel bad for wanting to play with certain vehicles is a feature in war thunder, it's working as intended! xd

BarMan_Festeiro, You don't need to make bomber cockpits when people have no interest in playing bombers because the repair cost is so high)))

This is one of the reasons why War Thunder dropped massively in attractiveness to me. When you pay for progress (aka premium account) you should never make minus. It's not even acceptable for the F2P guys. This game has turned into the Grind Simulator 2019 where you have to pay money in order to waste your lifetime due to progress being so little. And you feel it by top tier being only attractive for top-cracks and campers now. No match enjoyment there anymore. Absolutely unacceptable.

Are you guys going to add Heavy Cruisers and Battleships to naval battles anytime in the future?

The Prinz Eugen is in the game files, so Heavy Cruisers are basically confirmed.

AceTheMusicMan, The Prinz Eugen is used as the ai heavy cruiser on some naval maps I think IDK if it’s actually gonna be playable

Let's not walk before we can run. The Brooklyn is already a big ship compared to what we have in game calibre wise, so naturally we will work on counters for all current nations first.

Another american ship.... thank you.. but where is germany and japan..

RowanFW, Alright, are we comparing a 1928 ship with a 1936 ship now which is far superior, you should really think before you write something of this kind of crepé)) The koln is no match for this beast, i hope germany gets a modernized cruiser aswell.

As we said earlier, japan is for the first half of the year.

Ouiche, then why arent you making them instead as always you make things only for rus,usa and germany

Oh my god Gaijin this thing is great

I agree, I initially missed this devblog but after seeing this I am extremely hyped, Too bad I haven't grinded much of the US ships out yet, But I definitely know what I'll be doing for the next few days

Seems like i'm going to need the IJN Mogami for this...

Heavy cruiser?! MMMhh naaaa, pretty sure they got something else to counterpart this thing. ^^

_P51DMustang_, Mogami began life as a light cruiser with 5x3 6" guns. Brooklyn was developed to counter it. Only later were Mogami's three-gun 6" turrets replaced with 2-gun 8" turrets.