KMS Nürnberg is the second and final ship of the German Leipzig-class of light cruisers, which themselves are an improved version of the preceding K-class. In the upcoming update 1.87 “Locked on!”, War Thunder captains will have the chance to command this brand new light cruiser, coming to the top ranks of the Kriegsmarine very soon!

KMS Nürnberg was laid down in Kiel in 1934 as the second ship of the Leipzig-class of German light cruisers. Nürnberg was in fact, laid down some five years after the Leipzig due to the fact that it wasn’t initially ordered alongside the Leipzig. Instead, the ship was ordered for construction later on, as part of a planned expansion of the Kriegsmarine in the 1930s, resulting in the design also receiving some serious changes along the way.

The ship was completed after less than a year of construction, being officially commissioned into the Kriegsmarine in November 1935. Nürnberg’s pre-WW2 career is most notably defined by participating in non-intervention patrols along the coast of the Iberian peninsula during the Spanish Civil War. The remaining pre-war years, Nürnberg spent taking part in various naval exercises as well as in the occupation of the Memmel in 1939.

Early into WW2, Nürnberg was damaged by a torpedo fired by a British submarine, off the coast of Britain during an escort mission. The ship suffered only minor damages on returned to Kiel for repairs shortly afterwards.

Throughout WW2, Nürnberg would mainly serve in the Baltic sea or in Norwegian waters as a training ship or would assist in mine laying operations. By the end of WW2, fuel shortages severely limited the operational capabilities of Nürnberg. In January 1945, severely low on fuel, Nürnberg returned to Copenhagen where the ship remained until the end of the war.

Nürnberg was captured by the Royal Navy in Copenhagen and was later transferred to the Soviet Union as war reparations. In Soviet service, Nürnberg, now renamed to Admiral Makarov, continued to serve into the early 1950s, before being replaced by new Soviet cruisers. She continued serving as a training ship until the late 1950s, until finally being scuttled some time during the mid 1960s. 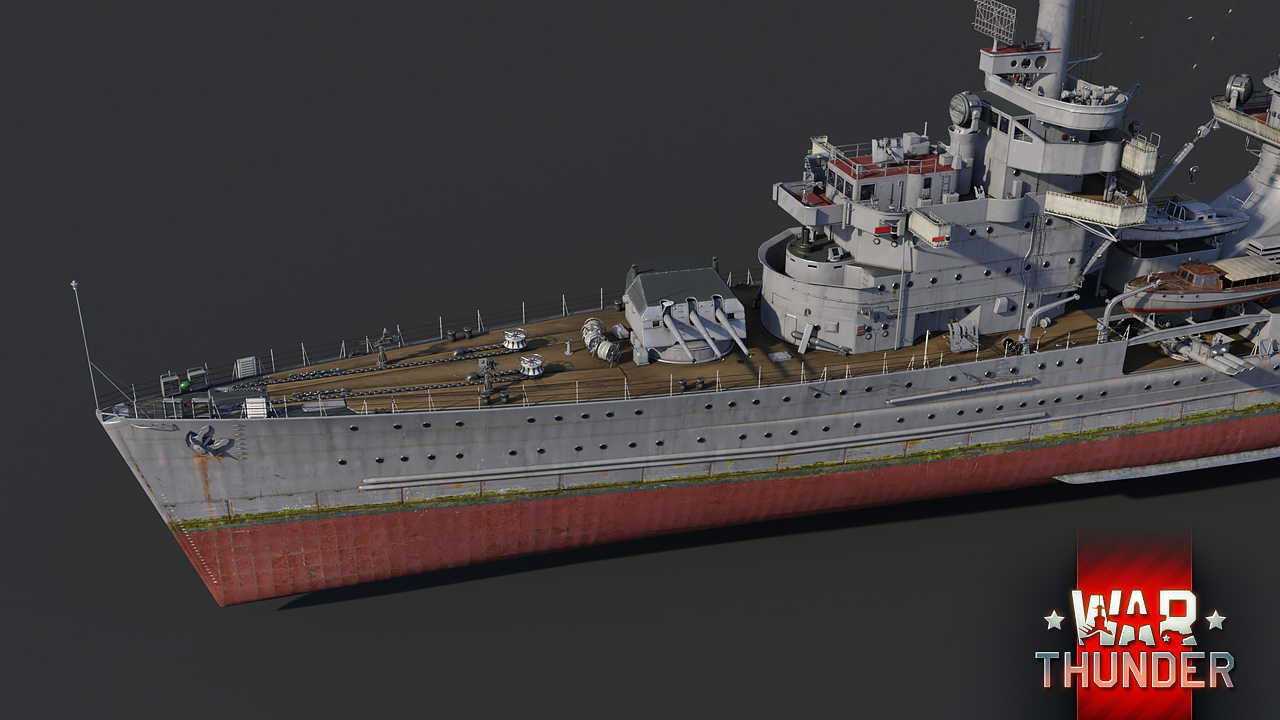 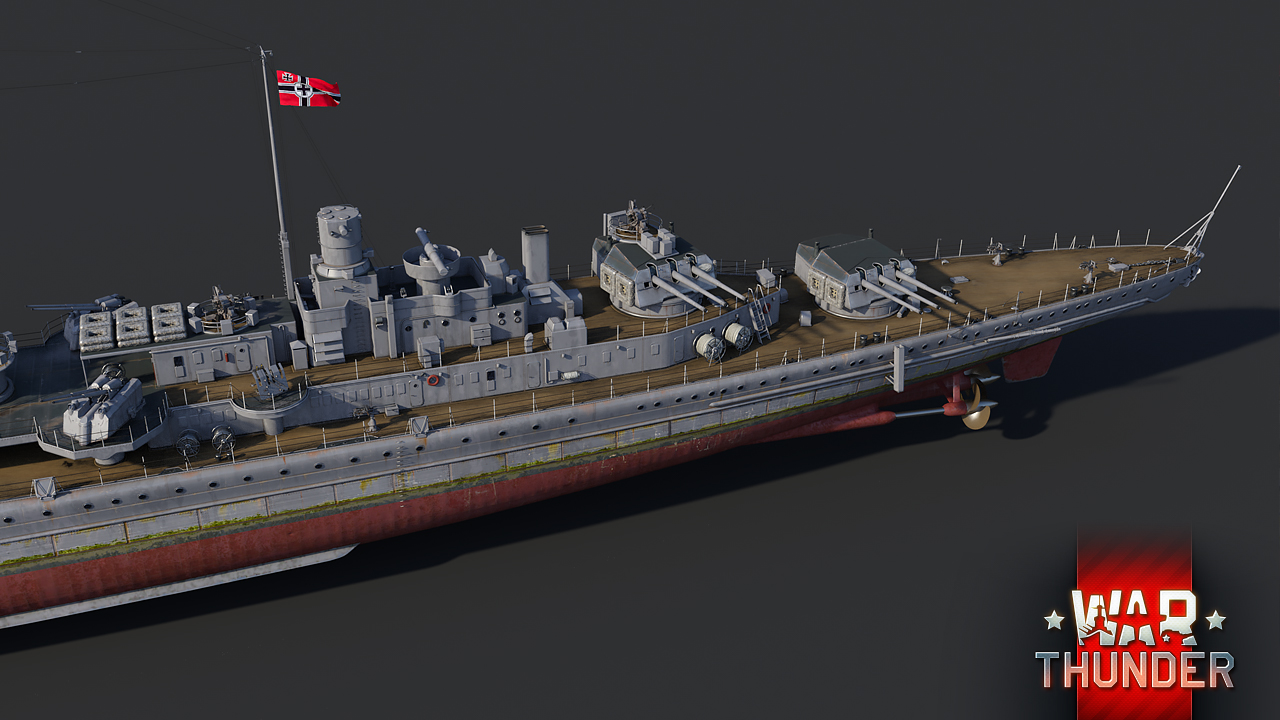 In War Thunder, KMS Nürnberg will be a new addition to the German light cruiser line, coming to the game with the upcoming update 1.87. This ship looks rather different from the Köln that precedes it, and captains will certainly appreciate its improvements - ranging from protection to firepower

However, this is where the firepower similarities between the two ships come to an end. Overall, KMS Nürnberg is fitted with a much greater number of secondary and anti-air weapon systems, but loses two out of its initial four triple torpedo launchers as a result. This reflects a late-war configuration of the ship’s armament.

That being said, KMS Nürnberg is fitted with four dual 8.8cm secondary battery turrets, two single 40mm, six dual 37mm, seven single 20mm, two quadruple 20mm Vierling and another six dual 20mm Zwilling anti-aircraft turrets. Thanks to this ferocious auxiliary armament arsenal, getting close to KMS Nürnberg will be a difficult task to achieve for both smaller vessels and aircraft in particular, making attacks from larger distance a much safer option.

KMS Nürnberg features a neigh identical armor layout as the Köln at first glance. However, looking past the 50mm thick belt armor will reveal an additional layer of 25mm thick angled armor, creating a highly effective turtleback armor profile, similar to that found on the Emden. This will significantly reduce the odds of the ship’s box citadel being severely damaged inside by shots that initially penetrate the outer belt armor, thus greatly increasing survivability as a result.

As for the mobility, of KMS Nürnberg remains very similar to that of the Köln, captains will have to maneuver more carefully and make greater use of the improved protection.

KMS Nürnberg is already steaming at full speed ahead towards War Thunder naval battles. Be sure to stay tuned to the news for more information regarding the next major update coming to the game. Until then, calm seas captains!

Commenting is no longer available for this news
Rules
Genewen
27

Guys, I don't know how often we have to tell you before you get it: the German navy ships DID NOT HAVE NATIONAL DESIGNATORS AFTER 1921. Excuse the capslock, but you don't seem to read when writing normally. German navy ships used SMS until 1920, after the naval reforms of 1921 German ships did not have a designator. That means no "KMS". Its name is just "Nürnberg" or at most "Leichter Kreuzer Nürnberg", just like the Köln and Emden. Please get that fixed. It's an eyesore to the knowledgable.

I'll pass it to the team.

Ouiche, thank you! Much appreciated.

Sure, they didn't have prefixes, but even historians use "DKM" or "KMS" because it's a good way to differentiate between ships of the Kriegsmarine and the Kaiserliche Marine. Although I don't think Gaijin will be adding ships of the latter so there really is no need for them.

Goodcaptinkirk, why would I care what bad historians who use wrong namings and designators do? If I wanted to look at crappy "science" I'd watch the History Channel. Its proper name does not contain DKM or KMS, and that's how it should be named in this game as well. What's your point anyway? "Let's keep using wrong terminology because others have done it, too"? What is there to be gained by naming it wrongly?

btw when will you remove the "KMS" in the name of the german CL's, it was never used by the germans

Never, they need to have it to remind people that american and british CLs want to kill themselves when they fight emdens and kolns

Where do the extra "KMS" designation came from though? Some mistranslation by historians? Seems to be very widely used.

Wow, Good job the Nürnberg looks amazing. Can't wait for this update to come out. Keep up the outstanding work.

It looks amazingly beautiful, however i still fear how capable it will be at countering the Brooklyn...

It won't be. This is just wrong.