The Gazelle is a family of light French helicopters developed in the late 1960s by the Sud-Aviation company, whose newer modifications are still being used today. The Gazelles will form the backbone of the French helicopter tree, coming to War Thunder with update 1.87!

Development of the Gazelle began in 1966, after the French Army issued a set of requirements for a new helicopter to replace the Alouette II. Sud-Aviation (later Aérospatiale) began working on the project immediately and came up with a prototype within a year. The prototype, designated SA.340, conducted its maiden flight in April 1967 with success.

Further development of the helicopter continued, with the subsequent model - the SA.341 - receiving several improvements. Among them was the replacement of the conventional tail rotor with a fenestron tail, which integrated the tail rotor into the tail section. At this stage of development, the British Westland Helicopters company also became involved as the work turned into a joint project between the two companies, following an agreement signed in 1967.

Production of the SA.341 began in the late 1960s, with slightly differing models being produced for French and British armed forces. The first models entered service in the early 1970s. The helicopter would prove itself to be quite a success, which prompted further development to be pursued.

The Gazelle also turned out be just as much of a success on the export market as it was with its initial operators. The helicopter type was widely exported to countries around the world and was even produced under licence by Egypt and Yugoslavia.

Although the Gazelle has long been replaced by newer helicopters, such as the Eurocopter Tiger for example, the type is still in active service with numerous nations today, including Great Britain and France. In total, over 1,750 Gazelles have been manufactured by 1996, taking into account all variants. These vehicles have been involved in many fighting conflicts, and are now used in Syria for Syrian army operations. 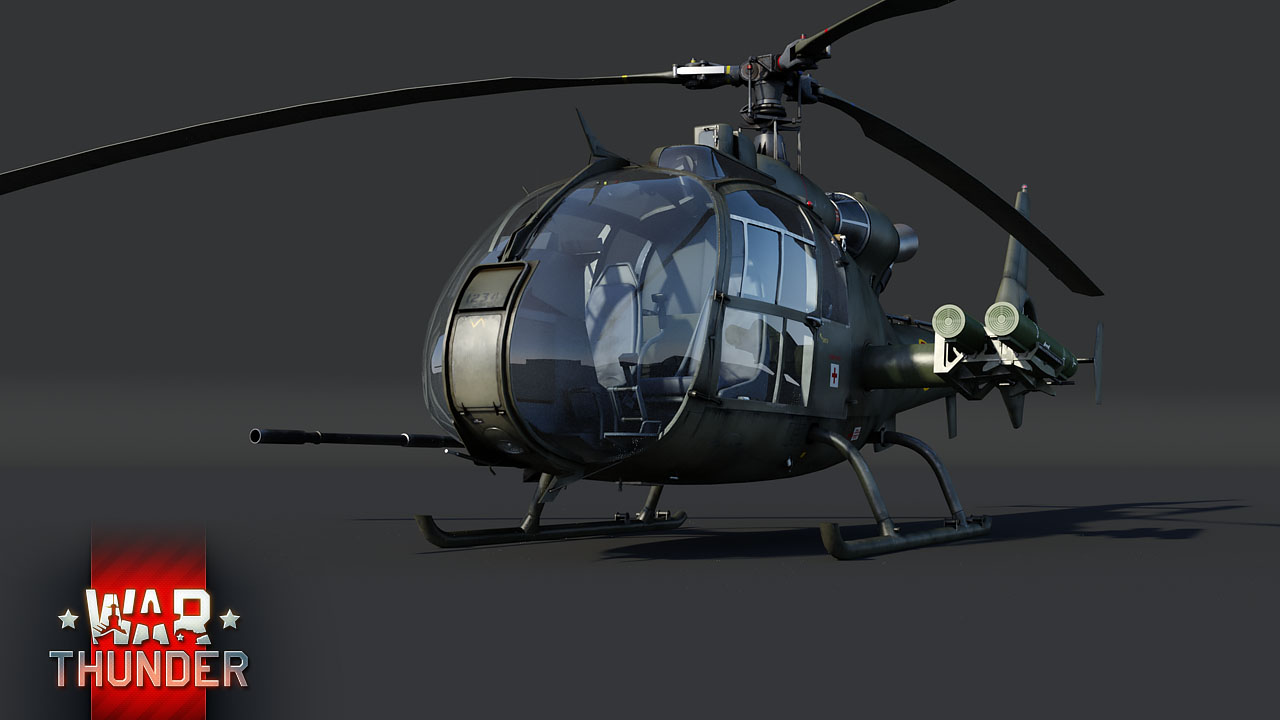 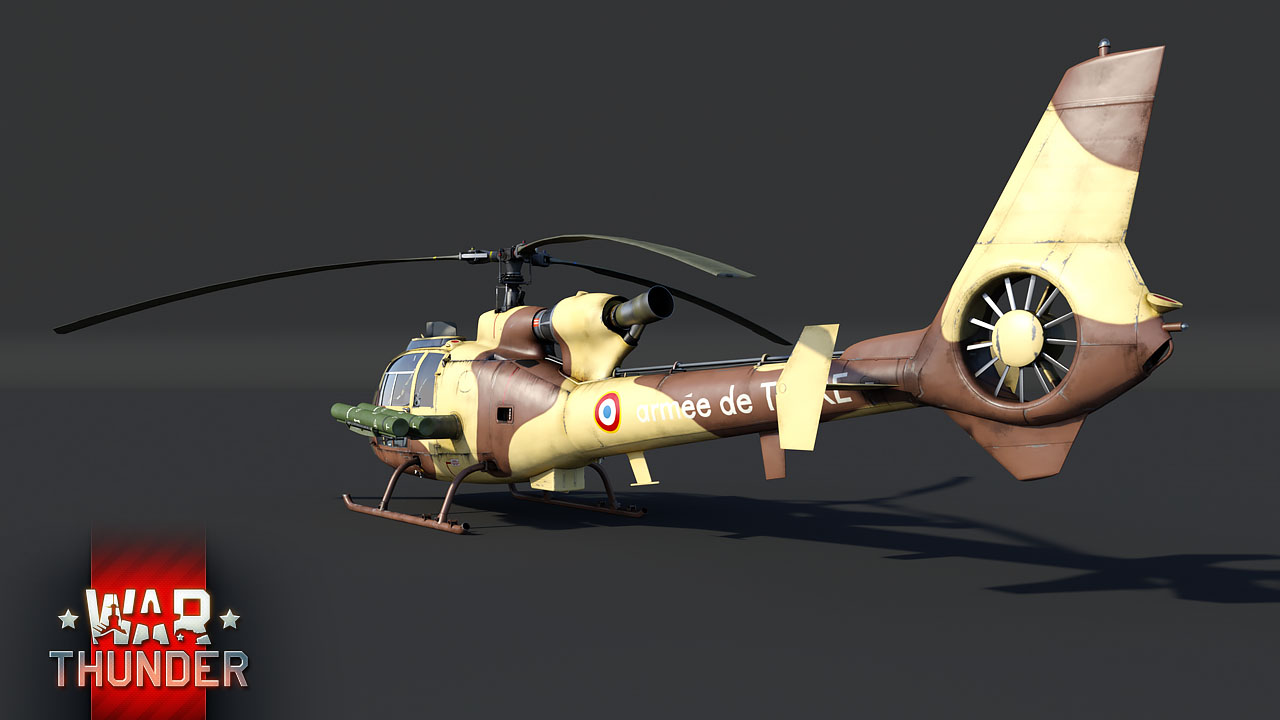 The SA.341F is the base model of the Gazelle used by the French Army. It’s powered by a Astazou IIIN turboshaft engine, generating 600 horsepower. In turn, this power allows the SA.314F to reach a maximum top speed of 310 km/h, whilst maintaining excellent maneuverability at both high and low speeds.

Fun Fact: The SA.341 was the first helicopter in the world to feature a fenestron-type tail. This innovation gave the helicopter excellent speed and maneuverability, allowing it to break two world speed records simultaneously in May 1967.

The SA.342M represents a further developed modification of the Gazelle. Unlike the SA.341F that precedes it, the SA.342M is fitted with a more powerful Astazou XIV turboshaft engine, generating 870 horsepower. While this change didn’t notably affect the vehicle’s speed, it did allow for further modifications to be made, most notably when firepower is concerned.

Contrary to the SA.341F, the SA.342M loses access to the 20mm cannon and instead, offers a unified weapon loadout for both sides of the fuselage. As a result, the SA.342M can carry all of the secondary weapons found on its predecessor, but twice as many as, thanks to the removal of the 20mm cannon on the right side of the fuselage. However, this also means that the SA.342M will have a harder time defending itself from attackers due to the lack of conventional forward-facing weapons.

The Gazelles are already well on their way to player hangars and are scheduled to arrive to the game with the release of the French helicopter tree, coming with War Thunder update 1.87. In the meantime, make sure to stay tuned to the news for more information regarding the next major update coming to the game. Until then, safe flying pilots!

IAR 316B Pack is now available to pre-order!

Commenting is no longer available for this news
Rules
Nyanpasuuu
30

Great, another helicopter that'll kill me from 10 km away while I can do nothing about it. Thanks gaijin, very cool.

Not how it's gonna work in the next update. There will be more news on this soon, so keep an eye out on that.

That's awesome i hope we get a new modern MBT for french maybe tier 7 :) Leclerc proto? or the normal maybe?

You spammed this "where muh Leclerc" so much that i'm starting to hope that Leclerc doesn't come this patch...

__Gripen__, that's because you're not a good person, now were is my Leclerc gaijin please

The Leclerc won't be in update 1.87. The major addition for France this update is their Helicopter branch.

Food for the OTOMATIC :D! Jokes aside, excellent models and great additions!

every flying thing is a food for the OTOMATIC, but that's fair. in the real they use that cannons on the ships today.(maybe with little upgrades)

ProtectorHUN, You mean everything that exists is food for the OTOMATIC?

We need Leclerc or any other vehicle that we can use in top tier, AMX-40 is not enough and its not competitive like the other nations MBT`s, also the repair costs made the whole French ground forces tree unplayable.

Now, give me the leclerc ;)

Why not add the British one ?

One step at a time! We're just starting to add helicopters.

Ouiche, Not really they've been in for a while now and we were told that every nation will get helicopters why not exploit the fact Britain and France make use of similar helo's namely gazelle and lynx, to add both at the same time.

TBH, when I saw the title of this dev blog, my first thought was "great. they're gonna give French helicopters to Germany and.... I guess UK now too?" Sorry, but I'm happy they didn't do that.

WieGottin_FR, Brittan could actually use helicopters

Well, cool, but ya pretty much just skipped Britain and Japan. Going out of order I see? When can we expect the top tier German premium jet?

Very odd indeed, consider how Japan and UK been in the game since pretty much the existence of WT.

I_NAMELESS_I, IN B4 ELECTRIC LIGHTNING!!!

Okay. I generally tend to complain a lot in here... but for once I'm not gonna. I was hoping for a Leclerc dev blog, this is still an excellent surprise.

be happy for what you got