The M1A1 is a later development of the well-known American Abrams MBT, which primarily introduced major improvements in firepower. Soon, War Thunder tankers will have the chance to command the arguably most iconic version of the Abrams, coming to the game as part of update 1.87. Buckle up!

Briefly: A later modification of the Abrams MBT, fitted with a licence-built version of the Rheinmetall 120mm smoothbore cannon.

Almost as soon as the first production M1 Abrams MBTs began rolling off the assembly line, did American engineers begin working on an upgunned version of the Abrams. They succeeded in this endeavour in 1981, after a prototype Abrams, designated M1E1, was successfully fitted with a 120mm Rheinmetall smoothbore cannon.

Showing promising performance, work on the vehicle continued. At the same time, an upgraded version of the original Abrams, the IPM1, which featured improved protection and a larger turret was briefly produced between 1984 - 1986. The resulting M1A1 Abrams inherited the upgrades from the IPM1 and combined them with the M256 120mm smoothbore cannon, a licence-built version of the German original.

The M1A1 was adopted for service in 1984, and was produced alongside the IPM1 for a short while since 1985 until the older modification was phased out of production.

The M1A1 saw its first use during the U.S. deployment in the Gulf War in 1991. Faced against arguably inferior Soviet-era tanks, the M1A1 had successfully proven its worth in tank-on-tank engagements, but exposed new problems concerning its performance and vulnerability in urban environments. This led to further upgrades for the vehicle being developed later on.

Production of the M1A1 seized in 1992, with over 5,800 units being produced, including Egyptian and Australian export models. The original M1A1 chassis still serves today, albeit as upgraded variants which have undergone several modernization efforts. 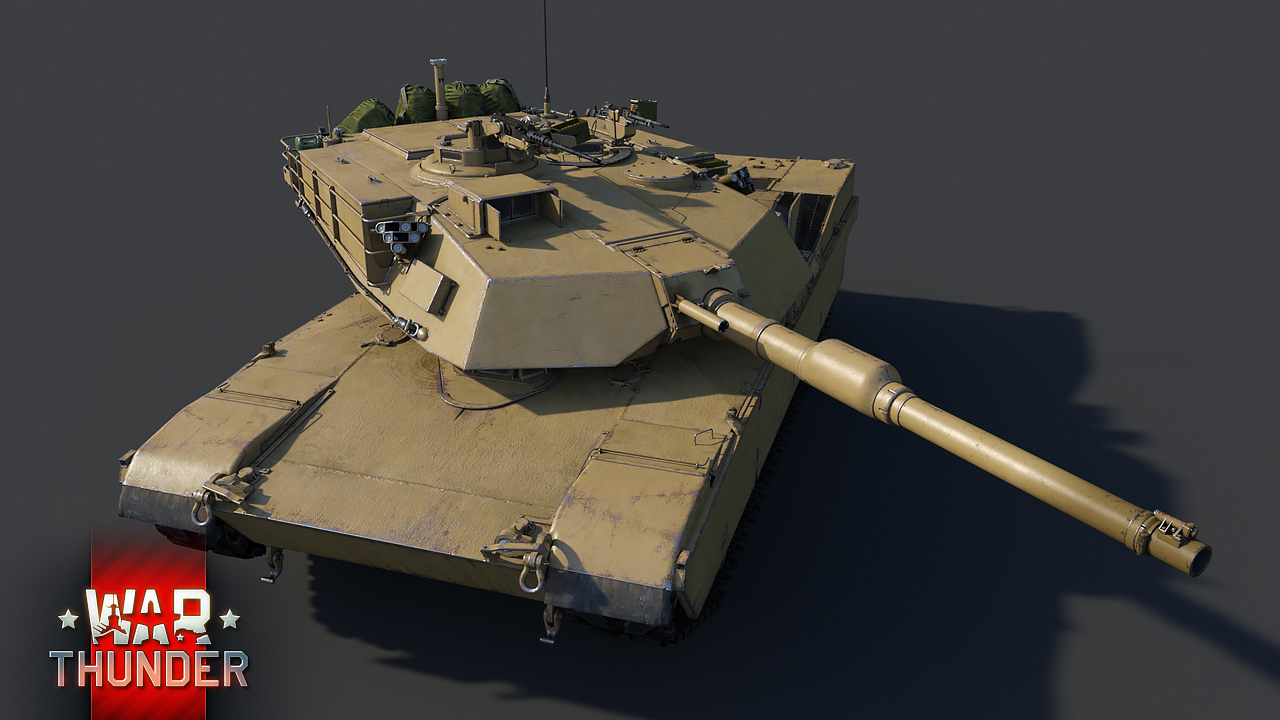 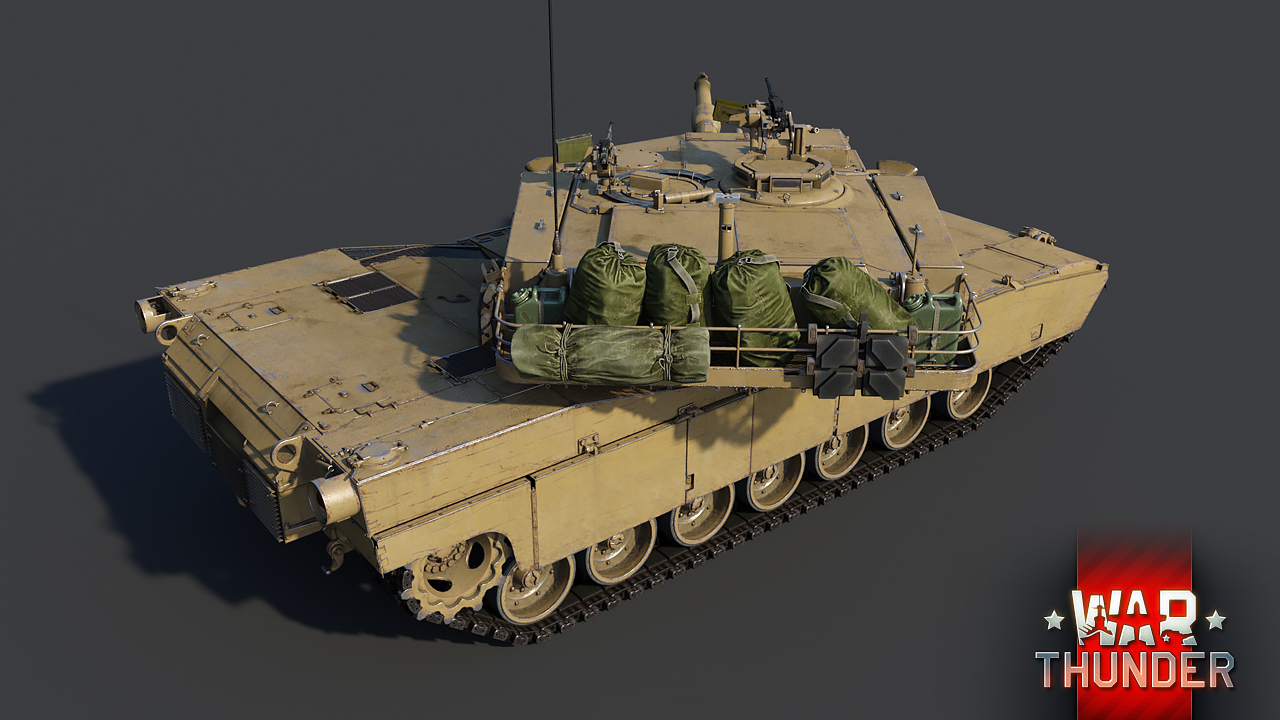 In War Thunder, the M1A1 will be among the first vehicles available to tankers at the upcoming seventh rank of the American ground forces tree. Compared to existing modification of the Abrams in War Thunder, the new M1A1 will combine the protection offered by the familiar IPM1 with the upgraded firepower provided by the newly-installed M256 120mm smoothbore cannon.

As a licence-built version of the well-known German Rheinmetall 120 cannon, American tankers can expect nothing short of superb ballistic properties from this excellent gun. Apart from very good ballistics, the M1A1 will offer its commanders with the usual set of powerful ammunition types - APFSDS and HEAT-FS rounds.

Players who have already had the chance to employ the IPM1 in combat are very aware of the levels of protection that particular version of the Abrams offers. Fortunately, the M1A1 uses the same turret as the IPM1. Thus, players can come to expect neigh identical levels of protection as far as the turret is concerned, but still shouldn’t rely too much on the hull to absorb any enemy rounds as it doesn’t have such efficient protection.

However because of all the modifications the overall weight of the vehicle has increased to just short of 59 tons. As the M1A1’s gas turbine engine remains the same as on previous models and continues to output 1,500 horsepower, the mobility of the vehicle took a slight dip. To be specific, the top speed of the vehicle dropped down to 41.5 mph (66.8 km/h) on roads and the vehicle also accelerates slower due to the increased mass.

Nonetheless, the M1A1 will remain a highly potent vehicle despite the negative impact the upgrades had on driving performance. Most notably, the highly sought after 120mm smoothbore cannon will allow American tankers to engage hostile targets at longer ranges and with greater effectiveness than ever, while remaining a tough nut for opponents to crack.

Meet the new M1A1 Abrams, coming to top ranks of the American ground forces tree. In the meantime, be sure to stay tuned to the news for more information regarding the next major update. Until then, happy hunting tankers!

Commenting is no longer available for this news
Rules
Conte_Baracca
47

As a former M1A1 tanker I must say your model looks fantastic. As a Marine, I ask, that when the M1A1 (HA) inevitably comes into the game could you model it after the Marine version (different smoke grenade launchers External Auxiliary Power Unit (EAPU), and we hang the spare roadwheels and track in different places. If you want to be super cool you could do the Firepower Enhancement Package (FEP) version with the Stabilized Commander Weapon Station (SCWS) which allows the .50 to fire acc OTM

Marines, the Club of t... i mean the tip of the spear.

Hmmm, how about I will pay the sticker price, but I would like AAA road side assistance and fire protection plan included. What do you say, deal? ;)

Can we get a camo fix on the M1a1 currently it’s not using any of the right camos that it used. Even the flat desert is wrong it should be way brighter

Not upgraded armour? T-80s and Leopard 2A5 are gonna yeet on this thing like there's no tomorrow

This model had same armor as IP model IRL... We will have to wait for M1A1 HA model.. Btw abrams will never be in disadvantage with his mobility and firepower... + best survivability

you are not tired of today's prohibitive statistics of Americans and you want to continue? The Soviets don't even have half of that statistic. Think before you write nonsense

The armor we have on the M1 and IPM1 are just awful against everything it faces! Don't lie to us about "excellent protection" unless you add the Depleted Uranium inserts to protect against fragmentation!

Also I would like to add even then, everything it faces can pen it from every angle and at every part of the tank with ease. Not even the turret cheeks can protect against things like the T-80 and Leopard 2A series!

FlippidyDippidy, mimimiimimimim I need to learn how to flank in my murica tank mimimi i cant lolpen and make the germans and russians suffer anymore mimimimi my 90% winrate mimimi

So the tank in game have best mobility, best ammunition with fastest reload, along with best survivability and best lineup. No, players still gonna complain that it doesn't have best armor

NightFalcon, Best lineup? Please, give me money or nerves to get that lineup. Or try flying in helicopter battles at least once, to see how much jackshit they give you there.

Will this get its historical 3-color NATO camo (similar to the 3 color CARC on the Germans)? 4 color ("late") Was extremely rare on the M1A1..please?

Not sure right now, but we'll forward the request.

Ouiche, Thank you also can you look in to the desert camo currently it’s incorrect it should be a lot brighter then it is.

The video shows the four color...but you are right the normal paint schemes are Tan, Green, and Three color.

oh look another Abrams with the best round in game. As if they needed it.

CheckYoPrivilege, Except the 2A5 has far inferior mobility, due to increased weight (5 tons) compared to 2A4 with no engine upgrade.

And with 150mm of armor against kinetic penetrators in turret.

SoloWing_Makarov, Only in dev server.. It'll end with the same protection as M1IP.

As an American soldier, I love this

This is great food for my Leo 2A5, time for some German BIAS!