HMNZS Leander is the lead ship of the British Leander-class light cruisers, which primarily served under the flag of New Zealand during WW2. In update 1.87,  captains and fans of British warships may look forward to the addition of the Leander to the ranks of the Royal Navy in the next major War Thunder update!

Briefly: A new British light cruiser featuring all the best qualities expected of other British ships of this class.

Initially, five ships of the Leander-class were ordered in the early 1930s, with HMS Leader as the lead ship being laid down in September 1930. Leander was completed a year later and commissioned into service in March 1933. Initially, the warship served with the New Zealand Division of the Royal Navy, before being transferred to the Royal New Zealand Navy after its formation in 1941. From there onwards, the ship sailed under its new designation HMNZS Leander.

Leander primarily served in the Pacific theatre during WW2, taking part in several smaller operations during her early service life. Leander was also briefly stationed in the Mediterranean, supporting allied troops in actions against Vichy France during the Syria-Lebanon campaign. After that, Leander once again returned to the Pacific, where she was severely damaged after an engagement with a small Japanese task force in July 1943. The damage suffered from a torpedo hit was so severe that it rendered Leander inoperable for the remainder of the war, until she was repaired in August 1945.

HMNZS Leander only had a very short post-war service life. The warship was officially decommissioned in 1948 and sold for scrap in 1950. 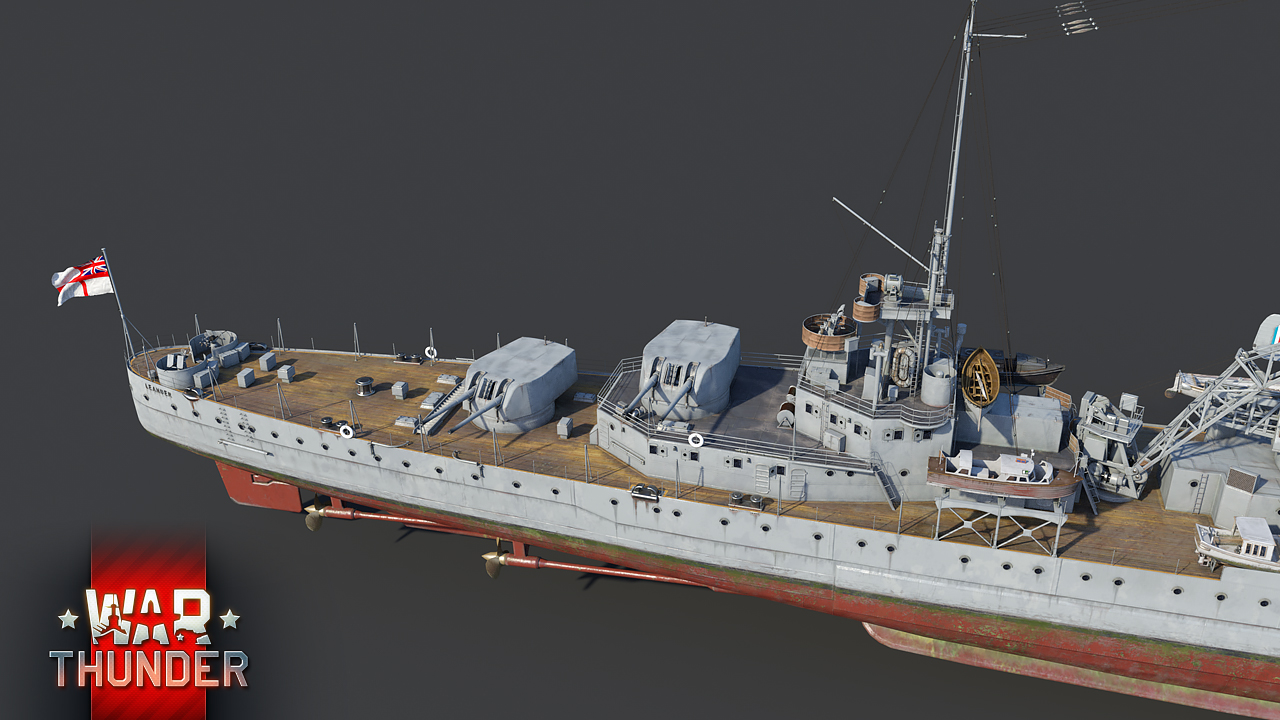 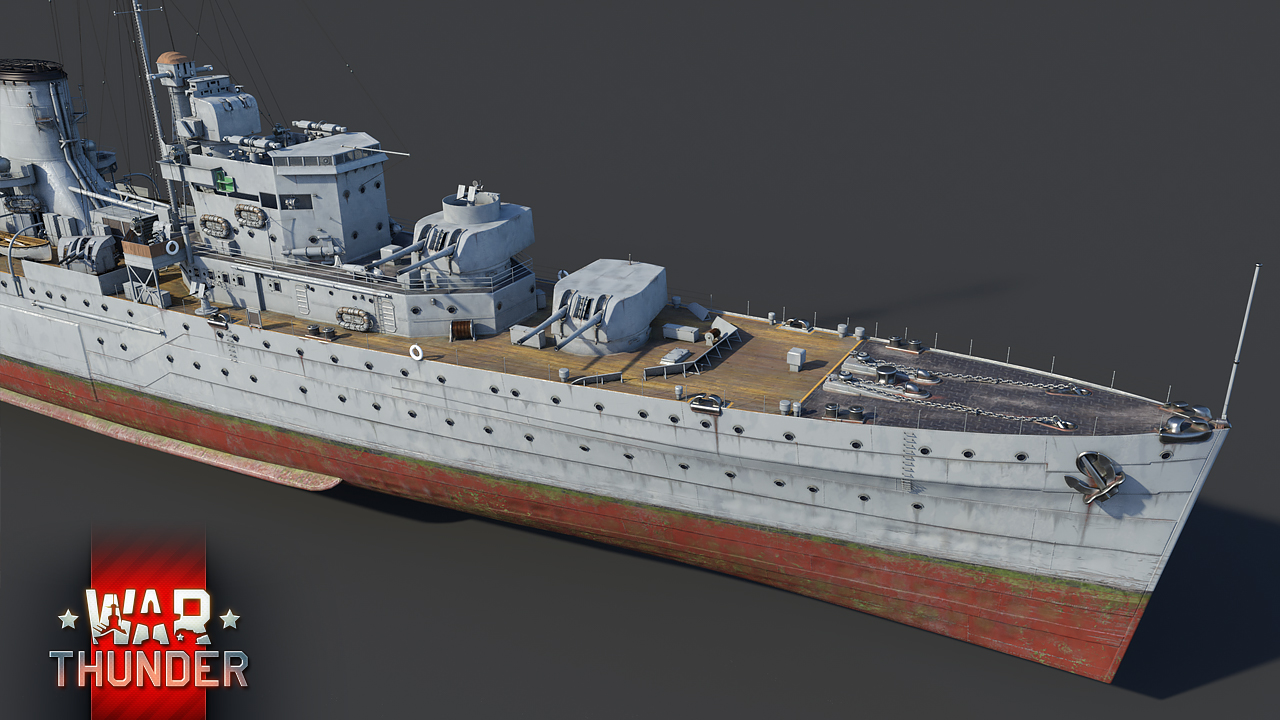 In War Thunder, HMNZS Leander will become available to all captains as a new light cruiser of the fourth rank of the British naval tree with the release of the upcoming update 1.87.  The Leander features typical mobility, firepower and protection for British light cruisers of the time which makes it a highly versatile “jack of all trades, master of none” type of warship.

As far as firepower is concerned, HMNZS Leander represents a sort of middle ground between the existing HMS Dido and HMS Enterprise light cruisers. The Leander’s primary armament consists of four dual 6-inch (152mm) cannons, thus she has less main calibre weapons than the Dido (8 against 10), but a higher calibre and weight of fire (the Dido’s main calibre is 133mm). The Leander features the same calibre main guns found on the Enterprise, and more of them at that (8 against 7) and they are better situated, allowing all main calibre guns to fire from one side, thereby allowing captains to comfortably engage any target they may come across on the battlefield.

Leander’s secondary and anti-air armament matches that of similar ships. Fitted with four dual 4-inch (102mm) cannons mounted in open turrets, five single 20mm auto cannons and three quadruple Vickers heavy machine guns, in addition, Leander also sports two quadruple 21-inch (533mm) torpedo launchers on either side of the hull. The ship is more than capable of defending herself against smaller vessels and air attacks, but may quickly get overwhelmed if attacked by a larger number of opponents, especially aircraft.

Fun Fact: Leander, like all ships of her class, was named after a character from Greek mythology.

Leander’s six steam turbines, powering four propellor shafts, generate 72,000 shaft horsepower, in turn allowing the ship to reach a respectable top speed of 32.5 knots (60 km/h). However, Leander’s steam turbines are placed very close to each other - 3 in a row from each side, and are all linked to a single funnel. This means that a single penetrating shot to the mid section, or high-explosive salvo hitting the funnel, may cause significant power loss.

Fortunately, Leander does possess 3-inch (76mm) thick belt armor plating, typical for British light cruisers of the time. While this won’t completely mitigate the possibility of shots penetrating the ship’s hull, it does certainly reduce the chances of it happening at longer ranges and greater angles.

HMNZS Leander is steaming at full speed towards War Thunder naval battles! Until then, be sure to stay tuned to the news for more information regarding the next major update coming to the game very soon. We’ll see you on the high seas captains!

Commenting is no longer available for this news
Rules
Firnen_
16

Even if you don't want to give those float planes any use in naval battles (for now), please at least add them to the air trees at the same time as you add them on the ships!

People demand so much. Look how much newcontent there is this patch.. I doubt they will waste precious resources to push this update out on the implementation of un-needed reserve tier aircraft that 99+% of the playerbase will never play.

Being able to spawn in a float plane in ship mode and launch from your own ship would be uber cool even if it's one use per spawn.

Love this ship. Have for a long time. But, I have to say, not cool that everyone else gets a 5.7 cruiser except Britain. I mean...it's not like the Royal Navy didn't have a LOT of choices here.

In dev server, Leander 's gun spread is ridiculously large. Is this bug?

*TheLastYouSee__, It's actually not. The dispersion isn't random, four of the shells are almost dead-on the aim point, and the other four are also dead on the same point, but that point is several hundred meters back and to the right. This is pretty consistent single-firing each barrel as well as using salvo fire. Pretty sure it's a bug.

Not Only Leander, but Dido also have the same trait that the two guns from a single twin-mount turret have different trajectory, resulting in two shell groupings that's accurate on its own, but two groupings are far from each other. Didn't test other vessels with twin-mount turrets, and ships with triple-mount turrets (from other nations) seems free of this issue.

A very nice vessel though the HMS Bellfast or any of the Town class light cruiser would be more equally matched to the brooklyn woth twelve 6 inch guns. Never the less this is a great addition

Or a colony class...or the Exeter with 6 8 inch or maybe the Hawkins with 7 x 7inch...I mean....It's the Royal Frickin Navy...lots and lots of option

The ship looks great with decent armament (for a 5.3 ship, that is) but I'd like to see an equivalent 5.7 ship for Britain too seeing as the other nations are getting them. Town class light cruisers are more comparable in terms of armament and armour to those newer ships. I'd love to see things like HMS Belfast, Edinburgh, etc.

I’m not sure why you guys chose to you to use the name HMNZS Leander I looked up the Leander-class cruiser’s after seeing this on the Dev Server as I’d never heard of that name and found out that the Leander-class has two more well known names than Leander like HMS Ajax & and HMS Achilles that fought that the German cruiser Admiral Graf Spee. So can we please get a name change to HMS Ajax or HMS Achilles? Much better known names and deeds.

Leander has the benefit of being the lead ship of her class. Plus, don’t you mean HMNZS Achilles - after all, Achilles and Leander were the two major fleet units operated by the New Zealand Division, and both ships became HMNZS when the Royal New Zealand Navy was formed in October 1941.

joshwagstaff13, Yes I see you are right about Achilles having the HMNZS but even so Achilles is a more well know name