The Type 16 MCV is a modern Japanese wheeled tank destroyer, developed in the early 2000’s for rapid deployment in the event of an outbreak of hostilities. Coming soon to War Thunder with update 1.89,  Japanese tankers in the game may look forward to including this highly sophisticated war machine into their high tier lineups!

In the early 2000’s, Japan sought to develop a new combat vehicle to extend the operational mobility of their armored units. Furthermore, the new vehicle was supposed to counter the limitations of existing tracked vehicles, be able to rapidly respond to emerging threats in the event of an outbreak of hostilities and possess the ability to be airlifted or ocean transferred to more distant areas of operations, such as the Japanese island of Okinawa.

Thus, in 2007, engineers at Mitsubishi began development on what would become the Type 16 MCV. To satisfy all the requirements, it was clear from the onset that a lightly armored, yet highly mobile and well-armed wheeled vehicle would need to be developed. Already, by 2008, the order for four prototypes was issued, with deliveries going on until 2013.

Army trials of the vehicle went on until 2016, when after successfully passing them, it officially entered service with the JSDF under the designation “Type 16 MCV”. Production began in the same year (2016), and is still ongoing today. Presently, around 100 Type 16 MCVs have been built and commissioned into service, with no units seeing combat action thus far.

In War Thunder, the Type 16 MCV will be a new addition, coming to rank VII of the Japanese ground forces tree with the release of the upcoming update 1.89. Sharing not only a certain degree of visual similarity, but also performance with the Italian B1 Centauro, the Type 16 MCV will provide Japanese tankers with a unique new tank destroyer, which thanks to its design, is unlike any other found on previous ranks!

Similarly to a number of existing high-ranking Japanese ground vehicles, namely the Type 74 family, the Type 16 MCV too is armed with a 105mm rifled cannon, which forms its primary armament. This, in combination with the presence of familiar ammunition types, including the very powerful Type 93 APFSDS round, will not only allow experienced tankers to easily transition over to the Type 16 MCV, but will also allow them to dispatch enemies just as effectively. 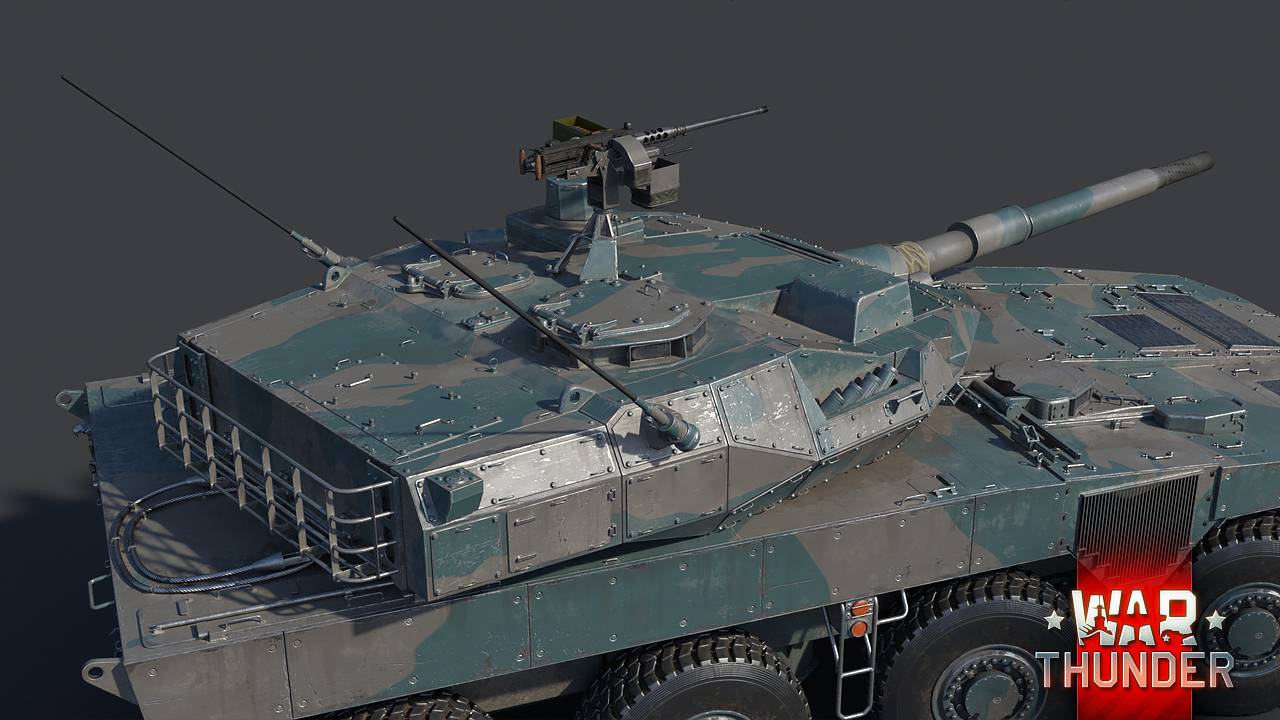 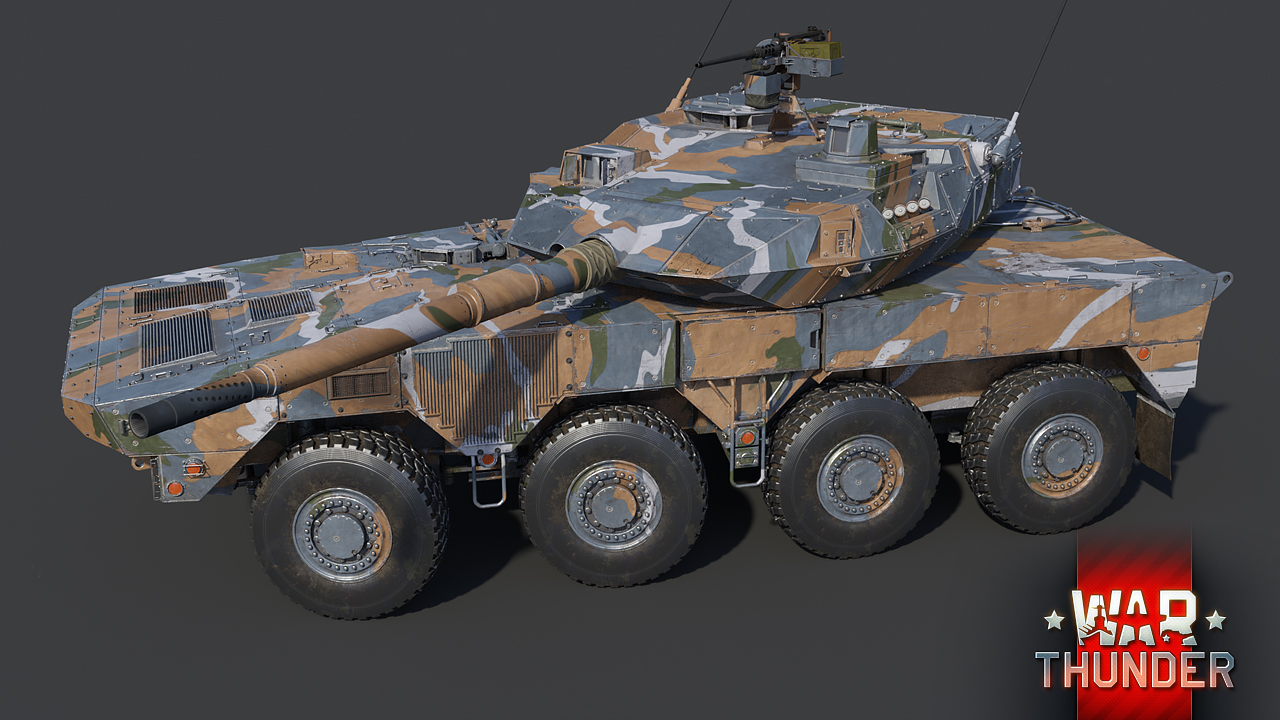 For those tankers that always felt like the Type 74 wasn’t mobile enough, well, they’ll be in for a ride with the Type 16 MCV. Quite literally! Although possessing similar firepower to its tracked counterpart, the Type 16 offers unrivaled mobility when compared to any other Japanese ground vehicle currently in War Thunder. Being able to achieve a top speed of 100 km/h on roads thanks to its 570 horsepower engine, the Type 16 MCV is sure to leave no tanker with a soft spot for mobility unimpressed.

However, while mobility and firepower are the definite highlights of the Type 16, its protection is certainly such as can be expected from a light wheeled combat vehicle. As such, the Type 16 can, thanks to highly angled and spaced armor on the front sections of the hull and turret, deflect smaller caliber cannon fire and less effective chemical rounds. The vehicle’s sides and rear however, are protected well enough to only absorb high-caliber machine gun fire, while anything larger than that will likely pose a serious threat to the internal modules and crew.

Furthermore, the Type 16 MCV is quite a large vehicle for what it is. In fact, its height is comparable to most top MBTs currently present in the game. Therefore, aspiring commanders of this machine will have to rely on not just getting the most out of its excellent mobility and firepower, but also on clever positioning and tactical maneuvering in order to circumvent this notable drawback.

The Type 16 MCV will become available to all players at Rank VII of the Japanese ground forces tree with the release of the upcoming update 1.89. In the meantime, make sure to stay tuned for more news on the next major update coming to the game very soon. Until then, happy hunting commanders!

Commenting is no longer available for this news
Rules
Zergser
19

Funally japan gets a high mobility Tank hunter, been waiting for it for a while, the grind will be miserable but im still happy to see it

It is great and all but this thing is not a 9.3 vehicle. Why would this thing be a better vehicle for Type 90 line up when Type 74 can use the same Type 93 apfsds, has better armor, smaller profile, better mobility on difficult terrain because it is tracked vehicle. Why is the Type 16 at 9.3 ? it is much larger, worse armor, it will not do 100 km/h unless the whole map is made of asphalt, it will struggle to move on sand and snow, same shell as Type 74, it doesn't even has scout ability.

I_NAMELESS_I, I simply just can't see what Type 16 does better than Type 74 and why would it be the replacement to Type 74 and as a new support vehicle for Type 90 ? In my opinion Type 16 should go down to 8.7, you can say the same for the Centuaro ROMOR.

Can you please implement new sounds for wheeled vehicles? They all sound like a milk truck from the 30´s... :S

They have recently announced the new coming sound engine. that will come along with an updated sound library.

Agree. 3rd person sound is better but inside sound is like...truck

I love you Gaijin, I hope you know that.

Ouiche, you lovebirds are cute :P

It's a great addition ! We need more wheeled vehicles. But the problem with Amx10RC is it's still a TD ingame while it is a scout tank in reality, and has moving abilities of a GAZ truck (type "War Thunder: Amx-10 RC testing" on youtube to have a good time). Wheeled vehicles deserve a better handling guys !

War_Gaming_NL, There is actually variant with module "Бережок", which has 30mm 2A72 as well as ATGMs.

I found an interesting wheeled vehicle for the french from the 1950s, it's the Panhard EBR.

Yes. It's only a "Con" if hullbreak is implemented. Predicting they will "forget" to implement hullbreak again just as they did with the utterly broken and ridiculous VFW.

The gas gas gas memes are coming, i can feel them.

If you're Gas Gas Gas and he's Deja Vu, then I guess I'm just Running in the 90s.

Deja vu, ive been to this place before higher on the street and i know it’s my time to go...