The F-86K is the NATO export version of the American F-86D interceptor, developed on the basis of the well-known Sabre jet fighter. Having seen extensive use with nations around the world, the F-86K is now set to arrive in War Thunder as well with the release of the upcoming update 1.89!

Briefly: A new top ranking jet interceptor developed on the basis of the F-86 Sabre, featuring air-to-air missiles and an afterburner!

In March 1949, the North American company launched the development of a new jet interceptor, based on the existing F-86 Sabre, as part of a private venture. The new design was the first interceptor developed to be operated by a single crew member and utilized unguided rockets in combination with a complex fire control system, rather than conventional guns, in order to destroy its target. Already by April, the project had received official endorsement from high-ranking military officials and development of a production version began in parallel.

While a production contract was signed in October, the first prototype, designated YF-95, conducted its maiden flight in December 1949. In the early ‘50s, Soviet nuclear testing and the subsequent start of the Korean conflict led to an accelerated development of the YF-95. Despite this, problems during development caused production to be delayed, resulting in the aircraft reaching its first units only in March 1951. During the delay however, the designation of the aircraft changed to F-86D and it received its unofficial nickname “Sabre Dog”.

In January 1953, North American was approached by an offer from the Italian military to develop a twin-seater version of the F-86D armed with cannons. As the cost and necessary redesign work turned out to be too great, an agreement was made to produce the aircraft in its original design, but with cannon armament and a simplified fire control system instead. This new export version of the Sabre Dog received the new designation of F-86K.

Initially, the F-86K was produced exclusively in the U.S., but would later also be manufactured under licence by the Italian Fiat company. The F-86 entered service in 1955 and apart from the Italian Air Force, the F-86K also served with many other operators worldwide including France, West Germany, the Netherlands, Norway, Honduras, Venezuela. Around 340 F-86Ks were produced out of over 2,800 Sabre Dogs built in total. Most of the F-86Ks would be decommissioned by the late ‘60s, while some even went on to serve into the ‘70s. 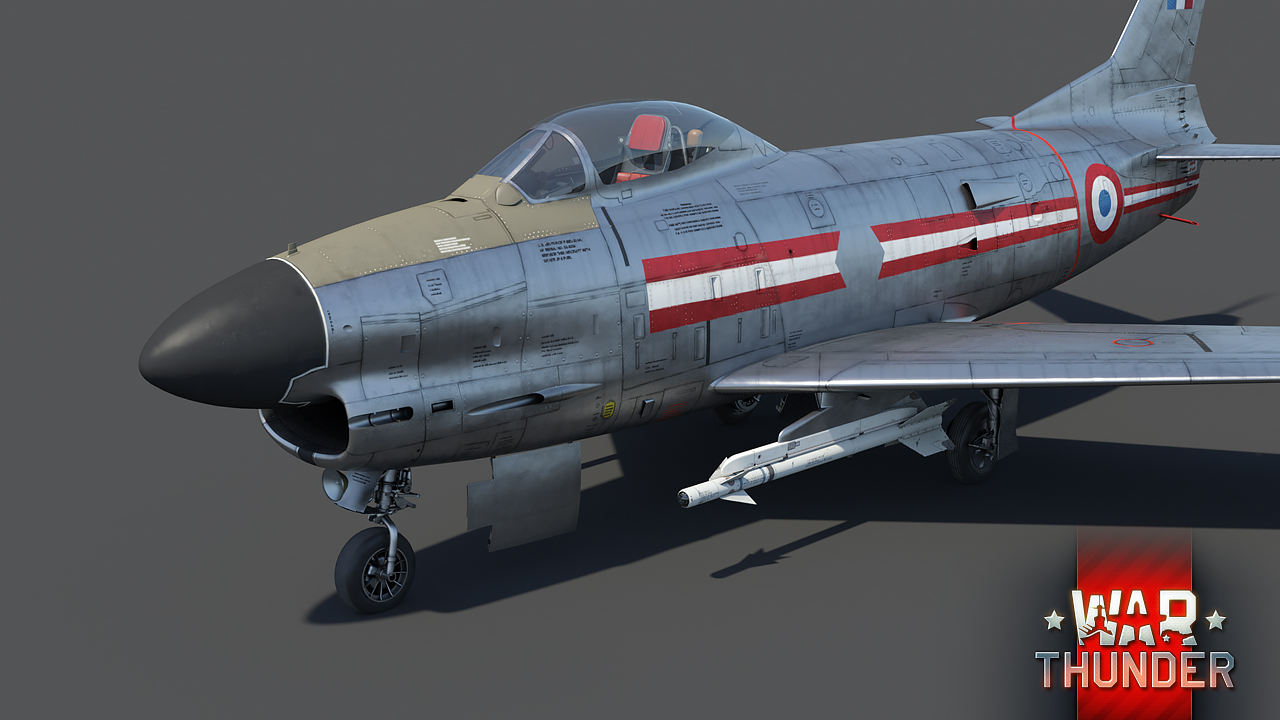 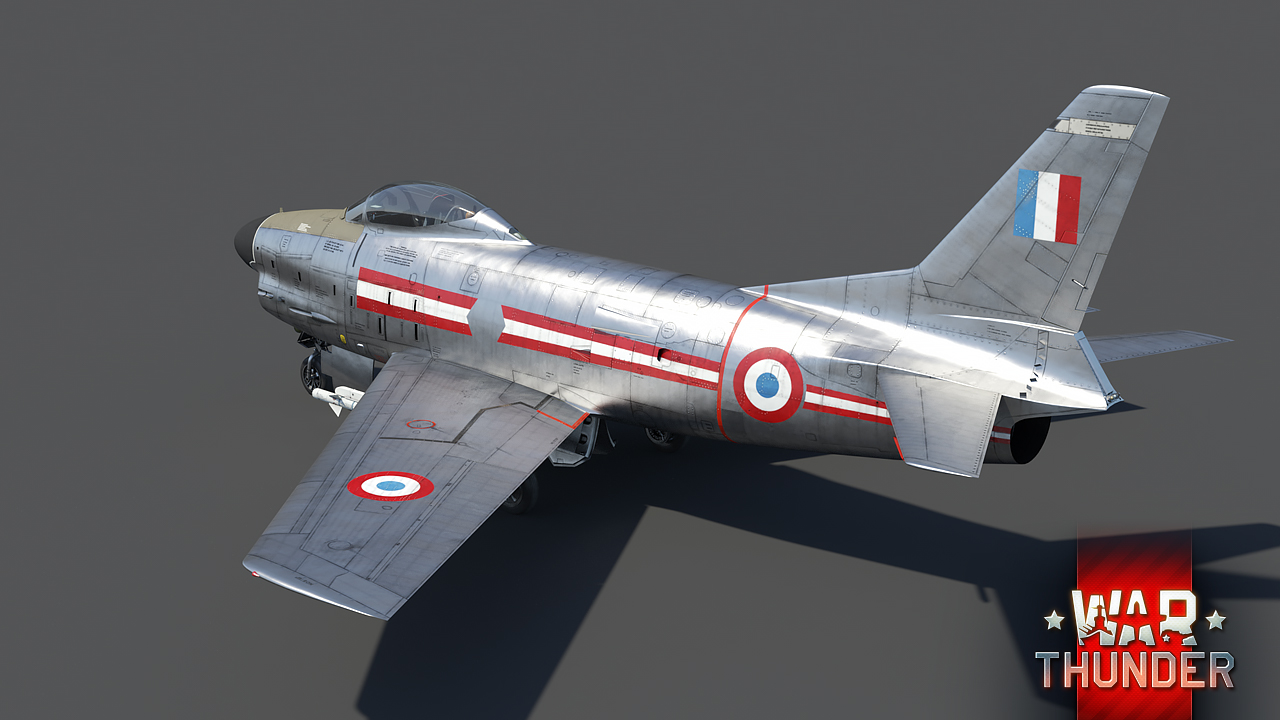 In War Thunder, the F-86K will be a new addition to the game, coming as part of update 1.89 and will be available to all pilots at the top rank in the French aviation tree! Although not quite being able to reach supersonic speeds, the transonic F-86K still offers excellent performance thanks to its afterburning jet engine and is sure to leave no one unsatisfied with its firepower either, with all of this being rounded off with radar capabilities too.

The F-86K is powered by a General Electrics J47-GE-33 turbojet engine, producing roughly 34 kN of thrust with the afterburner engaged. In terms of speed, this power allows the F-86K to reach a maximum speed of 692 mph (1115 km/h) at sea level. While this top speed certainly won’t set any new speed records in War Thunder, it will definitely get the job done when it comes to fighting sub- and transonic opponents of other nations and might even be enough to occasionally allow you to catch a supersonic foe off guard!

Fun Fact: The Sabre Dog was initially to be designated F-95, but had its name changed to F-86D instead, in order to make it seem like a variant of the existing Sabre and not an entirely new aircraft. In reality however, the F-86D was only about 25% similar to the original F-86 and the name change was only done to secure further support for the project.

As already hinted at before, the F-86K isn’t cutting any corners when it comes to firepower though. With its primary armament consisting of four 20mm M24A1 cannons, fed with a total of 528 rounds of ammunition, the F-86K is more than well equipped to make short work of most opponents that it goes up against. However, for pilots that prefer to get a bit more bang for their buck, the F-86K has something more on offer.

Namely, the F-86K can also be fitted with a pair of AIM-9B Sidewinders. Aspiring F-86K pilots may use these deadly missiles to extend their engagement range beyond that of their cannons in order to combat faster opponents or catch unsuspecting targets off guard. However, being an early version of the Sidewinder missile, pilots will need to be wary of its limitations and will often have to pick the ideal moment to fire the missile in order to achieve the best result.

The F-86K is inbound to War Thunder and will arrive as part of the upcoming update 1.89, being available to French pilots at release. Eager to find out what else the next content update has in store for you? Then be sure to stay tuned to the news for all the latest info and developments on the next major update coming to the game. Until then, clear skies pilots!

Commenting is no longer available for this news
Rules
Merlin1809
150

not even unhistorical...just plain wrong.

That's what Ouiche meant by "France will get some love"? WTF? France have enough self made jet ffs, give this one to Italy or Germany...

Hold on with them guillotines for a little bit longer. Just a friendly piece of advice. :)

CokeSpray, It really is putting a strain on my arms to hold the rope I hope you don't need me to hold too much longer :c

GeRmANY nEeDs JeTs should be the best joke in 2019. They got two decent Sabres (Looking at you CL-13s), two nice 262 variants (A-1 and C-2b), two literal rockets, and a supersonic top tier. In any case Germany should have more than enough jets compared to France. Also Italy might get it too, don't be sad.

kololz, "decent" xD winrates from 70 - 95% where nation like UK and US cant even come closly to Axis is op as fuck atm, so yea i would have liked something else for the French but better then giving bias even more stuff

Why France? It has many of it's own home grown options, Italy is the one who really needed it

viciceman, Jaguar? Mirage? What are you talking about? These planes are too modern for the current state of the game. Super Étendard would be nice, but we can get it when we have planes such as the Skyhawk, which will probably happen in the next 6 months. A far better choice would have been the Mystere IV

Both can have it though. Don't just think on a corner.

Hey you know how France has a lot of unique designs like early mirages or etendards? Nah fam just give them american jets xaxa ))))

Why? this plane was not needed, add the indigenous Vautour IIN? Fix the SMB.2? Or even the Mystère IV that should have been in the tree since its implementation?

Everyone know French nation is just a sub tech tree of America.. Gaijin please can we have at least ONE FRENCH at 9.0 with a good implementation? SMB2 performance when it was introduce was completely false. Even with the ninja fix, SMB2 still act weirdly. AMX10 RC was badly implement. Both Mystere II C is getting stomp match after match and Mystere II A no one use it. (It's a good news but we all know French have terrible problem to be competitive at high tier on both Air force and Ground Force)

Yes, yes and yes. Mystères have nothing to do at 9.0. Plain and simple. Even Thunder Show once compared them to La-200 (8.0) and concluded a draw.

FranciumFalcon, This video was the worst joke as frenchie from Gaijin. They litteraly say that Mystere II (9.0) is a draw with a La-200 (8.0) but still put Mystere II at 9.0. It's just inexplicable. Since their INTRODUCTION (1.77 november 2017) the community both French and international ask for a BR change FFS. More than 1 years we keep asking a competitive plane, many months we keep asking a COMPETITIVE line up for GF. Is it so hard to understand? France is unattactive for news and old players. Gaijin pls

Will we get Leclerc in this patch? France really needs something on top tier.

who cares about french tanks give us jap or german tanks insted :-)

mosha123, who cares about german tanks tanks give us French or British tanks insted :-)