One guided missile to demolish tanks and aircraft alike? You got it! War Thunder is on the cusp of featuring an air defence anti-tank system based on the Bradley IFV chassis.

The ADATS was developed at the end of the 1980’s as a general-purpose weapon capable of bringing down low-flying airborne targets as well as armoured opponents. Hence the abbreviation: Air Defence Anti-Tank System. The system was comprised of radar for detecting and tracking targets, a complex radio kit for coordinating multiple vehicles, and eight MIM-146 guided missiles in transport and launch containers. The US Army version was built on the Bradley IFV chassis and fitted with a 25mm auto cannon. Notwithstanding the fact that it was selected after a US Army competition for the Forward Area Air-Defence program, it was found to be excessively expensive to manufacture and never made it to serial production on the Bradley chassis. 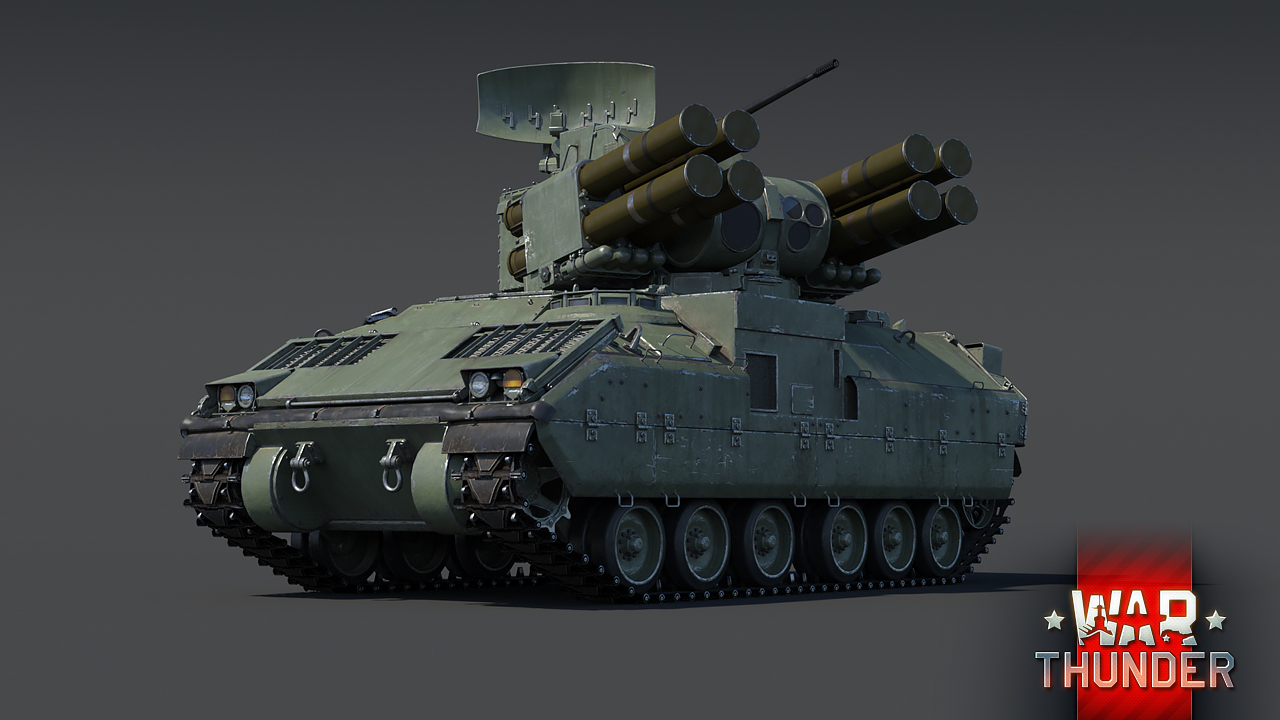 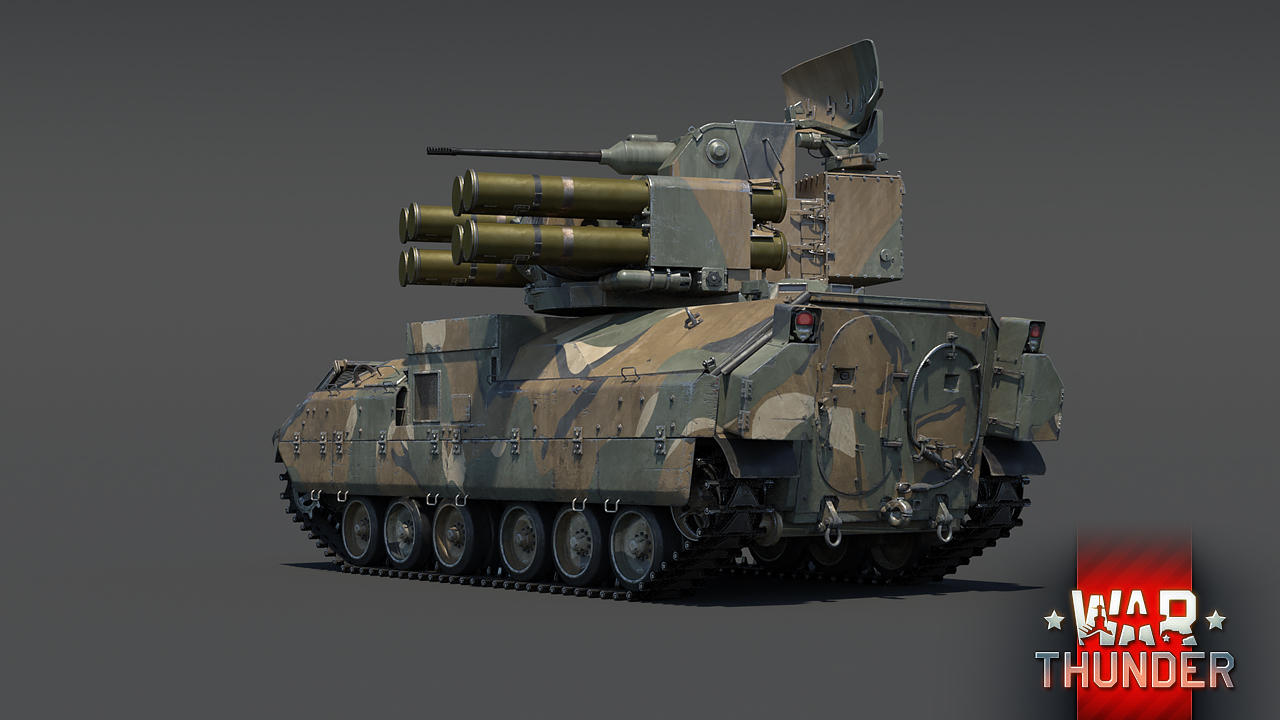 In War Thunder the ADATS Bradley will appear in update 1.89 at the rank VII of the USA ground vehicle tech tree. It’s average in terms of speed and manoeuvrability, its armour only stands up to bullets, and the hulking ADATS dimensions make it fairly conspicuous, especially when the radar antenna is active...

But who cares about that when you have your hands on the controls of a weapon capable of knocking out anything that crosses your sites? Eight all-purpose guided missiles with radio fuses will find their way to the sneakiest chopper in the sky, chase down fleeing aircraft, and even torch tanks – they penetrate up to the equivalent of 900mm of rolled homogeneous steel.

And the rhythmic chatter of the 25mm autocannon will be the last thing enemy anti-aircraft vehicles and IFVs hear thanks to the APCR shells that come even with the stock belt. Fantastic! Sure, the rate of fire leaves something to be desired, but having that cannon sure comes in handy when you really need it.

The ADATS Bradley is a worthy answer to the Tunguska when it comes to War Thunder’s fields of battle. One missile for any target is an unusual and promising solution. So, shall we see what happens with update 1.89 and put this vehicle through its paces in some higher-ranked battles?

Commenting is no longer available for this news
Rules
Drunken_Jedi
137

Did you not learn anything from the travesty that the Tunguska was? A single one of these can dominate the ENTIRE airspace, sniping helicopters and aircraft IN THEIR SPAWN many kilometres away. You're adding SAM systems from the 1980's and 1990's to combat 1950's jets with NO electronic warfare suite (RWR) or countermeasures (not that they would be useful as these are optically guided missiles). Not only that but vehicles like the Tunguska are easily killing MBT's with missiles. IT IS BROKEN.

We have been listening indeed. People wanted more advanced CAS / Helicopter counters and wanted ground vehicles to have a larger role. When we added the Tunguska, the number 1 most requested thing after this was equals for other nations. New systems and features will of course be added for aviation and ground over time as always, but this addition, as with most is one that was heavily requested.

Smin1080p, Just because a feature is 'requested' it doesn't mean the way you implemented it was correct. People wanted balance between helicopters/CAS and ground vehicles. There were many other options Gaijin could have implemented instead of a hopelessly lopsided mechanic with no counter. What about the Humvee or BDRM/BTR options which used MANPAD systems which could actually be countered with flares etc. If you add a hard counter like these SAM's you also need to give counters to them at the same time.

tbh cas deserves to be abused by SPAA's especially heli's

epiccheese, There is such a thing as balance between 'classes' of vehicles. There should at least be lock on times, make them be unable to fire missiles on the move (like IFV's). They easy fix for choppers is to make 'clean' aircraft who have no CAS munitions cheap so they can spawn and keep the skies clear. Currently all aircraft cost 720 SP whether they have bombs or not, THIS is what needs doing. Not introducing broken vehicles like the ADATS or 2S6.

Oh look, a vehicle that is going to compress the Meta even more!

the missiles are duel purpose, both Anti-air and Anti-tank.

WiseYeHunter, So yeah, it'll definately balance the tunguska but I can't say the same for Aircraft. They're gonna have a bad time!

this made me emit an involuntary noise of high decibels

Nice but how about that sale?

Ouiche, sir i will have you know that i have been looking at the news since the 4th.

Fans of aviation will have a many cool things to look forward too this update.

Jets are still waiting anti-radar missiles and countermeasures... We want to survive more that 5 seconds after we spawned you know.

Xtanol, Even more if you keep close to the ground and out of sight.

You can't counter optic tracking with countermeasures, dude. And as soon as anti-radar missiles show up people will just switch off radar and just use said optical-guided missiles without the radar. It's easy enough.

Genewen, If we get anti-radiation missiles, i'm sure we will get some of the more modern ones, that remembers the location of the source. That would give the AA just a few seconds to turn his radar the hell off, and escape the blast zone. If he reacts fast, he could avoid it, if he isnt paying attention, he is dead even if he manages to turn it off in time.

This is getting out of hand. We need anti radiation missiles for planes.

Nope its not Wink wink lol. All they are missing is Fat Man in the game and no pe 8 bomb is nothing so dont compair XD.