Kuma is the lead ship of her class of five light cruisers built for the Imperial Japanese Navy in the late 1910s and early 1920s. The Kuma-class will be the first light cruiser vessel awaiting captains in the highly anticipated Japanese naval forces tree, coming to War Thunder with update 1.89!

Due to the expectation that the Tenryū-class cruiser wouldn’t perform to the satisfaction of the naval command in its role of leader and the appearance of newer and faster destroyer types, with which the Tenryū wasn’t able to keep up with, the shortcomings of the Japanese small cruiser concept became evident. These shortcomings were further emphasized with the advent of the large American Omaha-class light cruiser, capable of easily outgunning the Tenryū-class.

Kuma, the lead ship of her class, was laid down in August 1918, launched in July 1919 and subsequently entered service with the IJN the following year, in August of 1920. Immediately after her commissioning, Kuma was deployed as part of the Japanese intervention in Siberia against Bolshevik forces.

During the early 1930s, Kuma underwent a significant refit and later took part in hostilities during the Second Sino-Japanese War, patrolling off the coast of China and assisting in landing operations.

Following the attack on Pearl Harbor, Kuma participated in the Invasion of the Philippines and would remain stationed there until August 1942. After a brief refit in September, Kuma joined the Dutch East Indies and New Guinea campaigns, being tasked with transporting troops and patrolling the local waters until late 1943. 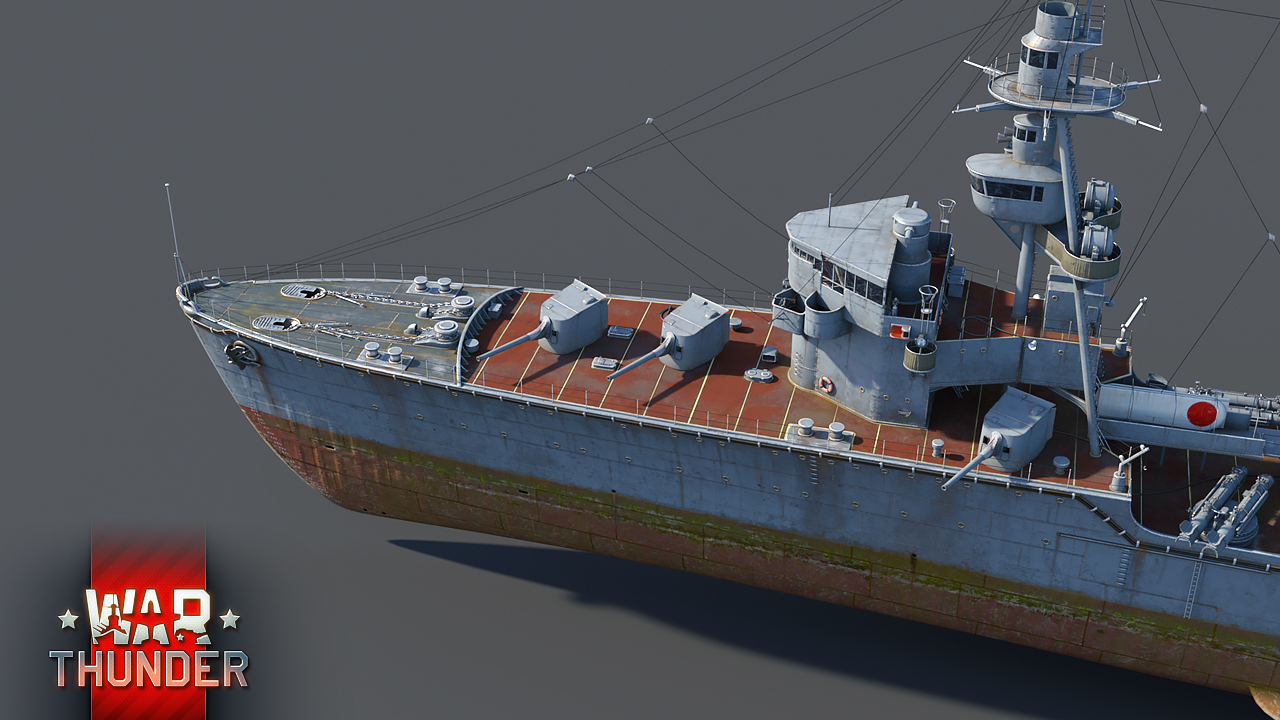 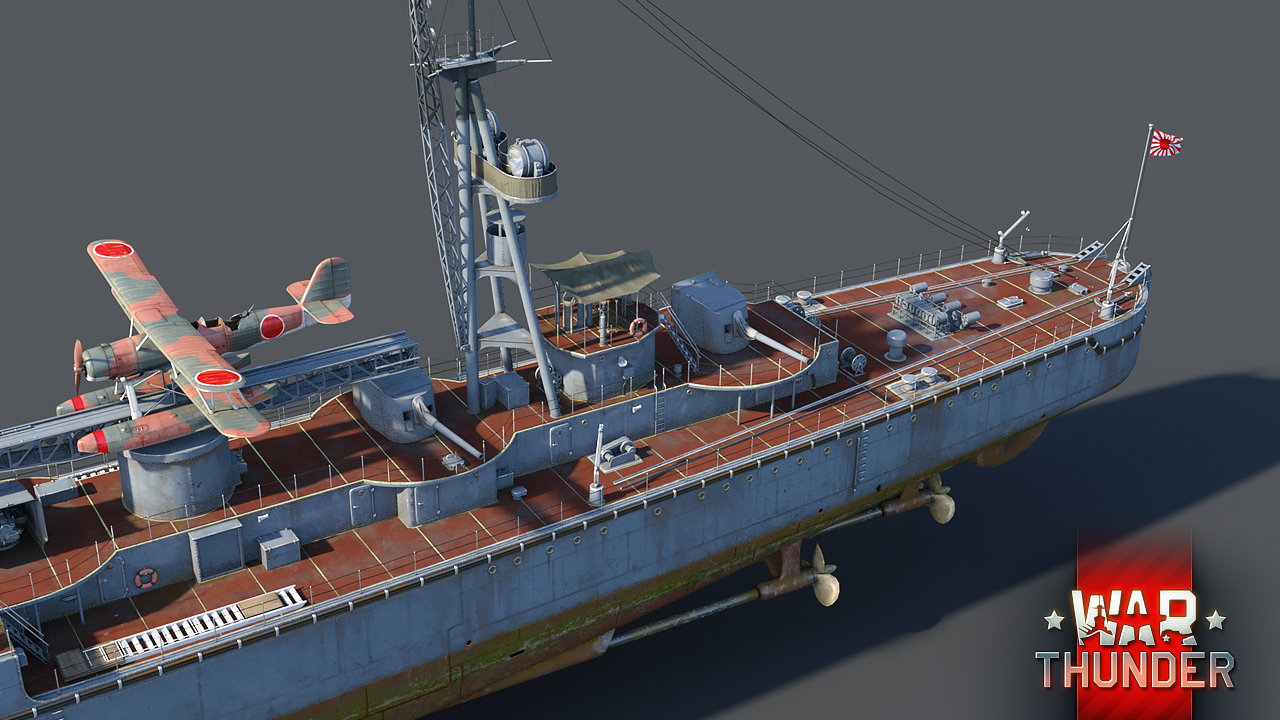 In War Thunder, Kuma will be the first light cruiser available to captains at rank IV of the upcoming Japanese naval forces tree. Lighter than any other cruiser in the game and sporting firepower and mobility which is quite decent for its age and design, Kuma will be the perfect starting vessel for both seasoned captains, eager to progress down the Japanese cruiser line, as well as those who have only just begun to familiarise themselves with large warships.

Contrary to light cruisers of other nations already present in War Thunder, Kuma takes the “light” part of its light cruiser classification a whole lot more seriously. While the average displacement of existing light cruisers in the game sits around 6,970 tons, Kuma’s only goes up to 5,500 tons. The far lower displacement, coupled with the 90,000 hp output of its steam turbines, gives the Kuma unmatched agility and allows it to reach an impressive top speed of 36 knots (67 km/h).

While good mobility is certainly a welcomed quality for any warship, aspiring captains of the Kuma will quickly learn that their survival and performance in battle is closely tied to their ship’s mobility. Although the ship’s armour protection is average, with 63mm forming the belt and 32mm plating protecting ammunition compartments, it is capable of shielding the ship from damage inflicted by lighter vessels relatively effectively, though Kuma remains highly vulnerable to air attacks.

With only two single 80mm multipurpose cannons and two rifle-calibre machine guns forming Kuma’s auxiliary and anti-air complement, the ship will present itself as easy prey to skilled pilots and cunning MTB captains alike. Therefore, Kuma captains will always have to remain vigilant and aware of their surroundings, while taking advantage of the ship’s mobility to perform quick defensive maneuvers in order to avoid enemy fire, both the kind found above and below the waves.

However, in stark contrast to its auxiliary weapons, Kuma’s primary and torpedo armament are quite formidable, especially when coupled with the ship’s mobility. Namely, Kuma’s primary armament consists of seven 140mm quick-firing cannons, of which six can be brought to bear on a target at once. Complementing the primary guns are also four dual 533mm torpedo launchers, found on either side of the ship and featuring faster reload times than other similar armaments, which can be quite handy in quickly taking down more potent adversaries or for resolving a heated close-quarter dispute.

Commenting is no longer available for this news
Rules
Drake0ne
21

Is that a new sinking animation I see at the end... Cool beans Gaijin.

This ship was a monster in Battlestations: Pacific... will be interesting to see it ingame!

I see you're also a man of culture.

CokeSpray, I've played a bit of that game and managed to beat one of the levels in the campaign that my brother couldn't complete.

oh i miss that game

Is there plan to add Torpedo Cruiser Oi or Kitakami that were modified Kuma-class cruisers?

They might work in WT if the team damage remains disabled. *Flashback of The-Naval-Game-That-Shall-Not-Be-Named*

If the aircraft on this ship has any guns on it IRL. Can we pls get it in the Tech tree :)

should be a feature in the game. spotter planes were significant factors in most WW2 Naval Combat not for defences as a deterrent but more too control fire adjustments etc artillery spotterplanes slow moving agile as fuk

GoonyGooGoo, And they would get shot down in this game by the players in their vastly better planes they can spawn in relatively easily. This mechanic would be a waste of time under the given meta.

Glad to see these DD Leaders represented in game. Would be an interesting addition if we could launch the aircraft off the ships to assist with spotting and thawting air attacks. Not too dissimilar to how World of Warships handles spotter aircraft on larger vessels. I'm glad we're seeing more diversity in the ships in Naval forces however as far as the actually gameplay and bredth of mechanics it's VERY bare bones. For all of its faults WoWS has interetings 'class' play with smoke, hydro etc.

how would you handle it though? AI plane that flies around just to get recked by enemy AA gunners? or swithing between the direct control of the ship and plane, having the plane fly in a straigt line and having the ship sail in a straigt line when controling the other, but the ship guns go to the AI mode we already have in game? flying a plane and not grounding your ship would require serious micro... I might just like that idea.

I expected a news item about the Vday sales haha! But this is nice too.

no sales this year...

tozo, Not true. It's not Victory Day yet.

theScottishKoala, there was this one youtuber who basically predicted the japanese nay on point... and I think it was a colaberation with Gaijin!... I can't remember the name of the guy though. must have been twoand900