The Messerschmitt Me 264 is a German strategic bomber, initially developed during the late 1930s as a long-range reconnaissance aircraft. In the upcoming update 1.89, pilots may look forward to getting the chance to fly  aircraft of the well-known German Amerikabomber project!

Briefly: A German WWII heavy bomber, capable of carrying a bomb load of up to 4 tons!

Development of the Me 264 began in the late 1930s when Messerschmitt conducted work on developing a long-range reconnaissance aircraft, designated P.1061. In early 1941, six prototypes of the P.1061 were ordered and the aircraft received the formal designation of Me 264. However, the initial order for six prototypes would shortly afterwards be dropped to three.

Progress on constructing the ordered prototypes was slow at start, but development quickly picked up the pace with the start of the Amerikabomber project in spring 1942. The project called for new very long range strategic bomber designs, resulting in several designs being proposed, among them also the Me 264.

It soon became clear that despite all the advantages of the Me 264 the aircraft would not be able to demonstrate acceptable flight characteristics due to the lack of more powerful engines at that time. Apart from the Amerikabomber project, the Me 264 was also briefly considered by the Kriegsmarine as a possible replacement for the dated Fw 200 in the maritime reconnaissance role.

The first and only prototype of the Me 264 which saw completion, flew on 23 December 1942. While undergoing modifications, the Me 264 project had its further development halted, with the sole completed prototype being used as a transport machine. In 1943, the second prototype was destroyed during an allied bombing raid. The same fate also struck the first and unfinished third prototype in July 1944. After all prototypes were lost, the Me 264 project was officially cancelled in September 1944. 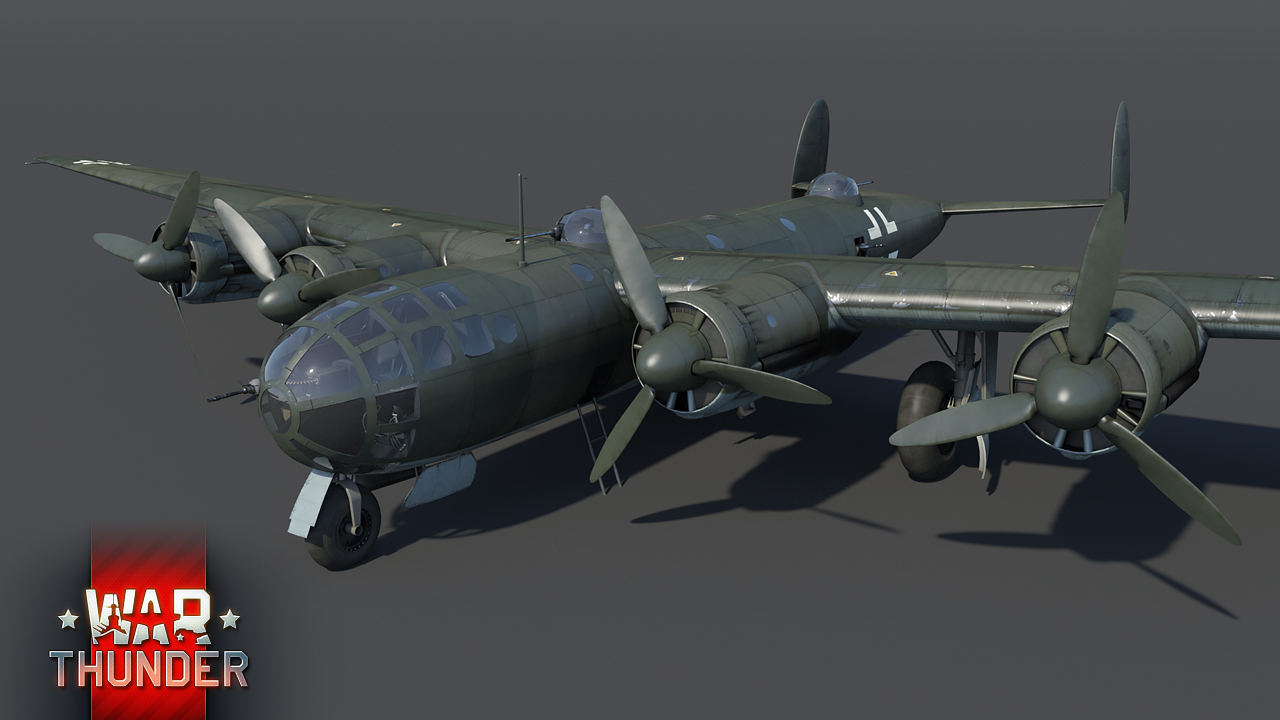 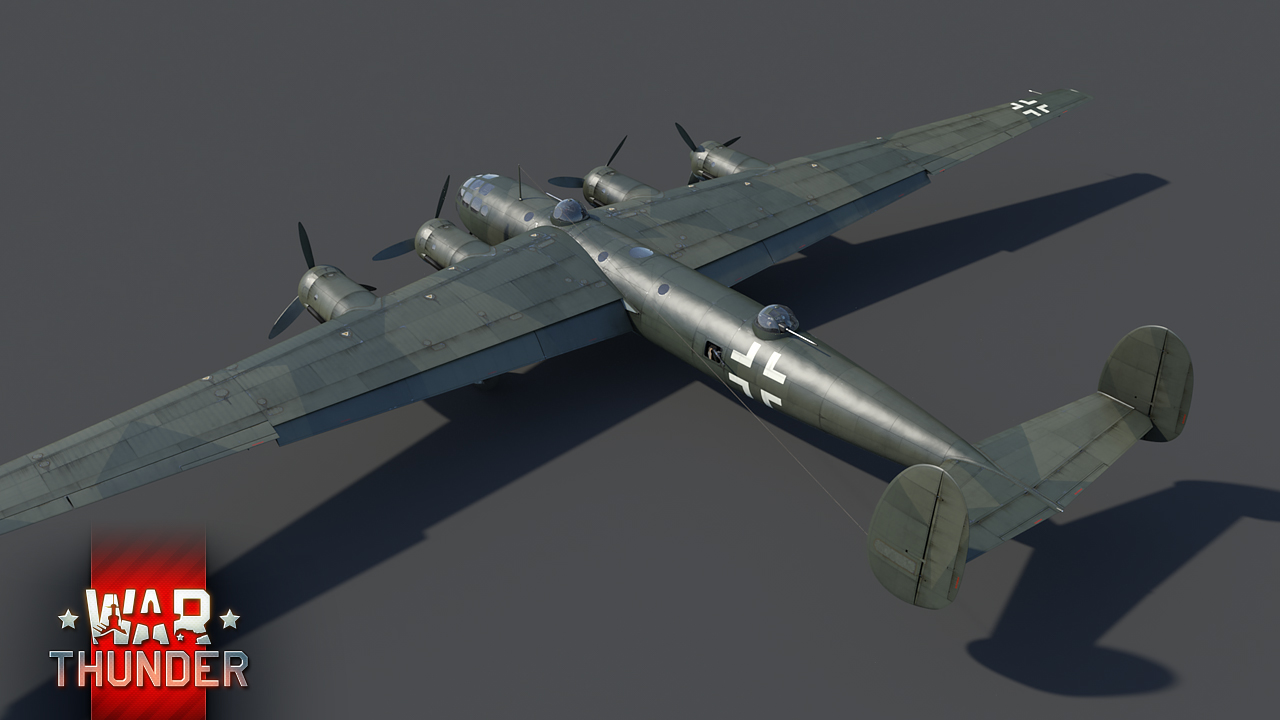 In War Thunder, the Me 264 will be a new heavy bomber, coming to rank IV in the German aviation tree with the upcoming update 1.89. Compared to the existing He 177, the Me 264 offers a more ‘slow and steady’ approach, due to its larger size and rather cumbersome flight characteristics, but retains excellent defensive capabilities as well as payload options.

Fun Fact: The Me 264 was the first aircraft in the world to incorporate integrated wing fuel tanks into its design. This feature has become the standard for most modern aircraft today.

Protecting the aircraft from hostile attacks are a number of defensive turrets scattered around the fuselage. That being said, the Me 264 has access to four 13mm MG131 heavy machine guns as well as two 20mm MG151 cannons which will be sure to make any attack run a daring undertaking to say the least. However, certain blind spots in the aircraft’s defenses, such as directly beneath it, can become a serious problem if the enemy is aware and takes advantage of it, so aspiring pilots of this aircraft should bare this drawback in mind!

Last but not least, the Me 264’s bomb load, while not as impressive as that of the He 177, is still quite considerable and will most certainly be responsible for causing ample destruction among the enemy lines. With its total payload going up to 4,4 tons, pilots of the Me 264 can choose between a variety of different bomb calibers and ordnance presets, ranging from 250kg bombs to the mighty 1,800kg SC1800 bomb!

Commenting is no longer available for this news
Rules
Firnen_
51

Wasn't the Me 264 able to load way more than 4 tons for short range missions (like the one's we play ingame)? Only 4 t is not a lot for a heavy bomber, some of the better, short range configurations should also be added imo.

It never actually carried any of those payloads. The payloads called for in the original design (including "overload" were far too much for it to handle when they got the V1 prototype to the preliminary flight testing stage (in fact Messerschmidt had to hand the project over to Dornier in 1943 for this). The plane had many issues with not only weight but also stability even on the ground trying to take off with newly adjusted weights of 5K Kg (and even here this was after they added longer wingtips for smaller bombs and they could not achieve this weight either) (for the V1 prototype). They subsequently tried using additional drop off take off gear, rocket assist, adding 2 extra engines, converting it to jet engines. and even contemplated in air refueling to make it all work, but in the end, it was not feasible and they closed the project for several reasons. So the initial design loads are not anything close to what it was able to actually achieve in real life.

FryingTigerWT, Thanks for the Info.This should really be added as Historical Info to the Post.

Even for long-range missions it had 8 tons of bombs. And 14 tons for close-range.

SoloWing_Makarov, Which begs the question why don't we get similar loadout setups for B-17s and such?

The plane could not carry more than the current load. In reality, the prototype never even flew with bombs at all. This is a heavily requested aircraft. Players have been asking for this aircraft since 2013. Not every aircraft added will always be the top of its class, but this was indeed one that many wished to see in game.

Smin1080p, Be careful what you wish for! Seems like they were thinking it could do more (besides, the He 177 is a better, more utilitarian design).

In close range it could have a payload of 14 tons they say. Medium-close 8 tons

DamnJerry, It never got that payload and those were estimates before it actually flew. Once it flew, those estimates were shown to be far too exaggeratedm

About time we get a WW2 vehicle. Lets not hope this wont be the only WW2 vehicle we get(i don't count Naval) Model looks awesome as always.

It probably won't be the only ww2 vehicle, skink pls)))

TheMightyNOOT, Skink? Well. Probably only in our dreams :'(

about time? the italian tree was released ,

I was thinking the same. Like every time you unlock a new Japanese plane: first "yeeaahh" then you look at the repair cost and ask yourself: "Jesus,... how much glue do you need to sniff to come to these values?!"

apparently its 61k to repair. https://imgur.com/a/mxjjKuL

a prototype......really ? adding more for a german tree thats alredy good at all BR ? why not add things for techtrees where thers it not much like france/japan/italy ?

because it makes people who play Germany happy? That could be a good reason

Or keep going with rank VI, because some countries are lagging behind right now.

And there you are, a moaning infant.

SoloWing_Makarov, "There it is, you moaning infants.", this is literally what people have been writeing under a ton of the other devblogs. So what´s hindering me in using this in a joking manner?

If the repair cost is anything like the he177, its not going to be worth playing just FYI. Still can't believe they are so delusional they actually increased its repair cost.

von_Stauffenburg, probably will. Not worth playing at all. It's either that or premium bomber.