Akizuki is the lead ship of her class of 12 destroyers, built for the Imperial Japanese Navy from 1940 until the end of the war. Developed specifically to provide effective anti-air cover for carrier task forces, Akizuki will offer its captains the best anti-air platform available in the destroyer line of the upcoming Japanese naval forces tree, coming to War Thunder with update 1.89!

In the late 1920s, the first Japanese aircraft carrier task force was created, consisting of two carriers and two destroyers. The two destroyers proved unsuitable as carrier escorts due to lack of capabilities and range, resulting in the need for more specialized vessels becoming apparent.

Initially, cruiser-class ships were chosen to escort carriers, considered, among other benefits, to have decent anti-air capabilities. However, the proposal was dismissed soon afterwards as a number of projected issues arose. Instead, the decision was made to construct specially designed anti-aircraft destroyers, which would fill the role of carrier escorts.

By July of 1938, a design was awaiting approval by the IJN high command. However, the initial design promised unrealistic performance figures and lacked distinct destroyer features, such as torpedo launchers. As a result, the design was ordered for revision, with a new draft being proposed by September. The final draft was then subsequently approved in April 1939 and the first construction orders for the new Akizuki-class destroyers followed shortly afterwards.

Akizuki, the lead ship of the class, was laid down in the Maizuru Naval Arsenal in July 1940 and saw completion in June 1942. Immediately after her commissioning, Akizuki took part in the Battle of the Eastern Solomons in August, followed up by participating in the Guadalcanal campaign. After her first engagements, Akizuki returned to Japan for repairs in late 1942.

In January 1943, Akizuki was engaged by the American submarine USS Nautilus, receiving severe damage as a result. The subsequent repair efforts lasted until October, before the ship was deemed combat ready again. After participating in the Battle of the Philippine Sea in June 1944, Akizuki departed for what would become her last operation in October 1944. During the Battle of Cape Engaño, Akizuki suffered a catastrophic explosion, which ultimately led to her sinking. 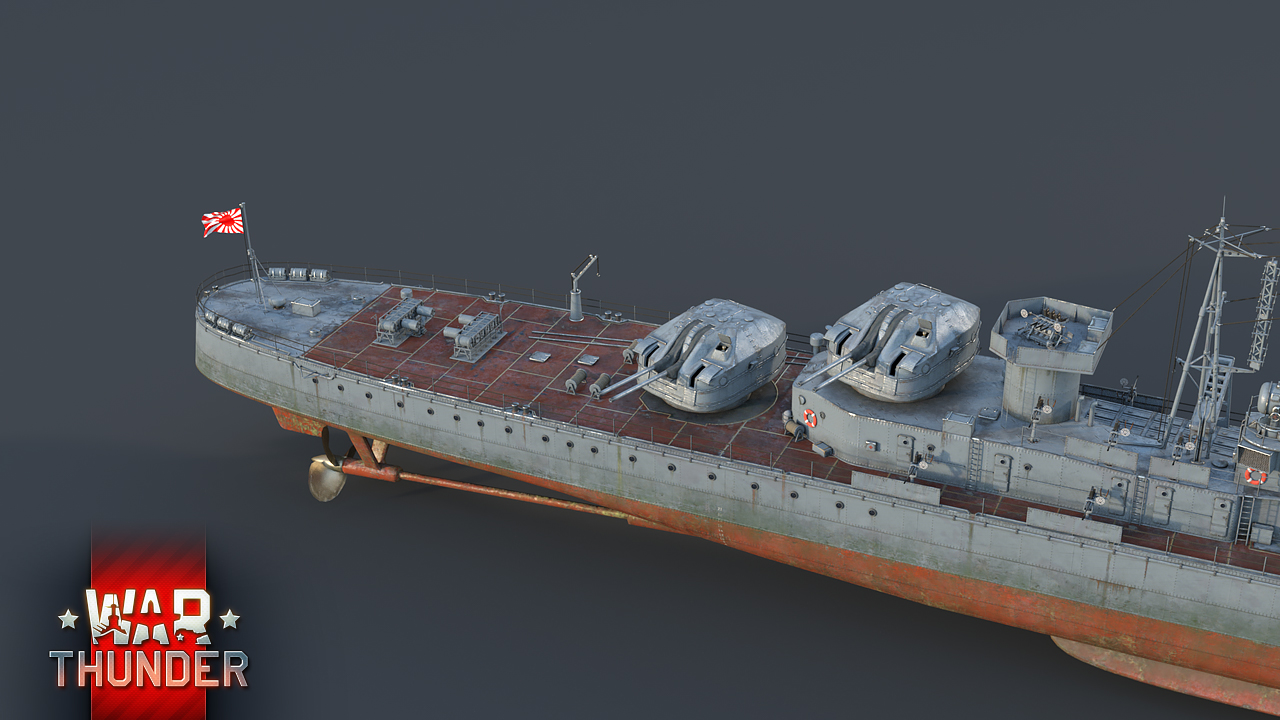 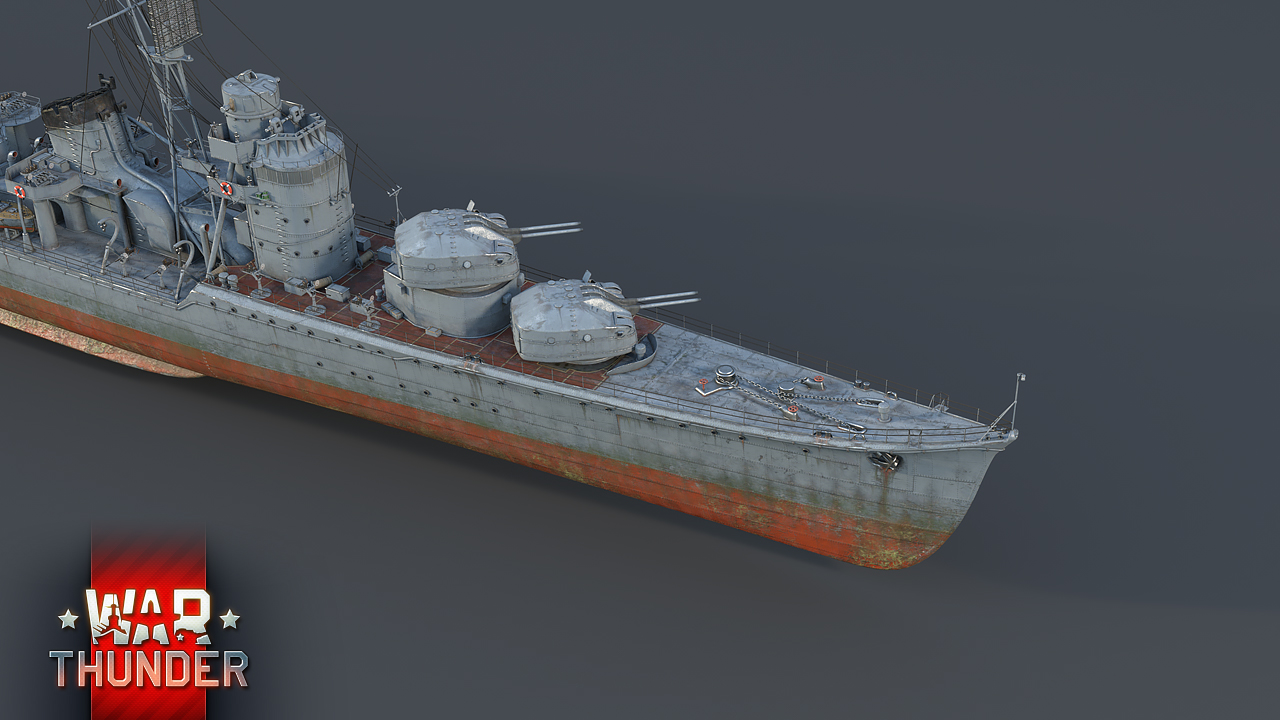 Akizuki will be the top-performing destroyer in the upcoming Japanese naval tree, available to War Thunder captains with the release of update 1.89. Despite featuring a visual appearance characteristic for Japanese destroyers of the time, the Akizuki is in fact unique in its own right and differs from contemporaries in both design as well as intended role.

Unlike most Japanese destroyers, Akizuki was designed specifically to fill the anti-air role and to provide cover for aircraft carriers. As such, shipbuilders fitted the Akizuki with what was considered to be the best Japanese anti-air gun of WWII - the 100mm Type 98 cannon. These eight cannons, spread across four dual turrets, comprise the Akizuki’s primary armament and thanks to their dual purpose nature and extremely high rate of fire, are highly effective against both surface and aerial targets.

While the primary guns would have made up the bulk of Akizuki’s firepower at the time of its commissioning in 1942, the Akizuki that we’ve decided to introduce to War Thunder features a late war refit from 1944. This version, along with the standard primary armament and the quad 610mm torpedo launcher, also features substantially bolstered quantities of anti-air weapons.

As a result, Akizuki offers its aspiring captains an impressive arsenal of smaller caliber AA weapons, consisting of 35  25mm auto-cannons, spread out between multiple turrets! With such an extensive array of auxiliary weapons alone, Akizuki captains shouldn’t have much trouble keeping the skies clear of hostile aircraft in the relative close vicinity of their warship.

While Akizuki’s firepower is top notch when compared to other Japanese destroyers, its mobility paints a much different picture. In contrast to its counterparts, Akizuki is able to achieve the lowest top speed of all Japanese destroyers, going only up to 33 knots (61 km/h). Nonetheless, this top speed, achieved with the 54,000 horsepower generated by Akizuki’s powerplant, is still very respectable when compared to destroyers of other nations.

Akizuki is arriving in War Thunder as part of the Japanese naval forces tree, coming to the game with the release of the upcoming update 1.89. In the meantime, stay tuned to the news for more information about the next major update coming soon. Until then, calm seas captains!

Plane: *exists* Akizuki: *25mm clips being loaded across the ship with faint Japanese orders being yelled*

arczer25, No worse than 20mms on the Type 1936s or 20mm Oerlikons on US DDs. 40mm Bofors guns really were a cut above the rest in terms of ship AA.

Yes! Thank you! I love it! Add more AA Destroyers and other Anti-Air focused vessels in the game please.

In the name of the Emperor I claim this post!!!!

While the enemies of the Emperor still draw breathe, there shall be no peace!

They're saving the best for last.. I hope

Kharon1, That's not what I meant. I mean that Akizuki is ultimate plane remover.

Well they tried making several, but unfortunately on the test server Akizuki kept shooting them all down. opplznerf. :)

FryingTigerWT, May I then suggest something like an Allied "equivalent" to the Fritz X, like the ASM-N-2 Bat (or its manually guided predecessors)? That should solve you guy's problem :)

O and the ship model looks nice. As they always do. That is one thing that the devs always gets right.

I see, a men of culture

BB_Lugo, I see, a men of poor grammar

Will Italy get some love this update?

Would like to see a few low tier aircraft's for them. The Reggiane line could really use some more love :)

Now this is the kind of devblog I look forward to in a morning! She looks great too, love that model! Can't wait to try her out soon, thanks Gaijin!