The Douglas A2D-1 Skyshark was created as part of a concept to replace the piston-engine AD-1 Skyraider with a more modern and powerful turboprop model.

Briefly: The Skyshark will suit fans of the attack aircraft, particularly those familiar with the Skyraider models. The same excellent vehicle but with even better dynamics and firepower.

In the early years following the war, jet engines underwent rapid development. This attracted the interest of the US Navy, which sought to arm itself with aircraft that were superior to that of potential opponents in speed, altitude, payload, and flight range.

As it turned out, jet engines were perfect for fighter aircraft but too “voracious” for strike aircraft, as they significantly reduced their range. The best engineering solution was to introduce the turboprop engine, which was a task the Douglas company undertook.

Initially, engineers simply wanted to replace the piston engine of the Skyraider attack aircraft with a turboprop engine. However, this led nowhere and the vehicle required significant modification. In the end, the engineers settled on a prototype with Allison Т-40А-2 turboprop engines and coaxial propellers.

The first flight of the XA2D-1 prototype, called the Skyshark, took place on May 26, 1950, but engine vibration nearly destroyed the aircraft and it was forced to land after only two minutes. By December 1950, the prototype had already completed over a dozen flights. However, a routine flight on December 19, 1950, ended in tragedy. Due to issues with the engine, the vehicle and pilot crashed. Nevertheless, testing continued and, despite the many technical problems that plagued the aircraft, the army ordered 10 pre-production models of the A2D-1. However, on August 5, 1954, another accident occurred when the main gearbox failed, and the aircraft crashed a short distance outside Los Angeles. This time, the pilot managed to escape the aircraft, but the project was closed and it was decided to dismantle any existing prototypes. Apparently, this decision was influenced by the fact that in the same year for the first time Douglas got another project in the air, this later became the famous A4D Skyhawk - a new generation of jets. 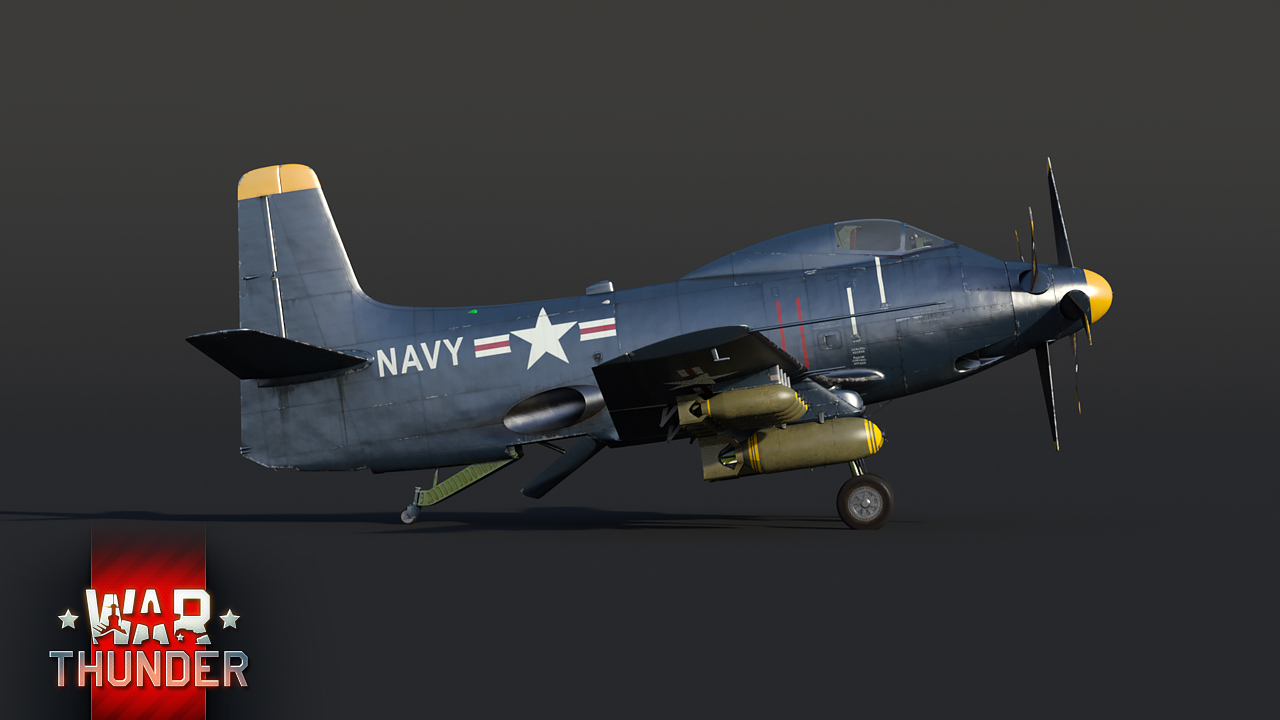 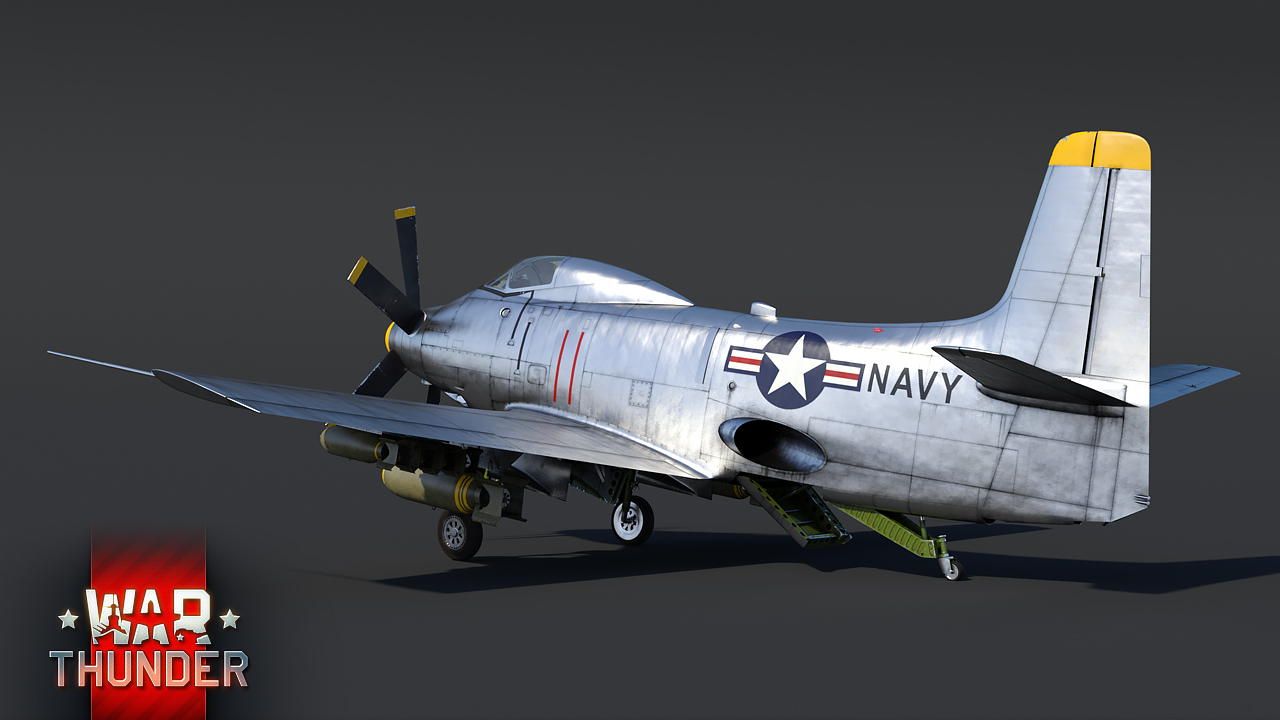 Despite the fact that the Douglas A2D-1 Skyshark never made it into mass production in reality, players will have the opportunity to experience this “Shark” in combat in the 1.89 update.

Fun fact:  There is a large fuel tank behind the cockpit with hot engine exhaust pipes running under it, so attention was paid to the insulation and fire-extinguishing equipment. In the event the tank were to take damage, the engineers provided a special drainage system that drained the fuel spilling it into the fuselage cavity to flow overboard.

Externally, the aircraft looks large and clunky. However, it’s a deceptive misconception. Twin turboprop engines provide 5,500 horsepower, allowing the vehicle to reach speeds of about 800 km/h near the ground and more than 770 km/h at medium altitudes. To harness this power and eliminate the harmful effects of torque on the aircraft, it was decided to use counter-rotating propellers. 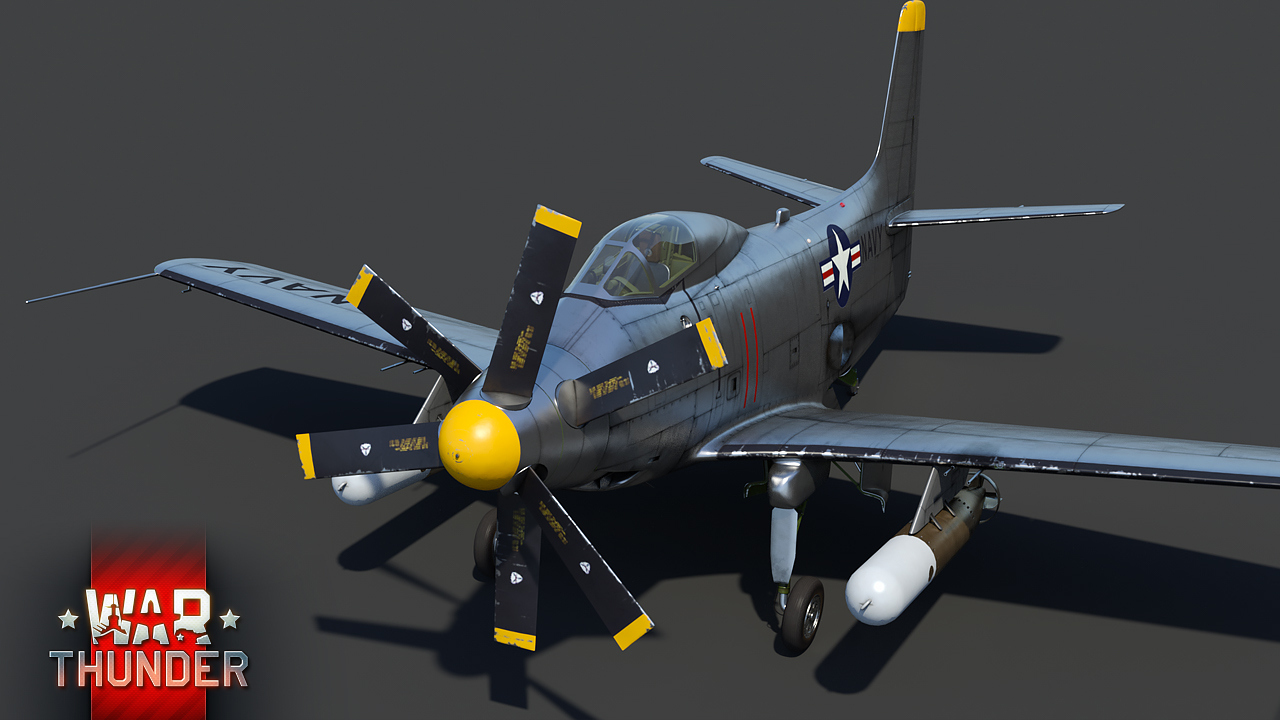 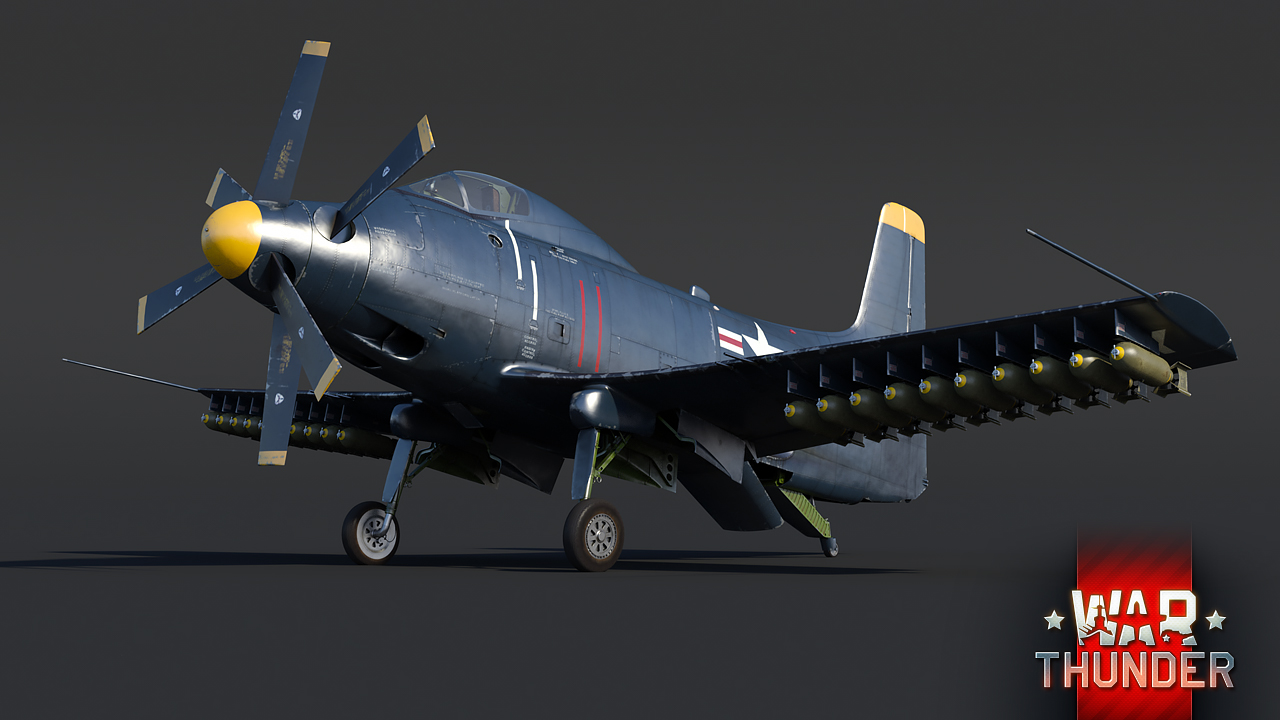 Naturally, the turboprop engine increased the combat capabilities of the aircraft. The Skyshark is equipped with four 20mm AN-M3 cannons mounted in the wing panels, each loaded with 200 rounds of ammunition. It is also capable of carrying HVAR rockets, torpedoes, and bombs weighing 500 to 2,000 pounds. Rocket fans will especially appreciate the ability to suspend 20 HVARs in one load.

The engineers also considered defence: the cockpit, fuel tank, and the lower engine are covered in armoured sheets up to 10 mm thick.  Overall, this aircraft is like an upgraded version of the Skyraider AD-4, so mastering it will be a simple and straightforward process.

The Douglas A2D-1 Skyshark will be the first American aircraft in the game with a contra-rotating propeller and a turboprop engine. It will be a rank IV premium US aircraft. After 1.89 “Imperial Navy”, the Wyvern will no longer be the only aircraft to strike fear into the hearts of ground forces hearing its sound.

Commenting is no longer available for this news
Rules
Sean0_0
24

Nice! Now I have more vehicles to play on Test Drive.

:( I help you with some Golden Wagers, dude!

Nice but your community is becoming toxic on ig. You add useful things to the game...they keep whining like little kids about adding bob semple. Is there a way you can (try trying to be rude) shut them up? 🤣 and i hope you never add the tank because its a waste of your time honestly

Blatant powercreeping is never usefull. Smart tweaking and balance are the words.

Boblem123, you just havent seen the communitiy in instagram

The T-2 needs to be 11.0, along with the 2A5. Like it was originally announced. I guess the devs prefer to lie to their playerbase with the sole intention of fucking them over because I cannot fathom any other reason for lying.

patton3333, because money, whales spend a lot of money on GE to have the best tank / plane so gaijin wants their whales to have a superiority complex so huge it fits the meta

Pro: you have to give us real money to use this plane

TeamFallFT, What is good? That Pay to win gets worse every patch?

Or do some golden wagers with experienced friends, when you win some.

Whiskoof, When was the last time you got a golden wager? If they still drop at all, the drop rate is astronomically low now, and has been ever since the rework to the Warbonds system.

Another op p2w plane, tankers in GF will love this plane for sure...

did you know you can spawn a fighter faster then a bomber/attacker aircraft in tank RB from the spawn points wise and all types of SPAA in the game and most attackers/bombers keep coming from the spawn air point so tell which way most often coming from and pre-watch the area.

I´d still like to know what you actually refer to that this thing has 20 hardpoints for bombs in the game. As far as I´m concerned the reallife counterpart only had between 11 to 13. Also the maximum load for ordnance was roughly 5500lbs, a payload of 20 x 500lbs is obviously FAR beyond any realistic values.

lmao, pay up boyo, so we can remove half the hardpoints 3 months later and kill the performance for the sake of "balanc)))"

They can do this because its premium unlike the Me-264)))

Jeebus that thing has one hell of a bombload

Ouiche, the perfect meme attacker would be the A-4F Skyhawk. Flight characteristics similar to the MiG-17, and able to carry up to 14 500 lb bombs (alternately 20x 250 lb bombs). Or 9x 19-round rocket pods, if that’s your thing.

Yeah, and it has already been bug reported. The thing was only capable of carrying 10 500 lb bombs under the wings, not the 20 it has on the dev server.

joshwagstaff13, Would been nice to have this plane fixed before live, not to deal with a broken version for 3 months.