The F.6 is devoid of the shortcomings of its predecessors, an improved fighter modification of the Hawker Hunter jet fighter, which joined the ranks of the RAF in the mid ‘50s. Fans of British aviation will not only rejoice the addition of this highly requested aircraft to War Thunder as part of update 1.89 “Imperial Navy”, but will also look forward to the unique missile armament that comes with it!

With the availability of the more powerful Rolls-Royce Avon 200 series engines in the early 1950s, the Hawker company began developing a new modification of their Hunter jet fighter, which would eventually result in the creation of the Hunter F.6 - one of the last dedicated fighter modifications of this aircraft.

The new Hunter featured, apart from a more powerful engine, a number of other tweaks and changes, most notably, a redesigned wing which contributed to the aircraft’s overall stability during transonic flight. The first prototype of the F.6 flew in January 1954, with serial production commencing in 1956. Overall, 383 aircraft of the type entered service with the RAF before being decommissioned in the early 1980s.

In the late 1970s, the Hunter F.6 was used as a testbed for a new type of air-to-air missile developed by Hawker Siddeley since the late ‘60s. The SRAAM, or Short Range Air-to-Air Missile, was a weapon system developed as an alternative to the American Sidewinder and the British Firestreak missiles.

As the name suggests, the SRAAM was designed for shorter range deployments during dogfights, in situations where pilots would find it difficult to achieve a reliable lock-on with existing missiles. As such, the SRAAM possessed extremely good agility and didn’t cost as much to produce, but was severely limited in range. Despite this however, the weapon didn’t see active use, but was instead further developed into a more advanced version which eventually did get adopted and is still in use today. 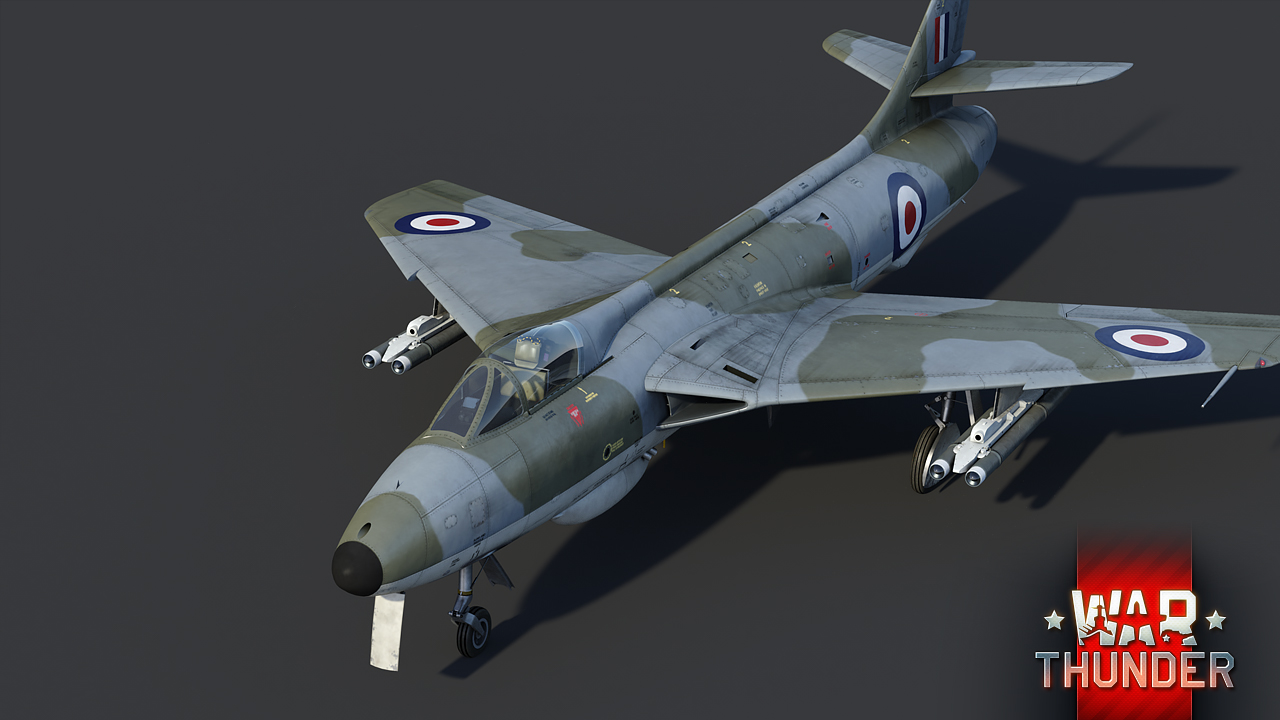 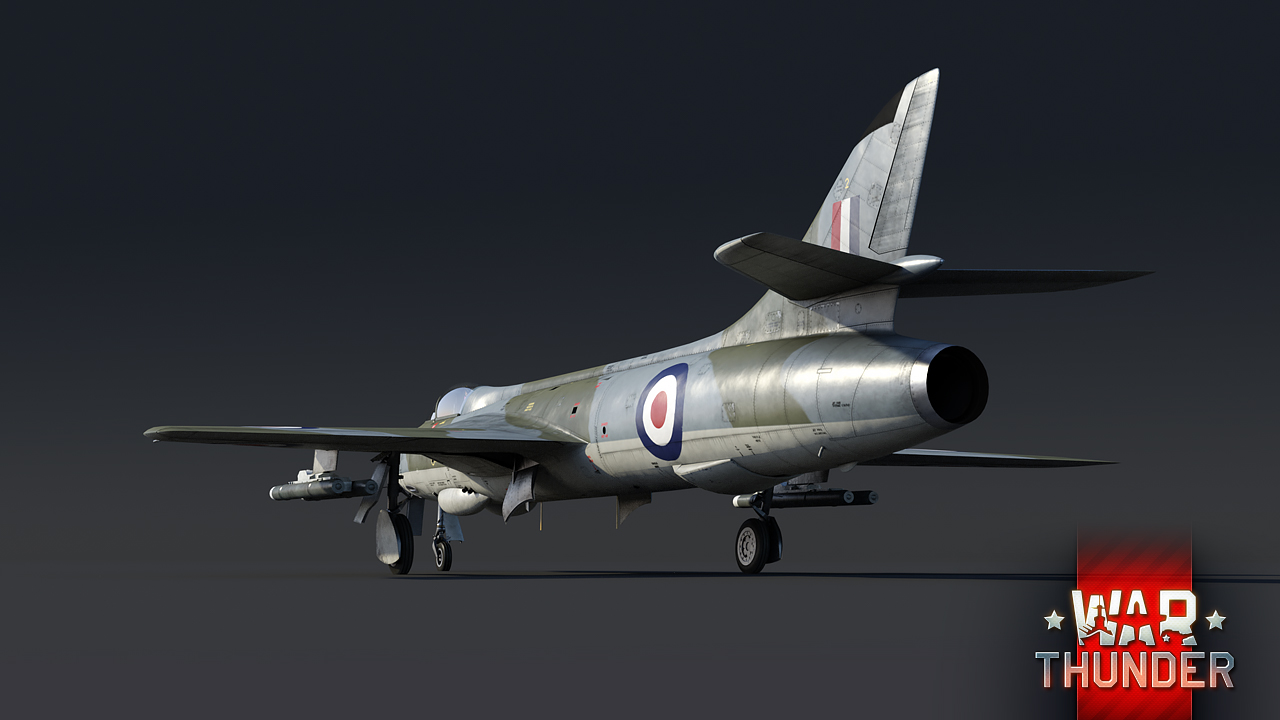 In War Thunder, the Hunter F.6 will be a new fighter aircraft coming to the top rank of the British aviation tree with the release of the upcoming update 1.89. Compared to the early version of the Hunter already available in the game, the F.6 offers improved performance and handling at higher speeds, whilst also having the ability to carry a highly agile experimental British air-to-air missile!

Before we talk about the new air-to-air missiles however, it’s worth mentioning the Hunter F.6 itself. The most notable difference found on the Hunter F.6 compared to the F.1, although one not immediately spotted by pilots, is the presence of a more powerful Rolls-Royce Avon 203 turbojet engine. Although the Avon 203 engine doesn’t come with an afterburner installed, it does produce more thrust than its predecessor, thus allowing the aircraft to reach a higher top speed of 1,149 kph (Mach 0.95) at sea level.

Fun Fact: The SRAAM missile was so agile, that on one occasion during testing, it nearly collided with the Hunter that fired it right after launch.

Furthermore, the Hunter F.6 received a revised wing design, featuring a “dogtooth” type leading edge. As a direct result of this change, aspiring pilots of the Hunter F.6 will note improved overall handling, as well as enhanced flight stability at top speeds in particular. Additionally, the 30mm ADEN cannons were outfitted with barrel compensators, thus reducing the strong recoil exerted by the guns during firing. The resulting stability increase during firing will help pilots maintain better accuracy during dogfights and will make it easier to keep the target in sight.

Having discussed the performance differences of the Hunter F.6 compared to the earlier production model, let’s move on to the SRAAMs, by the way, there are four of them on the new aircraft. As previously mentioned, the SRAAM was an experimental British air-to-air missile. Unlike the longer-reaching Sidewinder and Firestreak, missile control was achieved by deflecting the jet which allows the SRAAM to reach very high levels of agility, this in turn allows better target tracking and makes it more difficult to escape its tracking zone. However, the advantage of the new missile is also its disadvantage: once the fuel reserve is depleted, the missile loses all control. Thus, pilots in War Thunder will find this missile to be extremely handy during dogfights as players won’t be required to keep their target steady in sight, but may easily deploy the missile during maneuvers with good chances of destroying their target.

We bet you can’t wait for the release of update 1.89 “Imperial Navy” to try out the Hunter F.6 for yourself, along with its deadly new air-to-air missile complement - it will be destined to become a must-have for all those jet-jockeys out there with an aggressive playstyle. Until then, keep a close eye on your six pilots. We’ll see you in the next one!

Commenting is no longer available for this news
Rules
_PhoenixFire_
18

You're bloody right we can't wait for it! Visually stunning. Very well done to the devs for the creation of this one. One thing I would like to mention and ask is that; the F.6 could carry an impressive amount ordnance from bombs, rockets and rocket pods. However, on the dev server, and I am aware things are not final on there and are subject to change, rockets/rocket pods appeared to be missing. Are those payload options there but weren't ready or is there a reason for them not being there?

As Ouiche mentioned earlier, it should be able to carry different ordnance.

Stona_WT, Excellent. Looking forward to it :)

Any news on the change for the italian M60A1? Surely you'll agree it's unfair to change without compensation. Also, disabling comments on the OF-40Mk 2A criticizing that? Tsk tsk tsk..

Please read the OF-40 (UAE) blog. The changes to the M60 as well a special discount to M60 owners for the OF-40 are fully explained within.

Cry more. The Italian M60A1 is in an even better spot than it used to be and is better than the US' own M60A1.

YES, WHEN?? and plz make lower spawn costs in arcade heli battles (4,7k SL per spawn is away to much(mi35))

Oh yes yes yes if that would be true i would love to return. Got premium for half year and no willing to play after research everything in russian tree what i wanted.

I don't get why it's f6 variant you are adding and not an FGA.9 which is basically the same f6 but modified with tail chute and other little but handy things?

'Cause that's of course gonna be a future premium, haven't you learned yet?

tbf the FGA.9 is also heavier. We could potentially see it as a vehicle without a devblog in a folder with the F.6 kinda like how vehicles such as the F-84G-26 were added

DominantReverse, Yeah, or maybe as a tier IV modification, like how the BMP-2 can become the BMP-2D.

Nice addition, however this should not be Britain's top rank jet... fighting the T-2 spam in this thing is gonna be painful

Do you actually play the game? When was the last time you saw a T-2 in a British 9.0?

Stars_R, Well this thing was 9.7 during the dev server. So I imagine you will see T-2s fairly often.

Remember current MM is axis vs axis and allies vs allies, you should be able to enjoy fun MM with this beauty for a bit at least

LeNath, That's the problem. They refuse to fix this problem that only a stopgap measure has patchdd

Will this Hunter gets its dumb rocket payload?

Yes, the F6 will be able to equip other payloads (rockets / bombs, but i don't have specifics at the moment)

Ouiche, Great to hear can't wait to here the specific's.

Why no Javelin Sepecat?

Dude, it's not a SEPECAT, it's just modeled after it. They never actually got any due to licensing and royalties and some problems within the Army. It's a Japanese trainer.

Right_to_Ruin, it's a japanese trainer with better radar and nearly identical performance to the Jaguar so

Jaguar SEPECAT? I think it's a bit too advanced for now. We're CLOSE! but it would be OP at this current stage

sirkiwi123, What?!?!? The Jaguar literally is already in the game. The T-2 is a Jaguar SEPECAT, and gaijin, in their eternal wisdom, decided to give it to the Japanese instead of the British.

Still no true supersonic jet... Something Jag GR would excel at and would be worthy adversary for T-2

TyphoonCro, Still better than the SMB2 with it's fake FM >_>

hopefully next update effects for the afterburner are updated?

It's not updated afterburner effects we need. First we need them to remove the fire effect on all other jets without an afterburner. When fire is coming out of the engine of an Me 262, it's time to bail out.

Imagine being a Hunter pilot, and you just doing your thing you fire off a missile, only for it to nearly hit you aircraft, I bet that would even give the most experienced pilots a heart attack.

There was this one plane hit by its OWN 20mm shells during a training exercise. (pilot made it unharmed), that must have been something too.

Ouiche, That was the F-11 Tiger made by Grumman which should be introduced BEFORE the F-8 Crusader.

waiting for the aiming reticle in wot to finish but you choose to fire anyway "THAT ONE BOUNCED" someone made a death star meme with that XD only good thing from that game is the inside the chieftain's hatch videos and the European equal.