This is a premium version of the popular French tank. The export version has received several upgrades, including... a long-awaited stabilizer!

Briefly: The Super AMX-30 is an upgraded export version of the serial AMX-30B with a gun stabilizer, side skirts, and a more powerful engine.

During the second half of the 80s, a group of companies in West Germany developed an extensive program to modernize certain outdated tanks, including the French AMX-30B. A number of improvements were made to the French tank in order to enhance its firepower, increase its dynamic characteristics, and (optionally) enhance its armour to a certain extent.

The tank’s firing potential was improved thanks to the installation of a MOLF fire control system with a stabilized sight and a stabilizer for the main gun. The tank’s mobility was enhanced with a new 850-horsepower diesel engine, a German automatic transmission, and new torsion bars and hydraulic shock absorbers. The new tank was demonstrated to the public under the name “Super AMX-30” during testing in Saudi Arabia, but no buyers were found for the upgraded French tank, and only one Super AMX-30 was ever made. 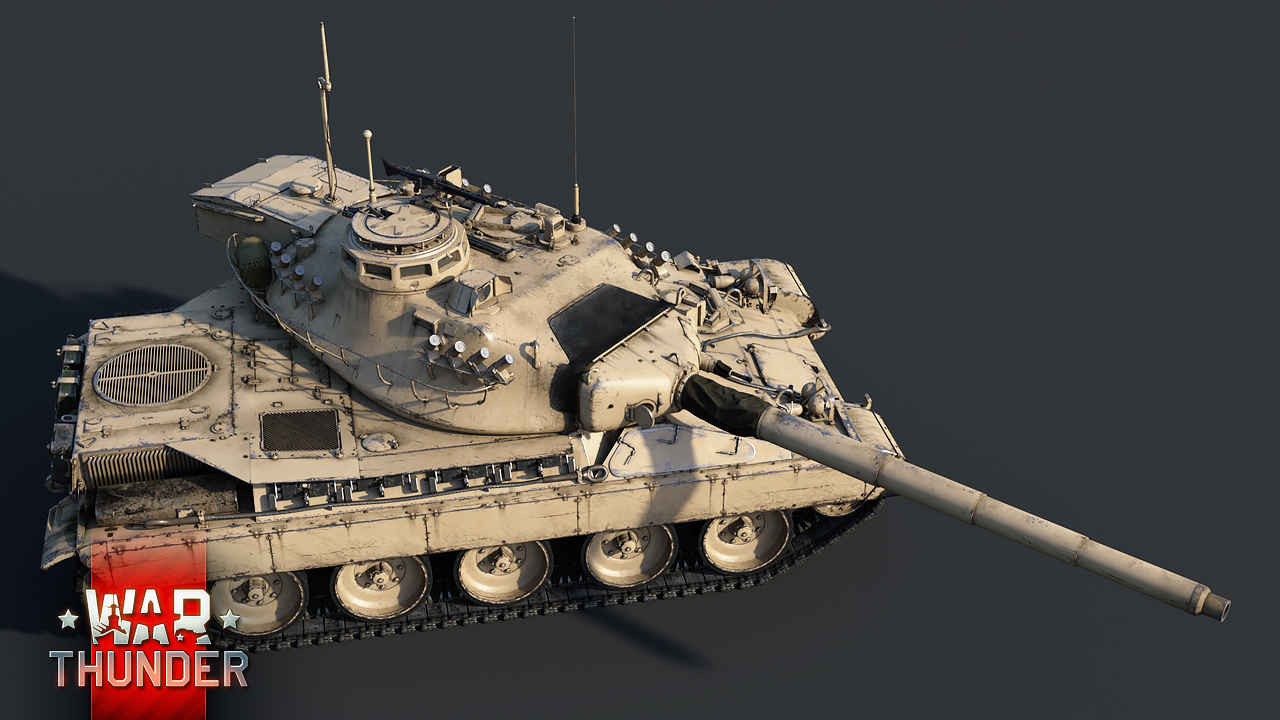 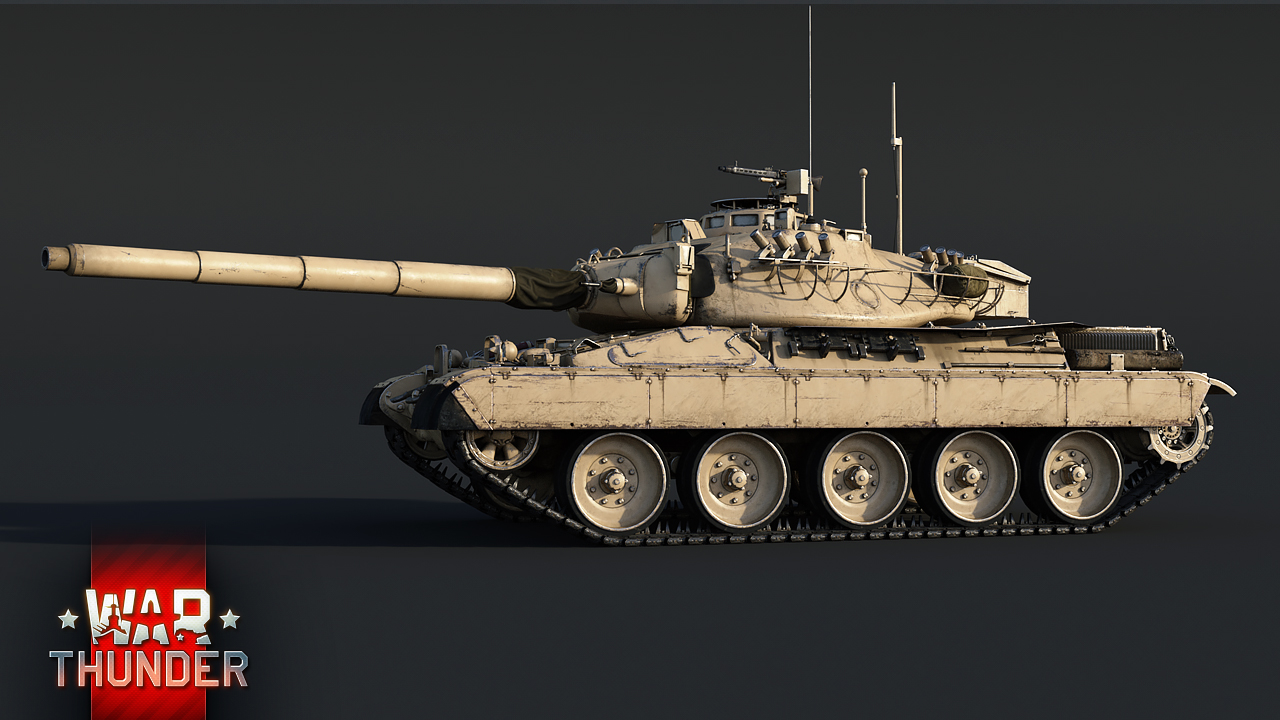 What does the Super AMX-30 have to offer fans of the French tank line in War Thunder? First of all, it’s got the long-awaited gun stabilizer. It realizes the full offensive potential of the AMX-30 by making it possible to fire at low and medium speeds. The new engine is more responsive, which generally increases the tank’s capabilities in duels and firefights from cover. One advantage for many players is the number of smoke grenades – the German engineers rejigged the entire smokescreen system, and the number of grenade launchers and grenades is now greater. The Super AMX-30 also has side skirts, which is nice too – they provide additional defence against HEAT shells.

When it comes to the tank’s disadvantages, we should mention that the vehicle’s armour is insufficient – almost all shots fired by other tanks in its class are a threat to it, which is a problem for the entire series. For tank commanders who already have experience using the AMX-30 in battle, this should be a familiar feature. The main thing is to try not to take damage at all. The Super AMX-30’s improved dynamics and excellent stabilizer help the tank roll out from behind cover, fire, and take cover again to reload, all without having to stop. Another important factor is that, as in certain other modifications of the AMX-30, the 20mm cannon has been replaced by a 12.7mm machine gun, which means that a main gun shot will probably be required to destroy light armoured vehicles.

Overall, the Super AMX-30 is now very similar to the Leopard A1A1 series in terms of gameplay, whereas the premium vehicle’s bonuses will help you research any French tank from ranks I-VII more quickly and allow you to earn more Silver Lions in battle.

Look for the Super AMX-30 in our store, stay tuned to the Developer Diary, and join us as we look forward to the big new update: War Thunder 1.89. It’s coming soon!

Commenting is no longer available for this news
Rules
Dms110
72

People have been asking for a Rank VI premium for France succeed the un-stabilized AMX-30 we already have at Rank V. This is the best candidate for premium at its rank.

Smin1080p, No it's not, you barely considered AMX 30V and AMX 30E M2 on balance and stabilized AMX 30 like this should be already on regular tree at 8.7 to push down Brenus at 8.3. You didn't even mentioned AMX 30 C2 from most *Super B2* improvements are inspired of.

Oh look ,the usual moaning comment. It's not going to be given to the 1% of playerbase ,as this community is full people buying premium tanks left and right like there is no tomorrow. I see premium tanks in all battles I play ,so there is fk ton of players that are eager to buy premium vehicles.

LAGpWND, Your stupid. He meant the new AMX50, the Leclerc and then this.

Fake tank. There is nowhere anywhere that i can find information about this vehicle. And i though GJ is getting rid of paper tanks. Are we going to see Löwe or E-50 next too? sigh...

I haven't asked the devs (they're swarmed), but i'm pretty sure they looked at this topic... or at the tank itself when they went to Saumure. https://forum.warthunder.com/index.php?/topic/417884-amx-30c2/

Ouiche, That one seems to have the 20mm autocannon still

Yep, this tank is completely fake. Glad I saved up money for the Löwe pack next update!

Hakuyuki, no löwe pls. i will buy it instantly.

I will never understand why nations are so unbalanced. Germany for example has TAM, Leo A1, MBT 70 and french tree has nothing competitive at this br. And once you decide to add something for France, its premium. It is really unfair. And same for Japan with Type 74G recently.

Dumb people keep spending money for all the crap they throw at them, blame those people.

LandKreuzer_89, Those people are the reason you are able to play this game, you're welcome, scrub.

Because on paper that's how it is IRL?

AMX-30 B2 modernisation german project. 1 built and tested, on tropical setting at Saudi Arabia (probably to sell it to them ?). Anyway i don't get it, why this one and not Venezuelian AMX-30V or Spanish AMX 30E M2, which have way more sources and documents to work with ? This Super AMX is almost a myth.

Honestly wouldn't be surprised if they added the AMX-30C2, AMX-30V, or AMX-30E as an in-tree variant. Seeing some sources that suggest the C2 had a stabilizer (although other sites are suggesting it only had a stabilized gun sight) so that might be a decent in-tree equivalent to this Premium.

This is the more unique of all of the available versions.

Would like to see 2 AMX-32. One 105mm and one 120mm. Since if they make one. Then they can copy pasta it and change the gun and the interior parts that most likely that have to be change. Would also like to see AMX 30 ACRA. AMX 30 armed with the 142 mm gun/launcher that could fire ACRA missiles. Could also fire HE shell.

My favorite premium gets a stabilizer...YASSSSSSS!!!!!

Mafjora, Because F the customer.

Another version of the least popular mbt in the game? And the second one to be premium? Really?

it's a way better version of the original, so why not?