Mutsuki was the lead ship of her class of twelve destroyers laid down for the Imperial Japanese Navy during the 1920s. Having participated in numerous operations in the Pacific theatre, Mutsuki is now set to arrive in War Thunder with the long-awaited introduction of the Japanese naval forces, coming with update 1.89 "Imperial Navy"!

As the Washington Naval Treaty entered effect, where it substantially limited the quantity of naval weaponry available to the signatory nations, Japan began developing more advanced naval designs to better parry the might of the U.S. Navy.

Mutsuki, the lead ship of her class, was laid down in May 1924 at the Sasebo Naval Arsenal shipyard and was completed in March 1926. The ship was initially commissioned under the name Destroyer No.19, only receiving the name ‘Mutsuki’ in August 1928.

Mutsuki’s combat record began with the outbreak of the Second Sino-Japanese War between China and Japan in the early 1930s. The first battle involving the destroyer during WWII was the invasion of Wake Island. Following the invasion, Mutsuki took part in many more major operations in the Pacific, such as the invasions in the Solomon Islands, New Guinea and Rabaul, while also participating in the Battle of the Coral Sea in 1942.

After undergoing repairs in July 1942, Mutsuki was reassigned to the 8th Fleet and participated in the bombardment of Henderson Field on 24 August 1942. However, Mutsuki met her fate the following day, after an American B-17 Flying Fortress bomber managed a direct hit on the ship’s mid section during the Battle of the Eastern Solomons. Mutsuki sunk on that fateful August day and was subsequently struck from Naval records in October 1942. 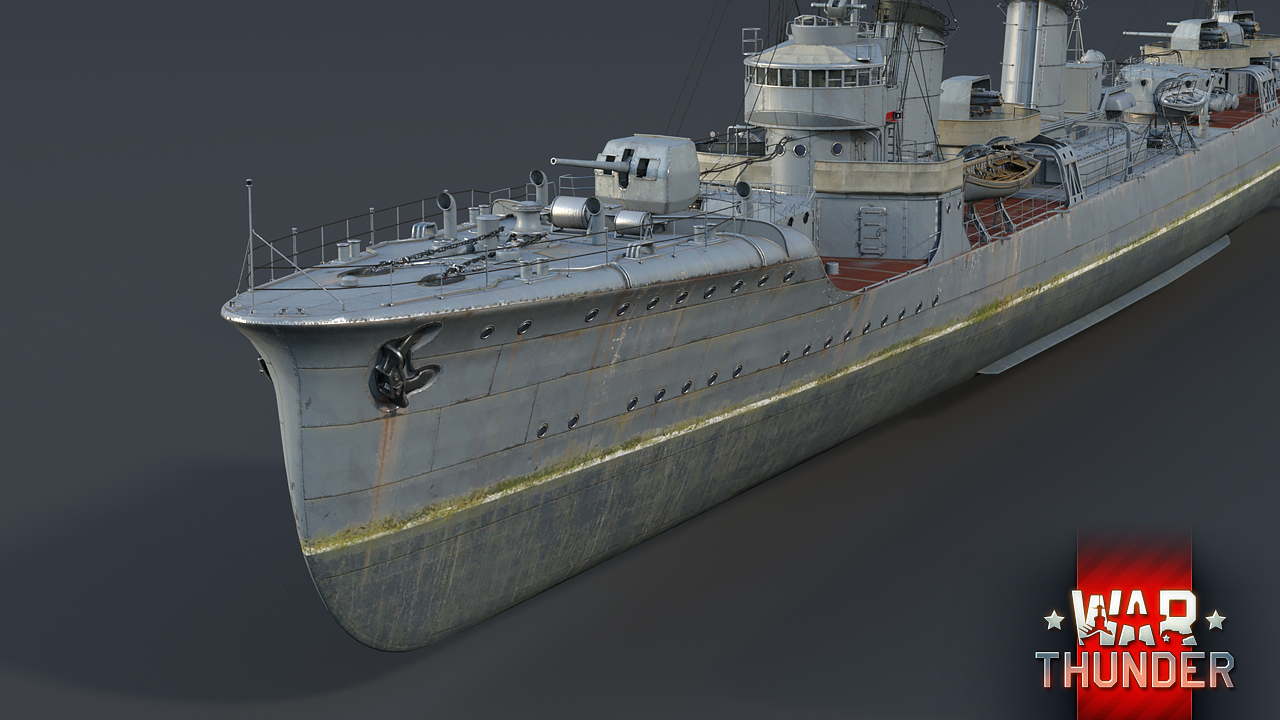 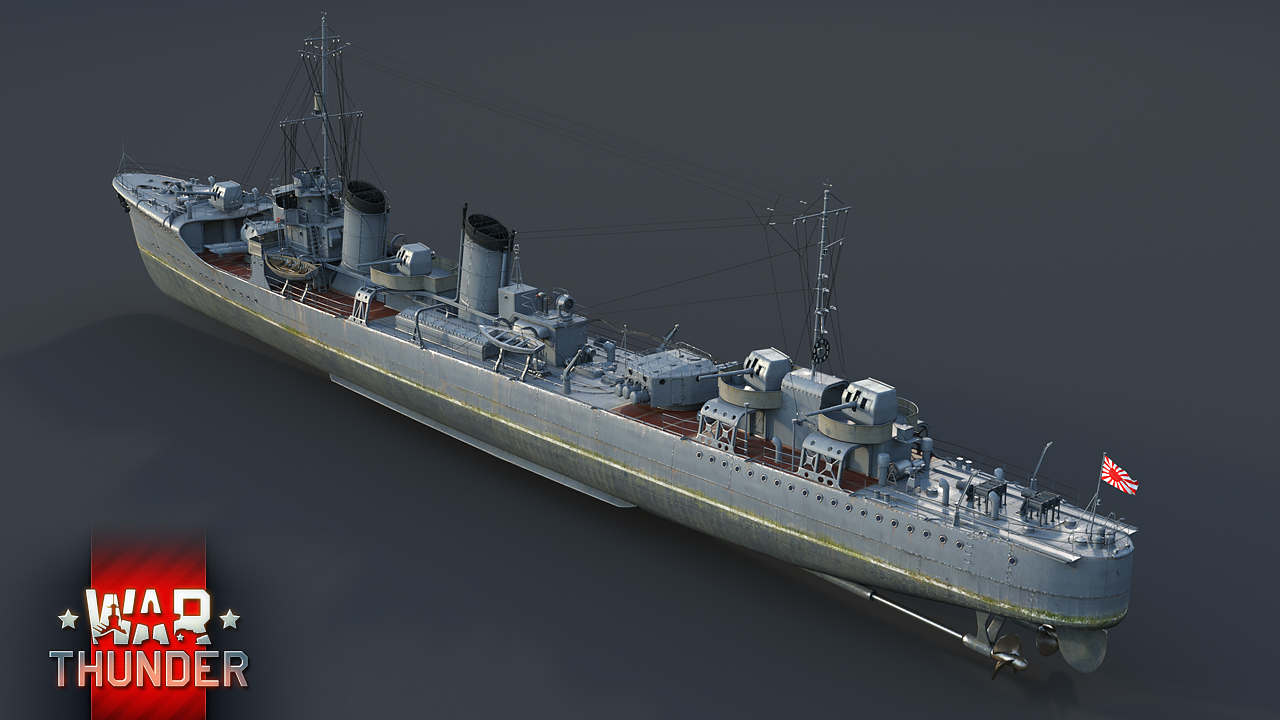 Mutsuki will arrive in War Thunder as part of the highly anticipated Japanese naval forces tree, coming to the game with the release of update 1.89. As the first destroyer vessel available to aspiring Japanese captains, Mutsuki will introduce players to the Japanese destroyer line and will act as a stepping stone from which more advanced vessels can be researched.

Mutsuki’s primary armament consists of four 120mm Type 3 cannons spread across single shielded mounts along the length of the ship. Although the mounts feature excellent firing angles, the guns, with their 6 rounds/min rate of fire, shoot relatively slowly when compared to similar vessels of other nations already present in the game. Additionally, Mutsuki only has two single rifle caliber machine guns acting as anti-air defense, leaving it highly susceptible to air attack if isolated from its allies.

Fun Fact: Mutsuki received its name after the first month of the traditional Japanese lunar calendar.

However, one of Mutsuki’s calling cards is its torpedo armament. Although only fitted with two triple 610mm launchers, one located close to the ship’s bow and the other abaft of the funnels, the particular torpedoes that the Mutsuki carries are none other than the infamous Type 93 ‘Long lance’ torpedoes! As such, the Mutsuki can effectively use its fast-traveling torpedoes against surface targets at ranges in excess of 20 km, with the 490 kg warhead guaranteeing a devastating effect on a target, if not outright destroying it.

In addition to excellent torpedoes, Mutsuki also features equally good mobility, being able to achieve a top speed of 37.2 knots (68.9 km/h). The ship is able to achieve this top speed thanks to its four steam boilers, generating 38,500 horsepower, and it’s relatively low displacement of 1,336 tons. With its good mobility, Mutsuki is able to quickly maneuver into position to launch its devastating torpedo armament and can also beat a hasty retreat if the battle gets too heated.

Mutsuki arrives in War Thunder as the first destroyer of the much anticipated Japanese naval forces tree, coming to the game as part of update 1.89 "Imperial Navy". Until then, be sure to stay tuned to the news for more information regarding the next major update coming to the game! Happy hunting and calm seas, captains!

Commenting is no longer available for this news
Rules
WT_CT_Center
5

any chance for a dev server later?

Not today, but there is always a chance that it will be opened again before Major hit the live server. We need to work on things you reported after 1st opening.

Stona_WT, Can you atleast give us an ETA of the next one? If i'm correct it should be this saturday or next week friday/saturday.

Not really. The destroyers of other nations counter with a firerate that is more than twice as fast. If the 120mm hit, they hurt, sure. But you'll really have to make those salvos count, else you're quickly outdamaged.

Genewen, Or learn to maneuver and change speed.

Are we going to see more Jets that we didn't see in the Devserver for this update?

On the 1st dev server, Ayanami had Type 93 torpedoes as well, despite being in what appears to be as built configuration. Honestly I'm almost surprised that Kako got Type 8 torpedoes to match her pre-rebuild configuration.

Really excited to see the IJN vessels next update

Give us Kaze gAiJiN.

Which ship are you talking about? Could you clarify as there multiple IJN ships with Kaze in the their name and I haven't found any by the name Kaze alone.

WiseYeHunter, I would assume he is referring to Shimakaze

they want Kamikaze aspect for planes crippled so players can at least do a lil damage as they were a real thing in the latter part of the war! which actually used too exist in game too an extent now is restricted too external hardpoints detonating in the crash