The Stormer HVM was the pinnacle of armoured vehicle and AA armament development by the UK. A close range anti-aircraft missile system on a mobile platform is an ideal combination to cover the ground troops.

Briefly: The Stormer HVM is one of the most modern and unusual anti-aircraft missile systems in the game. 16 guided missiles, each one capable of dividing into three guided tungsten rounds containing explosives.

In the mid 1980’s it became clear that supersonic aircraft and strike helicopters proved to be dangerous against ground troops. To counter these threats back in 1986, the British Ministry of Defence began development of the “Starstreak HVM” (High Velocity Missile) anti-aircraft missile system. The production was done by the Shorts Missile Systems company. On the 1st of September in 1997, the famous Starstreak anti-aircraft missile system had been put into service by the British Army. Initially it was developed in 3 different variants: portable, stationary and mobile, although later they additionally developed an air version but it didn’t find a practical application.

The armoured personnel carrier Stormer was created by using the propulsion system, the transmission and chassis of the light scouting FV101 Scorpion tank for the mobile version of the system. In 1975 on the base of this armoured personnel carrier, the self-propelled anti-tank missile system FV102 Striker was created. Since the vehicle proved itself well, it was decided to additionally create the self-propelled anti-aircraft system Alvis Stormer HVM on its platform. 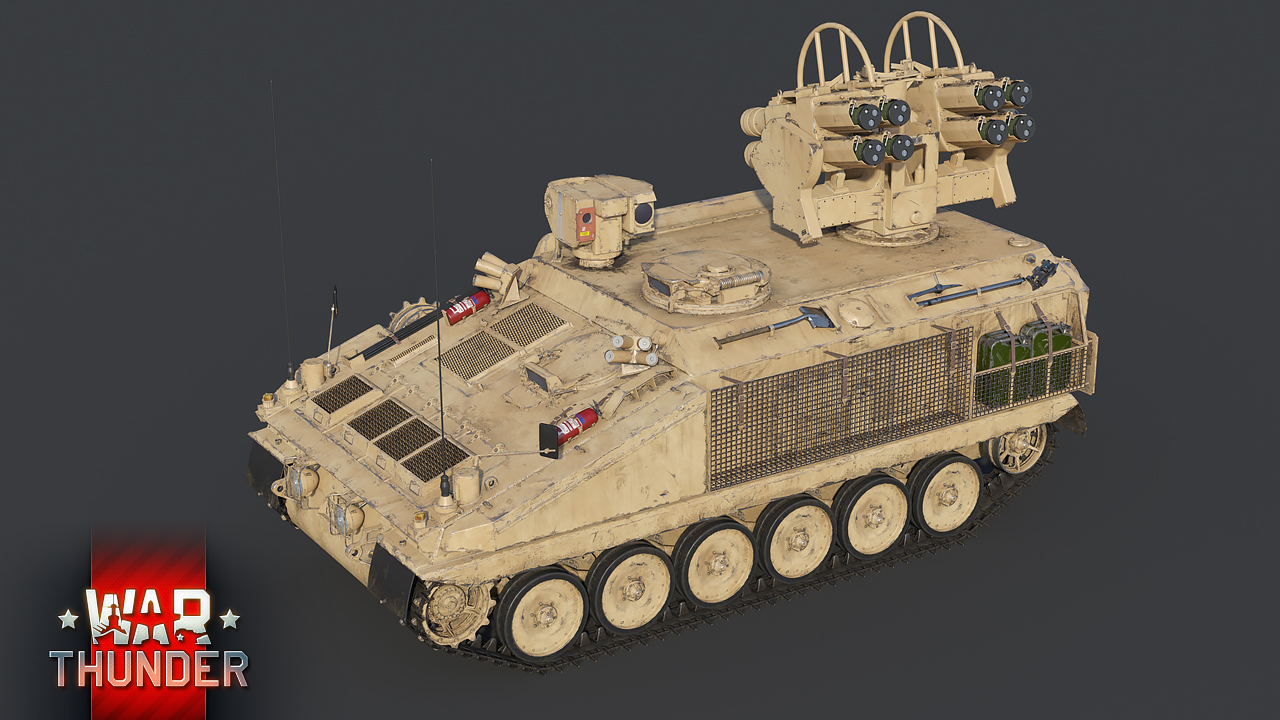 In War Thunder the Alvis Stormer HVM anti-aircraft missile system will be the first anti-aircraft system for Great Britain. Not only the first, but also the most modern and unique in the game. The behavior of the vehicle is equal to the already existing FV102 Striker - same good dynamics, same light armour. But this time your target will be helicopters and jets. Especially as the Stormer has a launcher boasting 8 guided missiles which will use a laser targeting system. The warhead of these missiles being three dart kinetic impactors, each of them carry a small amount of explosive mass which ensure guaranteed target destruction after penetration.

Fun fact: Currently, the Alvis Stormer HVM system is still in service with the British Army and its production continues. The number of the already produced anti-aircraft missile systems is over 151 units.

After detaching from the missile, they line up in a triangular battle formation, begin to rotate around the central aiming line and continue to move towards the target with sufficient maneuverability. Target destruction happens by the detonating of the small fragmentation part of the “dart” inside the target after penetration of the hull and protection elements that ensure the maximum impact. This is a complex missile, and the vehicle has 16 of them - 8 already in the launchers and 8 in the vehicle hull.

But it is better not to face other ground vehicles - this anti-aircraft system has a very high silhouette which would be very hard to miss. If it is really close, the Stormer missile would be able to penetrate any frontal armour on light vehicles or BMP’s and  also the side armour of a MBT (main battle tank), but we would still advise you to use the high mobility of the vehicle and keep your eyes on the skies.

Are you tired of annoying pilots that like to target tankers? The Stormer HVM will be the worthy and long-awaited answer to any air threat! Try the new technology of these missiles soon in War Thunder update 1.89 "Imperial Navy"!

Commenting is no longer available for this news
Rules
Warpzeh
40

Look at all those fire extinguishers! Too bad you can't use em until you unlock it :)))

xaxaxaxa keep suffering until you give up and buy it with ge :)

don't you know that when you buy a tank for several million pounds the fire extinguisher and smoke grenades are an option one just don't get before several battles and the thing comes with worn parts that need maintenance to reach full efficiency!!

darkpotatomaster, When I buy a new car i tell them "No I don't need the doors, air con, radio or seats, let me drive round town for a year before you fit them"

I just want to say that I'm very impressed you went through the effort to model this unusual missile. I didn't expect such a specialised vehicle to get into the game. The penetrators do need a bit more pen though, but that's for a bug report

This was not an easy task, it's a really unique design! On an unrelated note, if the British Army happen to be missing a Stormer HVM and a bunch of Starstreak, that's 0% our fault.

Ouiche, Anything about the Type 79 fuse fragmentation warhead. Maybe as a modification for the Type 89? Lovely looking model by the way. keep it up!

*Are you tired of annoying pilots that like to target tankers?*. Yes, thanks for this kind of regards to your air fan base ,who would like to enjoy playing combined arms too. Any Jets/helicopters survivibality counterparts, anyone ? Or you just forget to think about it ? I understand current Helicopters gameplay was broken against tanks. Is it worth to complety brake both jets and helis gameplay by adding AA missiles powercreep then ?... instead of carefully tweak it...

^This, currently, a good tanker can hope to get over 10 kills in a single spawn. A good plane or heli pilot can hope to....maybe dodge a single, maybe two SAMs? Then you wasted too much energy evading them and die to the next one.

nixsus, It's called tank RB for a reason. Not destroy defenseless targets with aircraft. If you want to play planes go play planes and stop whining. Nobody wants to get bombed again and again and again i have seen fj4 pilots get upwards of 15 kills in a single tank match which shouldn't be allowed. Let my tankers tank and fly your birds in peace.

Uh. This is nice and all but a serious concern and question. Playing mainly the US or UK you almost always face Germany with USSR....Can you look at the nation Match Making and start to allow more historical accurate teams like UK and Germany Vs. USSR? I understand not US with Germany but USSR should not be teamed up with Germany or US anymore now at top tier.. Please can you look into this?

Agreed, nation compatibility should really be revised, at least for cold war vehicles and later.

Turenkarn, there is simulator mode, where you can play with every other nation against the USSR

Ever heard about the ''Cold War''? You know the war with East Germany and the USSR. Apart from that they should also fix the maps and the overall map design for MBTs. So in some way the USSR and Germans are historical. And indeed what Alx941126 says if you want Germany, US, UK etc vs the USSR there is a mode called simulator.

War_Gaming_NL, How is it historical? Amount of DDR machines we have in game can be counted on one crippled hand and not a single one of them is ground vehicle. All german cold war tanks are western, all except one heli is western and there are only two DDR planes. Atleast we should get free MM without forced coalitions like UK+US and GER+ITA.

Now that I see the missiles I'm affraid... :c

This will be fun to blow helis out of the sky, thx guys! ^^

What helis? Nobody will fly when 1.89 go live