News
back to news
Development
9 September 2019

The Scorpion was designed to fight Soviet bombers back before the Cold War was even a thing. It carries a massive number of rockets for its time and was the world’s first aircraft to carry air-to-air nuclear rockets. Get ready for two different versions of the F-89 Scorpion jet!

Almost immediately after WWII, the Nothrop Corporation began developing an experimental jet fighter-interceptor to meet the new requirements for that class of aircraft. The American interceptor’s primary targets were supposed to be Soviet bombers, so the projected model’s flight characteristics and armament had to meet this objective. At first the two-seater twin-engine jet was developed to have a rather interesting four gun turret. This turret was to be mounted on the aircraft’s nose and could fire on targets either automatically or manually along a vertical plane either forward, up, down or, in some cases, backward. However, when the experimental model of the aircraft was ready, the turret still hadn’t undergone testing yet, so the military decided to install traditional static frontal guns on it, as well as HVARs on the wing pylons. It was with this loadout that the Scorpion F-89A and F-89B went into service. The armament was switched exclusively to rockets somewhat later. To make the change to rockets, the designers implemented an interesting solution: Mighty Mouse unguided rockets were installed on the front of the wing-mounted fuel tanks in such a way that the rocket and fuel sections of this part of the design were separated by a fireproof barrier. This also made it possible to install heavier, more destructive HVARs under the wing. The F-89D or “rocket” version of the Scorpion went on to become the most widespread version of the aircraft in the US air force – 682 of them were manufactured. 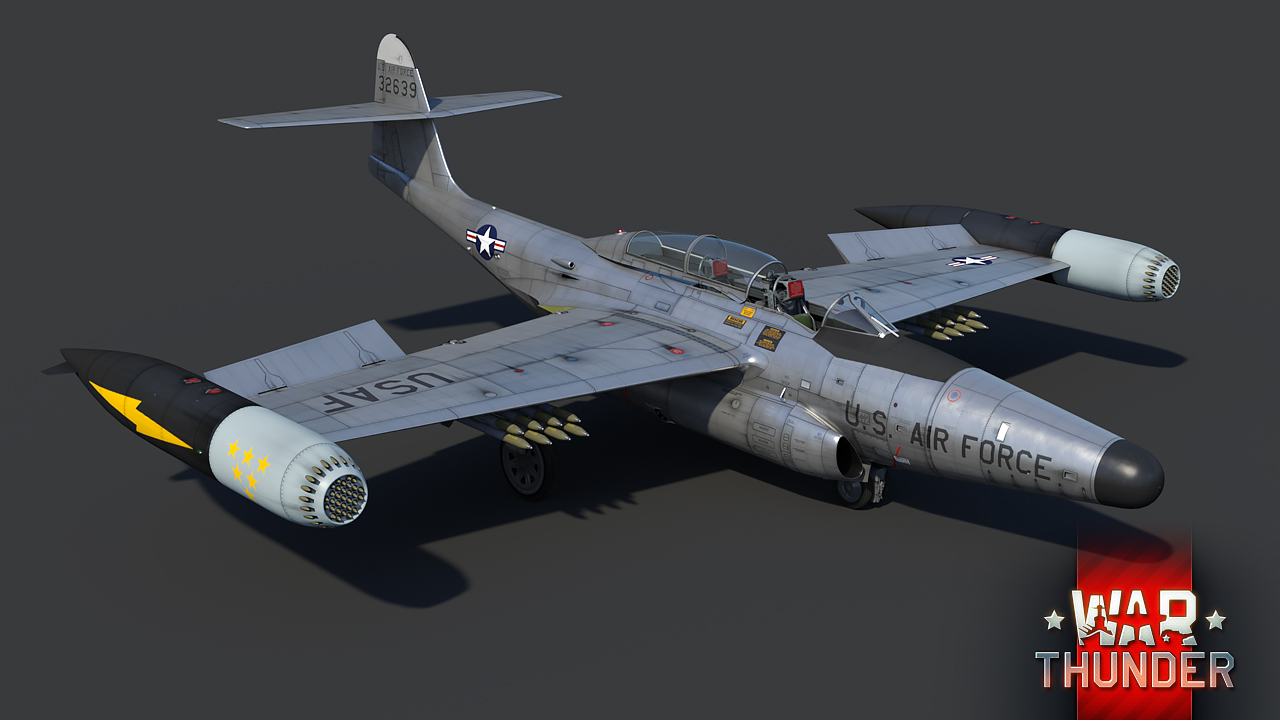 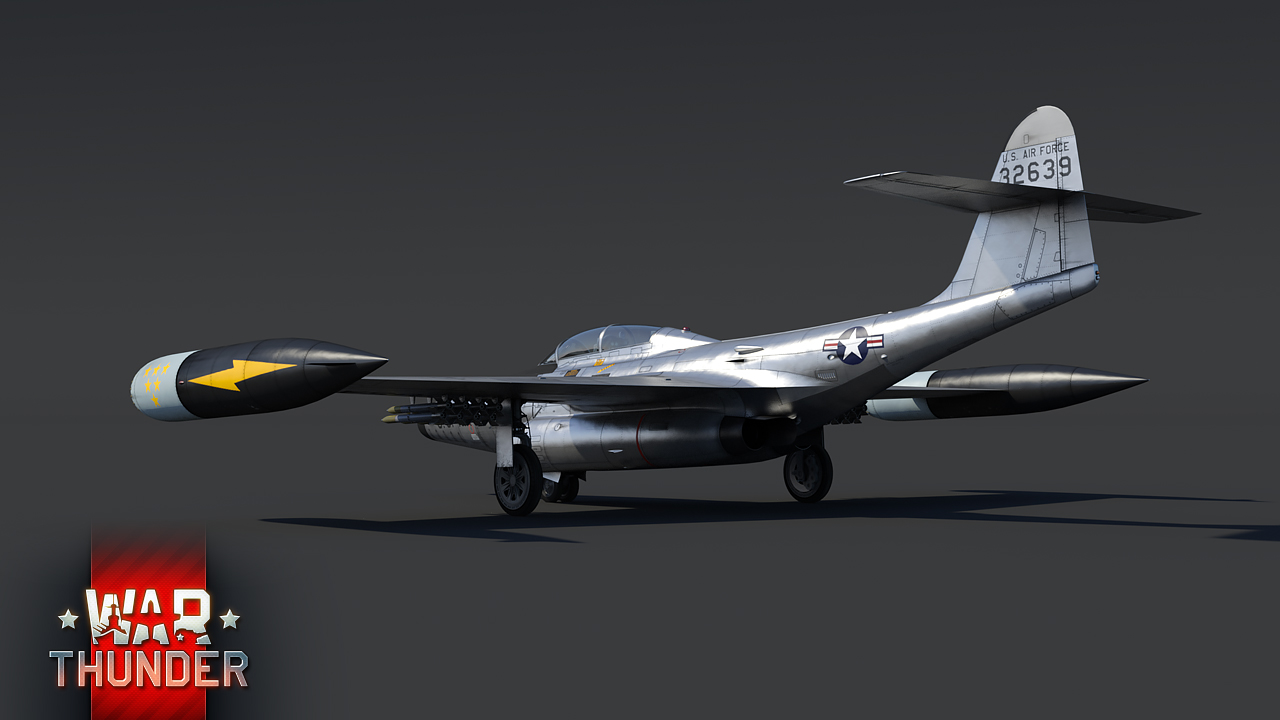 Fun fact: The F-89 is famous for having the first American AIM-4A short-range guided missiles (GAR-1), and even MB-1 Genie air-to-air rockets with nuclear warheads!

In War Thunder 1.91 Night Vision we offer two versions of the Scorpion – the F-89B and F-89D – which will become rank V premium aircraft in the US Airforce line. Like the Australian Boomerangs, they are acquired in order. Each modification is interesting in its own way, but they’re especially good together. The F-89B is a typical early post-war jet interceptor. Its not-worst-at-its-rank speed and rate of climb allow it to catch up to any piston-engine aircraft and fight early jets on an even footing. The F-89B is splendidly equipped for hunting other aircraft – its six 20mm M24A1s with a high rate of fire and 1,200 rounds are conveniently located in the front section of the fighter and allow the pilot to fire long, accurate volleys with barely any jams. Traditionally there are several kinds of ammo to choose from, including armour-piercing rounds, which allow you to deal with AA guns and armoured cars.

As for the F-89D, it’s exclusively an assault aircraft designed to deliver concentrated strikes against ground targets. The two unguided rocket launchers installed on the front part of the fuel tanks at the ends of the wings hold 104 Mighty Mouse rockets, each of which contains the equivalent of over a kilogram of TNT. In addition, another 16 HVARs, which fare quite well even against the sturdiest tanks, can be attached to the pylons. This modification has no guns, but why would you need guns when you have SO many rockets?

Both Scorpions will come in handy for various types of battles and situations. Taken together, they completely fill the fighter/attack aircraft niche for air and mixed battles alike. Both modifications gain altitude pretty well and can reach a maximum speed of about 900 km/h. The aircraft come equipped with radar that lets you fix targets along your flight path at a range of about two kilometres. The Scorpion has two engines, each of which has its own oil system, which gives you a chance to escape from combat and reach your airfield with a single engine. The Scorpion’s noteworthy disadvantages include rather fast fluttering at any speed above 900 km/h and insufficient speed to overcome especially fast hostiles when flying horizontally. Watch your altitude and speed, and slice your enemies up with high-speed guns or pelt them with endless rockets – the Scorpion is an excellent and rewarding aircraft for a nice “fan” game!

Commenting is no longer available for this news
Rules
Comrade_Katya
77

I have to say Gaijin, i'm incredibly disappointed. I thought that it was simply taking you a while to get round to reading my bug report on the F-89D having the wrong rockets, but now I see you actually just ignored it. The F-89D is an interceptor, not a ground attack aircraft. It should have proximity fused high-explosive rockets, not HEAT rockets! Not everyone plays mixed battles! Please, for the sake of historical accuracy and usability, please give it the correct air to air rockets.

Hello. Your report has not been ignored at all. We do not just ignore bug reports of any kind. It was only submitted to the developers on Friday so would have only been processed fully after this blog was created. It will be reviewed in due course.

"Historical accuracy" I don't think this is their focus on the game anymore especially since the recent removal of the ROC flag...

As far as i know, the F-89D was never meant to be used as a ground attacker, it's missiles supposedly have proximity fuzes, which would indicate a role of interception, not CAS.

I made a bug report about it on Friday, with a schematic of the proximity fuse. I thought it was taking them a while to read it, I guess they decided to just ignore it.

You can set the fuse ingame. So maybe that is what you are supposed to do in combination with the radar as that shows the range.

Snipermakedonski, A good idea, but not historically accurate.

Gaijin, the F-89D is an interceptor, *not* a ground attacker. Please give it its historical unguided A2A rockets, and not the ahistorical HVARs it has at the moment.

Omega7b, It couldn't after the initial trials. D version onwards hadn't even a gunsight installed, so any ground attack mission was out of question.

F-89D? Ground pounder? This is really one hell of a shameful moneygrab.

It's a dedicated interceptor, armed with proximity fused HE rockets for air to air use. Gaijin: "Ground attacker with HEAT rockets!)))"

Comrade_Katya, Same rockets, different warheads. Looks like the FFAR had something like 11 different options for warheads, with 6 different fuses it could use. Gaijin just decided to load them up with the M247 HEAT warhead instead of one of the three HE warheads. Still, here's hoping they give us the option of switching between warheads.

Better fun fact: An F-89D, even after expending all of its rockets, failed to shoot down an unmanned F6F-K drone which only stopped after it ran out of fuel and crashed into the ground.

It was two F-89Ds and they were called by the Navy to intercept a runaway drone, and the F-89 was designed to intercept large soviet bombers, not small fighter sized targets which in this case was in a slight constant turn, also F-89Ds as per the report had their gunsights removed as intercepts on bombers were done automatically by the fire control system. So they had to make a manual attack on a target they weren't designed to attack. they did score one hit but the rocket failed to detonate.

Capt_Fine_Falke, Ah yes, you are correct, it was two. And yes to the other stuff as well. Was stating it simply, I suppose.

Boomerang jets! Two premiums tree'd after each other in top tier. This update is so incredibly bad to the community, holy crap

Where is the love for Germany?

This blog mentions the aim-4 but on the dev server neither had it. Is it planned to implement this weapon in the future? Also please unlink the two premiums, a lot of people would happily buy the f-89d as a meme jet but would have no use for the f-89b, so you'd probably get better sales if people could buy only the d.

Reading up on it, it doesn't sound like either the F-89B or the F-89D were fitted with the AIM-4. The first variant to carry them was the F-89H (which carried three on each wingtip pod), and it was also carried by the F-89J (which was based on the D, with the AIM-4s carried under the wing). All that said, dataminers did see the F-89J in the files, so it's possible we will see that eventually, hopefully as an in-tree vehicle.

_Argonaught_, f89s, not one specific variant that barely made it away from trials. if there were so many, then why, like the b-26 haven't we gotten a tech tree variant yet :(

You guys are never happy...

nah cmon really wheres the F-105 F-104 F-101 A-4 and A-6 A-7 and surely we can have a B-52 now and the Russian Bear electric lightning like if u gunna take this Janky Modern path do it right! also wheres the Mirages and if China can have a Tree Surely Israel can Haz one too :P (is about as legit as Chinas same level of Copy Paste)

GoonyGooGoo, More strategic and jet bombers? Do you want more planes to plague the effectiveness of teams? They are either very useless or overpowered

-Strategic bombers have no place in this game - and how you gonna make israeli tree since the nation only existed AFTER the 2nd world war. Unless you make them start with BF109 which is a pretty dumb idea

*grahaldmills, bombers need their own game mode like attackers to be effective cus they work in mixed battles

let them fix the other aspects of the game first like br compression, updated models, and a plethora of new maps.