During the mid 1990s, the Italian military started a modernization program for the SIDAM 25 SPAA, which allowed the vehicle to carry surface-to-air missiles. Coming soon as part of the upcoming update 1.91, the new SIDAM 25 Mistral will become the first SAM-equipped SPAA available to Italian tankers in War Thunder!

Briefly: A modernized version of the familiar SIDAM 25 SPAA, modified to carry up to six Mistral surface-to-air missiles.

Modernization plans for the SIDAM 25 were drawn up in late 1994, when Italian engineers proposed the up-arming of the vehicle with Mistral surface-to-air missiles in order to give it better long-range capabilities and improve its performance as a whole.

The missiles were to be distributed between two launchers, with each launcher containing three missiles. As such, the vehicle could then utilize the missiles against targets at long range, whilst preserving the cannon armament for close-range engagements.

The modernization of the SIDAM 25s with Mistral SAMs was expected to begin in the early 2000s, alongside some other potential upgrades as well. 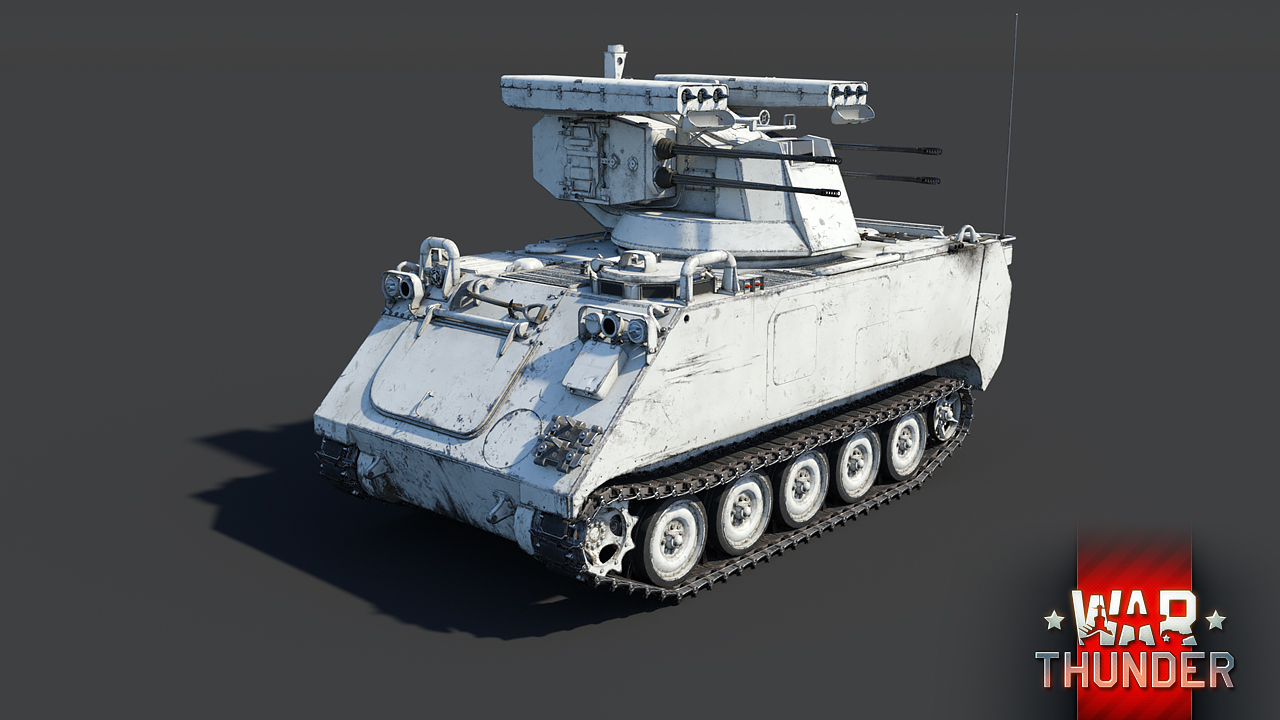 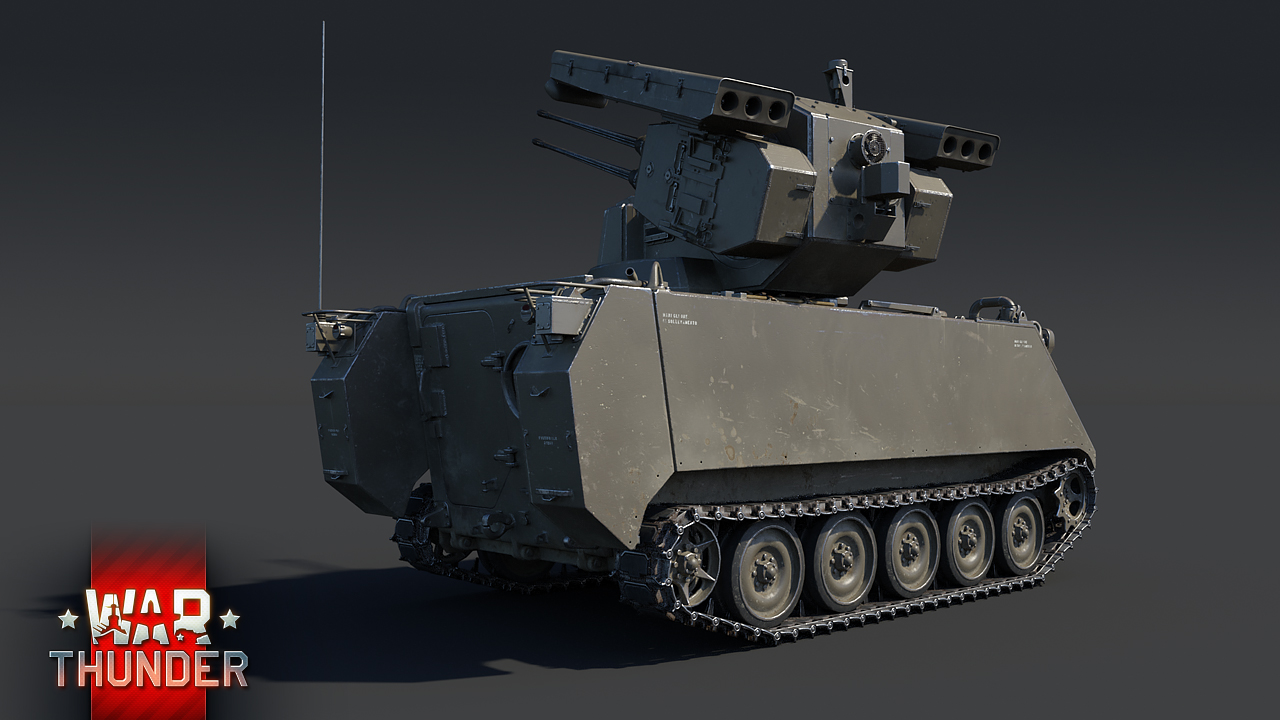 The SIDAM 25 Mistral will come to War Thunder as part of the upcoming update 1.91 and will be the first SPAA vehicle fitted with SAMs available to Italian tankers in the game. Much like the 2S6 Tunguska, already familiar to players, the SIDAM 25 will offer tankers a mobile anti-air platform which combines both conventional gun armament with an effective missile system.

In terms of general characteristics, tankers pretty much still look at the standard SIDAM 25 SPAA with which some have already made their acquaintances with. The biggest twist however, comes in the shape of its standout feature - the six Mistral surface-to-air missiles.

These missiles, perhaps familiar to some French helicopter pilots out there, are unlike Tunguska’s manually guided missiles, heat-seeking infra-red (IR) missiles. This means that aspiring commanders of this machine won’t have to keep the target in sight in order to destroy it, but will simply need to achieve a successful lock-on in order to fire the missile and potentially destroy the designated target. Thanks to the Mistral SAMs, the effective range of the SIDAM 25 is potentially increased up to 5.5 km - the maximum lock-on range of the Mistral missiles.

Although the addition of Mistral SAMs to the SIDAM 25 might make it seem like the vehicle’s capabilities have been substantially enhanced, it’s worth keeping several distinct drawbacks in mind. For starters, the SIDAM 25 is not fitted with a search radar, meaning that commanders of this machine will need to make out and select targets manually. Furthermore, due to the Mistral SAMs being IR missiles, their effectiveness relies entirely on their own tracking ability, meaning that they may be fooled with the use of countermeasures, while players will have no further control over the missile’s behaviour once it leaves the launcher. Lastly, the SIDAM 25 Mistral will have the least number of guided missiles available at its disposal during a battle when compared to other top tier SPAAs currently in the game, meaning there’s less room for errors.

All in all, the new SIDAM 25 Mistral will offer fans of Italian ground vehicles an improved version of an already familiar SPAA platform that comes with its own unique set of advantages and disadvantages, which tankers will have to successfully master in order to get the most out of this vehicle.

This vehicle will be assigned to the top rank of the Italian ground forces tree.

Commenting is no longer available for this news
Rules
reazn
46

This is the SAM you should have added for all nations. The ADATS and the other "Player controlled anti everything missiles" were the biggest mistake you made in top tier. With SAM like this Sidam all the countermeasurments will make sense now and being actually not useless like it is right now.

I agree with what you said here reazn, I agree that the missiles from all SAM launchers should be heat seeking, instead of point and click, I wouldn't mind the point and click SAMs if there was a counter measure to evade them (that isn't trying to out maneuver them), like CHAFF, which is currently lacking in the game. In general Tanks is far ahead than ships and planes. (M1A1 was made in 1985, where as the F-100D was made in 1954, just as a reference point to tell you what I'm talking about)

Snivy_Films, @Snivy_Films - Only problem with that is for a large amount of people (Not most, but still a large amount) Chaff wont do anything, since those people (Myself included) don't use the radar when launching and tracking with missiles. The Radar is to spotty, mainly for helicopters, but planes as well sometimes. Instead of trying to fight the on/off radar while guiding SAMs, it's easier to just not use the radar. Making Chaff useless against people like me. (Not to say it shouldn't be added.)

i agree, remove the missile warning and its fair for both, the heli pilot since they have counter measures and also for the aa driver since the pilot wont spam flares as soon as he gets a warning. this thing is even more balanced than the otomatic which is the first introduction that ruined top tier with the "aa is rock, paper and scissors"

This is NOT a blueprint! It existed and tested. P.S. Stop cry about german paper tanks please...

Since when is this a blueprint?

NO search radar, Not even 8 SAM capacity ,it just add a SAM box on the SIDAM we already have. Fine, cant Gaijin just make those SAMs becoming a PART that can be research and apply to those SIDAM-25 we have bought.

The current SIDAM is only 8.0 and usually AAs with missiles sit at 10.0 so the BR would have to change when selecting the SAM modification. Yes that would be an option, but so far no vehicle changes it's BR depending on its modifications.

TinyTinkerTank, "but so far no vehicle changes it's BR depending on its modifications." I'm not sure I follow you here. Exactly how is that an issue?

Yeah the modular upgrade is would be a good feature but its now available for the russian BMP-s . But hey , if you have a whole new vehicle to research you need to play more and get more rp right?

DarthGergely, "I DON'T BUY IT".

Thanks for ruining CAS for everybody Gaijin!

It's called ground rb for a reason

skDoger, What's the point in even allowing Planes in Ground RB if you just explode 5 seconds after spawning in one

How is this supposed to be better than optically guides SAM which we already have? You need to wait for a Lock, first of all even be able to get one, Flairs will work against this, the Mistrals range is worse than the SAMs found on literally any other vehicle and there is no way of useing it on Ground targets, it doesn´t even have a seacrh-radar

TheAntiAirGuy, First 5km missile range. Second missile warning is 2 seconds after launch but top tier Cas is all dumb bombs and such. We have 2 agms in game and both are effective at 2.5 - 3km max.Third, the jets we have in game all rely on visual sight and things dont render after 4km.

This is very nice, thank you Gaijin. Finally Italians will be able to somehow compete against these pesky helicopters and jets.

You seem to have completely forgotten that OTOMATIC is still a thing that exists and it's really damn effective, even more than SAM's in some cases.

FokkerBoombass, You can't deny Italy needed a SAM at some point, though.

Rally hoping japan gets an aa with sams as well, pls gajin, they need it.

Im sure they will!

they said that they a

MonkeyBussiness, they are working on it , so just be patient