The Westland Scout is a light British utility helicopter, developed during the 1960s for general purpose use by the British Army. Appearing in pilots’ hangars in update 1.91, the Scout, along with the navalized Wasp, will become one of the first vehicles available to players in the upcoming British helicopter tree, also set to arrive with the next update!

Development on the Westland Scout began in the late 1950s, however not at the Westland company, but at Saunders-Roe. Saunders-Roe developed their Saro P.531 light utility helicopter, which itself was based on the design of a previous piston-powered helicopter. The Saro P.531 already had several prototypes built and tested by the time the company was acquisitioned by Westland, who in turn, decided to continue development of the P.531.

As a result, in the early 1960s, the Westland Scout was created. The Scout conducted its maiden flight in August 1960 and was well-received with both the British Army and Royal Navy during testing. Following the favorable reception, the helicopter was subsequently ordered into production for the Army as the Scout AH Mk.1.

As work on the Scout steadily progressed, Westland continued developing a navalized version of the vehicle in parallel. The ‘Sea Scout’, as it was initially designated, only featured several minor design differences from the base model, such as a wheeled undercarriage and foldable blades and tail section, along with some other differences. After being reviewed by the Royal Navy, the ‘Wasp’ as it eventually became known, entered service with the Royal Navy in 1963, alongside the Army’s Scout.

Both versions of the helicopter took part in combat operations during their service, most notably in Borneo, the Falklands and Northern Ireland. In the end, around 280 machines of both types were built, including export models. 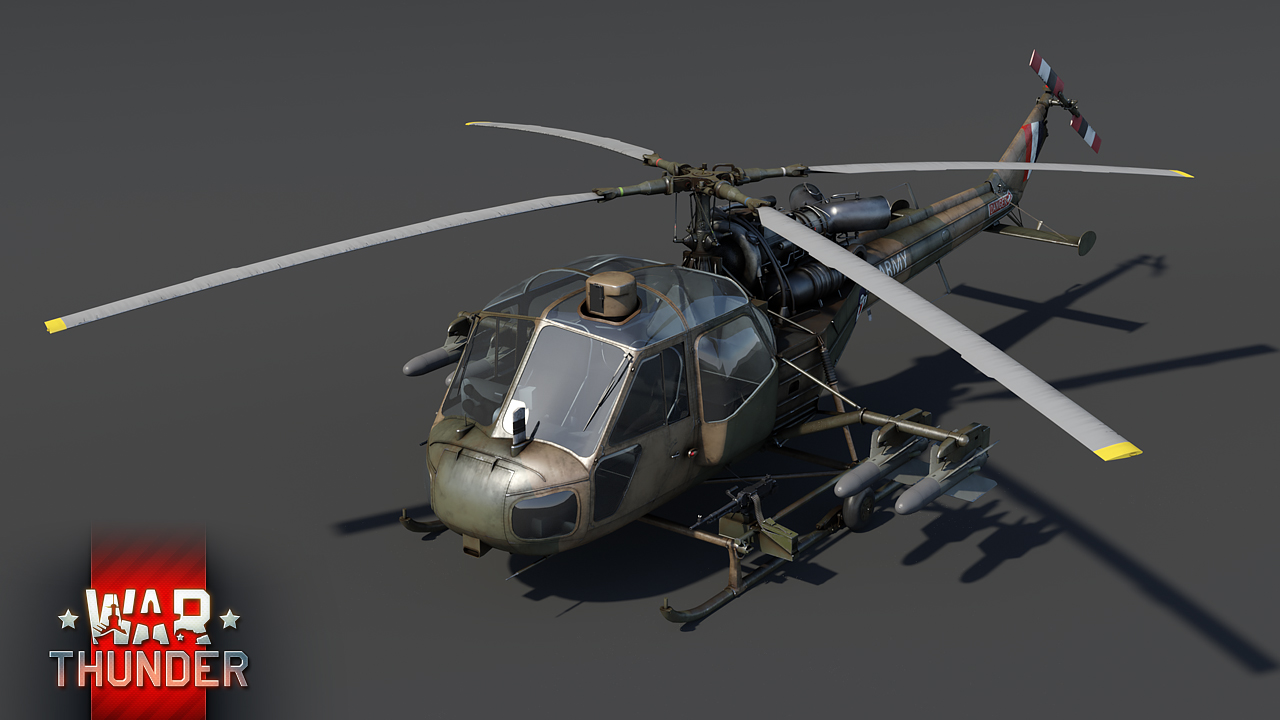 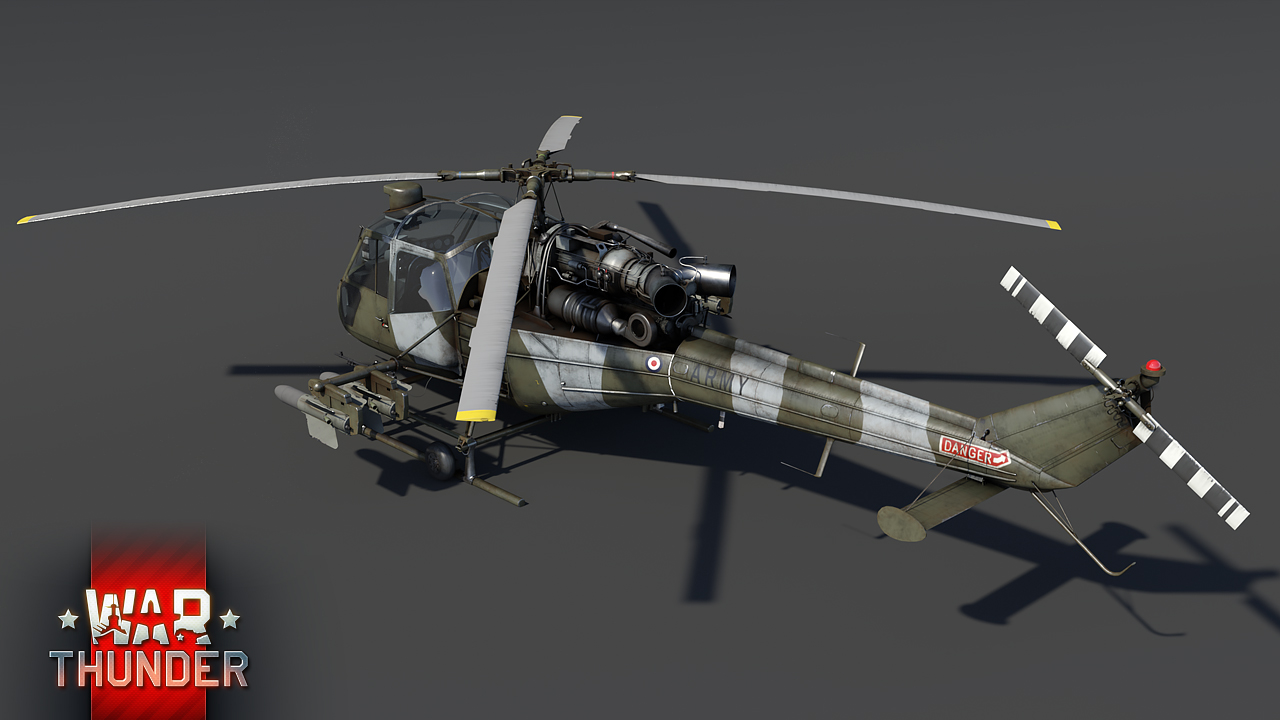 In War Thunder, the Scout and its naval counterpart - the Wasp - will be among the first vehicles awaiting pilots in the brand new British helicopter tree, coming to the game with the upcoming update 1.91. Featuring performance typical for early turbine-powered helicopter designs along with modest firepower, both the Scout and Wasp will be the perfect starting vehicles for pilots just getting their feet wet with helicopters in general and British machines in particular!

Despite being practically the same design, the Scout AH Mk.1 (army variant) and Wasp HAS Mk.1 (naval variant) do possess some differences that set the two versions apart which extend beyond simple visual differences.

In terms of general flight performance, both versions are unsurprisingly similar to each other. However, with the Scout AH Mk.1 weighing about 200 lbs (~100 kg) less than the Wasp HAS Mk.1, it’s able to reach a higher top speed of 131 mph (211 km/h) compared to the Wasp’s 120 mph (193 km/h), despite using the same Rolls-Royce Nimbus turboshaft engine.

As a result, this gives both the Scout and the Wasp comparable flight characteristics to other nations’ early helicopters. This, in addition to their rather small silhouette and great agility, makes them highly suitable for sneaky attacks from cover. On the other hand however, their lightweight design and small size don’t accommodate for great protection, meaning that enemy fire is best to be avoided whenever possible.

Speaking about attacks, some pilots are likely wondering what weapons they’ll be attacking with and rightfully so! Unfortunately, those looking for a heavily armed gunship helicopter will likely be let down by the Scout and Wasp. However, for those pilots which have already flown into combat at the controls of other nations’ starter helicopters will feel right at home with the Scout and Wasp as well! Namely, the arsenal of the Scout/Wasp, although modest is no less deadly, consisting of two rifle caliber machine guns and up to four SS.11 ATGMs.

The Scout AH Mk.1 and Wasp HAS Mk.1 are both arriving to War Thunder as part of the new British helicopter tree with the upcoming update 1.91 and will be available to all pilots upon release of the update. In the meantime however, be sure to follow the news for more information regarding the next major update coming to the game very soon. Until then, clear skies pilots!

Commenting is no longer available for this news
Rules
Bandog03
34

YESSSS MORE HELICOPTERS JUST WHAT THE COMMUNITY CONSIDERES A PRIORITY cmon lets get real helis are just another beacon for hype at this point they get destroyed by a sam that even sniffs at them. and if u try and use ur range you cant even see tanks so yah il pass

Parity, that's what it's for.

Not sure if u noticed but taking in what the community wants is not a priority to Gijain. Also rangefinders have a limit. I dont expect a m1a1 or t80 to hit a heli from 6-7km on a regular basis, not to mention ping and packet loss might be a factor.

Is this really what we were supposed to be exited about? much "wow" I guess. Don't get me wrong I'm happy about the addition but changes to helicopters in the game, such as improvements on the research mode or finally not making most of the helicopters face absolutely broken missile launchers would be nice.

This is a let-down as it is. I would have felt better about it had you not made this devblog the second one for a helicopter in a row.

Whilst this may not be to your personal taste, there are many who have been looking forward to British helicopters for some time and would not consider this a "let down". This is only dev blog No. 2, many more yet to come :)

Smin1080p, There are also many that advocate for the removal of the damb helis and no one seems to do anything

hey blitz but how would gajijn sell all of those preorder bundles for helis if people didn't know about the whole tech tree?? i mean we have all been screaming for british helicopters

Is British helicopters are the stuff you hype in priority, this update will be pure garbage...

Just like 1.89 where the japanese navy was the main focus...

Like the majority of all the updates so far

so when will the first 1.91 devblog be out

this is the third one

Sorry to crush your dream like this man but...

Hold up, if it stings like a bee, does that also mean if it hits you, does it die?

I wish people could start to whine about fixing the game after the patch drops and not in a time some weeks before the patch drops where all work for this patch is already done. They wont just drop all the months work for your incoherent whinery guys, be more conctructive and dont rant this will lead to nothing but hate and more distance and that Gaijin will never want to listen again, remember reddit drama? There are better moments and ways to give sloutions to fix the game but not like now...

Ignore them... they are just sheeps following the shepherd.

Yeah, not going to help the situation, like i've stated in the past issues need time to get sorted out +1