The Eurocopter Tiger is a modern day attack helicopter, which came to being through a joint Franco-German development project, starting back in the mid 1980s. Soon, the Tiger will become available to all French and German pilots with the release of update 1.91 and will be among the first rank VII helicopters coming to War Thunder!

3 modifications of this vehicle will appear with update 1.91:

Development on what would eventually become the Eurocopter EC665 began as early as 1984, following the issuing of a joint set of requirements by West Germany and France for a new type of multi-role combat helicopter. Although initial development was plagued by various political and economical problems leading to the effective cancellation of the project in 1986, unwavering interest in the development from both sides led to the relaunch of the project in November 1987.

Largely unaffected by the end of the Cold War in the early 1990s, development of the Eurocopter EC665 entered its final stages, with the first prototype conducting its maiden flight in April 1991. Following successful testing, the first orders for the EC665 were issued by both Germany and France in 1999. The first production model rolled off the assembly line in 2002, with subsequent units entering service in the coming years. To date, 135 Tigers have been produced with production still ongoing.

Since their introduction into service in the early 2000s, the Eurocopter Tiger has seen combat action in Afghanistan and Libya with French and German forces and most recently as part of military interventions in Northern Mali. Apart from being in active service with the armed forces of France and Germany, a number of Tigers has also been exported to Spain as well as Australia. The Eurocopter Tiger is still in active service with its respective operators to this day. 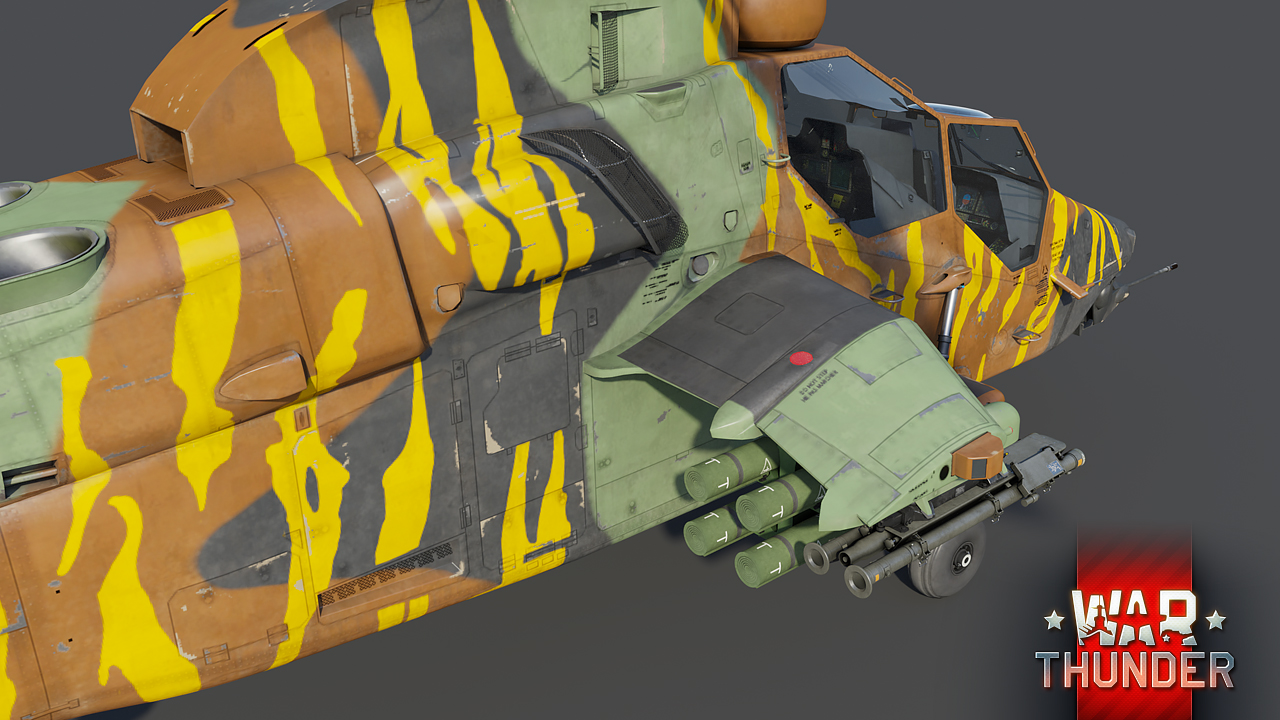 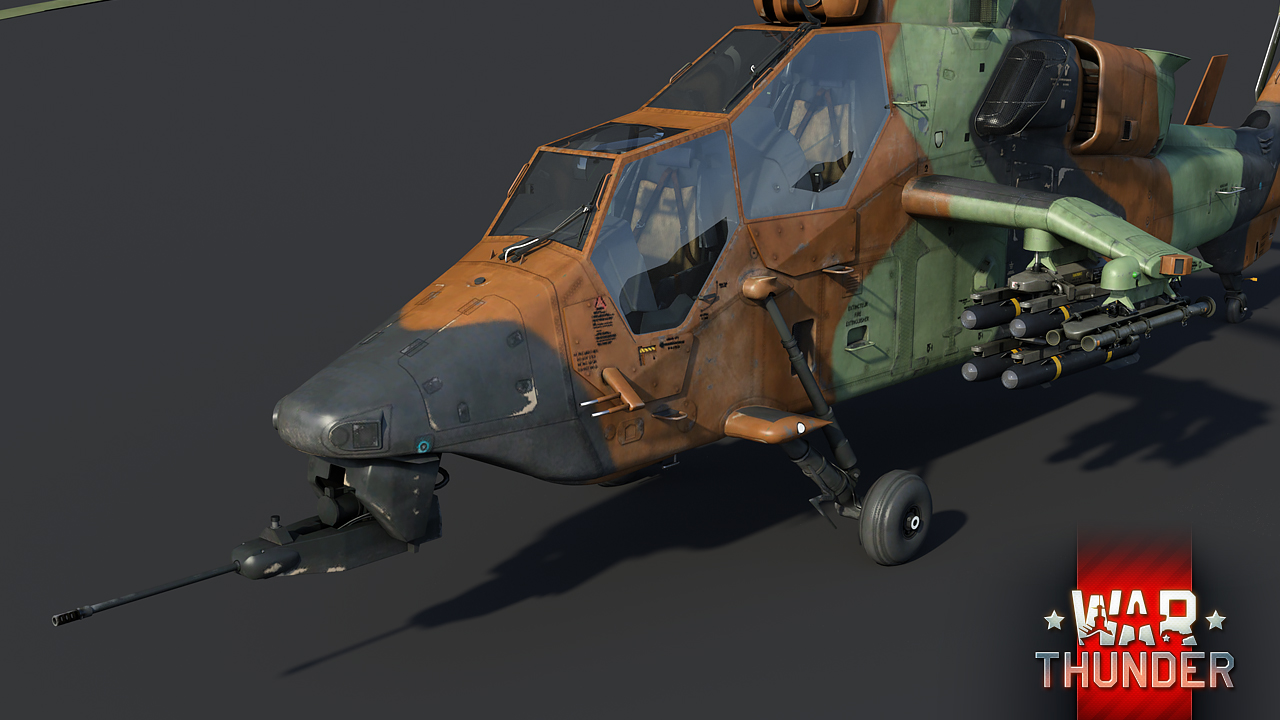 Coming with update 1.91, the Eurocopter Tiger will be among the first rank VII helicopters to arrive in War Thunder, and will take its place as the new top helicopter in both the French and German trees respectively. Representing the pinnacle of modern military helicopter design, rank VII helicopters in War Thunder will offer pilots cutting edge performance, combined with some of the most advanced weapon systems available. Aspiring pilots of the Tiger can therefore most certainly expect just as much of this 21st century avian predator!

The Eurocopter Tiger is powered by two Turbomeca MTR390-2C turboshaft engines, generating a respectable 1,303 horsepower each. This, in turn, allows the Tiger to reach a top speed of 278 km/h in level flight. While this maximum speed may be on the more average side when compared to other helicopters in the game, the Tiger’s agility, on the other hand, can only be considered second to none for a helicopter of its class!

Thanks to its all-composite body, the Tiger has a relatively low weight compared to its size, making it incredibly maneuverable as a result. Apart from considerable weight savings, the composite materials also play a major role in the vehicle’s protection. Namely, the Tiger can effectively resist small arms and heavy machine gun fire, whilst also being able to somewhat deal with light cannon fire, depending on the circumstances.

Fun Fact: The Eurocopter Tiger holds the distinction of being the world’s first all-composite helicopter developed in Europe.

While excellent aerodynamic properties, powerful engines and a high-tec composite body are, without a doubt, all very useful things to have on a modern attack helicopter, they’ll arguably only get you so far when it comes to completing your mission if the firepower isn’t equally up to scratch, right? Naturally, the engineers behind the Tiger made it possible for the helicopter to be equipped with various ordnance options, the result of which was the creation of nation-specific variants of the Tiger.

As a result, the Tiger HAP (France) and Tiger UHT (Germany) have unique weapon choices available to them. While both variants can carry the usual assortment of unguided rockets, ATGMs and AAMs, the main difference is the distinct lack of a nose-mounted 30mm turret on the Tiger UHT. German pilots may compensate for this drawback somewhat by installing fixed gun pods under their pylons. However, this option will, at the same time, prevent them from equipping any further ordnance for use against ground-based targets, so choose wisely!

In addition, we have decided to equip the PARS 3 LR missile in a nuanced format to the German Tiger, we are doing this to keep the German Tiger competitive with other nations’ top helicopters. “Fire and Forget” and “Volley Fire” will not be available to this missile at this stage as we believe that it will tip the balance too far in its favour. The PARS 3 LR will operate according to the algorithm of missiles with semi active homing capabilities and the ability to attack from the upper hemisphere in relation to the target.

The Eurocopter Tiger is coming to player hangars with the release of the upcoming update 1.91 and will become one of the first rank VII helicopters to arrive in War Thunder. In the meantime, be sure to stay tuned to the news for all the latest developments regarding the next major update coming to the game. Until then, clear skies pilots!

Commenting is no longer available for this news
Rules
von_Stauffenburg
32

Can the rewards for helos be increased so I can get this thing?

lollo2604, why not? the rewards are trash and the RP costs too much.

So with the introduction of Tier VII helicopters, will we see an RP and SL reduction for Tier V and VI helicopters, like we saw with tanks and planes?

RP and SL requirements been reduced quite a bit already, and grinding helicopters are quite easy now. I've got all German and American helos so far with ease.

NightFalcon, I found that the team with the most Hinds and Vipers always wins. Playing a huey or the first Cobra (or anything else really) is just a slaughter fest and it's really frustrating. When the enemy team is nothing but Vipers and Hinds you get 20k RP for the lost match you played for the past hour which is not ok, I would get more then that if i played helis in tank RB.

Will you decrease the RP needed for the helicopters which are currently in the tree now that there are rank 7 helicopter?

Ka-50 is going to be next as ussr heli premium

Taikapallo, dude I and my friends like that chopper and want its premium version for germany i don't buy pack that i don't like

yeah we need premium version of that.gaijin pls do that for us we really need it

Honestly dude we don't need an Apache, the Viper is basically just as good, and it's actually much faster. Also the Apache can't carry sidewinders.

then where is my floating nuclear power plant for russia??

Will existing helicopter ranks be changed aswell ? The Viper and Mil Mi-35 are basically rank VII machines. Plus the premiums like the AH-1S and Bo-105 CB-2 have counterparts (AH-1F and Bo-105 PAH) in the regular tech tree, would it not make sense for them to be pushed up to rank VI to match their regular tree versions ?

No because the regular tree bo has missles with 200mm more pen. Sure it gets 2 less missles but those missles have a much greater chance of a one shot. Typically you have to shoot more than 1 tow into an abrams to kill it.