The Westland Lynx is a British multi-purpose utility helicopter, developed during the late 1960s as a replacement for the then in service Westland Scout and Wasp. Coming as part of the British helicopter tree, the Lynx AH Mk.1 will soon make its appearance in pilots’ hangars with the release of the upcoming update 1.91!

Development on the Lynx began in the mid 1960s, when Westland sought a replacement for its existing Scout and Wasp helicopters, while also wanting to provide a more advanced alternative to the UH-1 Iroquois.

After some delays, the first prototype was ready for testing by the early ‘70s. In March 1971, the prototype conducted its maiden flight. In further sorties, the Lynx managed to break a number of world speed records for helicopters. Quite content with the Lynx’s performance, the British Army placed an order for 100 units of the type to be produced in the mid ‘70s. Subsequently, the Lynx received its official army designation ‘Lynx AH Mk.1’.

Since its introduction to service, the Lynx saw service primarily with the British Army and the Royal Navy in various different roles, including among others transport, armed escort and anti-tank warfare. Furthermore, the Lynx also saw service with countries such as the Netherlands, Norway and Argentina, while other countries like Germany, France, Denmark, South Korea, Brazil and Portugal, to name a few, still use variants of the Lynx today.

During their service, Lynx helicopters found themselves taking part in numerous conflicts, including the Falklands and Gulf wars, military interventions on the Balkans during the 1990s, anti-piracy efforts in Somalia and many more thanks to their ongoing service today. In total, around 450 Lynx helicopters of various modifications have been produced by 2009, with production still ongoing today.

In War Thunder, the Lynx AH Mk.1 will be among the top helicopters awaiting pilots in the new British helicopter tree, coming soon to the game as part of update 1.91. Combining excellent mobility with numerous lethal ordnance options, the Lynx AH Mk.1 will provide seasoned British pilots in the game with an all singing, all dancing utility helicopter, perfectly suited for top rank battles!

Fun Fact: A modified version of the Lynx, called G-LYNX, set a new absolute speed record for helicopters, attaining a maximum speed of 400 km/h (249 mph) - a record that it still holds to this day.

One of the arguably most notable features of the Lynx AH Mk.1 are its absolutely superb flight characteristics. Powered by two Rolls-Royce Gem 2A turboshaft engines, generating almost 900 horsepower each, the Lynx is able to reach a top speed of 273 km/h in level flight, while its sleek aerodynamic design allows it to even perform some aerobatic maneuvers such as loops and rolls, without much difficulty.

However, while the Lynx AH Mk.1 offers some of the best flight characteristics compared to other helicopters currently present in the game, this does come at somewhat of a cost. Namely, to save on weight and preserve the vehicle's excellent agility, engineers kept the Lynx's protection fairly light. In fact, the protection on the Lynx AH Mk.1 will most of the time be insufficient to protect it from incoming fire, meaning that aspiring pilots of this machine will need to resort back to the Lynx's speed and agility to avoid enemy fire in the first place.

Apart from cutting edge flight performance, the Lynx AH Mk.1 also boasts a vast and comprehensive selection of deadly ordnance loadouts. As such, pilots will be able to outfit their Lynx AH Mk.1 with various secondary ordnance options, ranging from cannon pod and rockets to several types of ATGM and Stinger air-to-air missiles in numerous combinations 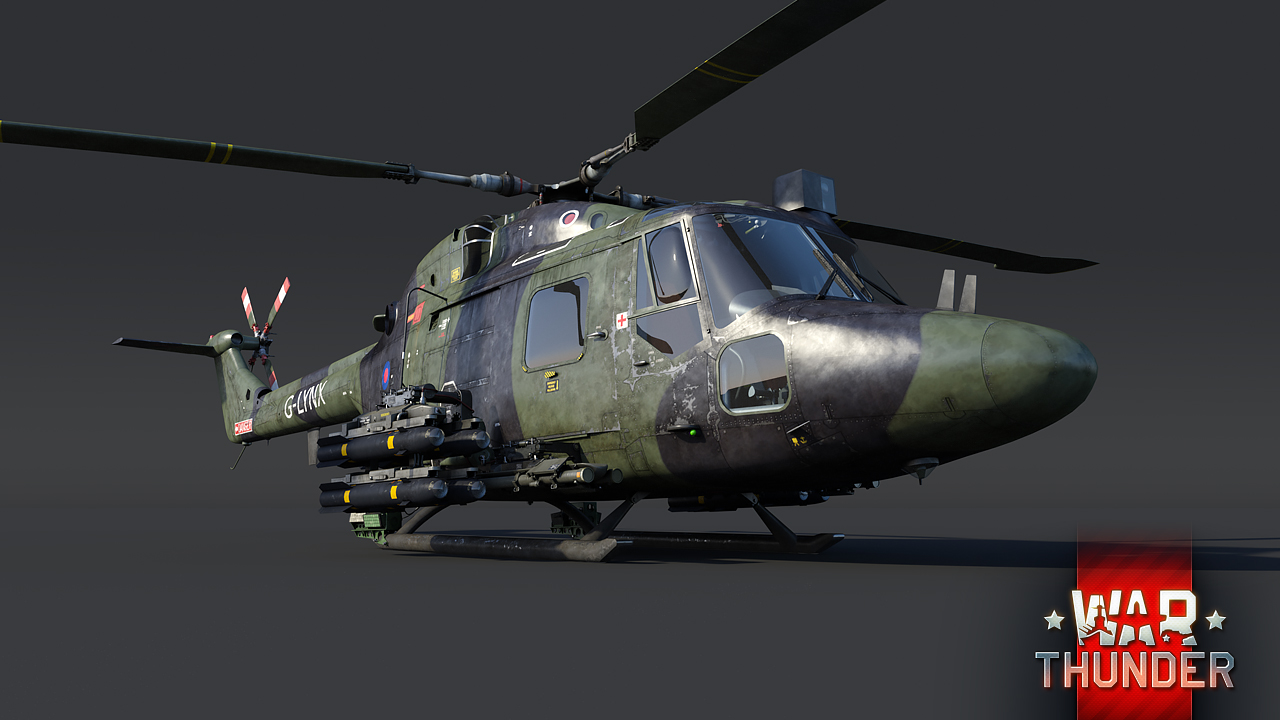 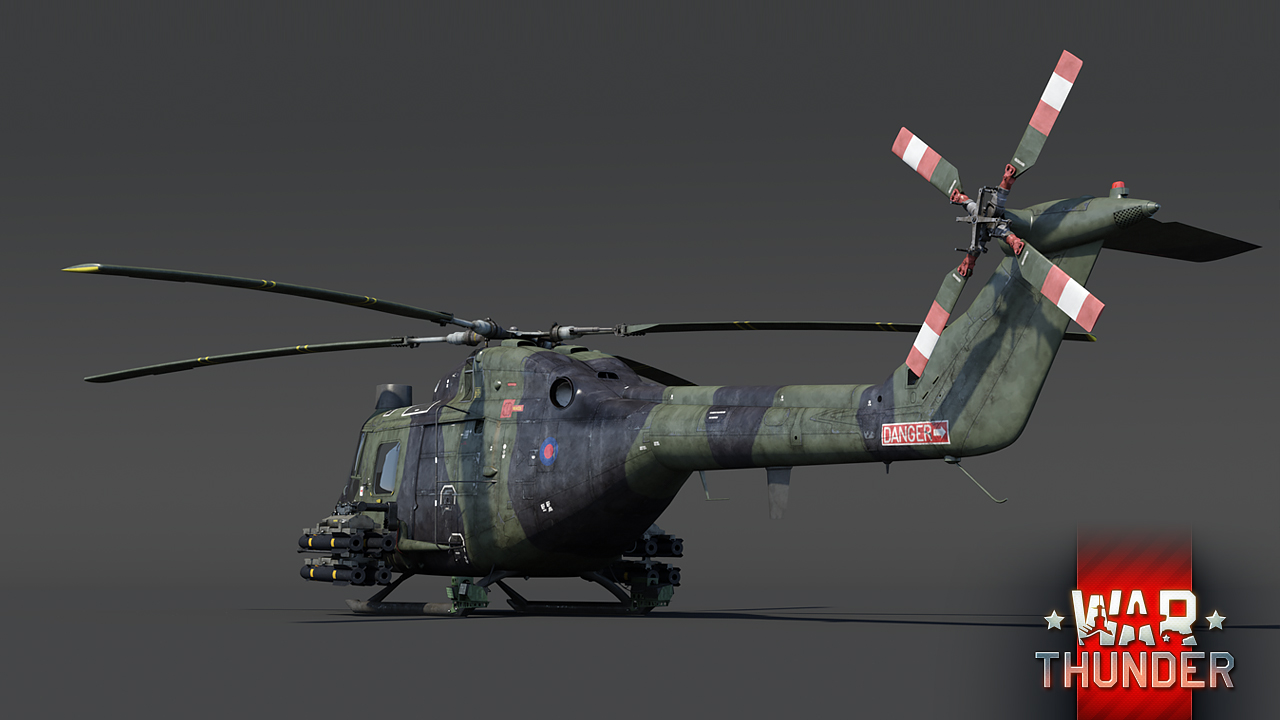 As a result, aspiring pilots of this machine will be hard-pressed to find themselves in a situation for which a Lynx AH Mk.1 would be ill-equipped for. On the other hand, its varied secondary arsenal will also make the Lynx a highly accessible helicopter to many players, given its capability to cater to a number of different playstyles.

The Lynx AH Mk.1 will become available to all War Thunder pilots as part of the upcoming British helicopter tree, coming to the game with the release of update 1.91. In the meantime, be sure to keep a close watch on the news for all the latest developments regarding the next major update coming to the game very soon. Until then, clear skies and good hunting pilots!

Commenting is no longer available for this news
Rules
RePlayBoy101
122

speed demon or not these things are destroying top tier games ... remove them from ground force battles

Yeah, really destroying them when they die within 5 seconds of spawn to Tunguska/adats/roland... Yup, game is ruined now.

Stabu, i want to play the tanks i want and not the AA to hunt these things ... cuz then im not playing tanks but a turret simulator ... these things are gamebreaking and even more so when you can spawn them as the first vehicle

Whilst they may not be directly to your taste. Lots of people do like them and the British have been requested for quite some time.

Smin1080p, Yeah that's why queue times are so quick for helicopters /s

Also I expect British helis to be sub par to all others since that's how it goes with the brits usually.

Yeah man I play tanks as well and those things are ruining the 10.0 experience.

iMaGePeruz, Than yourre team ir you have to spaan in a aaa at the start ( war is not Fun )

yeah, why not? they just care about the $$ and all the no-talent hacks that have the money to blow on shit that makes them able to compete

Can We Talk About Removing Heli's? Or At Minimum Rebalance Them For The Best?

What? You mean give them an actual chance. Right now it's death to spawn in a Heli.

they must remove them

The problem is , Helos are waste of time . For now you can be so sneaky u want but . SAM RADAR can find you behind trees , mountains , hill without any line of view . Figther planes are easy to launch and even more danger and you have AA-missle or not no chance because you cant sreach targets , avoid SAM/SPAA and watch planes same time . Helos are just sitting ducks dont waste your time .

Yet people still fine a way to complain about them.

Helicopters are great!! Before they were added I spent several hours a day playing and spent hundreds of dollars on this game. Thanks to this addition I no longer have fun playing and barely spend any money at all on the game. Thank you for curing my addiction for me Gaijin.

Before i only played 5min each day... after they added helecopters i play eachday for many hours

Fungusar_DK, I thought you claimed to play naval exclusively? You were the guy who was whining about stuff OTHER than naval being added just last patch...

Thank God this is not RL. I would like to see the Syrian rebels yell, stop using Helicopters damn government troops, you are spoiling our fun.

Premium probably going to be the best model of the heli, just like the german bo-105, as always premium pay to win.

Oh boy here we go, you can call it pay to win or whatever but as you can see Gajin is a Free To Play game, they need to make money somehow. That's kinda why GE and premium stuffs exist. Yes it may be a bit on the expensive side for some, but you have to think of the work and other stuff that goes into the game and models. They're gonna make premiums that look good to players that way they can get revenue. I know I'm going to get hate from this but it's the truth mate.

how is the premium bo105 the best german heli? the others have superior atgm's

SithDoesTankTat1, It has 8 ATGMs compared to the tech tree only has 6 on the max loadout.

Sooo, this is nice and all but as a person who bought the mi24d I feel really shafted now. The mi24d is trash compared to this or the AH1s. The mi24 gets low pen rockets and atgms meanwhile this gets Hellfires AND stingers at the same time?? The AH1s already got 8 missiles with more pen than the mi24d or Huey.

Its only really the AH1Z thats better than the Mi24s, the premium is the worst of them but the tech tree ones all get ridiculous AA missiles and IRCMs

tangerine_flugel, floofel we already got AH-1Z that is techincally Rank VII :O