USS Atlanta is the lead ship of her class of eight light cruisers, initially built for the USN as flotilla leaders in the late 1930s. Soon, captains in War Thunder may look forward to having the chance to command the iconic USS Atlanta herself, upon her arrival in the game as part of the upcoming update 1.91!

Atlanta-class light cruisers came to being in the late 1930s, during which the US Navy was considering a multitude of different design proposals for new light cruisers, which would be in accordance with the limitations set by the Second London Naval Treaty of 1936.

Having realized that all outstanding requirements couldn’t be met with a limited displacement design, the decision was eventually made to adopt a smaller light cruiser design to act as a destroyer leader. As a result, the proposed design of what would become the Atlanta-class was selected for construction, with an initial order for four ships being issued in April 1939, followed by a second order for four further vessels in September 1940.

USS Atlanta, the lead ship of the class, was laid down on 22 April 1940 in Kearny, New Jersey and was subsequently commissioned into service in December of the following year, shortly after the US’ entry into WWII. Atlanta would soon receive its baptism by fire, taking part in the Battle of Midway in June 1942 while on screening duty for American aircraft carriers.

USS Atlanta also took part in heavy fighting during the Battle of the Eastern Solomons, as well as the subsequent Naval Battle of Guadalcanal. During the latter, USS Atlanta received mortal damage during a Japanese night attack, both from enemy as well as friendly fire. Although the USS Atlanta made it through the night, it became clear the next morning that the damage was too severe to deal with and the order for scuttling was issued on 13 November 1942. Atlanta was subsequently struck from the Naval Register in January of the following year. 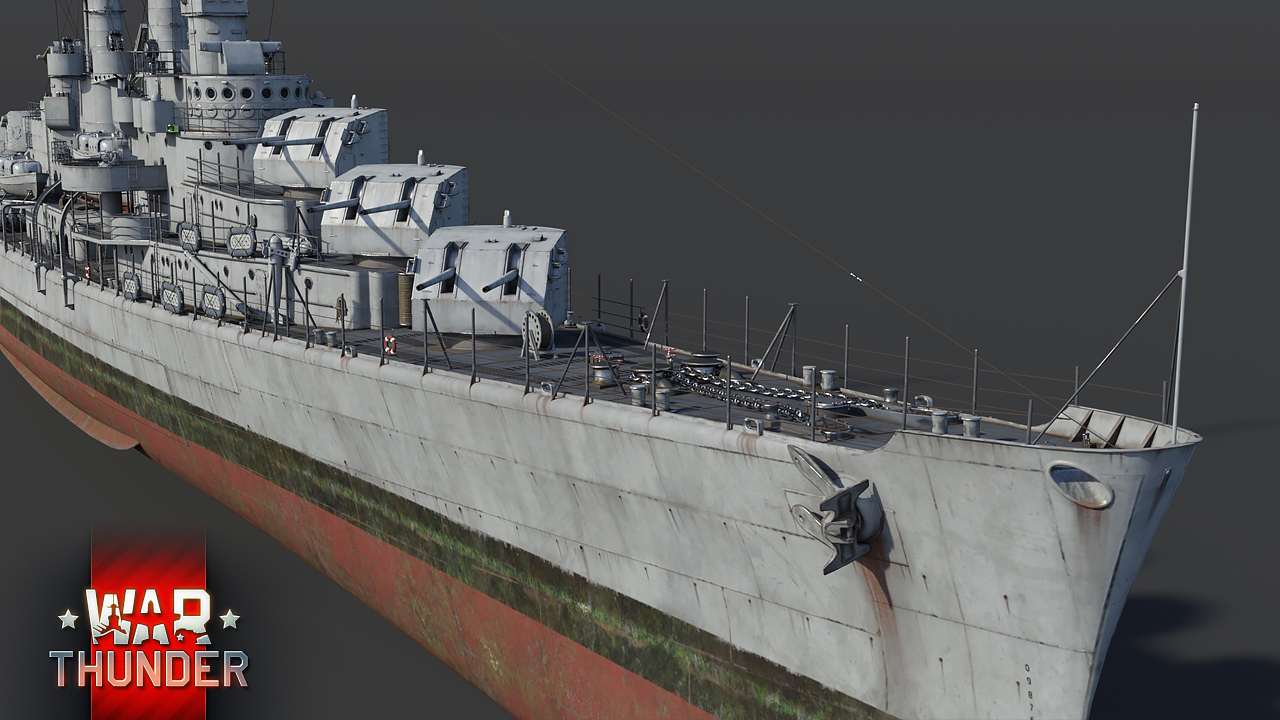 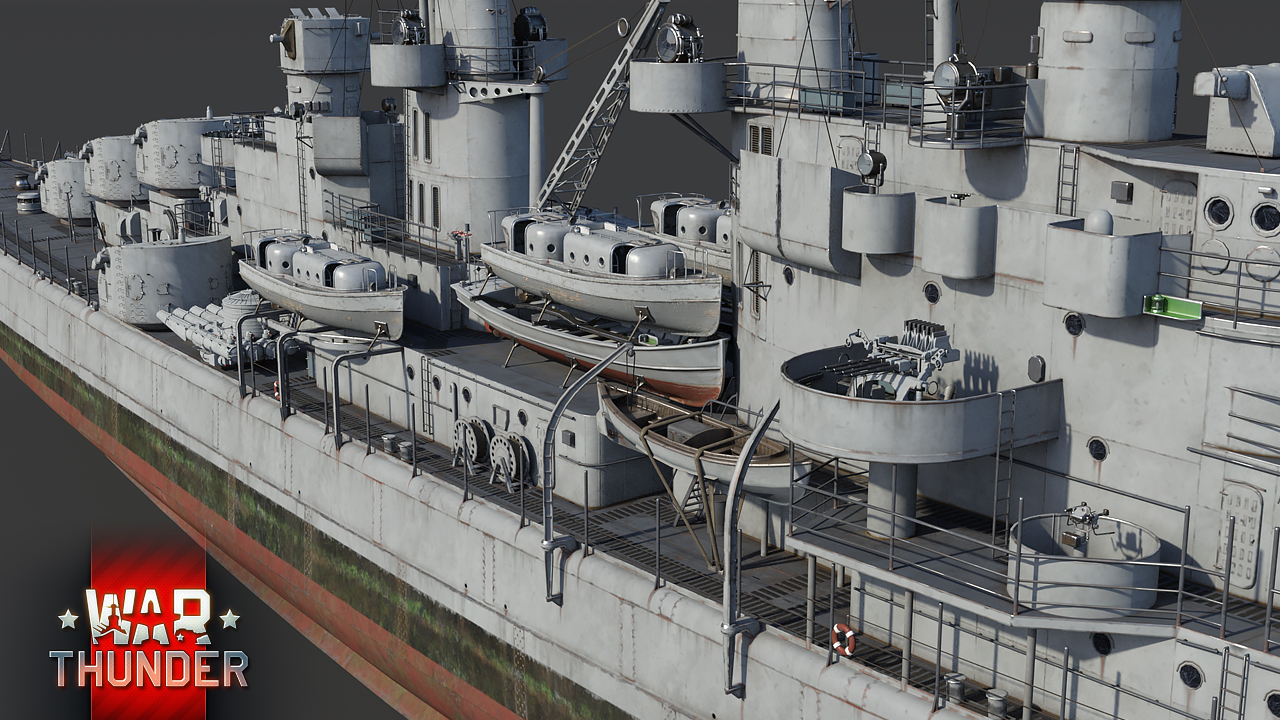 In War Thunder, USS Atlanta will be a new light cruiser, coming to rank IV of the American naval tree with the release of update 1.91. Being a highly requested addition to War Thunder naval forces, USS Atlanta will offer its future captains quite an unusual set of traits, unique to this warship in particular, giving it a high degree of versatility.

USS Atlanta’s standout feature is its immediately noticeable large number of primary weapons. In fact, it pretty much defines the ship’s silhouette! Armed with a whopping eight double 5-inch (127mm) cannons, USS Atlanta will become the most heavily armed ship in War Thunder, at least as far as primary weapons count is concerned.

The American 5-inch guns, often found on destroyers, are proven tools of destruction in War Thunder naval battles. Their dual-purpose nature makes them extremely versatile, giving the ship which is equipped with them the capability to effectively engage both surface targets as well as aircraft. Therefore, having a total of 16 of these lethal cannons will mean that aspiring Atlanta captains will be formidable foes when engaging lighter vessels, destroyers and aircraft.

Versatile and vigilant are exactly what captains of USS Atlanta will have to be in battle. Due to the ship only having four triple 28mm cannons acting as auxiliary weaponry, captains will more often than not have to take care of aerial threats themselves in the heat of battle or risk succumbing to an air strike. Fortunately, however, with the help of proximity-fused HE-VT rounds, you’re more than well equipped to do so!

However, USS Atlanta is quite poorly protected for a light cruiser. With her armored belt only being a maximum of 3.75 inches (95mm), Atlanta is unable to sustain concentrated enemy fire for a prolonged period of time.

Taking on heavy, and in some cases, light cruisers may not be the best of ideas when commanding USS Atlanta; not only due to her lackluster protection, but also due to the limited damage which the 5-inch cannons can inflict upon more heavily armored targets. In such cases, captains will want to rely on Atlanta’s good mobility, since the ship can reach a top speed of 32.5 knots (60 km/h), to get them out of a tight spot.

USS Atlanta has set course for players’ ports and is expected to arrive with the release of War Thunder update 1.91. In the meantime, be sure to stay tuned to the news for all the latest developments regarding the next update. Until then, captains!

Commenting is no longer available for this news
Rules
ShimakazeChan
22

Yes. Another Club'm All American Cruiser. I Really Hope There's Something To Counter This & The Brookyln. Otherwise You Just Doomed Naval Even More.

Smin1080p, Can i charge with my Fletcher againts it?

flyingseal, I'm Not Sure If You Have Played Naval By That Statement. Brookyln Cleans House And Is Fully Meta.

This is much better than the last devblogs. Now it definitely feels like devblog season. Good work on the model!

Ouiche, Ouiche. Damm, that sounds like some good news I hope we'll get to see way more cool and fun stuf for navy, ground forces and a bit of air. at least I can say that you guys started the devblog season off with a bang. Keep it up :)

Lynx devblog has been best devblog for me so far

Another cruiser that will take a month to grind. Fix Navy RP gain!!!

One month for a TopTier ship is not to bad

Months??? i Grinded all the American, British and Japanese in 3 months.

Fungusar_DK, go out side get some sunshine before you get rickets son! for that too have happened you would be a serious candidate for DVT and other associated health issues or you just bought a truck load of eagles and paid ur way through literally minimum of 14-16 hours a day considering the queue times at the BR IV (check the maths if u want) so you can admit your talking excrement or contribute truthfully!

Ah, great! Now this is the kind of dev blog i was looking forward to!

Fantastic. Hard to keep up with things in War Thunder these days!