News
back to news
Development
4 September 2019

HMS Arethusa: Mistress of the Seas

The development of the Arethusa-class light cruisers began because their predecessors - type Leander ships, were not very suitable for fleet operations at sea nor as a lead destroyer. Type Leander cruisers didn’t have the maneuverability to be leaders, nor did they meet the minimum silhouette requirements for night operations. British engineers had to create a new, lighter, and more maneuverable ship based on the Leander.

The result of this endeavour was the creation of the Arethusa-class in the early 1930s - a light cruiser design based on the Leander-class, with reductions in firepower, protection and other aspects to accomodate for weight savings. The design was soon approved for construction, with six ships being initially ordered, although five were actually built in the end.

HMS Arethusa, the lead ship of her class, was laid down in January 1933, being commissioned in May 1935. Upon her completion, HMS Arethusa was immediately assigned to the Mediterranean, where she would also witness the outbreak of WWII in September 1939. Early in the war, HMS Arethusa operated off the coast of Norway, assisted in the evacuation of troops from France in 1940 and protected numerous Allied convoys in the Atlantic and Mediterranean.

Later in the war, in 1942, HMS Arethusa suffered heavy damages as a result of an airborne torpedo attack by axis forces, knocking the ship out of action for almost 2 years before finally being repaired in the US. Arethusa’s final major operation of WWII were the Allied landings in Normandy in 1944. HMS Arethusa was put in reserve in the immediate postwar years and was later scrapped in May 1950. 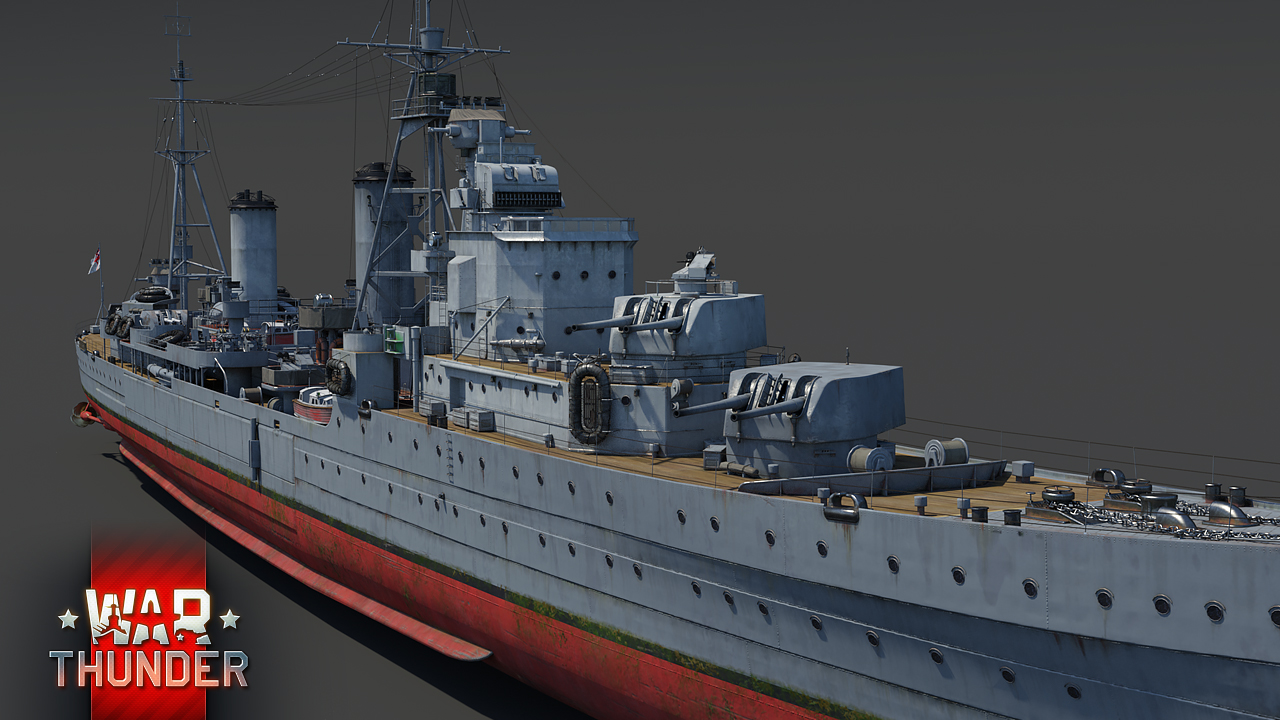 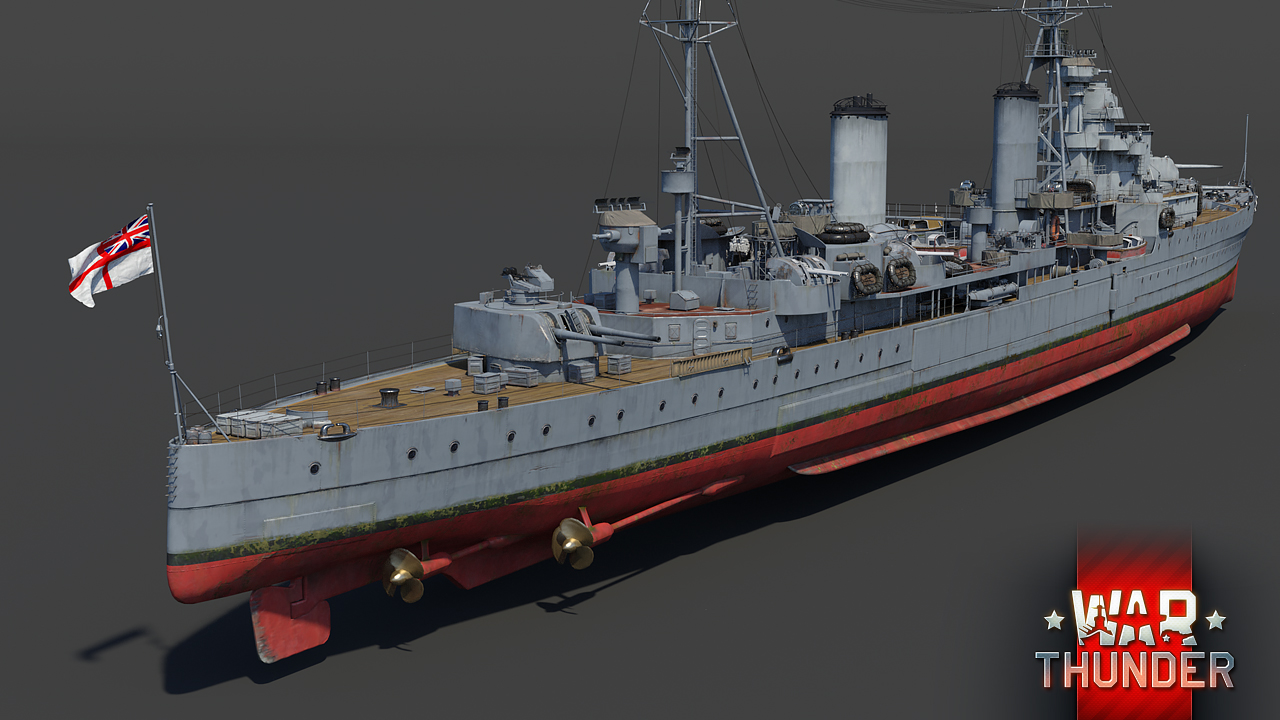 In War Thunder, HMS Arethusa will be a new light cruiser coming to rank IV of the British naval tree, with the release of the upcoming update 1.91. With her light protection, good mobility and typical early light cruiser firepower, HMS Arethusa will help bridge the gap between older and newer, more powerful British cruiser designs by combining certain aspects found on both into a single vessel.

HMS Arethusa’s primary armament consists of six BL 6-inch (152mm) Mk.XXIII cannons, split between three dual turrets. While this may seem a bit modest to veteran captains, well versed in the capabilities of some of the more powerful cruisers, for a lower ranked light cruiser, this primary armament will prove itself as quite sufficient in dealing with most threats that this vessel will likely face in battle.

In the game, HMS Arethusa will appear in her 1943 configuration, namely, the one that was fitted to her during her repair and overhaul works in the United States. As such, HMS Arethusa will feature a substantially strengthened auxiliary weapons arsenal compared to her original configuration. Captains can therefore expect to have access to four dual 4-inch (102mm) dual purpose cannons, two quad 40mm Bofors cannons and up to a total of 13 20mm Oerlikon cannons. In addition to this, HMS Arethusa is also fitted with two triple 21-inch (533mm) torpedo launchers in case you wish to settle a gentlemen’s dispute without engaging in the nasty old business of conventional gun fights.

Arguably the largest drawback which aspiring captains of HMS Arethusa will have to come to grips with is its very light protection. In fact, the ship’s belt armour only goes up to 2.25 inches (57mm), with the magazines being shielded by up to 3 inches (76mm) of armour plating. This, in combination with a crew complement of only 623 sailors - the lowest of any British cruiser currently in the game - gives HMS Arethusa a rather lackluster combat endurance and should therefore certainly not be employed as part of a vanguard task force.

Although the protection on HMS Arethusa can certainly be considered as lacking, its mobility, while not outstanding by any means, will certainly get the job done. Powered by four geared steam turbines, generating a total of 64,000 horsepower, HMS Arethusa is capable of reaching speeds of up to 32.6 knots (60 km/h), placing her roughly in the middle of the top speed spectrum for cruiser vessels.

Commenting is no longer available for this news
Rules
blbobobo
12

Cool ship! With naval enduring confrontation, the game should hopefully be more fun. Please don't stop working on Naval, it has a lot of potential!

Why should they stop working on it?

Fungusar_DK, cause no one actually plays it? no wait, that's exactly the reason why they continue to work on it.

Not with this update. Heavy Cruisers will come for the British.

Smin1080p, Why are you giving the British this? Admiral Hipper is the same speed so actually its mobility isn't so good as you say it is. Also with those guns and armor it looks like another unremarkable 5.3 cruiser while Germany and Japan are getting the Admiral Hipper and IJN Mogami. At least the Americans are getting something that looks interesting with the USS Atlanta, but the Brits get more garbage. Maybe if you weren't releasing TWELVE premiums this patch you'd have time to work on more Brit stuff.

I hope in the future Gaijin to introduce in naval battles battleships Bismarck,Tirpitz,Scharnhorst,Hood,Yamato,Arizona and more.You say battleships is slow is true but it will be more fun to shoot from distance with Bismarck for example in another battleship and more realistic because your engine video game and physical effects are very good.I think every player which play in naval battles want to add battleships in the game.

yeah... and submarines plus aircraft carriers

Fungusar_DK, submarines are ok but aircraft carriers are not

Scharnhorst is confirmed by data miners. Theres files for it in the game already

NightFalcon, A lot is in the files Yamato etc etc because single missions and such

The ONLY time i was able to sink 2 destroyers with my reserve LS was in rough stormy seas (sailed between the waves and went unseen) i got right next to them. It was a hell of a lot of fun but i never see bad weather now... FFS give us some more bad weather and high waves... dont want spoon fed kills, oh and bad weather is the only equalizer for the ships.

very nice ship! now please add M728 CEV, you did give the brits the AVRE Centurion after all

Something British, hopefully this time the comments won't be full of Pillocks shouting "What about British vehicles!" "Britain suffers!" "Everyone else gets super sonics before Britain"

You think a mediocre addition to a game mode most people don't care about changes the fact Britain is missing out on multiple major features? Not everyone's so short sighted they can't see when Gaijin is trying to placate whilst hold onto their bigotry.

ESanders, *Facepalm. Bigotry?!? I've heard it all now. If there was any nation War Thunder wanted to "get back at" it would probably be Germany. You know, for the whole breaking of the non-Aggression pact. Or the US perhaps. They did fight a Cold War. But Britain... C'mon man. Next I'll hear that there's rampant racism at Gaijin because there isn't an African tech tree. And remember this is Gaijin not some company in the west. They don't get afraid because someone used a hot-button word like bigotry.

Cpt_Jack_Irons, hahaha like I care at all what that attention ***** does, thinks or cares about. Maybe she should try out as an insta**** maybe that'll make me care about any opinion she has and holds onto. But even then I doubt I would care or give a single **** what she says/thinks/cares about