Admiral Hipper is the lead ship of her class of three heavy cruisers, built for the Kriegsmarine during the mid 1930s. After having seen extensive use during WWII, Admiral Hipper is now ready to make an appearance in War Thunder too, becoming the first German heavy cruiser, soon available to all captains with update 1.91!

Following the signing of the Anglo-German Naval Agreement in June 1935, Germany was permitted to build, among other things, heavy cruisers up to a total displacement of 50,000 tons. The previously developed Admiral Hipper-class heavy cruiser design was chosen for construction, with five ships being initially planned to be built.

The five ordered ships of the Admiral Hipper-class were laid down between July 1935 - August 1937. However, only the first three were actually fully constructed and commissioned into service between 1939 - 1940. The fourth ship - Seydlitz - was scuttled in 1945 still being incomplete (as a conversion into an aircraft carrier), while the fifth ship - Lützow - was also sold incomplete to the USSR in February 1940.

Admiral Hipper, named after an imperial German admiral, was the first ship of the class to see completion, being commissioned into service in April 1939. After passing sea trials, Admiral Hipper was assigned to her first combat mission - Operation Weserübung - the invasion of Denmark and Norway, where it took part in a battle with the British destroyer Glowworm and also participated in the sinking of the trawler Juniper (930 tons) and the military transport Orama (19,000 registered tons). Subsequently, Admiral Hipper steamed out into the Atlantic to intercept allied shipping in December 1940, but without significant success. The first campaign wasn’t particularly successful, but during the second campaign in January and February of 1941, the Admiral Hipper attacked SLS-64, an unprotected convoy - this attack on ship count alone, was the most effective from both world wars.

Admiral Hipper was then transferred to Norway, where it took part in raids against the arctic convoys headed for the Soviet Union. As part of an operational group, it took part in Operation Rösselsprung (Knight's move) which, although not a success, resulted in the almost total destruction of the allied PQ-17 convoy by German submarines and aircraft. In December of 1942, during Operation Regenbogen (Rainbow) a battle took place in the Barents Sea which was unofficially labelled as “New Year’s Battle” or “New Year’s Shame” the ship was damaged and sent back to Germany for repair. The failure of the operation led to a historical decision by Hitler  to order the scrapping of all large warships. Admiral Hipper was transferred to the reserves and at the beginning of 1945, arrived in Kiel where it was damaged during allied air strikes in May of the same year. The defenders on the partially disarmed ship showed no enthusiasm for its survival and as a result, the ship burned out and sank to the dock seabed. After the war, the ship was once again raised and taken apart for scrap up to 1952. 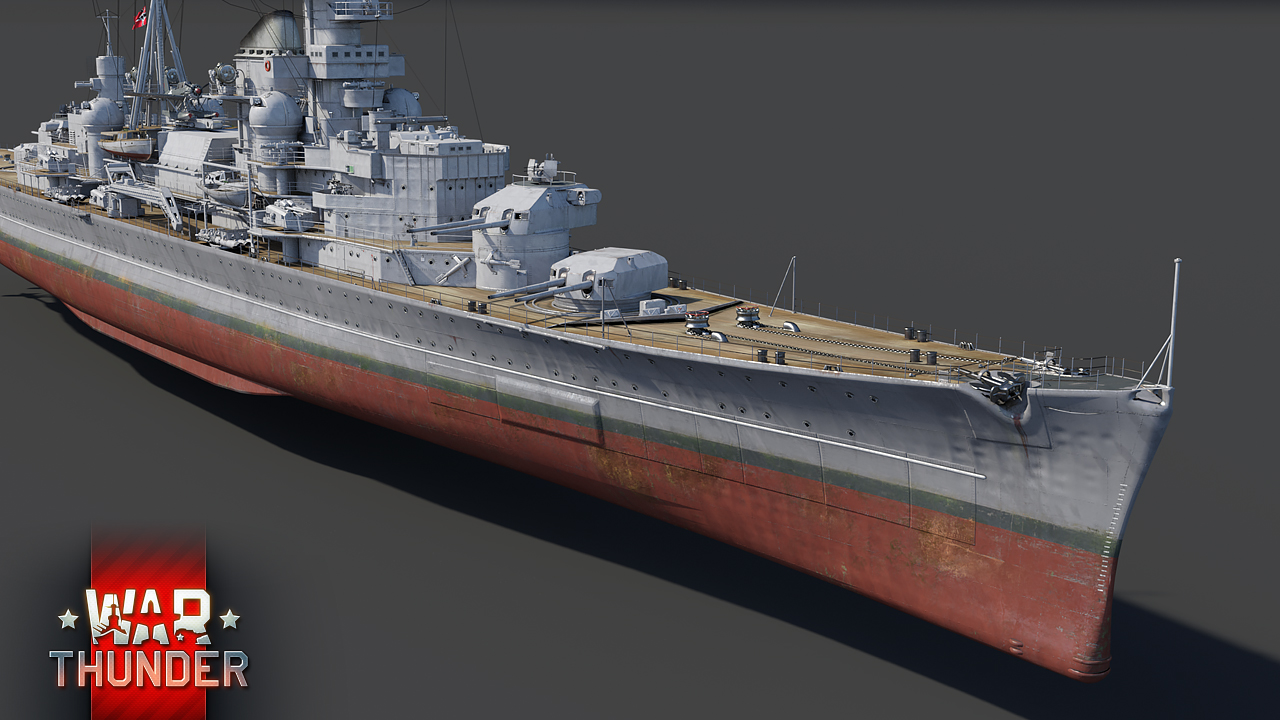 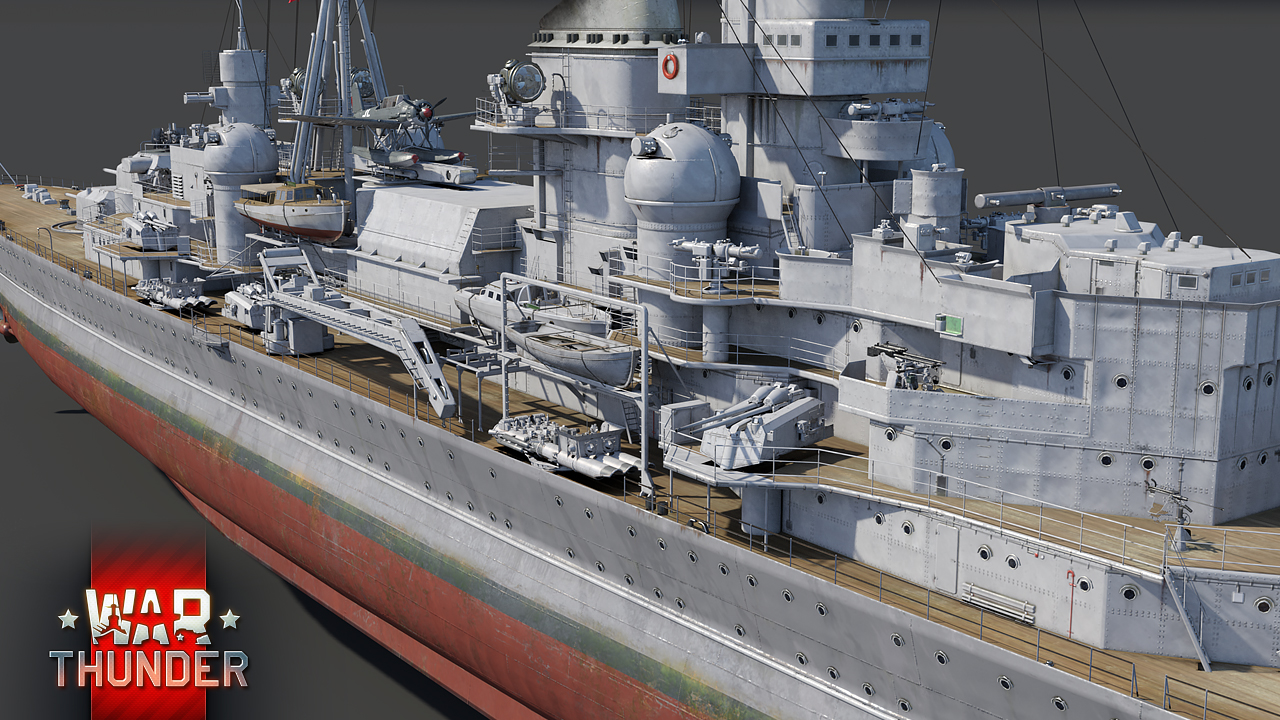 In War Thunder, Admiral Hipper will be the first heavy cruiser, arriving to rank IV of the German naval tree with the release of the upcoming update 1.91. Combining devastating firepower, armour protection and a large crew complement, Admiral Hipper will truly justify the “heavy” part of its heavy cruiser classification and will offer captains with an experience like no other ship of this class does!

Admiral Hipper rocks a primary armament consisting of a total of eight 203mm cannons, spread across four dual turrets. As a result, Admiral Hipper will certainly belong among the more powerful warships in the game as far as primary firepower is concerned, meaning that aspiring captains of this vessel don’t need to worry much about how to sink their opponents as long as the shells find their target.

Apart from the already formidable primary weapons, Admiral Hipper also sports a not so inconsiderate arsenal of secondary weapons. Namely, captains will have access to six double 105mm dual purpose cannons, six paired 37mm semi-automatic machine guns, as well as 20mm cannons - 10 single and three quadruple mounts! All of this additional firepower is then rounded off by the presence of four triple 533mm torpedo launchers, two at each side of the hull in addition to the torpedos already loaded, the ship carried 10 more torpedoes in reserve.

However, the large displacement coming from all of this firepower and armour does come at a certain price of mobility. Although powered by three steam turbines, generating a respectable 132,000 horsepower, Admiral Hipper is only capable of reaching a modest top speed of 32.5 knots (60 km/h). While this is certainly not bad by any stretch, it is still less than some other cruisers in the game, meaning that this vessel is more likely to take on the role of a second-line ship, at least until the frontline fighters get taken out that is.

The highly anticipated Admiral Hipper is arriving to War Thunder naval battles with the release of the upcoming update 1.91 and will formally become the first heavy cruiser available to German captains. Until then, calm seas and happy hunting!

Commenting is no longer available for this news
Rules
WT_CT_Center
34

a fine addition to the kriegsmarine! in other news, is there any upcoming dev blogs for some ww2 tanks?

We got a surprise! But it's a surprise and i don't want to get promoted to rock harvester in a Siberian mine. :D

Are you going to fix maps like middle east that give one side an advantage over the other side.

Why are you asking on a naval devblog?

same as poland where one team can shoot enemy spawn point

Speak for yourself sodium chloride man. Just because you are personally not interested doesn't mean the world stops spinning. On the other hand... GAIJIN WORK ON NAVAL MOAR. IS BAD CURRENTLY

*Kipn__, Naval should be the last of the main things they fix. They need to fix air RB, maps, more game modes for air rb, etc

Flipped_StuG, It´s the internet, ofc are peolple post every brainfart

we may not have the Glowworm but we have a sister ship HMS Grafton H98 maybe you can ram it with that, still a Destroyer Leader for the G-class would be a nice 4.0 ship for Britain.

Amazing Addition To The German Tree, Now Where Is That Honorable Thing That You Guys Keep Talking About..

As the saying goes, good things come to those who wait.

CokeSpray, My wallet can only wait so long

Any news on Germany getting an IFV any time soon?

They have the Begleitpanzer. granted, it's not very good, but it behaves like an IFV for WT purposes.

PlanyKaanere, its not very good? what the hell did you smoke