The ships of the Project 68K class are a group of Soviet light cruisers initially laid down before WWII, but were later completed during the early Cold War. Soon, Soviet captains in War Thunder will have the chance to take command of Chapayev - the lead ship of the class - after its arrival to the game with the upcoming update 1.91 “Night Vision”!

Briefly: An early Cold War Soviet vessel, based on a light cruiser design from the late 1930s. Chapayev boasts excellent firepower and good mobility, making it a true ‘all rounder’ warship.

In July 1937, the USSR formally joined the 1936 London Naval Agreement. Having agreed to the restrictions imposed by the treaty, Soviet shipbuilders began developing a new light cruiser design around the treaty limitations. However, it quickly became clear that it wasn’t possible to match the new design against both treaty limitations and naval needs, despite the already applying weight saving measures. As a result, the decision was made to disregard the treaty restrictions in March 1938, with the design already being approved by the following year.

Following the end of WWII, Soviet shipbuilders quickly realized that, due to the appearance of new technologies and tactics, vessels such as the Project 68 ships were no longer suitable for modern naval combat. Thus, the decision was made to restart their construction under a modernized design. The lead ship of this class was the Soviet light cruiser Chapayev.

Chapayev was laid down in October 1939 and launched in April 1941. Having its construction suspended during the war, it was only restarted in the late 1940s, with the ship finally seeing completion and entering service with the Soviet Navy in May 1950. Chapayev served until 1958, before being assigned to support roles leading up to its retirement. In the early 1960s, the ship was ultimately decommissioned from service and was subsequently broken up for scrap in 1964. 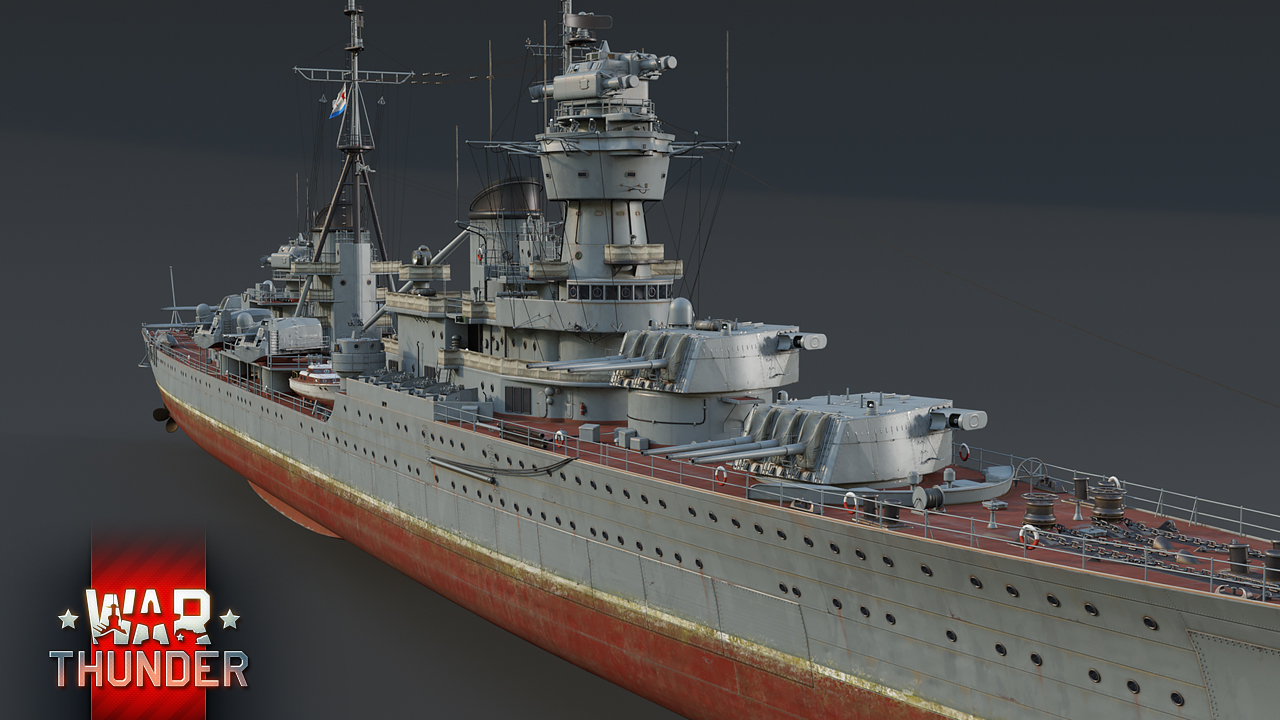 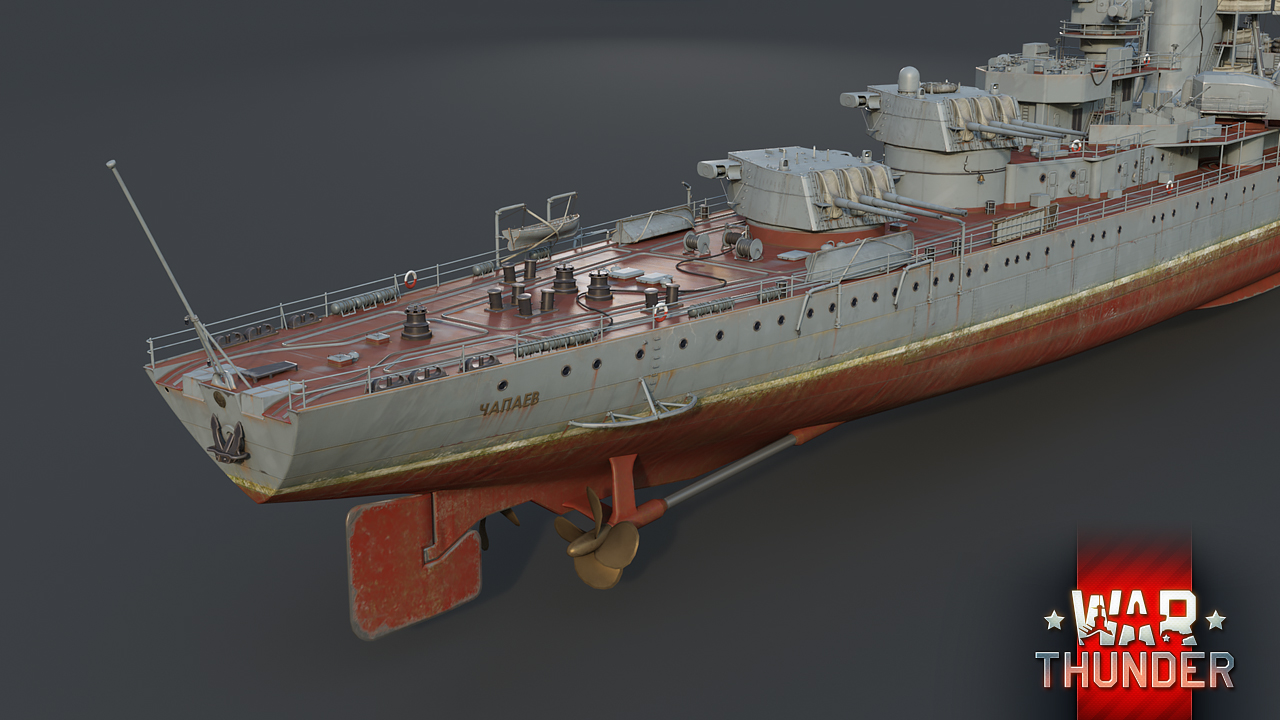 In War Thunder, the Chapayev will become available to all captains at rank IV of the Soviet naval tree. Sporting excellent firepower for a light cruiser, combined with good mobility, a sizeable crew complement and decent protection, the Chapayev will provide captains and fans of Soviet naval vessels in War Thunder with a highly versatile ‘jack of all trades, master of none’ type of warship.

Despite sharing some visual similarities with the Kirov-class, the Chapayev is quite distinctly different from its predecessor. For starters, unlike the Kirov, Chapayev was roughly built around the terms dictated by the Second London Naval Treaty. As such, the Chapayev didn’t receive 180mm guns, but was instead fitted with four triple 152mm main guns, more befitting of a light cruiser design. This also makes the Chapayev the first Soviet cruiser in War Thunder to be equipped with 152mm guns.

While the 12 main guns will surely be a considerable threat to most opponents encountered on the high seas, smaller vessels and aircraft won’t be spared by Chapayev’s secondary and anti-air weapons either. Being fitted with four dual 100mm turrets, supported by an additional 14 dual 37mm cannons, pilots and captains of smaller vessels will have a hard time punching through the concentrated defensive fire coming from all these guns. On the other hand however, Chapayev was not fitted with any torpedo launchers, leaving aspiring captains of this vessel with somewhat more limited tactical options than previous vessels did.

Fun Fact: Chapayev was named after a well-known Red Army field commander, who later also became the protagonist of one of the first Soviet sound movies, making him a well-known and beloved character among the Soviet populace.

Beside more than adequate firepower, Chapayev also features solid protection and survivability. With its 100mm thick belt armor and crew count going up to 1,184 sailors, Chapayev is able to both absorb some damage from enemy fire at longer range, whilst also having the ability to sustain enemy fire for some time thanks to its higher than average crew count. Rounding off Chapayev’s performance is a more than respectable top speed of 33.5 knots (62 km/h), which is on par with most other vessels of similar capabilities in the game.

Chapayev, along with many other new and interesting additions is coming to War Thunder very soon with the release of the upcoming update 1.91 “Night Vision”. In the meantime however, make sure to keep a close eye on the news for all the latest developments surrounding the next major update coming to the game. Until then, calm seas captains!

Commenting is no longer available for this news
Rules
AidenTRDZ
5

*shake magic 8 Ball* The oracle have spoken, and it "Cannot predict now.".

Ouiche, you should try the magic conch next time Ouiche :3

maybe tomorrow or next week

Do you have any plans to correct penetration for cruiser AP ? Japanese 8inch underperform a lot at 10-15km (43mm at 15km this is a complete joke), russian SAP from stuff like the kirov overperforms with 300pen at point blank, british 6 inch sap has the same penetration at 10 and 15km, german 150 AP seems to underperform as well at 10and 15km range.

If you made a bug report with solid sources, our dev team will sure look at it.

Ouiche, There is no first hand source, probably because the japanese burned a lot of documents towards the end, however there is second hand sources and gaijin formula for AP shells, what source was used that indicated less than 2 inch penetration for those jap 203mm ap ? Secondary sources put it at around 6 inches, makes sense since historically they didn't have the same performance like let's say hipper ap which has almost 8 inches of penetration at 15km, hipper shells pen was accurate on dev server.

Can we get a new devblog on the new sounds and engine effects? These vehicle devblogs are interesting, but as those affect everyone who plays air, regardless of nation, it would be great to hear about them. All we have at the momnet are videos players made of them on the dev server.

This is a good one https://www.youtube.com/watch?v=PWqohG3zKb8

Seconded, the new sounds will affect everyone. Air, Ground and Naval regardless of gamemode or BR. More info would be appreciated.

Orphican, last time they "fixed" sounds and effects they broke the cannons on aircraft for months

When can we expect this Update? I am very excited for it.

Stona_WT, how soon please tell us this week or next week that is all i am asking.

Soon is a terrible answer "this week" or "less than 2 weeks" is much more reassuring...

*kingstevo420, ALL MIGHTY SNAIL PLEASE BLESS US WITH YOU INFITE WISDOM.

''Cons: No torpedo armament'' Seriously guys, that's a pro, an advantage, not a con. Torpedos are more dangerous for the carrier ship than for any hypothetical target. I always drop all of my torpedos after spawning because if i don't do so they always blow up... they are literally bombs in your ship xD

Hmmm i dont agree with you there half of my 10.000 kills in naval are with torpedoes

Fungusar_DK, Whoa, and how do you use them? Directly, or indirectly? Like, throwing them in a wide arc on the enemies' trajectories from the distance, or when an enemy ship gets too close, you torpedo him to death?

In 1.91 you will be able to take torpedoes off like depth charges.

The_Great_Pigeon, why would you the only threat torps are is too people who dont grasp teh ranges on some nations torps and well Arcade is a torp spam fest you gotta watch the channels you enter because pricks like me will send full spaced salvos down those :) OP is correct if u aim at MTBs deck torps before they launch boat goes Boom