USS Cleveland: The Workhorse of the Navy
25 May 2020 Development

USS Cleveland is an American WWII light cruiser and the lead ship of the most numerous class of light cruisers ever built. Coming soon to War Thunder naval forces, Captains will have the chance to take command of a truly legendary and no less fearsome American warship in upcoming update Starfighters!

In 1938, the U.S. sought an expansion of its navy, following the increase in geopolitical tensions across the globe at the time. As a result, two new 6,000 ton light cruisers were ordered whose specifications complied with the restrictions applied by the Second London Naval Treaty of 1936. In 1939, this design was revised, having its displacement increased to 8,000 tons and the general layout resembling  a more compact Brooklyn-class cruiser.

Initially, plans were made for the construction of around 20 ships of this class. However, with the outbreak of WWII in September 1939, these plans were expanded to 52 ships and the design of the vessel had its displacement significantly increased again, since restrictions from previous treaties were no longer being taken into account. In reality however, 27 Cleveland-class cruisers would actually end up being built, with another 9 being converted into light aircraft carriers of the Independence-class.

USS Cleveland (CL-55), being the lead ship of the class, was laid down in July 1940 and saw completion in June 1942 when she also officially got commissioned into service with the USN. Upon entering service, USS Cleveland’s first mission involved providing fire support to allied troops landing in Morocco in October 1942. Shortly after, USS Cleveland set course for the Pacific Theater in December, where the ship would serve until the end of WWII.

Although USS Cleveland took part in many operations during her service career, one of her more notable engagements with the enemy was the Battle of Empress Augusta Bay, where Cleveland among with some of her sister ships, successfully defeated a Japanese task force, bound to attack US forces stationed at Bougainville, during a decisive night battle. During the battle, Cleveland-class cruisers proved the effectiveness of their advanced fire control systems and showcased the class’ versatility, dealing large damage to both Japanese surface vessels as well as aircraft.

Following the end of hostilities in 1945, USS Cleveland was briefly part of the Allied occupation force in Japan, before sailing back to the U.S. in December that year. Following a brief overhaul in January, USS Cleveland was decommissioned in June 1946 and put into reserve in 1947. Ultimately, the ship was sold for scrap in February 1960, marking the end of her service career. 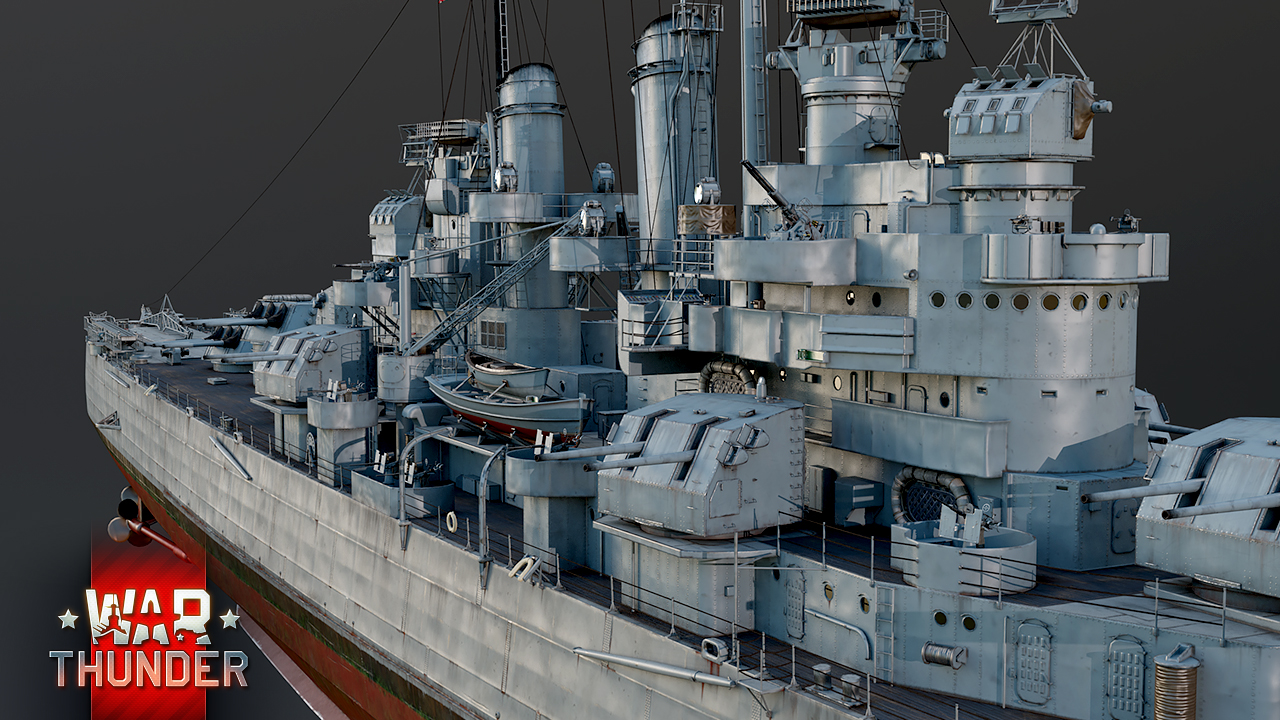 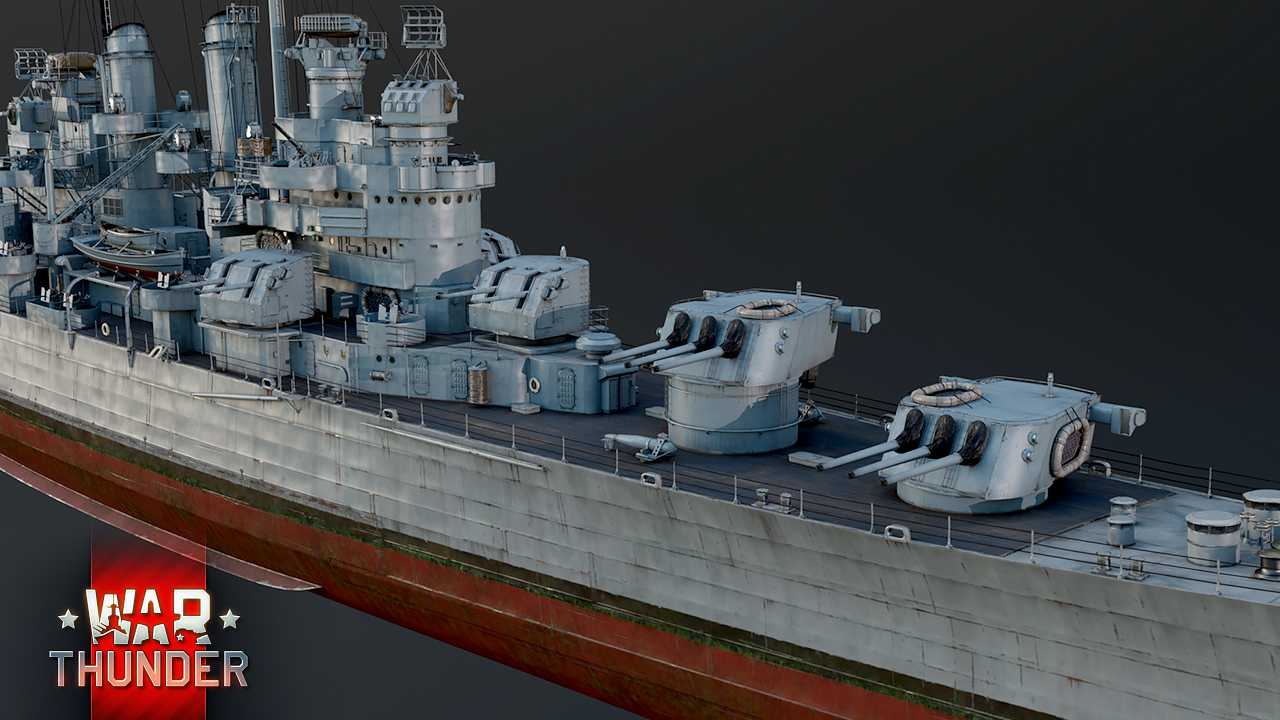 In War Thunder, USS Cleveland will be a new rank IV American light cruiser awaiting captains in port in the upcoming update Starfighters. Being heavily based on the design of the Brooklyn-class cruisers already familiar to many captains, USS Cleveland trades some of that signature Brooklyn-class cruiser firepower for improved anti-air capabilities and greater survivability.

Starting off with the most notable difference featured on USS Cleveland when compared to the preceding Brooklyn; firepower. Unlike its predecessor, USS Cleveland loses one triple 6’’ (152mm) primary gun battery turret and trades it in for two additional dual 5’’ (127mm) Mk.28 multipurpose turrets - one fore and one aft. Being part of the later production series, these cannons also feature a higher rate of fire and better ballistics as opposed to the 5’’ guns found on the Brooklyn. As a result, USS Cleveland loses some of its raw firepower but gains in versatility as its effectiveness against aircraft and smaller surface targets increases.

Speaking of gains in anti-air capabilities, this is where captains will note the greatest difference compared to USS Brooklyn. Unlike its predecessor, USS Cleveland is armed with four dual 40mm Bofors as well as 13 single 20mm Oerlikon cannons. These, coupled with the deadly dual purpose 5’’ cannons firing HE-VT rounds will spell disaster for any pilot that dares getting too close to this floating flak fortress!

Fun Fact: The Cleveland-class was the most numerous class of light cruisers built for the USN. Some were also converted into missile cruisers postwar and went on to serve until the 1970s!

While changes can be observed when talking about firepower, one area in which USS Cleveland saw minimal to no changes being made compared to the Brooklyn-class is protection and mobility. Being fitted with an identical propulsion system and neigh identical armor layout, captains can expect USS Cleveland to perform much the same as the Brooklyns they’ve gotten used to so far.

However, unlike the Brooklyns, USS Cleveland boasts a much larger crew complement consisting of 1,255 sailors and officers. As a result, USS Cleveland can better absorb damage sustained during combat, resulting in significantly higher combat endurance.

USS Cleveland is already steaming at flank speed for War Thunder and is expected to arrive at player ports with the release of the upcoming update. In the meantime, be sure to keep a close watch on the news as we share more information on what the next major update has in store for you. Until then, calm seas and happy hunting captains!

Commenting is no longer available for this news
Rules
Falcon_One
2

Teammates as bomber gunners? Give people a reason to keep playing after they get shot down

"Cons: No torpedoes" Psycopaths: I see this as an absolute win!

Cool another thing to get beached in with the tiny shallow maps.

With no dovblegs over the weekend I was starting to get withdrawal but it's okay now. I don't play Naval much at the moment (too many other fun toys that I'm grinding for right now), but I gotta say, Gaijin's artists always do a stellar job on these boats.

they get them outsourced i think. the best thing about the game and gaijin doesnt even do it themselves.

I like the eclectic mix in this update - New navy, fast jets, old heavy French tank, thank-you Just one question - B-26 Marauder - please can you tell us if this is still in development?Oh, and by the way, it's 'nigh' not 'neigh'.

I like the eclectic mix in this update - New navy, fast jets, old heavy French tank, thank-you Just one question - SdKfz 251 and /or 250 - please can you tell us if this is in development?Oh, and by the way, it's 'nigh' not 'neigh'.

Also the 2 other PBMs that were data mined last year, i already have the premium version

I'm saddened that it is not modeled in sexy measure 21 or 22 camouflage.

I agree very much with you.