The Char D2 is a French interwar medium tank, developed by Renault as a cheaper alternative to the heavier and more expensive Char B1. After having seen fierce action during the Invasion of France in 1940, the Char D2 will soon fight under the flag of the republic once more on the virtual battlefields of War Thunder in the upcoming major update!

Development of the Char D2 began in 1930, while Renault still worked on the Char D1 project. Unlike the Char D1 light tank, the French military requested the development of a heavier version of the vehicle, sporting thicker armor and better mobility, which was seen as an alternative to the Char B1 heavy tank, whose numbers were projected to become limited by possible arms limitation treaties.

Renault began work on the Char D2 and with the use of the then innovative welding technique, hoped to save weight and thus also cost of the new vehicle. The first prototype of the Char D2, called Renault UZ, was completed in 1932, followed soon after by two further prototypes in November 1933. Testing was kept relatively short, or in some aspects didn’t happen altogether, in order to start production sooner. The first production orders were issued in 1934, with the first production models entering service with the French army in 1935. A second, improved production batch was ordered in June 1938, sporting a newer turret and improved firepower.

In service, the Char D2 was plagued by mechanical and reliability problems, leading to frequent breakdowns and difficult maintenance due to a lack of spare parts. Nonetheless, the Char D2 took part in actions during the Invasion of France in spring 1940 and served with French troops until the Fall of France in June.

Around 100 Char D2s were produced in total, of which many were lost as a result of breakdowns. Roughly 20 would be destroyed during fighting, with around another 20 vehicles being captured by the occupying German forces. The Char D2 did receive an official German designation, but was never put into service by German forces. 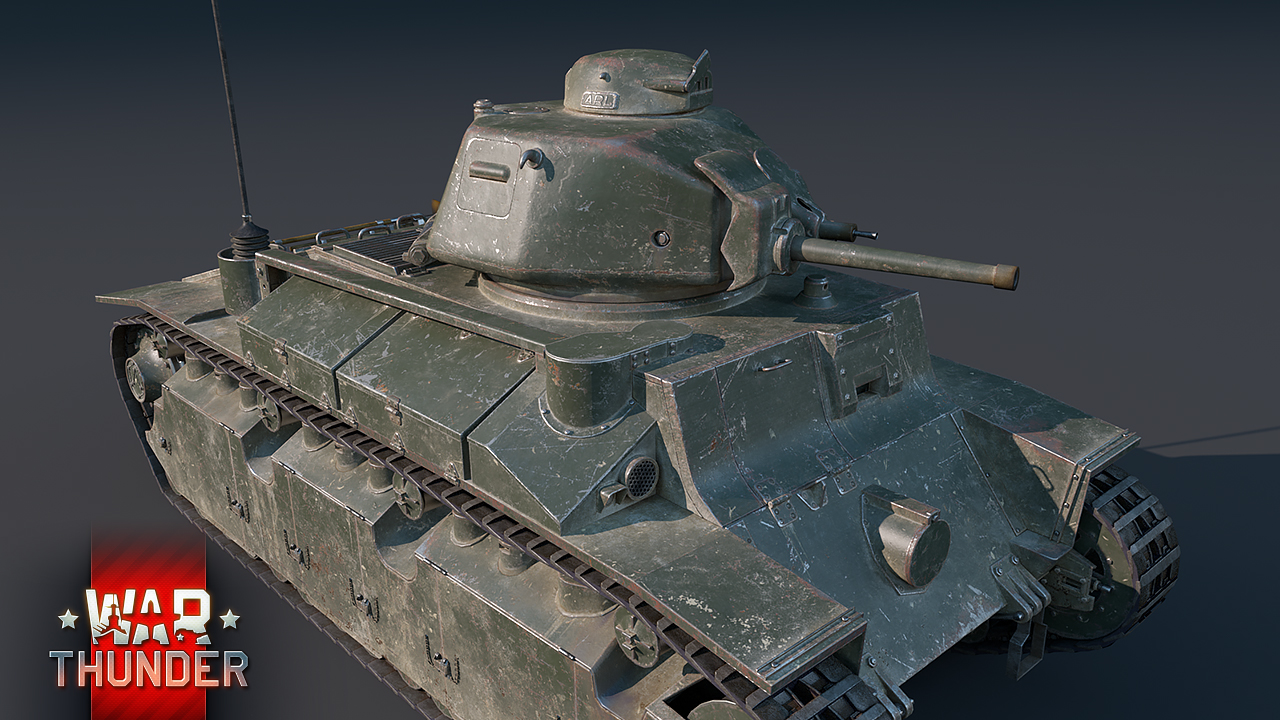 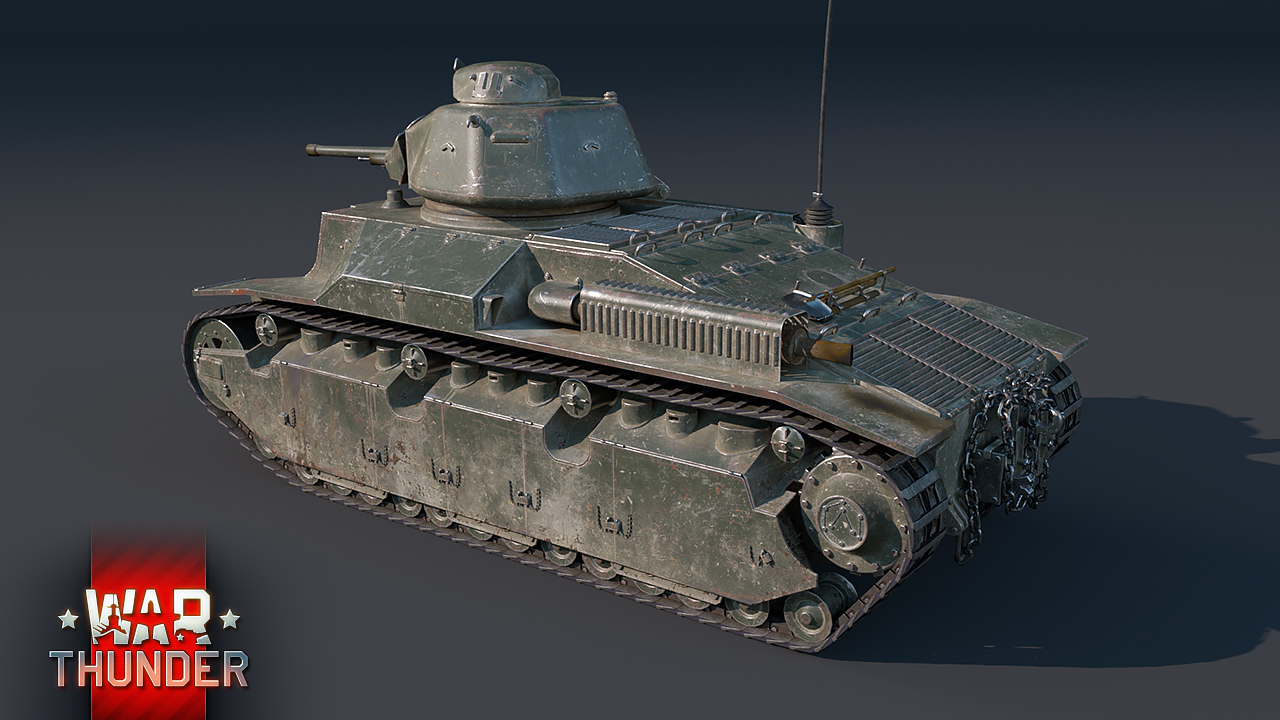 In War Thunder, the Char D2 will be a new medium tank arriving at the lower ranks of the French ground forces tree, with the release of the upcoming update. Featuring characteristics similar to that of some other French tanks at its rank, the Char D2, with its thick armor and punchy 47mm gun, is the perfect vehicle for attacking enemy-held objectives and supporting allies on the battlefield!

As already mentioned, the Char D2 is primarily armed with the 47mm SA-35 cannon - a widespread weapon, commonly found on many French low tier ground vehicles. Known for its relatively high rate of fire of 15 rounds/min and good ballistic properties, the SA-35 cannon can comfortably deal with most opposition it may face on the battlefield. Furthermore, the Char D2 is also fitted with two 7.5mm MAC machine guns.

Fun Fact: Turrets from captured Char D2s were later reused by German forces in static defense positions, while some were also fitted to armored trains.

The Char D2 also offers its aspiring commanders excellent armor protection, considering its rank. Being fitted with up to 56mm and 40mm of armor plating on its frontal turret and hull sections respectively, the Char D2 will be a tough nut to crack for some vehicles that go up against it. However, having thick armor is a bit of a saving grace for the Char D2 as its relatively small crew consisting of just 3 tankers can quite easily be knocked out with just a single penetrating round - so be vigilant out there tankers!

There is, however, one aspect in which the Char D2 sees its biggest shortcoming - namely mobility. Weighing in at 19.7 tons and being powered by a 150 horsepower gasoline engine, the Char D2 can only achieve a top speed of 23 km/h under ideal conditions. Furthermore, the resulting low power to weight ratio of just 7.6 hp/t means that the Char D2 has rather lackluster acceleration and will have problems navigating difficult terrain. As a result, tankers are well advised to pick the Char D2 for fights on even terrain or in urban areas, while more dynamic environments are better suited for some other vehicles.

Commenting is no longer available for this news
Rules
Trueno_Ae86
70

Cool tank, I really enjoy seeing interwar and WW2 Tanks being added to the game :)

Same, the D2 has been on my list for a long time, hopefully the d1 comes in time as i am a sucker for these early war tanks. cannot wait to take this renault out and trundle about menacingly during the illusive historical events. what has to be said though is the french low tier is getting rather beefy :)

Finally Gaijin does what players want! WWII vehicles instead of more unreachable Rank 7s, Hopefully this is the VE day update with only WWII and pre war vehicles. have been waiting for an update like this for a long time!

Stasio20, There is literally a 1980s AA. It was the first vehicle announced.

Thanks for adding more low tier ww2/pre ww2 vehicles. Always good to see more of them.

A very much expected French tank.I'm happy. Even happier that it gets the "good" turret and reload.

What a Chonk Boi

Ok. Are we getting the Mirage this update? Ouiche said you hope so. Can we confirm a yes, or no answer? Please.

Can't say for sure. In the Snail republic, leaking secret documents or information is passable of 25 years of "self isolation" in a Siberian mine, you have to walk 500km to get a venti latte and they got minus 7 bars of wifi in average. Became too much of a bourgeois to survive this. Babushka would be ashamed.

Stop asking please. It will come when it's ready not before.

Deathmisser, that should have been months ago, i will keep asking until the French tree is as it should be.

The people: 2nd Lecerlc when? Gaijin: Have low tier Baguette!

Nobody cares about your powercreep that you'll inevitably whine about when it doesn't go your way.

*blbobobobo, I don't really think that he's asking for a 2nd Leclerc because it's a better tank (the changes in War Thunder for gameplay would be very minor) but because they need it for a more competitive Lineup

Community: "Pls add more WW2 vehicles" - Also Community on every blog "why isn't this a top tier vehicle". The bottom line is we add a mixture of both, but unfortunately its impossible to please everyone all the time :)

Smin1080p, Is it just me or are the images kind of blurry? Or is only the one image gonna be good for backgrounds :U