The ZSD-63 is a Chinese SPAA, developed on the basis of the Type 63 APC in the late 80’s to address the urgent need for a modern mobile anti-air vehicle. Coming to War Thunder with the upcoming major update, the ZSD-63 will join the ranks of the Chinese ground tree, extending its SPAAG line with a powerful new addition!

Briefly: A 1980’s Chinese SPAAG developed on the basis of the Type 63 APC and fitted with a dual 25mm anti-air turret.

During the 1980’s, Chinese engineers finished developing a new dual 25mm anti-aircraft turret, designated as the PG87. Intended to replace the outdated 37mm anti-air cannons in service with the Chinese armed forces in the years prior, work on this replacement already began in the 1970’s, but lacking interest and shifting priorities led to the development work being prolonged into the next decade.

Around the same time, the Chinese military was in dire need of a new mobile SPAA vehicle in order to successfully be able to carry out its air defense tasks. As no new vehicle could be developed in such short notice, the decision was made to convert existing Type 63 APC chassis into SPAAG’s with the use of the newly developed PG87 anti-air turret.

The result of this undertaking was an SPAA variant of the Type 63 APC, which entered service with the Chinese military some time in the late 1980’s and early 1990’s. It’s unknown exactly how many APC’s were converted onto the SPAAG standard nor if the vehicle is still in active service today. 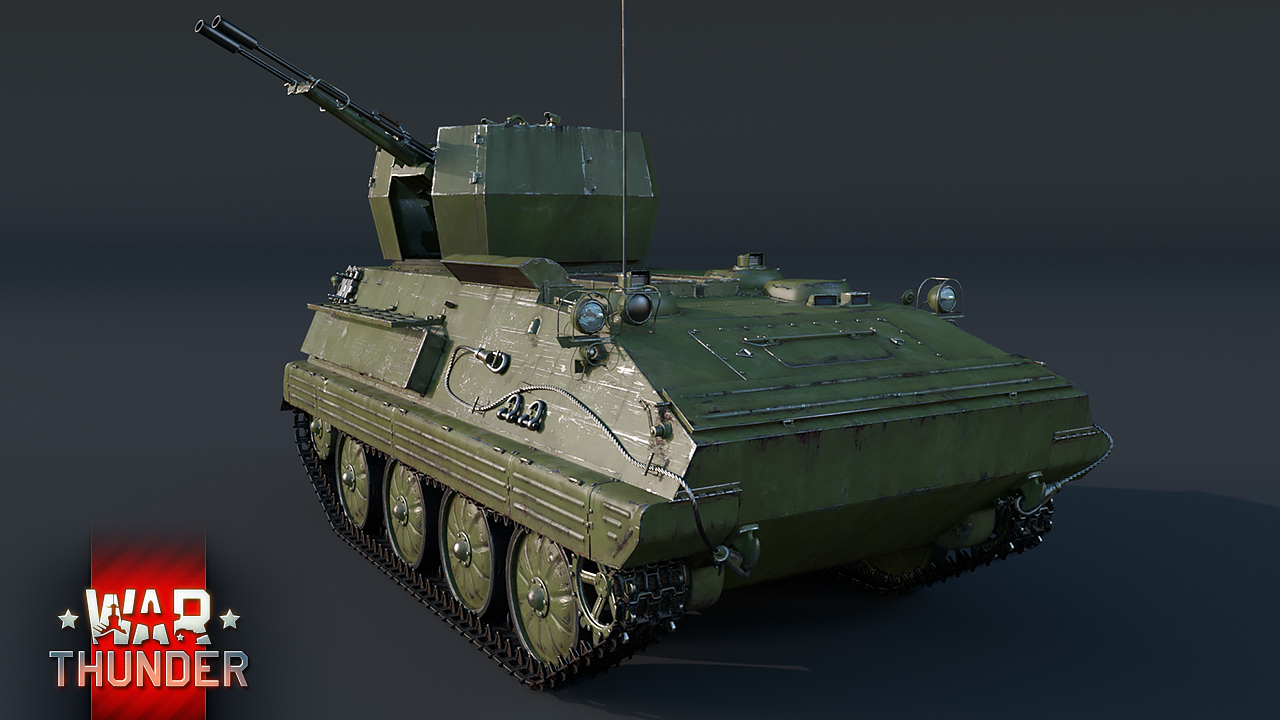 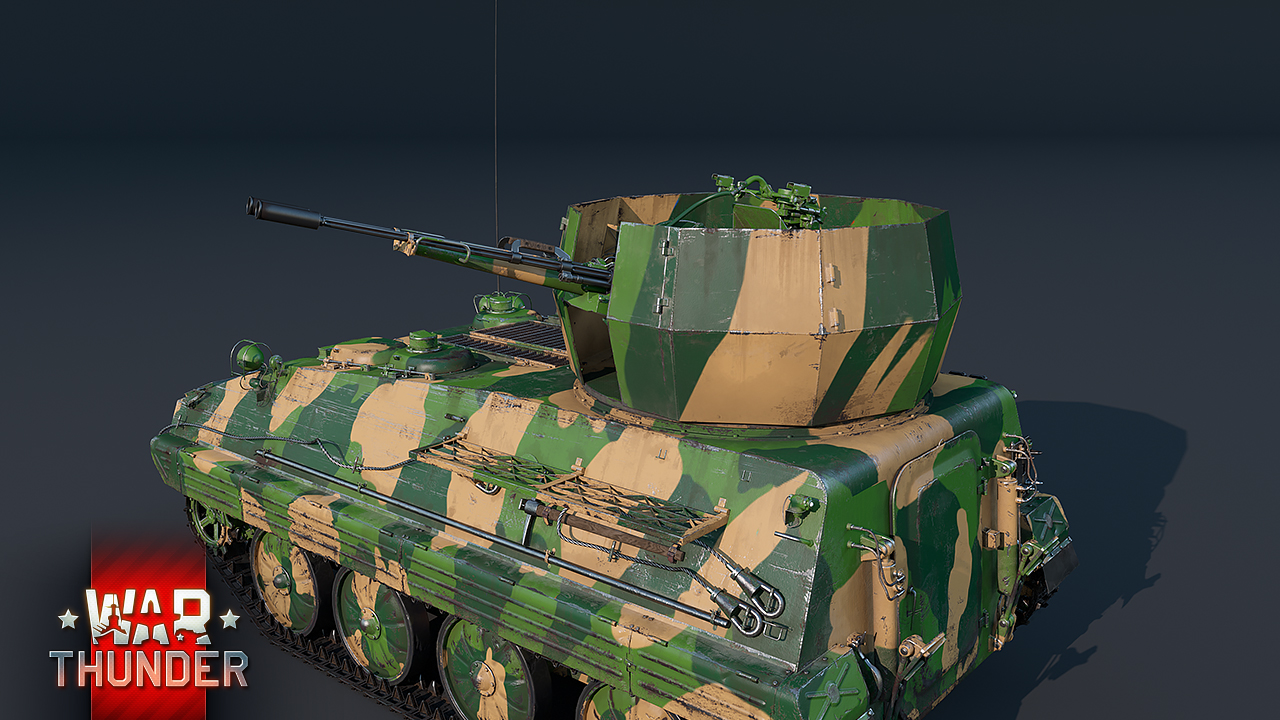 In War Thunder, the ZSD-63 will be a new low rank Chinese SPAA vehicle awaiting all tankers in the upcoming update. Being a new addition to China’s lower ranks, the ZSD-63 will give Chinese tankers much needed access to a deadly SPAA vehicle, capable of shielding its allies on the ground from pesky airborne attackers!

Being a SPAAG conversion of the widely used Type 63 APC, the centerpiece of the ZSD-63’s equipment is its dual 25mm anti-aircraft turret, mounted on top of the rear end of the vehicle’s hull. Having a high rate of fire of 600 rounds/min per gun in combination with good gun handling characteristics makes the ZSD-63 ideally suited for swatting overly confident and situationally unaware pilots out of the sky. However, tankers in lightly armored vehicles should be lulled into a false sense of security in the presence of ZSD-63 as the latter’s AP rounds can easily punch through the armor of light targets, thus also making them fair game for the ZSD-63.

On the other hand, one severe drawback future commanders of this machine will need to learn to deal with is the ZSD-63’s rather limited supply of ammunition. In fact, the ZSD-63 can only carry a total of 480 rounds of ammo (240 per barrel), split between six belts of 40 rounds, resulting in the ability of only being able to reload six times in the heat of battle. As a result, tankers will need to either carefully use their ammunition during combat to preserve a high endurance or maintain a close distance to a nearby capture point in order to be able to restock their ammo once it inevitably runs out.

Fortunately, if tankers choose the more mobility-dependant tactic of the two mentioned above, there’s a spot of good news! Namely, being based on the chassis of an APC means that the ZSD-63 boasts good mobility, even on rough terrain. Thanks to its 260 horsepower engine and a relatively low combat weight, the ZSD-63 is able to achieve a solid top speed of 60 km/h on roads, thus being more than capable of keeping up with the advance of its allies.

Unfortunately, as many seasoned tankers surely know, light combat weight also usually means light protection. This is most definitely the case with the ZSD-63, featuring only up to 12mm of steel plating acting as protection for the vehicle’s crew and modules. Furthermore, the turret of the ZSD-63 is open-topped, meaning its crew is somewhat exposed to enemy fire, especially to aircraft performing strafing runs. As a result, tankers will need to resort to making the most of the vehicle’s excellent mobility to change positions often and stay out of the enemy’s sights whenever possible.

The ZSD-63 is arriving to War Thunder ground forces as part of the upcoming update and will become available to all tankers at rank II of the Chinese ground tree. In the meantime, be sure to stay tuned to the news as we share more details on what players can expect with the next major update coming to the game in the near future. Until then, happy hunting tankers!

Commenting is no longer available for this news
Rules
OFW_Schroedinger
92

rank 2 wtf and you say you cant balance the maus

Rank is not indicative of BR. In addition, this vehicle is extreamly lightly armored, has very low ammunition count and poor AP performance on its 25mm guns.

Smin1080p, Please stop using the "no armor, low ammo, poor AP" excuse. There are plenty of vehicles in-game that have that exact issue that AREN'T tier II. Just look at the So-Ki. Would you consider that is better than this vehicle? The So-Ki is rank III, after all. Its 3.3, the original BR of the R3, but that has "low pen, low armor" and still does ridiculously well.

The vehicle is extreamly lightly armored, has generally low ammunition count, poor AP performance on its 25mms and is not that fast.

Oh yeah let's make it 10.0 without having and radar or missiles... It lacks the caliber and penetration of mid tier AA so low tier is the only option.

TinyTinkerTank, no, make it 7.3 or 7.7 rank V. are they seriously saying this thing is worse than the M42?

This is what the Chinese tree needed, thank you!

Hopefully this won't and up beeing the only vehicle they get, as it usually is. Hoping for more cool unique Chinese stuff

TheAntiAirGuy, That is, stuff that isn't copy paste from other nations like the majority of the Chinese tech tree is.

It is hoped that gaijin can give JH-7A Flying Leopard Fighter-bomber (also known as fbc-1),JH-7A so cool，Performance similar to FGR. 2。

This is another laser beam of death like R3 T20, this time for china.

MorguS, This thing doesn't have as high top speed, but it tracked, so overall it should be at least as mobile. I don't see any reason why it should be below 3.7 if the AP penetration isn't below 40mm.

and it was shooting down helis too

all because "WHY ARE THERE PLANES IN MUH TANK GAME" posters.

Pumba70, The hell are you talking about? China literally has no SPAAs until 5.7 br, Nobody asks for modern vehicles in low ranks. All I wanted is a truck with an AA gun bolted to the back and that's it.

and what about the italians ?

When you typo typo

So when are you going to focus on making sure every nation has competitive vehicles rather than powercreeping endlessly (adding late model phantoms at the same time as the lightning and before the Mirage III lmao)? Your current methods just serve to infuriate the playerbase and destroy any semblance of balance.

This vehicle is being added exactly to adress such issues as people have been asking for capable Chinese SPAAGs since they were introduced. This vehicle is not powercreeping.

May the Devblog season begin !

I think you meant Dovbleg season

Some stats for y'all. 1050m/s HE shells. 1400m/s APDS/AP shells. Infrared targeting system for use up to 7500 meters. Ballistic computer. AT TIER 2. Gaijin isn't even TRYING to balance the game anymore.

In the game version, no radar or ballistic computer added? Same for the APDS?

Since when did russian tree being not great ?

Make Russia great again? You had your glorious 3OF26, volumetric armor buff (historical though), Ka-50 spam, SPAA with missiles a patch before everyone else, mother of all nerfs on NATO HEAT-FS (for some reason soviet HEAT-FS wasn't nerf, how surprising), weakspots that have been reduced in size, ammo racks that do not set off anymore, APFSDS that produce zero spalling when passing the turret part of T-64B and still want better? You've been babysitted enough.