The F3H Demon is an early Cold War-era American naval fighter aircraft, developed by the McDonnell Aircraft Corporation as the successor to the F2H Banshee. Arriving to the game as a new American jet fighter, the F3H Demon will be one of the many new additions awaiting seasoned War Thunder pilots in the upcoming major update!

Briefly: A later variant of the Demon, the F3H-2 features missile capabilities as well as an expanded range of secondary weapons.

Development of the F3H began in 1949, with the McDonnell Aircraft Corporation starting work on developing a successor to their F2H Banshee. Although the initial design work was heavily based on the Banshee, the final design of the F3H would depart from its predecessor by most notably offering a single engine configuration and introducing a swept-wing design - a first for McDonnell.

With the outbreak of the Korean War in the early 1950s and the Navy’s first encounters with the Soviet MiG-15, the Navy found itself realizing that they lacked an aircraft which could match the MiG’s performance. As a result, the F3H was hastily ordered into production before even the first test flights were held. In fact, the F3H would undertake its maiden flight in August 1951, but it would take several more years until the aircraft was fit for service, by which time the Korean War had already ended.

The F3H Demon entered service with the USN in March 1956, by which time it had already gained an unfavorable reputation, mainly due to issues concerning its underpowered and unreliable Westinghouse J40 turbojet engine. As a result, the aircraft had to be redesigned in order to accept a more reliable alternative - namely, the Allison J71.

Due to its various problems, the F3H had a relatively short service life with the USN, being decommissioned by 1964 and succeeded by the much more successful F-4 Phantom II. Despite this, well over 500 units of the F3H Demon were built, taking part in some conflicts during the late ‘50s, such as the Lebanon Crisis in 1958. In addition, it was one of the first U.S. aircraft to be fitted with missile armament. 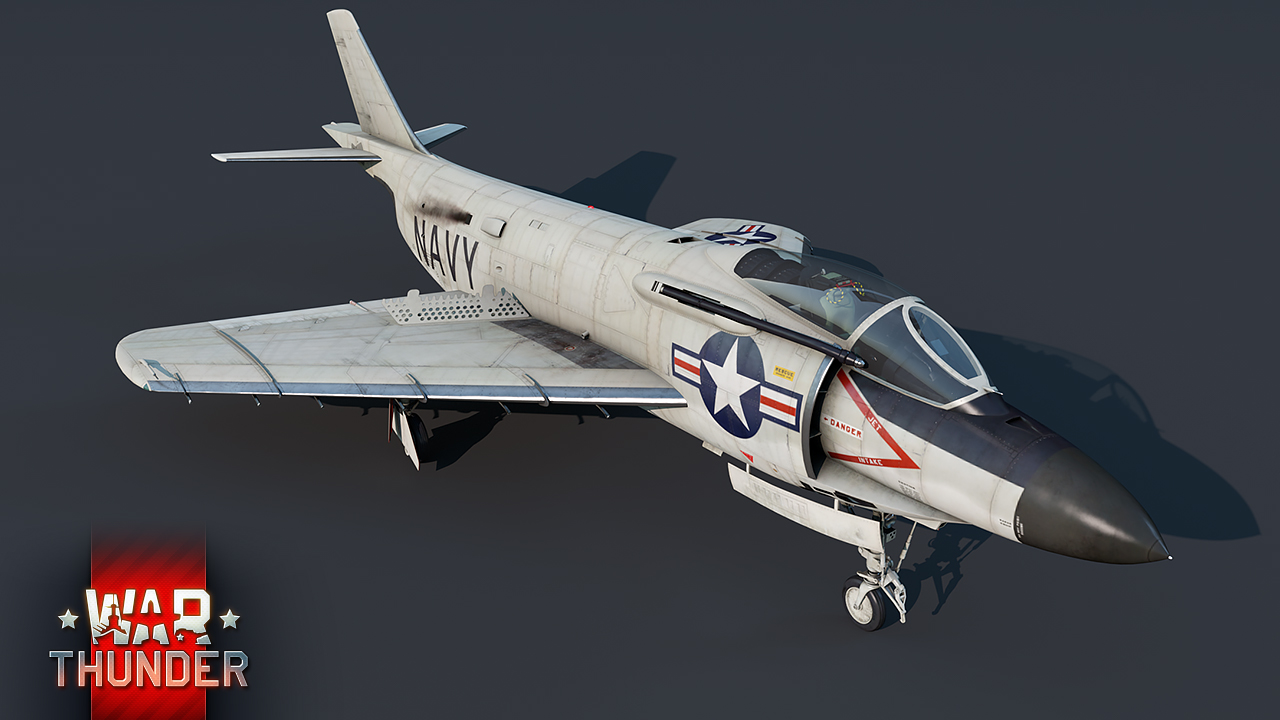 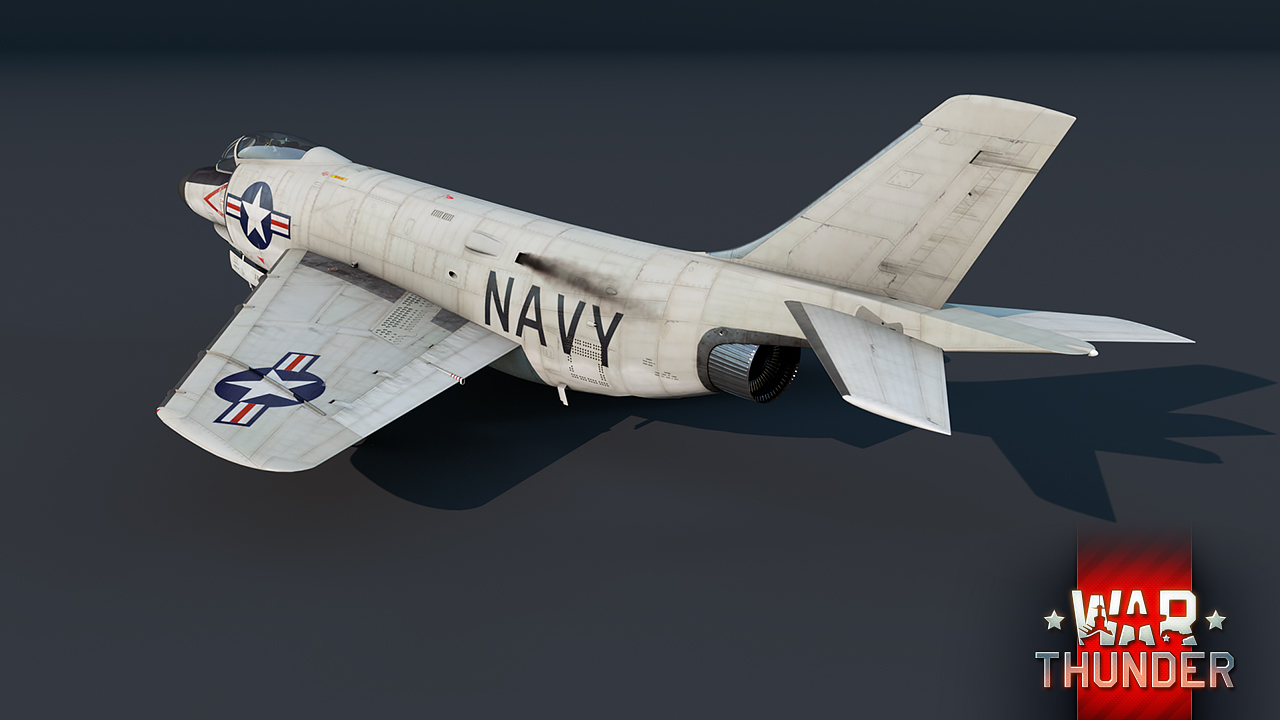 In War Thunder, the F3H-2 Demon will be one of the exciting new additions awaiting seasoned pilots in the upcoming update. Coming to Rank VI of the American aviation tree, the F3H-2 will further enrich the top ranking US jet lineup with another versatile fighter aircraft, excelling at dogfights in particular, but also sparking a sense of unease with tankers in its presence.

However, the F3H-2 remains a subsonic jet fighter. While the aircraft excels at subsonic dogfights, future pilots of this machine shouldn’t waste time trying to chase faster opponents, but catch these faster opponents off guard - ideally while they’re distracted or in a low energy situation at low altitude.

Fun Fact: The F3H Demon possessed excellent cockpit visibility, earning itself the nickname ‘The Chair’ by its pilots.

Being a fighter aircraft, the F3H Demon is more than adequately armed to deal with any opponent it may meet in the skies. Rocking a primary arsenal consisting of four 20mm Colt Mk.12 cannons with a total ammunition complement of 760 rounds, a single well aimed burst from these deadly weapons is enough to shred an airframe to pieces. Furthermore, what happens to be outside of the cannons’ range is more than fair game for the four air-to-air missiles carried by the Demon.

Despite being primarily a fighter aircraft however, Demon pilots won’t need to shy away from assisting their comrades in arms on the ground with some close air support. Being able to carry a selection of unguided rockets and bombs of up to 3,500 lbs (the biggest one is 3,000 lbs M118 Demolition), the F3H-2 is more than capable of raining down death and destruction upon its enemies on the ground.

The F3H-2 Demon is well on its way to joining the fight in War Thunder with the upcoming update  and will become available to all pilots as a new Rank VI American jet fighter. Until then, keep a close watch on the horizon for more news regarding the next major update coming to the game in the near future. Safe flying and happy hunting pilots!

Commenting is no longer available for this news
Rules
KingDragunov
92

Why US keep getting top vehicles they have enough....Nice jet though but cmon

Now watch Japan not get a single vehicle again

While these aren't top tier vehicles (this is yet another 8.7 if I had to guess), there are other nations that need love. Though I am completely behind them filling up the trees before powercreeping onward again, as long as all nations get the same treatment *cough Su-7 please cough*

San4311, Not really sure that it's Jacques who needs love the most, unlike France or Italy

In before that Dozer guy begs for the Mirage.

When has politely asking a question ever been taken as begging?

Dozer15, Stop asking for it, you'll only get an answer when we get a devblog (or not), now you're just making every Mirage fan look bad.

viciceman, Yeah there's like one guy asking for it and 15 comments talking about him haha

thats not true, most player want it, there is just a very loud but minor part of the community getting trigger from a couple of comment that don't want it ... Stop thinking that you represent the community

Trotrodor, he is NOT saying he doesnt want the mirage, he is just saying that the people spamming every damn devblog with "gaijin where is the mirage" "gaijin give us mirage already" "gaijin wtf still no mirage" is annoying af and i totally agree with it. its gonna be a nice addition when it arrives but these people dont have to spam it underneith EVERY SINGLE GAIJIN POST! they got it ffs

There is a lot more coming and not just for USA. We have only just started blogs and have a lot more surprises in store across the board for many nations.

Smin1080p, Do any of those surprises have a french air force roundel on them?

A very nice addition to the US tech tree... which absolutely didn't need it. At all...

Pretty much every vehicle has a for / against argument in someone's opinion. Be it WW2 / Modern or for this nation or that nation. But really there is no need to debate as pretty much everyone has something cool to look forward too this update. We have only just begun showing whats In store.

Smin1080p, "everyone has something cool to look forward too this update" We will see.

There are a lot of interestiung US planes that need to be added. The F3H is one of them. Oh and btw MaggyYolokrau, most of the future italian planes are gonna be american copycats, so you best pray for the US to get some love, or Italy wont neither

PilotCloaker, Yeah, the only aircraft I can think of that Italy could get are the Sagittario II, the Ariete, and the G.80 and G.82. All of these have little amounts of flight data though, so I don't keep my hopes up.

I'll say it then. Mama mia!

Hooray! What an Awesome addition for the USA! Ok. Are the French going to get the Mirage this update? Yes or No?

Smin1080p, Many thanks for making a statement about these individuals.

XXIunoToBR, as you see dozer and the Mirage boys are calm and polite while the fools are very foul and dumb