Trento: Playing by the Book

Trento is the lead ship of the first Italian class of so-called ‘Treaty Cruisers’, constructed for the Regia Marina in the mid 1920’s. Docking soon in player ports, Trento will round off the highly anticipated research tree of the Regia Marina as the top Italian warship awaiting captains in the War Thunder major update!

Briefly: An early 1920’s Italian cruiser design, boasting excellent firepower and mobility at the expense of protection and survivability.

In the early 1920’s, with the signing of the Washington Naval Treaty, Italian shipbuilders began studying the possibilities of developing a new cruiser design that would match the restrictions imposed by the agreement. From the onset, it was clear that sacrifices in some aspects would need to be made in order to stay within the 10,000 ton treaty displacement limit.

As a result, Italian shipbuilders decided to focus on speed and firepower, while keeping protection light in order to conserve weight. In the end, a design was presented which promised a top speed of around 35 knots, armed with four dual 8’’ turrets and only slightly exceeding treaty limitations. Despite having their reservations about the design, the Regia Marina ordered two ships to be built in the mid 1920’s - Trento and Trieste - thus forming the Trento-class of heavy cruisers. Still not fully convinced however, the Regia Marina would subsequently place orders for a more balanced heavy cruiser design, later becoming the Zara-class cruisers, but that’s perhaps a story for another devblog.

Trento itself, named after a city in the northern regions of Italy, was laid down in February of 1925, being launched in October 1927 and finally entering service with the Regia Marina in April 1929. In the interwar period, Trento undertook a tour of South American countries, protected Italian nationals during the Chinese Civil War and ferried Italian volunteers from the Spanish Civil War back to Italy in 1938.

During WWII, Trento and Trieste took part in numerous actions in the Mediterranean theatre, frequently clashing with detachments of the Royal Navy. Most notably, Trento took part in the battles of Calabria, Cape Spartivento and Cape Matapan from 1940 to 1941. In 1942 however, during an Italian counter in the Allied Operation Harpoon, Trento sustained torpedo hits from a British torpedo bomber as well as a submarine. The resulting magazine detonation caused by the second torpedo hit led to the warship sinking below the waves in a matter of minutes. Trento was formally struck from the Italian naval register in the immediate postwar period in 1946. 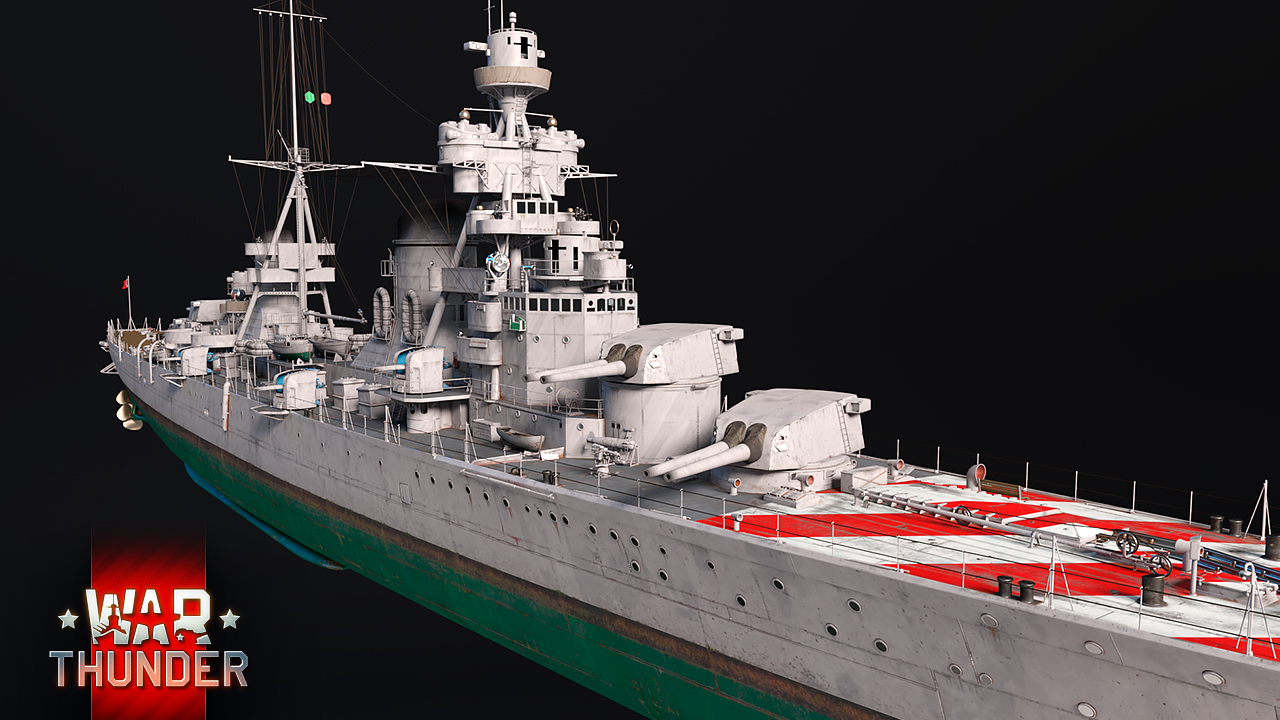 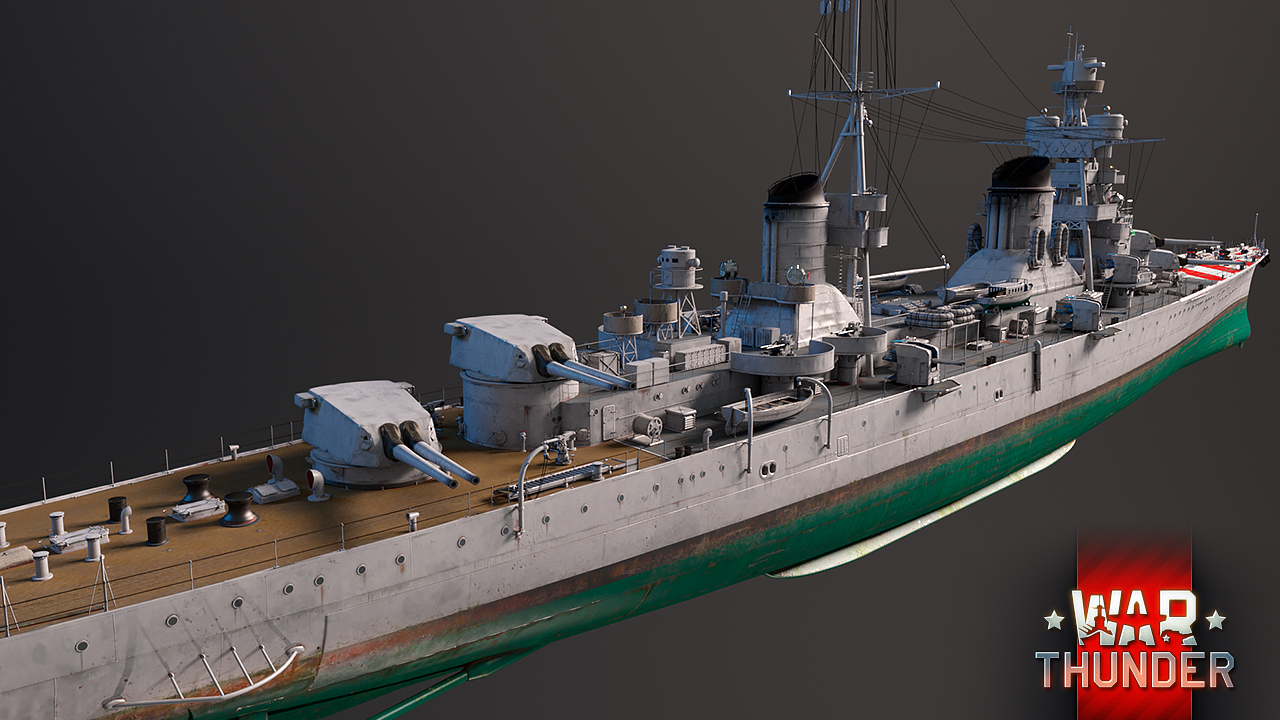 While Trento boasts respectable firepower, its armor protection strikes a different tone. Namely, being a so-called ‘treaty cruiser’, Italian shipbuilders were required to keep the ship’s displacement as low as possible in order to maximize firepower and mobility. As a result, Trento only received a modest 70mm of armor in the construction of its armored belt, while the conning tower is encased in 100mm of steel plating. The ship’s comparably light protection in addition to only having a crew complement of 723 sailors makes the Trento ill-suited for leading its allies into battle. Instead, captains are better off utilizing the ship’s excellent firepower and mobility to attempt outflanking their opponents.

Having touched on the subject of mobility - this is one area in which Trento, like many Italian vessels, truly excels at. Being powered by a 150,000 horsepower propulsion system, Trento is able to achieve a top speed of 35 knots (64.8 km/h), while its long and sleek hull gives it good levels of agility during maneuvers. Effectively, Trento captains will need to rely on the ship’s mobility in order to prevent enemy fire from hitting its mark.

Trento will arrive in War Thunder naval battles as part of the Italian naval tree with the release of the major update, coming very soon. In the meantime, be sure to keep scanning the horizon as we release more news and information regarding the next major update. Until then, calm seas and happy hunting captains!

Commenting is no longer available for this news
Rules
Salty_French_Boi
65

And they won't stop asking for it even after a mod replies to all their demands. Probably incredibly annoying for them.

*blbobobobo, They cannot answer to these questions tho

Awesome Boat! Ok. Are we getting the Mirage this update? Yes or No?

Fuhrerius_HANZzZ, i do like seeing this, no one forces you to read anything afterall, if you're mad about people wanting things that should have been in game for months then it's your problem

Hope the Mirage will be delayed!

I love Italian Ship Design, can't wait for the Roma at some point in the far far future.

I_Am_Bob224, hmm, looking at how Gaijn does naval, she'll be added when either America or Germany have something that will make her irrelevant

SAM for japan this update?

Hahaha good joke, adding something usefull for japan? Nope, but hey japan navy is getting more love than ground even tho bearly any one is playing it

Kamil_ja_, mate stfu we still need the French Navy ok :P lots of love those of us who can see into the future! note ive only been whinging about the French and Italian Navies for the last 4 years

Pushed back another update everytime someone asks. You guys keep scaring it off :(

Fire____, probably will come when active protection uodate will be introduced