The Type 93 is a Japanese 1990’s wheeled SAM vehicle, developed for the JGSDF as a modern replacement for conventional gunned SPAA units. Coming soon to War Thunder with update Starfighter, the Type 93 will reinforce the top ranks of the Japanese ground tree and provide lethal anti-air cover for its allies on the ground!

Development on the Type 93 mobile SAM platform began in 1990 after the Japanese Department of Defense tasked the Toshiba Heavy Industries company with modifying the already in service military version of the Toyota Mega Cruiser (designated BXD10) to carry the Type 91 surface-to-air missiles with the aim of creating a contemporary replacement for conventional gun-armed SPAA units.

Given how all necessary components were already more or less readily available, the actual development time for the new vehicle was fairly short. As a result, shortly after the order was issued in 1990, a prototype of the Type 93 was built and underwent successful testing. In 1993, the vehicle was officially accepted into service with the JGSDF and mass production commenced. In total, 113 Type 93s were built between 1993 - 2008, with all produced units serving exclusively with the JGSDF even until this day. 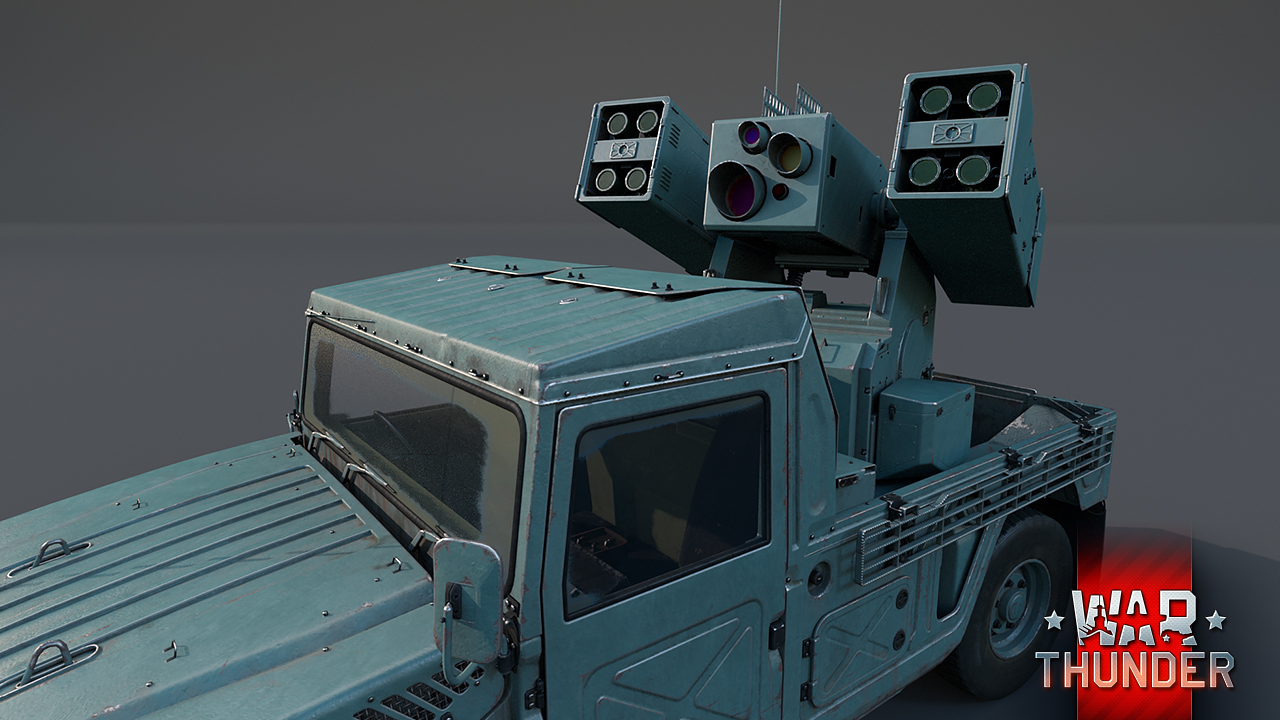 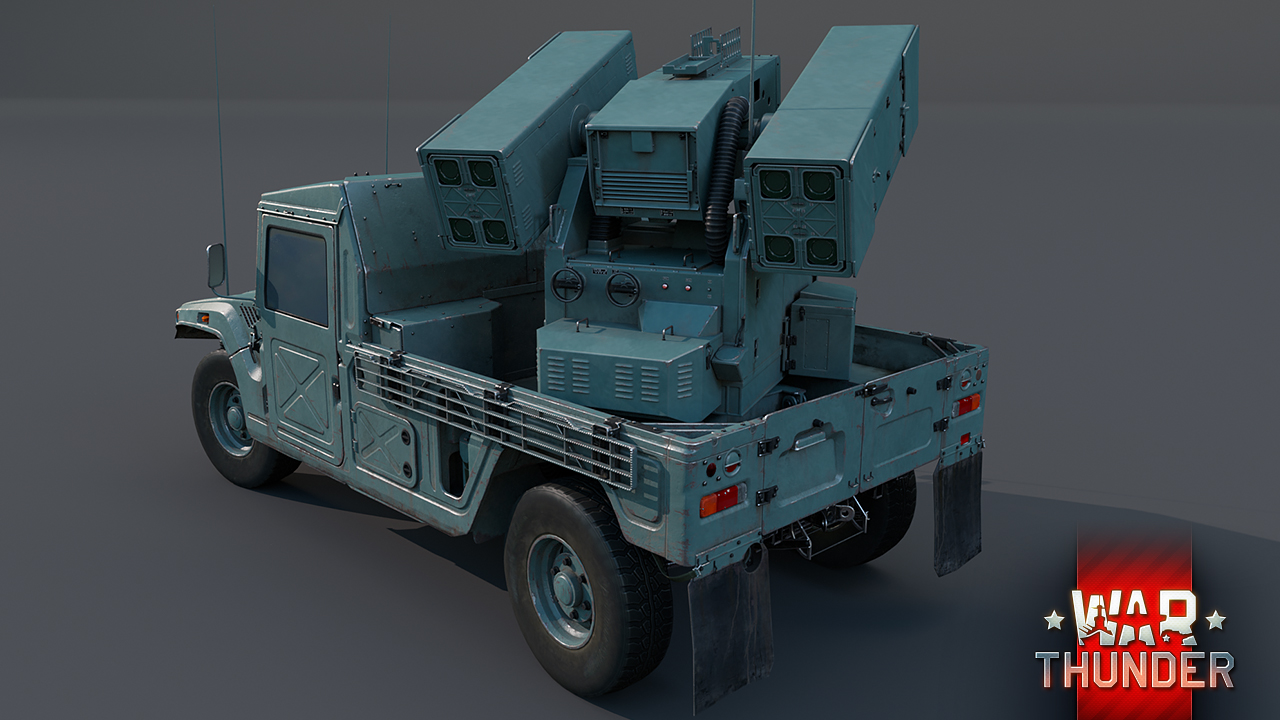 In War Thunder, the Type 93, apart from being a deadly Japanese 610mm torpedo in naval battles, will now also take on the form of a no less lethal surface-to-air missile platform in ground battles, following the release of the upcoming update. Although SAM vehicles have been a part of War Thunder ground battles for some time now, Japanese tankers had to wait a little longer before getting their hands on such advanced tech, but the Type 93 now aims to make this wait worthwhile!

The Type 93 can be considered a prime example of a so-called ‘one-trick-pony’. Armed solely with an 8-barreled SAM launcher, firing Type 91 IR-guided missiles, the Type 93’s one and only task on the battlefield is to keep the skies clear of any unwanted aerial intruders.

Fortunately, this task is made rather simple thanks to the Type 91 missiles. Being able to take down targets within a 5 km range and accelerating up to speeds close to twice that of sound during flight, the Type 91 SAMs are more than effective means of dealing with pesky helicopters or fast moving aircraft. If their high speed didn’t make the Type 91 missiles dangerous enough, these missiles have another trick up their sleeve that makes them even more formidable. Namely, the Type 91s aren’t easily fooled by countermeasures, allowing them to more consistently score killing blows against aerial targets, even those with more advanced countermeasures, including flares.

However, while the Type 93 excels at countering aerial targets, its effectiveness against ground targets is extremely limited. Not only does the Type 93 not have access to any other weaponry, but its missiles require a lock in order to be fired - something that can only be achieved on aerial targets.

Furthermore, the Type 93 is only lightly armored and thus capable of deflecting just rifle caliber fire as well as shrapnel. Cannon fire as well attack from aircraft is bound to make short work of the Type 93 and its two-man crew.

On a different note, weighing in at just 2.6 tons and being powered by a 150 horsepower diesel engine, the Type 93 offers its aspiring commanders unparalleled mobility, being able to achieve a top speed of 125 km/h on paved roads. As a result, the Type 93 will become the new record holder for being the fastest ground vehicle in War Thunder upon its arrival to the game with the next major update Starfighters!

Commenting is no longer available for this news
Rules
I_NAMELESS_I
30

As i said before please consider of giving this vehicle scout and repair abilities so it has more use since it can not do any harm to the enemy tean, which is probably the first of its kind. So it should be made as a support vehicle where while no aircraft is around you can spot enemies and repair for your teammates so anyone who play this car won't be feeling limited to what they can do.

Agree SPAAs should be atleast able to repair friendly tanks. But scouting abilities, i think only certain SPAAs should have it, just like some TDs.

nice truck they have there, but are we getting new top tier br at 11 this update? yes or no?

WreckingAres283, Yeah, but the SIDAM has guns, and can shoot things on the ground. This thing is literally useless beyond its speed. (Also 5km doesn't mean you actually get 5km of range. It only has 3km all aspect (Like the mistral), and helicopters have low heat signatures/ECM/flares, meaning you are effectively useless against them. You could probably sit 2km away and not worry in a HIND of all things.)

Unfortunate that this is completely useless against ground. Hopefully, though, it is good enough to give Japan an at least decent anti aircraft vehicle. At least it will be fast and full of memes... Also, I must have missed the dev feedback window the other day, but, are there plans to improve carriers this update?

Stona_WT, So is is zsd 63 and r3, but you put both of them lower br because it doesn't have armor and a lot of pen against ground vehichles

AA should be AA. Cant change my mind.

Jakob_Norz, Then at least give Japan a good AA. But unfortunately this is the only AA in the entire game that can't do **anything** to ground vehicles. It's also ironically the worst SAM in the game. You'd be better off with a wirbel.

Sckod, It can be written Déjà vu with no -

Not in this update.

Hooray! What an Awesome addition for the Japan! Ok. Are the Soviets going to get the Su-7BKL this update? Yes or No?

Soviets are getting the Su-7B this update.

Smin1080p, Once again this doesn't answer my question.

They're getting the Su-7B and that's it.

F7U1Cutlass, You don't know that

I don't see Toyota mentioned in the Site's legal information. Are you sure you can do this?

If you read whole Legal subpage, you should also notice this one bit: "For all legal matters, please contact us at legal(at)gaijin.net." ;)

Stona_WT, I am just surprised not to see the brand being listed alongside all the other manufacturers. Lately, Toyota has been very strict for what concerns its image in videogames - and up to now it's only relatable to Gran Turismo Serie. I am sure nothing would happen but, just be certain you can include a copyrighted brand before it can strike the game :/

Toyota be like: no you can't use our vehicles in your ga.....it can drift? k it's fine

why do you want it? the t80u is better t72b is very similar and so is the t80b. how many times do you want to respawn in top tier? france still only has the leclerc and maybe the amx 40 and most other nations only 2 top mbt's why does gaijin need to waste time making a t90? make new gamemodes fix existing game breaking bugs and flesh out other nations tech trees

OddBall_1, LMAO do you know anything about real life tanks ?