Attilio Regolo is the lead ship of the Capitani Romani-class light cruisers, built for the Regia Marina in the late stages of World War II. Arriving in War Thunder naval forces as part of the incoming major update, Attilio Regolo will be the first cruiser vessel awaiting eager captains in the upcoming Italian naval tree!

Note: Those who have purchased relevant early access packs will have instant access to the Italian Naval Tech Tree CBT in the upcoming major update.

During the 1930’s, the Regia Marina was looking into building a type of ‘ocean scout’ vessel. Initially, the design work took inspiration from the Condottieri-class cruisers, but was soon abandoned in favor of a more compact and modern design. By the end of the decade however, the need for ‘scout’ vessels became somewhat redundant thanks to the advances in aviation and radar technology. As a result, the design was reclassified as a light cruiser and would serve as a flotilla leader.

Plans were made for the construction of 12 vessels of the ‘Capitani Romani’ class of light cruisers, all of which were laid down in various Italian shipyards in September and October of 1939. However, only three ships of the class would actually see completion while the others either had their construction cancelled or were later on captured in drydock by German forces.

One of the ships which did see completion is the Attilio Regolo, which entered service with the Regia Marina in May 1942. However, the ship’s didn’t see extensive service not only due to joining the war late, but also because it was hit by a torpedo from British submarine HMS Unruffled in November of the same year, getting severely crippled. 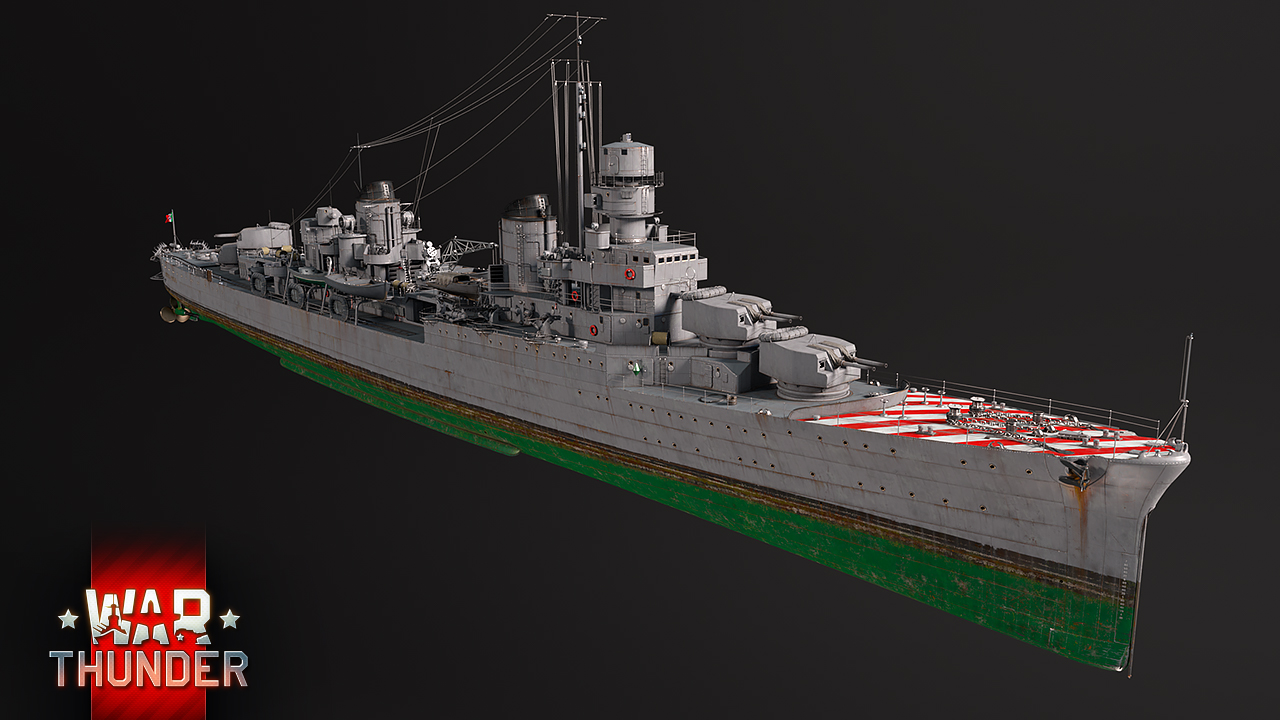 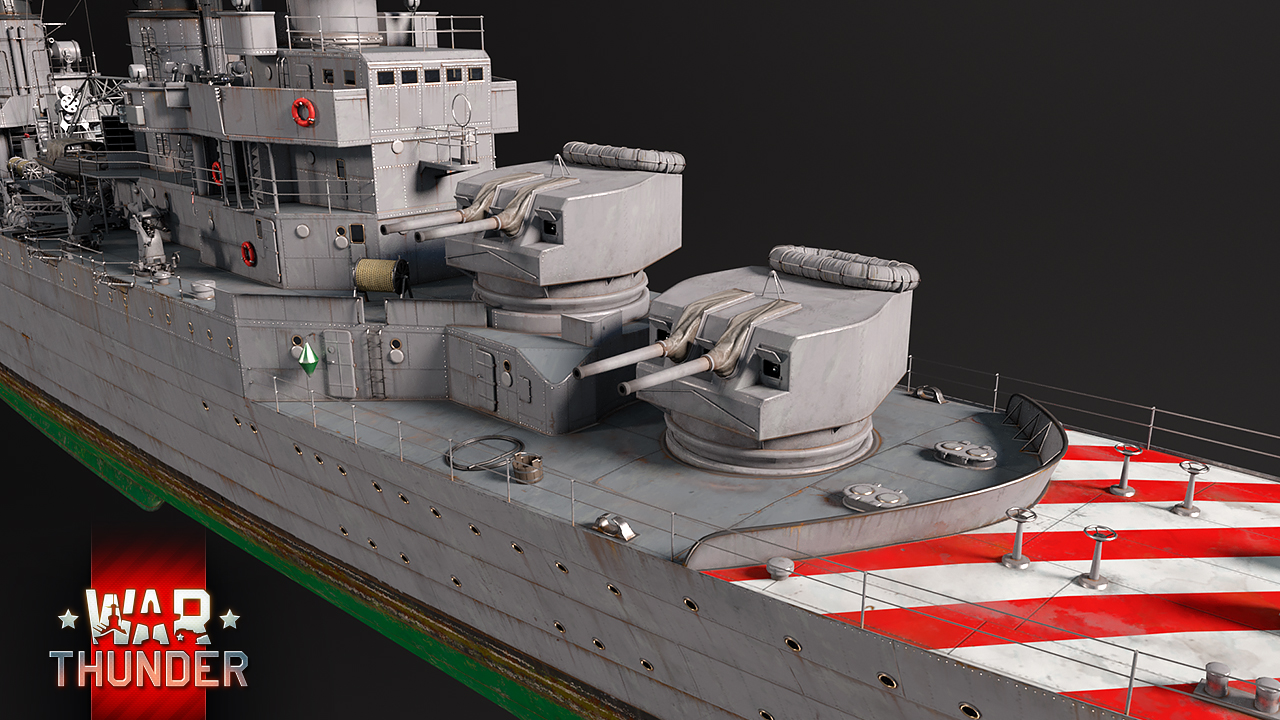 In War Thunder, Attilio Regolo is coming to naval forces as part of the upcoming Italian naval tree, arriving to the game with the release of the next update. Being the first light cruiser captains will unlock in the Regia Marina tree, Attilio Regolo stands out from other light cruisers in the game by being distinctly uncrusier-like when it comes to its general characteristics.

For starters, Attilio Regolo is armed with eight 135mm cannons, split between four twin turrets with two superfiring turrets being found on either end of the ship. Unlike the usual 152mm cannons found on most other light cruisers, Attilio Regolo’s guns may be smaller in calibre but make up for this by possessing a higher rate of fire and very good ballistic properties. As such, Attilio Regolo is ideally suited to take on destroyers, while also being able to help its allies take down larger vessels by providing effective supporting fire.

Furthermore, Attilio Regolo is also armed with eight single 37mm and four dual 20mm cannons, comprising its anti-aircraft complement. However, these will likely find good use in engaging smaller surface vessels too - an opponent which the ship may frequently confront in battle. In addition, the ship also comes fitted with two quadruple 533mm torpedo launchers, possessing good firing angles to both sides of the ship, and 4 spare torpedoes for the bow torpedo launcher.

Fun Fact: As all ships of the Capitani Romani class, Attilio Regolo was named after a Roman general. In this case, one who served during the First Punic War.

While Attilio Regolo is without a doubt well equipped to deal with a number of different threats it may encounter on the battlefield, the ship itself can be considered anything but well protected. In fact, Attilio Regolo does not possess any belt armor, with its only protected parts being the turrets and the bridge with up to 20 and 15 mm of armor plating, respectively. In addition, Attilio Regolo’s complement size of 420 sailors is also on the lower end of the spectrum when pitted against similar vessels of other nations.

However, aspiring captains of the Attilio Regolo won’t be relying on armor to keep them out of harm’s way during a battle anyways. This is not only due to the fact that the ship virtually possesses no armor, but also because of the ship’s excellent mobility. Namely, generating 110,000 hp, Attilio Regolo’s engines can propel the ship up to a top speed of 39 knots (~70 km/h), thus allowing captains to quickly maneuver around on the battlefield to outflank their opponents or dodge incoming fire.

Attilio Regolo is docking in player ports with the arrival of the much anticipated Italian naval tree in the upcoming War Thunder update. In the meantime, be sure to keep a close watch on the news for more information about the next major update coming to the game very soon. Until then, calm seas and happy hunting captains!

Commenting is no longer available for this news
Rules
Norfangl
19

A pointless ship tbh. Fix the ship BR's. A unarmoured cruiser with 135mm guns vs a German pocket battleship that can one shot just about everything. 10/10 balance.

did you check the forum? USS texas is considered. Just hold on my friend

Dimitri_Rudov, how is a battleship helping compression issues of light cruisers?

You really were sweating what to write as positive on this ship, weren't you? )))

39 knots is quite rapido on a cruiser tho and it sure does look purty.

Scarper, Speed is not really a redeeming factor that can be utilised in any meaningful sense in Naval. A few more knots of speed does not save you from being "bad" in every single other way. 10 seconds of reload Aced, pitiful shells. Yeah, BR 5.0 material there.

Yet more food for the Germans. Gaijin you really need to sort out Naval mm and all the other issues or else this will just be dead on arrival.

It’s gonna get absolutely dunked on. Literally the only good thing about the ship is the mobility but that doesn’t even matter in Naval currently cause it’s just gonna get one-shot by everything. Gaijin thinks flanking is a strategy in Naval: this makes it clear none of them have ever even played it.

blbobobo, This thing should be 4.7

These ships are pointless, you destroyed naval gameplay last patch by giving every HE shell a RNG chance to start fires regardless of where it hit. Then you insist on modeling a bunch of riverboats few want to play for almost half the tree, the ships that made it in aren't competitive with anything at their BRs. The basic design of naval is solid but you destroy it with crazy and unrealistic choices.

That's your own bias talking. Sure there are some that aren't great, but not every vehicle can be. Personally, I much prefer those "river boats" over anything that would be classed as a real ship

the Destroyers Porter, Somers, Akizuki all have 4 turrets 8 guns of roughly close to same mm and are 4.7 BR and the Russian light cruiser Krasny Kryn is BR 5.0 and had 15 guns almost double what this meatball has, this is a BR 4.7 at best. Do the right thing Gaijin and place its BR to 4.7... I will use it even at 5.0 but i will resent you guys more for it if i have too, i already have the premium destroyer that i really hope is 4.3 or 4.0 like all the other nations with 5 guns

Same with Kuma/Sendai they need to be br4.7, they are just to weak to face against an uptier to 5.7, hell even a 1v1 agains most of the br4.7 DDs will leave these 3 cruisers badly damaged (plus this thing will probably get ammo racked a lot). And having good speed is no redeeming feature; yes, you can dodge a salvo from a spee if you see it comming, but plenty DDs CLs and CAs just nullify that option by sheer force of firerate, you just cant dodge them all.