The Mirage IIIC is the first production version of one of the most famous French jet fighter families of the Cold War. Representing the bleeding edge of aviation technology at the time, the highly anticipated Mirage IIIC is finally arriving in War Thunder with the major update, becoming the new crowning jewel of the French aviation tree!

In 1952, the French government issued a specification for a lightweight, all-weather jet fighter capable of reaching supersonic speeds. Three French aircraft manufacturers responded to the call, designing new aircraft to meet the given specifications. Among them was Dassault Aviation which came up with the MD.550 Delta - a single engine delta wing design with a large vertical stabilizer and provisions for an additional propulsion system in the form of a rocket engine.

The MD.550 Delta prototype first took to the skies in June 1954. After having its flight data evaluated, the design underwent some changes and received the official name Mirage I. Subsequent test flights of the redesigned prototype showed improvements in flight performance, but Dassault quickly came to the conclusion that the aircraft was too small and light to meet the required ordnance-carrying capabilities and as such the prototype was eventually scrapped.

However, Dassault didn’t want to give up on the design. Instead, the company continued developing the aircraft, quickly coming up with an enlarged and more powerful version called Mirage II. With the advent of more powerful versions of the SNECMA Atar engines in the late 1950s, the Mirage II concept was abandoned before it even left the drawing board and Dassault immediately began working on an even larger version of the aircraft around the new engines. The result of this undertaking was the creation of the Mirage III.

By this time, the aircraft had also caught the attention of the French Air Force, which motivated Dassault to proceed with further development. In November 1956, the Mirage III first took to the skies, and after a number of subsequent test flights, an order for 10 pre-production machines, designated Mirage IIIA, was issued by the French Air Force.

Following positive experiences with the pre-production machines, the military placed a further order for 95 machines of the first production version, designated Mirage IIIC. This version of the Mirage first flew in October 1960 and entered official service in 1961, remaining in service with French units until the late 1980s.

Apart from French service, the Mirage IIIC also saw extensive use with the Israeli Air Force during the Six Day War as well as the Yom Kippur War of the late 1960s and early 1970s. Some of the Israeli Mirages were later on sold to Argentina, which in turn used its Mirages in the Falklands War of the 1980s. 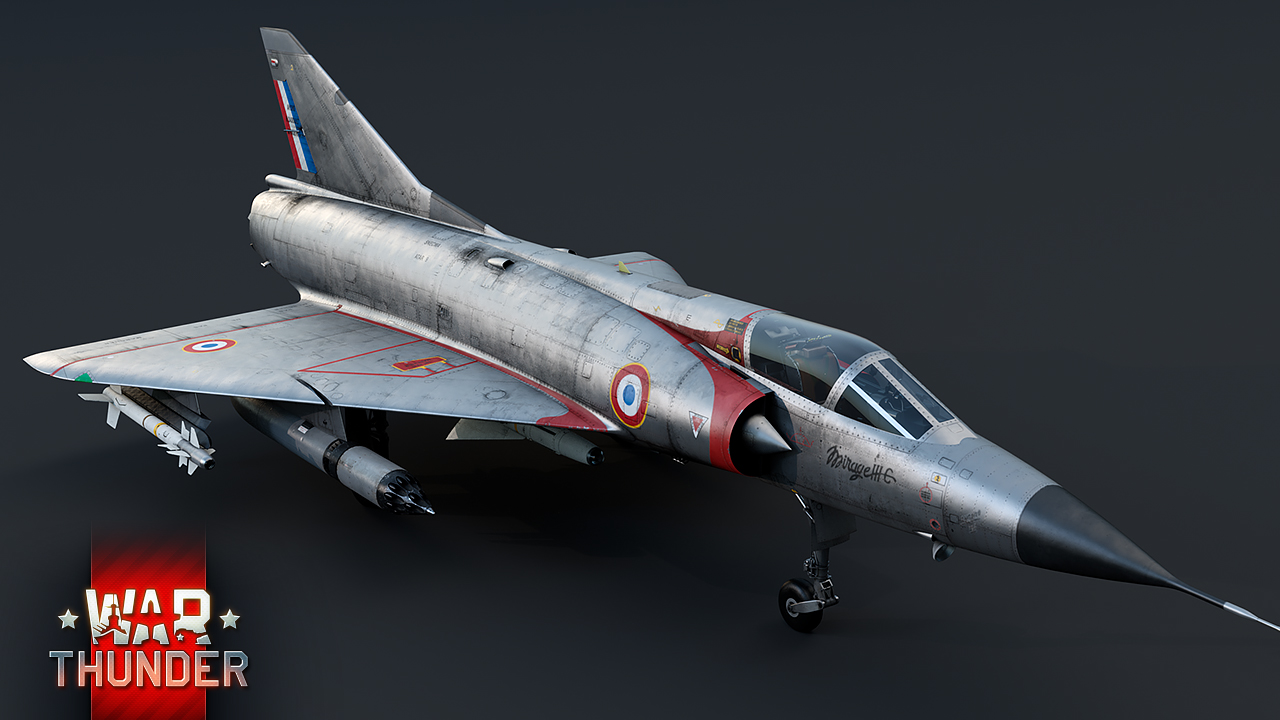 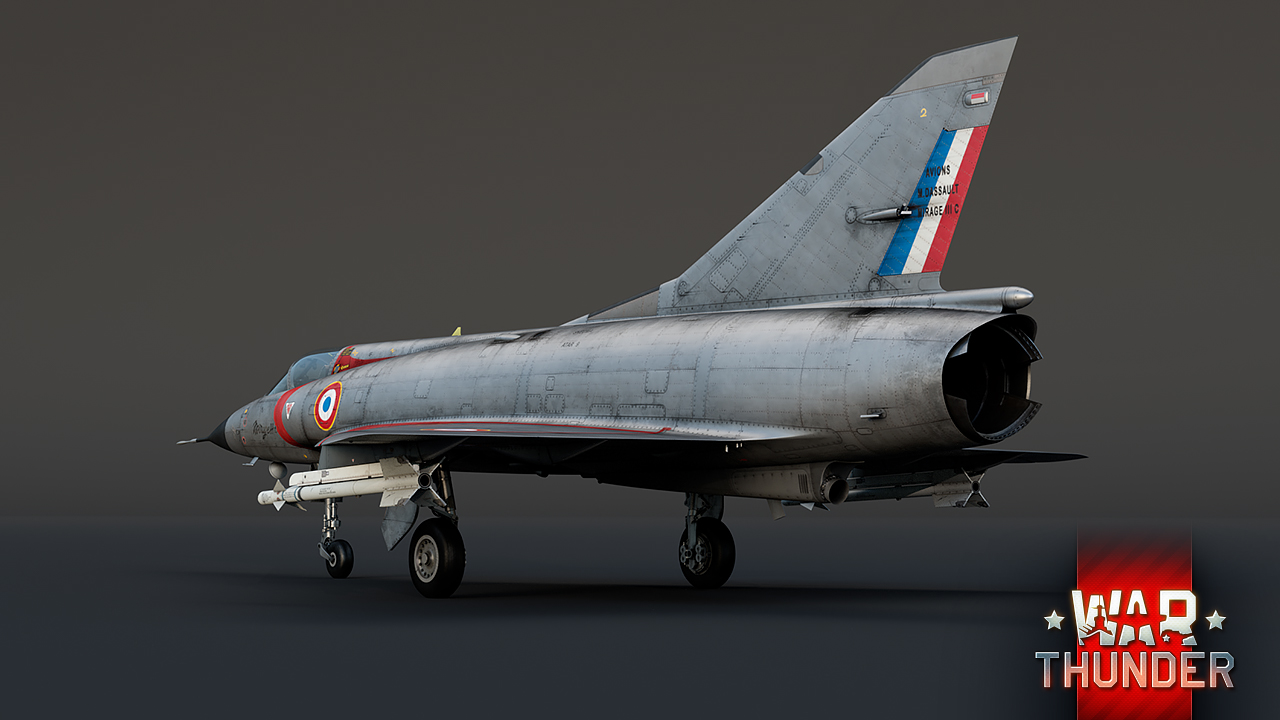 The highly anticipated and long awaited Mirage IIIC will finally be arriving in War Thunder with the release of the upcoming update. Thanks to a combination of its excellent flight performance, owed to its delta wing design and powerful engine, as well as a vast assortment of missile armament, the Mirage IIIC will rightfully take its place at the top of the French aviation tree, following its introduction to the game as part of the next major update!

The Mirage IIIC, although a visually stunning aircraft, wouldn’t be worth more than its scrap value would it not be for its extremely powerful SNECMA Atar 9B turbojet engine. Capable of generating 6,000 kgf (58.8 kN) of thrust, the Atar 9B allows the Mirage IIIC to reach a top speed of 2,112 km/h (Mach 2) at an altitude of 15,000 m.

Furthermore, the Mirage IIIC has an additional ace up its sleeve which not many aircraft in the game possess - a secondary propulsion system in the form of the SEPR 844 rocket engine, mounted underneath the tail section. When mounted, this rocket pod generates an additional 1,500 kgf of thrust for its 80s long run time, allowing the aircraft to achieve higher acceleration rates for a brief period of time.

However, as already mentioned, this rocket pod isn’t an integral part of the aircraft. Instead, it comes (or doesn’t come) fitted to the aircraft depending on the weapon loadout chosen by pilots. Specifically, the rocket booster only comes equipped when pilots choose an ‘interceptor’ loadout, i.e. a loadout containing the Matra R530 IR-guided AAM as well as other air-to-air missiles. On the other hand, the rocket booster will not be available on loadouts more centered around ground attack as well as on loadouts which max out the aircrafts payload.

Fun Fact: In 1958, the Mirage III became the first European aircraft to exceed speeds of Mach 2 in level flight.

Having already briefly touched on the subject of the Mirage IIIC’s weaponry above, we may as well go into some more details now. Upon unlocking the Mirage IIIC, pilots will find an aircraft whose default armament consists of two 30mm DEFA cannons with an ammunition complement of just 125 rounds per barrel. As a result of the DEFAs high rate of fire, pilots will be able to empty the Mirage’s ammunition in under 6 seconds of continuous fire. In other words, conserving ammunition and just shooting off bite-sized bursts at the enemy during an intense dogfight is of paramount importance unless you want to run dry at the most inconvenient of times.

However, the Mirage’s limited ammunition is more than amply compensated by the fact that the aircraft can carry a vast array of secondary weapons, most notably a variety of AAMs, including the new to the game R550 Magic. Furthermore, 68mm SNEB unguided rockets, bombs of 250 and 400 kg calibers as well as the AS.30 AGM can be mounted on the aircraft to give it more versatility in combat, especially in combined battles.

The Mirage IIIC is coming to War Thunder with the upcoming major update and will await all eager pilots as the new crowning jewel of the French aviation tree. In the meantime, make sure to stay tuned to the news as we continue to showcase some of the new additions coming to the game with the next major update. Until then, clear skies pilots!

Skink when? Yes or no?

WhEn Is MiRaGe CoMiNg

Borisych, u killing me hahahaha

Does this mean the Mirage is coming next patch? Yes or no question.

No, you've just been pranked. May fools

No its not coming, ask more and it will still not come.

At this point dozer became a meme among devblog comment sections

LegionaryRomania, Only because, now that the Mirage is here, people won't shut up about him. It's the new annoyance.

I am very happy it is here.

That's a nice Mirage for France! Ok. Are we going to see the Mirage this Update? Yes or No?

attempt #587 is mirage coming this update yes or no?

If we said no at this point we would be declaring a war.

This was a mistake. This should have never been considered in order to teach the cry babies a lesson, that whining does not get you whatever you want.

This vehicle was in development for months long before anyone started "crying" about it. Im not sure why some people think we can suddenly snap up a model in a matter of days/weeks just because a few people started asking for it.

Smin1080p, yes, the mirage is cool and everthig you want, but when we could have nice maps and modality where to use it? we are now flying top jets in a 5km square maps where you take off and you are in the battle, you can nevere climb, never go fast never use your speed as it should be used and we have always "mixed" that sucks, i don't want fight with my mig21 another mig21 i want real nation squads, in this moment top tier jets are horrible all mixed all vs all in a thiny little map

Ha, if Gaijin had refused to implement vehicles people whined about, there wouldn't be half of the top tier vehicles there are in this game.

Arghail, top tier was a mistake, so win-win