The Scimitar is a late 1950’s subsonic twin engine naval jet strike fighter, developed by the renowned British Supermarine aircraft manufacturer. Soon, pilots in War Thunder will have the chance to take control of the Scimitar F.1, joining the ranks of the British aviation tree in the upcoming major update

Development of what would eventually turn out to be the Supermarine Scimitar began as early as the late 1940’s, with the Supermarine company starting work on developing an undercarriage-less naval jet fighter, following a specification issued previously by the Admiralty.

During development, several prototypes were built and tested while at the same time the design of the machine continued to change and evolve. Eventually, however, the undercarriage-less concept was dropped and the machine was even reclassified to a low altitude strike aircraft, with the Royal Navy ordering 100 units of the latest prototype design - the Type 544 - into production in 1954. The Type 544 prototype first flew in January 1956, while the first production version of the Scimitar ran off the assembly line a year later in 1957.

The Scimitar entered service with the Fleet Air Arm in 1957. However, the carriers of the Royal Navy at the time were rather small while the Scimitar was a relatively large aircraft resulting in high accident rates which would plague the Scimitar’s service career. Furthermore, the Scimitar was a highly demanding aircraft from a maintenance standpoint, making it even less popular with its crews.

As a result, the Supermarine Scimitar only had a relatively short service career with the FAA, which withdrew the Scimitar from active service in 1966. From that point, the Scimitar was relegated to training units and continued being used as a training aircraft until 1970 before being ultimately decommissioned from active service. In total, 76 Scimitars were built during their limited production run, of which 39 were lost on account of various accidents. 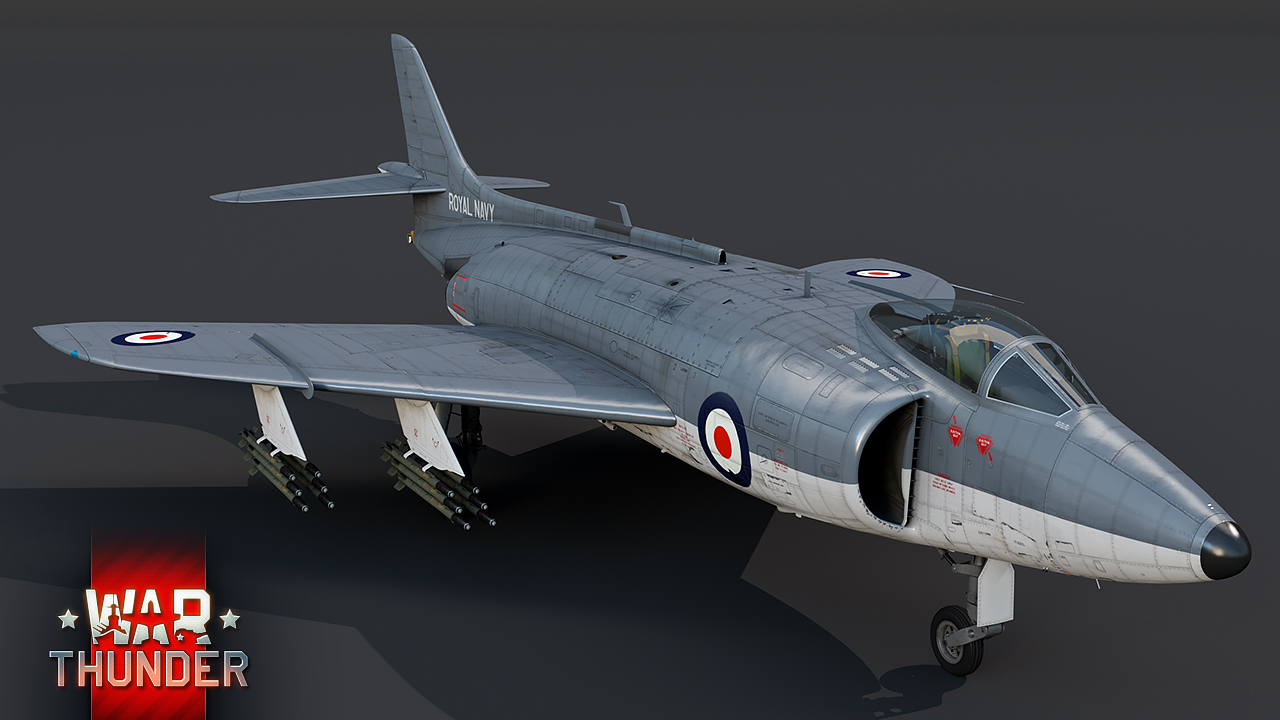 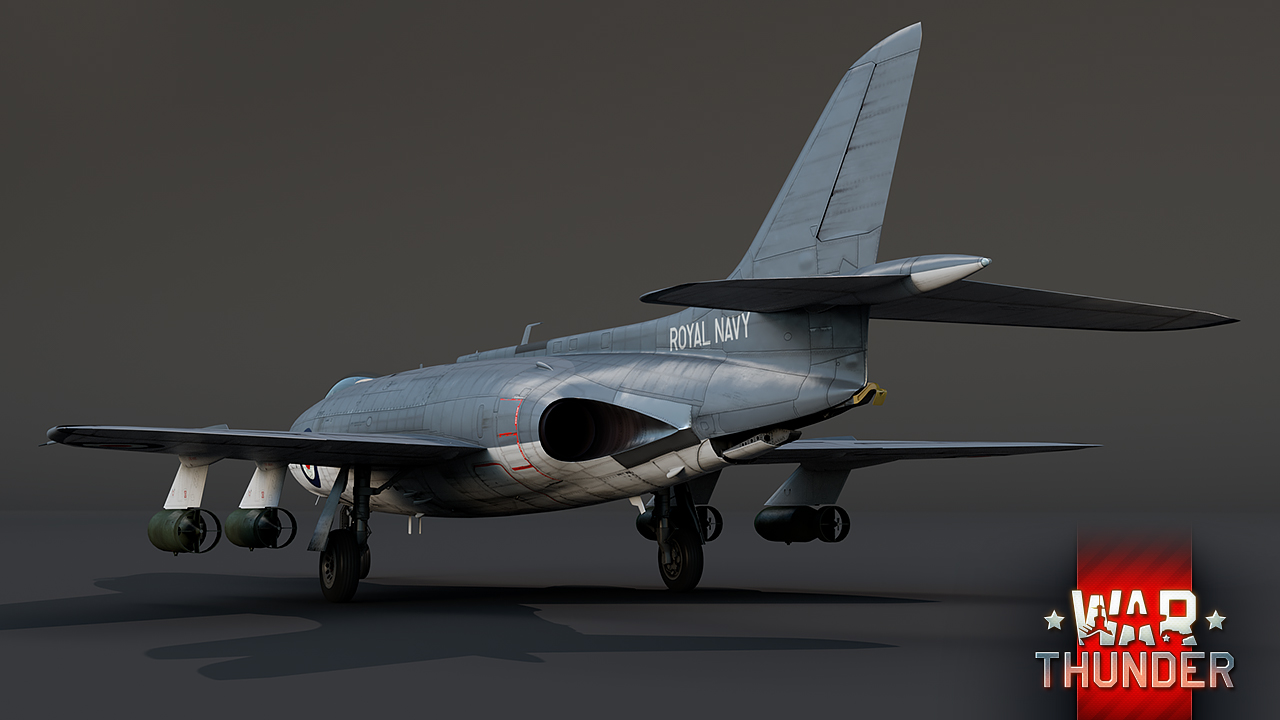 In War Thunder, the Supermarine Scimitar F.1 will be a new jet fighter awaiting pilots at rank VI of the British aviation tree in the upcoming update major. Although historically speaking, the Supermarine Scimitar F.1 has a less than stellar service record owed mainly due to high maintenance requirements and numerous accidents, these problems are something that War Thunder pilots won’t be affected by in-game and they’ll have the chance to fully take advantage of the Scimitar’s excellent flight characteristics and combat versatility!

Before we dive into all the things carried by the Scimitar that can go boom and make others go boom as well, it’s certainly worth talking about the Scimitar F.1 itself first. Namely, the heart and soul of the Scimitar F.1 is represented by its two Rolls-Royce Avon 202 turbojet engines. Generating an impressive 11,150 lbf (5,057 kgf) each, the Avon engines on the Scimitar allow the aircraft to reach a top speed of 630-640 knots (1,170 km/h, Mach 0.95) at sea level, with climb rate ~95-105 m/s. Besides being subsonic, the Scimitar also doesn’t possess an afterburner, meaning that unlike some of the more recent additions to the game, the Scimitar F.1 will feel, from a performance point of view at least, much more like a ‘classic’ top jet fighter of the day and will therefore become a must-have in the collection of old school jet jockeys in the game!

However, offering seasoned War Thunder pilots a taste of nostalgia doesn’t mean that the Scimitar F.1 doesn’t bring with it a taste of the modern either. This modernity can most clearly be noticed within the Scimitar’s weapons arsenal. Besides its primary armament of four 30mm ADEN cannons, the Scimitar can also carry Bullpup air-to-ground missiles as well as early Sidewinder air-to-air missiles, thus substantially bolstering its combat capabilities. Apart from all these high tech weapons, pilots who prefer a more analog approach to warfare will naturally also have bombs and unguided rockets available to them.

Interesting: This awesome Scimitar model is brought to you by your fellow player

Overall, the Supermarine Scimitar F.1 gives British pilots a highly capable jet fighter, effective in both air battles when used as a pureblooded fighter as well as in combined battles, where pilots can take advantage of the Scimitar’s vast ordnance options to turn it into a deadly close air support aircraft.

The Supermarine Scimitar F.1 is on final approach and is expected to arrive at the top ranks of the British aviation tree with the release of the upcoming major update. In the meantime, stay tuned to the news to find out what the next major update has in store for you. There’s plenty more to come! Until then, clear skies pilots!

Commenting is no longer available for this news
Rules
druidh58
39

NovA29R - you are an absolute hero mate. Well done.

Thank you guys! always a pleasure to se something new in the game. i hope some one fave fun with this plane.. if someone not.. you can blame me for give you an oppotunity not have fun) im sorry my english far from good)

NovA29R, Thanks to you. Do you dare to make your replacement? the Buccaneer Backburn

Yes, a job well done. You deserve anything you earned and more! Labors of love always turn out unbelievable. I tip my hat to you sir.

Dozer15, Nova's kind of a douche though, he talks down to other skinners on Live

Absolutely awesome plane. Give the British a bull-pup launcher, as well as another storied plane. Love this update!

Mirage in this update yes/no?

I know this is not tan kdev blog, but ZTZ-99 is coming or not? If dont come, why? We need top tier China tank!

Mate, what do you expect from Gaijin? They didn't even bother to copy+paste the ZSU-57 and M42 on their initial release, let alone give them anything unique and/or interesting, just look at the recent Type 69 premium xD

I thank his hard work.

Nice thing, would be even better if u can just delete that T69IIG thing :/

The last Supermarine machine in production line, finally making its way to WT. 👏😔

Gaijin won’t care about that. All they will say is just: “We have no evidence about the existence of this tank because we just too lazy to add this tank into the tech tree.” By the way, Anton NMSL!!!

You delete comments Very dog。 gaijin you are not human。

T90....Also give ussr some naval planes

Gaijin confirmed on the forums that the T-90 was not coming. However, they did not specify that it was the T-90A soooo....

Russian__Comrade, We really need some love

Kveldulferk, That would be great! I would happily take Kontakt-5 for the T-72B over nothing. I mean, as it stands now, if I'm not 600 meters away, I'm dead before I can get my gun on the target from the Front! I died to a Strv 90C. I have an Strv 90C and I had no idea they could pen top tier MBTs with that little dart. It needs Kontakt-5 badly.

Do every one of us a favour, and 3D design it, and apply Gaijin's revenue share program. It's much faster that way. ;)

Magiaconatus, wish i knew how