News
back to news
Development
16 December 2019

The SAAB J21 is a Swedish WWII-era twin-boom pusher configuration fighter aircraft, most famously known for its unique visual appearance. Coming to War Thunder as part of the Swedish aviation tree in update 1.95 “Northern Wind”, all pilots will have the chance to take control of this highly unusual Swedish fighter aircraft!

Briefly: The first production version of the J21, featuring good flight characteristics coupled with a formidable weapons arsenal of heavy machine guns and a cannon!

In 1941, Sweden started a domestic rearmament program in order to bolster the strength of its armed forces in an effort to ensure its neutrality during the ongoing war. Among the branches intended for reinforcement was the Swedish Air Force, which up until this point had mainly been operating foreign, partially outdated aircraft.

The SAAB company had already been working on a design study for a modern fighter aircraft since the early 1940s. Their project had a rather unorthodox design - a single-engine, twin-boom aircraft in a pusher configuration. With the arrival of the 1941 rearmament program, sparking a great interest for domestic aircraft production, SAAB began working on refining their design for mass production.

Due to the J21’s introduction to service coinciding with the dawn of the jet age, the type didn’t remain in active service for too long. In fact, the J21 was retired in 1954 - some ten years after its initial introduction - and its only operator remains the Swedish Air Force. 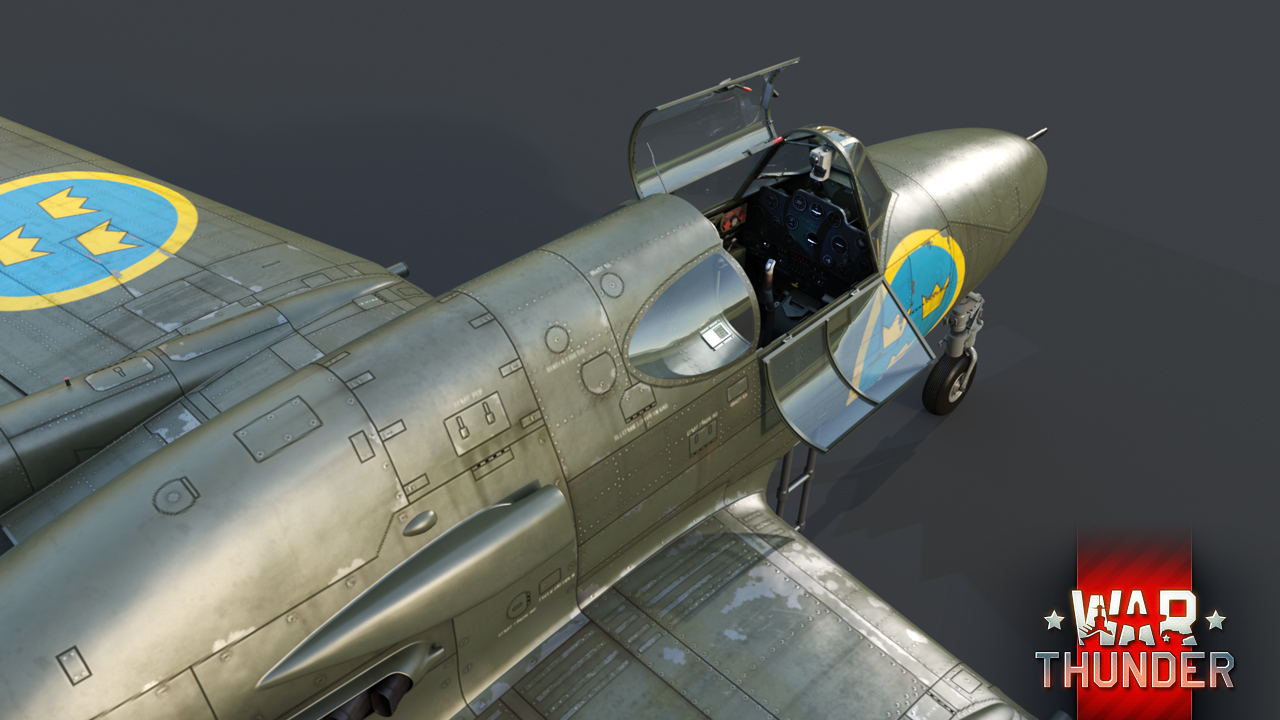 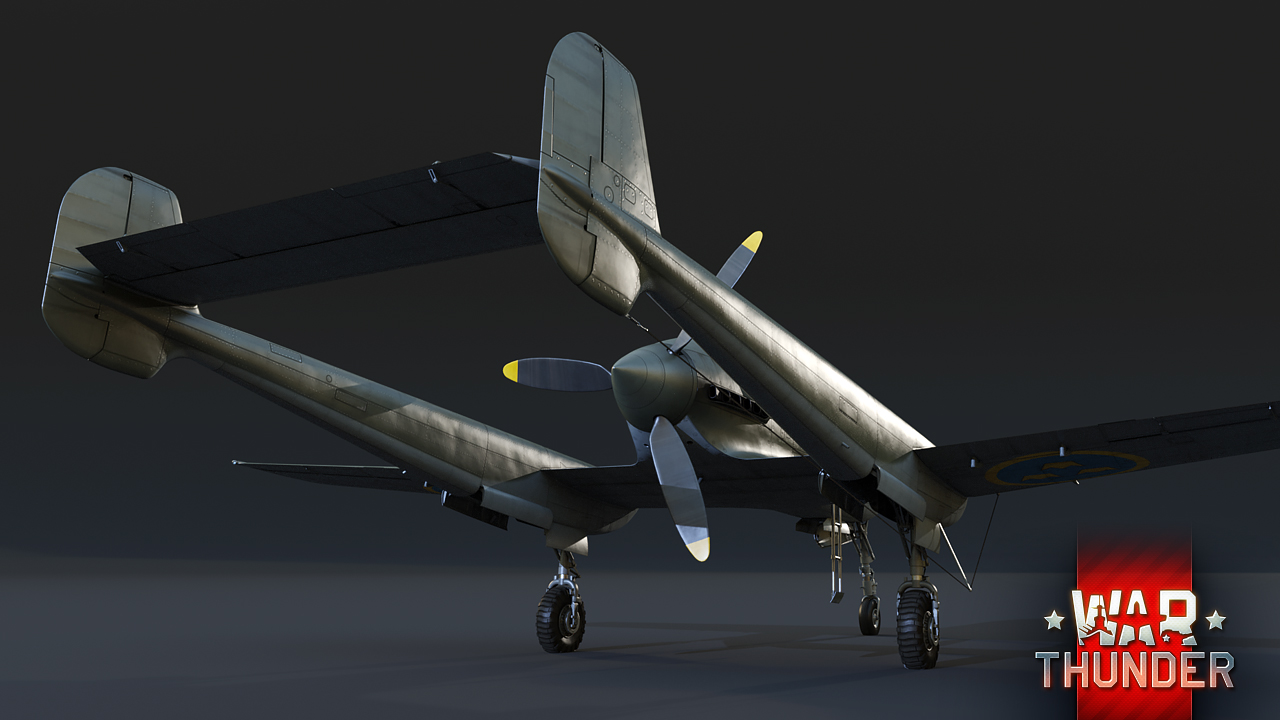 In War Thunder, the SAAB J21A-1 will be one of the many versions of the J21 awaiting pilots in the upcoming Swedish aviation tree, coming to the game with update 1.95 “Northern Wind”. Thanks to its unique visual appearance, the J21 stands out from other aircraft found in the Swedish aviation tree and because of this, as well as its many other qualities, will undoubtedly quickly become one of the most popular Swedish aircraft in the game!

The J21A-1 is powered by a Swedish licence-built version of the German Daimler-Benz DB605 engine inline engine, generating an impressive 1,450 horsepower. As a result, the J21A-1 is able to reach a top speed of 640 km/h, while the average cruising speed sits around 495 km/h.

Fun Fact: The SAAB J21 was among the first massively produced aircraft in the world to utilize an ejection seat to allow the pilot to safely evacuate the aircraft in case of an emergency.

Although it may not seem like it at first glance, the J21A-1 does feature a relatively formidable weapons arsenal. Being armed with four 13.2mm automatkanon m/39A heavy machine guns and a single 20mm automatkanon m/41A, the J21A-1 is suitably armed to deal with any threat it might come across in the skies - from single-engine fighters to multi-engine heavy bombers.

However, while its offensive arsenal is certainly nothing to scoff at, as far as secondary weapons are concerned, the J21A-1 doesn’t have anything to offer to pilots keen on raising hell for tankers on the ground. Due to the complete absence of secondary weapons such as bombs or rockets, the J21A-1 isn’t suited for ground attack runs and will only find limited use in combined battles as a result. On the other hand, for fighter purists it doesn’t come much better than this!

The J21A-1 is coming to War Thunder as part of the brand new Swedish aviation tree with the release of the upcoming update 1.95 “Northern Wind”. In the meantime, make sure to stay tuned to the news for more information regarding the next major update coming to the game. Until then, clear skies pilots!

We remind you that those who have purchased relevant early access packs will have instant access to Swedish Aircraft Tech Tree CBT in the upcoming update 1.95 "Northern Wind".

Commenting is no longer available for this news
Rules
Naughty_Lolita
19

It sure is a unique aircraft indeed!

And a stockpile of the finest meatballs.

Smin1080p, can haz herring and custard

and an allen key

Wilk there be aSaab 21R aswell

Will the Etendard make it for this update?

Ouiche, Oh nice, hopefully we get a devblog for it.

Don't mind me, just waiting for the apache dev blog

Smin1080p, i believe this is what we call a certified B R U H moment

Lovely plane ! Thanks for bringing this in game.

"In War Thunder, the SAAB J21A-1 will be one of the many versions of the J21 awaiting pilots in the upcoming Swedish aviation tree." So, do the other J 21 variants await us right from the start, or in future updates?

Hope that's what it means.

Based on this planes 3d model , the dev team easier could make the RMI-8 X/V .

Thats not really how 3D modeling works. Its like saying based on the Spitfire, we can make any single engined fighter aircraft. When in reality most models have to be made entirely from scratch every time. Even variants.

Though war thunder will say: The plane never flew and it was cancelled. But we have other vehicles that never saw combat or never flew OR ALMOST NEVER EXISTED!

"Fun Fact: The SAAB J21 was among the first massively produced aircraft in the world to utilize an ejection seat to allow the pilot to safely evacuate the aircraft in case of an emergency." That IS a fun fact. It would also make for a fun feature as well.

More like a cute little gimmick, as it wouldn't serve any purpose. It would be really cool if you could see the ejection from first person, though.

RussianBiasIsRea, Simulator? Be able to look around as your pilot hangs on his parachute. Also we do already have the HE 219 which was the very first with an ejection seat

Another beautiful model! And that telescopic ladder: Will the ladder fold down when you open the cockpit?

It wouldn't surprise me. Stuff like that happens on other aircraft as well including most of the having opening cockpits and some of those with expandable belly turrets will have their turrets "deploy" after takeoff.