The J22 is a Swedish fighter developed in the early 1940s to quickly address the urgent need of the Swedish Royal Air Force for a modern new fighter aircraft. Arriving as part of update 1.95 "Northern wind", the J22 will await eager pilots at the interim ranks of the brand new Swedish aviation tree, coming soon to War Thunder! 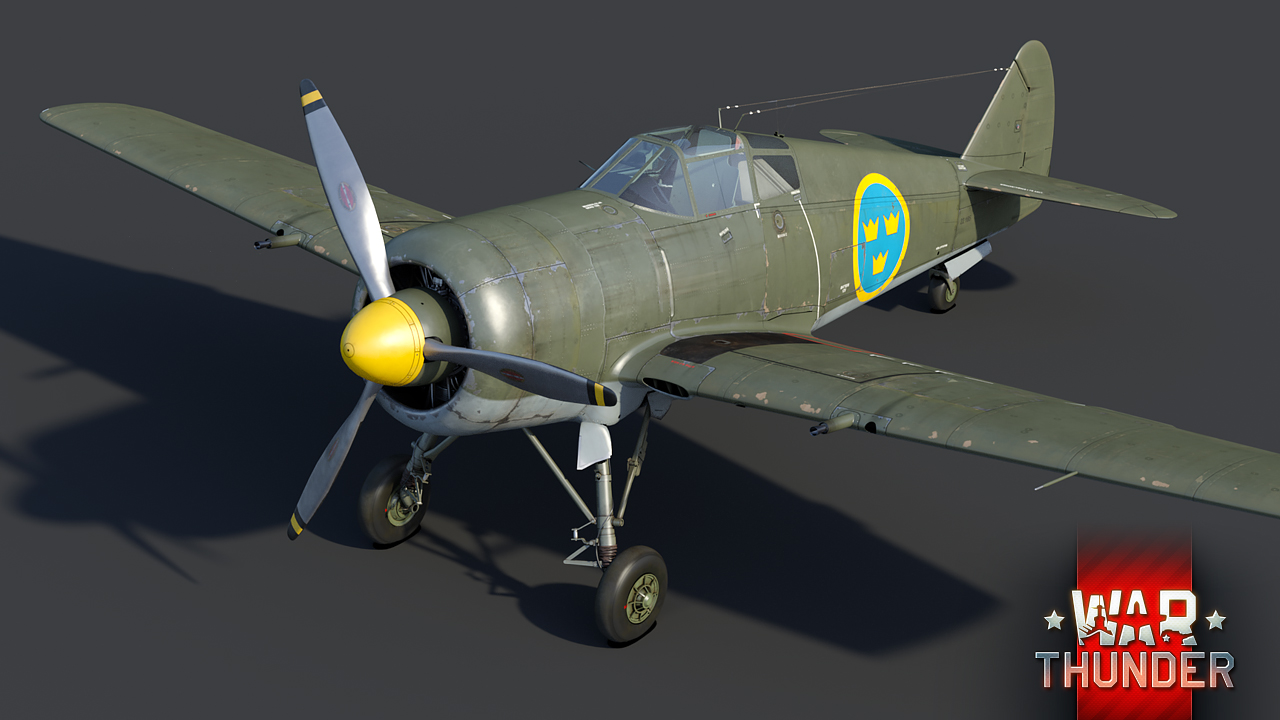 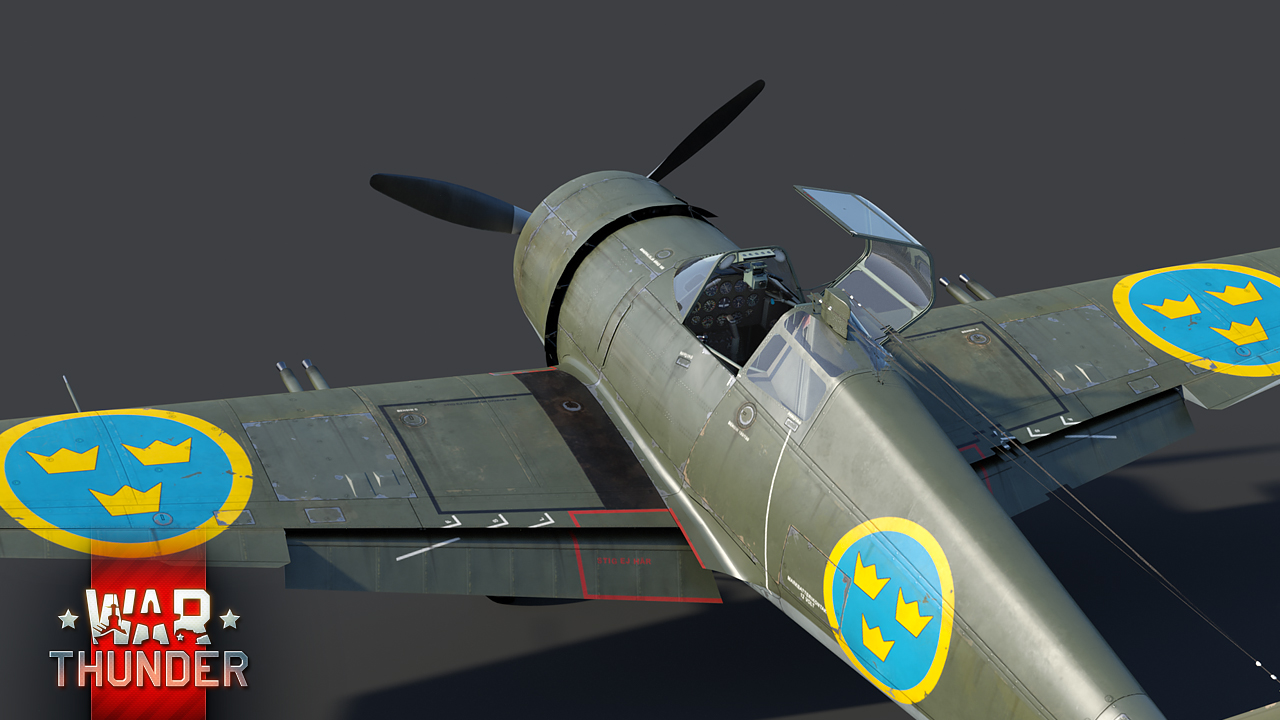 With the outbreak of WWII, the Swedish government began looking into purchasing new fighter aircraft from foreign manufacturers to bolster the strength of its air force. As such, Sweden signed a substantial production contract with the two American aircraft manufacturers Seversky and Vultee. However, before all deliveries could be made, the U.S. enforced an arms embargo on most European countries in 1940 which also affected Sweden, resulting in the order being only partially fulfilled.

As a result, Sweden was forced to consider procuring other fighter types. In the end, the decision was made to develop and produce an entirely new fighter aircraft domestically. However, with the country’s largest aircraft manufacturer - SAAB - being already overloaded with projects, the Swedish government simply decided to create an entirely new company and factory, solely dedicated to developing and producing the new fighter - the Kungliga Flygförvaltningens Flygverkstad i Stockholm (FFVS).

Development began immediately, and after 2 years of work, the first prototype of what would become the J22 fighter, took to the skies for its maiden flight in September 1942. Despite early problems, production of the aircraft commenced in 1942, with the first units being put into service in October 1943.

Production continued until 1946, with close to 200 units of the type being manufactured. The J22 served with the Swedish Royal Air Force until its retirement in 1952 and was well liked by its pilots for its good flight characteristics and reliability.

In War Thunder, the J22 will be one of the many new fantastic aircraft awaiting players in the brand new Swedish aviation tree, coming to the game with the upcoming update 1.95. Furthermore, pilots may not only get excited about flying a single version of the J22, but may instead look forward to having the chance to fly out both of the two major production modifications of the aircraft, namely the J22A & B!

The J22 is powered by the 1,050 horsepower STWC3-G engine - a Swedish copy of the American Pratt & Whitney R-1830 Twin Wasp engine. As a result, the aircraft is capable of reaching a top speed of up to 560 km/h in level flight at an altitude of 4,300 m, while the airframe itself allows the pilot to push the machine up to a speed of 650 km/h before running the risk of structural failure.

Although the engine might give off the notion that the J22 is more of a cumbersome aircraft when it comes to maneuverability, this is in fact only a half-truth. In reality, the J22 manages to achieve quite average agility, meaning that it’s able to hold its own in dogfights, but doesn’t stand much of a chance against more maneuverable opponents. However, this only remains true for as long as pilots stay at relatively low altitudes. Due to the fact that J22 isn’t fitted with a high-altitude capable engine, its performance rapidly deteriorates at altitudes in excess of 5,000 m, meaning that you’ll be best off keeping this bird a bit closer to the ground than some other machines.

Fun Fact: Due to problems delaying the production of the Swedish version of the engine, early production units of the J22 were fitted with original American Pratt & Whitney engines acquired from Vichy French H-75 Hawks.

In terms of firepower, the J22’s armament can certainly be considered as being on the lighter end of the spectrum, at least as far as the J22A is concerned. Namely, being fitted with a pair of high and a pair of rifle caliber machine guns, the first production model of the J22 is definitely more lightly armed than some of the other machines found at its rank. On the other hand, being armed with machine guns does mean that pilots will have plenty of ammunition at their disposal to deal with any enemy they may come across.

Unlike the J22A, the later production model - the J22B - differs from its predecessor, most notably in two one aspects - firepower and weight. As such, the J22B did away with the rifle caliber machine guns, and instead, engineers fitted the machine with a unified loadout of four heavy machine guns with an ammunition count of 250 rounds per gun, thus also increasing the aircraft’s weight slightly as a result. However, what both variants have in common is the complete absence of any suspended ordnance options, thus limiting the J22s’ effectiveness in combined battles.

In the meantime, be sure to stay tuned for more exciting news on the next major update coming to the game very soon. Until then, happy hunting pilots!

Commenting is no longer available for this news
Rules
I_NAMELESS_I
13

I wonder if there will be someone for Japan this patch that isn't a premium.

I hope so. I would really love to see the B6N sometime soon so I don't have to keep using the B5N in naval battles.

Where is the love for Russia T90-M?

Gaijin I have a problem. I personally play war thunder on a MAC. Since a recent client update my game has a serous problem. It shows only a part (lower left hand corner) of the picture on my display. I already tried some solutions which should work like changing the Resolution but nothing happened. Pls fix this bug because this one isn't only on my PC but on many other PCs using IOS.

You Know The Possibility Of Getting Helped By Posting Your Problem In A Devblog Is Very Slim. Go To The Forums.

Please jump into our official forum and post your problem in Technical Section.

Where my modern stuff at

*XTwistedMercX, Bruh theres too many shitty ww2 vehicales, most of the content is ww2.

From vk.com, translated by Google: "today they didn’t prepare devlogs anymore, they will be tomorrow"

Ok this is really cool and all but please consider doing 2x devblogs a day and have one for early tiers and one for later tiers? Nothing against this but this would help settle both WWII crowds & Cold war crowds. Is there another devblog planned today? Maybe a helicopter >.>