Prinz Eugen was one of three Admiral Hipper-class heavy cruisers, built for the Kriegsmarine during the mid 1930s. After having seen extensive use during WWII, Prinz Eugen is now ready to make an appearance in War Thunder too, becoming the German premium heavy cruiser, available soon to all captains with update 1.95 "Northern Wind"!

Briefly: The last Admiral Hipper-class heavy cruiser to be commissioned, featuring a late war configuration which provides a higher level of anti-air protection and survivability.

Prinz Eugen, named after an 18th-century Austrian general, was the third and last ship of the German Admiral Hipper-class heavy cruisers to see completion. Although being ready for commissioning in July 1940, an RAF air raid on Kiel lightly damaged the warship, causing its commissioning to be delayed until August.

Once repaired, Prinz Eugen returned to service in the late stages of WWII, acting initially as a training vessel for naval officers and providing artillery support for German ground units on the Eastern Front later on.

After the ceasefire in Europe, Prinz Eugen was handed over to the U.S. Navy as a war prize. After a detailed study of the ship’s design, the U.S. Navy assigned the warship to a nuclear weapons test at the Bikini Atoll in 1946. Having survived two nuclear blasts one aerial and one underwater Prinz Eugen with minor damage was towed to Enubuj Island which was a part of Kwajalein Atoll. There the cruiser was the target of another underwater nuclear explosion. The ship stayed afloat again but the damage caused, coupled with the lack of a concerted effort for survivability, resulted in it eventually capsizing and sinking.

In War Thunder, Prinz Eugen will be the first premium ship to become available to captains at rank IV of the German naval tree with the release of the upcoming update 1.95 "Northern Wind". Although sharing many similarities with its sistership already present in the game, Prinz Eugen, coming to War Thunder in its 1945 refit, will expand upon the capabilities of its older sister by offering its aspiring captains a stronger anti-air suite as well as increased crew count! 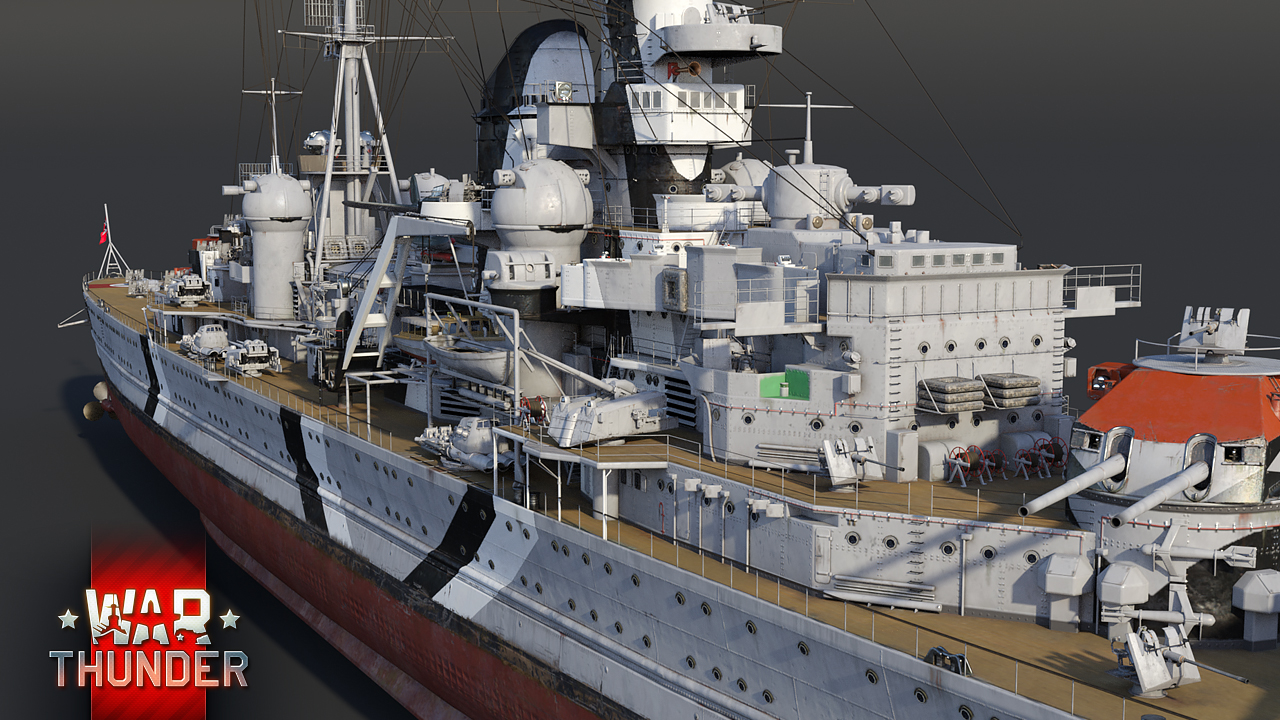 Fun Fact: The capsized, semi-submerged wreck of Prinz Eugen can still be found just off the shores of one of the islands of Kwajalein Atoll and remains a popular local tourist attraction.

The primary factor that helps differentiate Prinz Eugen from the more than familiar Admiral Hipper is its stronger anti-air armament. Namely, the ship was refitted in 1945 to feature a much heavier and more numerous anti-air loadout. As a result, daring pilots who seek a clash with Prinz Eugen can expect to go up against 4 double 37mm cannons, 6 quadruple 20mm cannons, 2 double 20mm cannons as well as a whopping 18 single 40mm Bofors cannons scattered around the ship’s decks.

In addition to substantially bolstered anti-air firepower, Prinz Eugen has another ace up its sleeve which further enhances it combat capabilities. Namely, Prinz Eugen’s crew count was significantly increased in the later stages of the war, resulting in the ship being manned by 1,768 crew members in total. Therefore, Admiral Hipper proudly passes on the title of “Most Crewed Naval Vessel in War Thunder” to its younger sibling, thus also allowing it to stay engaged in combat for longer and being able to potentially absorb more damage during clashes on the high seas.

Last, but certainly not least - Prinz Eugen will be coming to the game as the first German rank IV premium vessel, on the one hand giving both veteran as well as new captains the chance to faster progress through the German naval tree with every action performed in combat, while on the other hand offering a worthy new addition to the collection of every serious warship connoisseur in the game!

Prinz Eugen can be obtained through the purchase of a special bundle in our online store and will become available to all its prospective captains in War Thunder, following the arrival of the upcoming update 1.95 "Northern Wind". In the meantime, keep a wary eye on the horizon for more news regarding the next major update coming to the game very soon. Until then, calm seas captains!

Commenting is no longer available for this news
Rules
super_cacti
78

This was a bad move Gaijin. Amazing model tho, it looks amazing and many people will buy it. But this is a baaaaad move.

Could people stop whining? Top-Tier Premium is kind of a bad move (yes) BUT. People want navel because of BIG ships, this is a big ship to start with. Pay 2 Win only counts on Pg02 This is just fair cause Usa got the Helena. Premvehicles are a good way for people just want to skip some tiers, this could actually HELP naval to be revived, aber EC is kinda fun and the right gamemode for navel!

Whiskoof, I know you like to speak for everyone, but Deepsummer has a point.

My initial feeling was that this is truly a pay-to-win bundle. You cannot be uptiered. But I'm not so certain that it really matters. After all there are those who want to be able to club others. These either grind to the end of the tree to get their cruisers for free, or spend money on it. The end result is that both knock down those who are behind them in the progression, but the people who "earned" it have better crews and skill.

DarthGuppy, And I'll add for the record that I originally ground out the US tree up to the top cruiser during CBT (which was the first Omaha). Once I got there I found it boring. So I personally will not be buying this bundle - at least not anytime soon. 2000 GE and 30 days of premium in combination with the cruiser may perhaps be worth it to me when it goes on 50% sale at some point in the future. But I'm not judging those who do. War Thunder needs its paying customers.

This is so sad. An important ship on the battle of the atlantic became a top tier premium. This is how you kill naval.

It can't kill naval, because what is dead may never die))

Kill naval? You can't kill something that was never alive.

I called it @WarThunder, I called it. Another Top BR premium heavy cruiser that has better AA than the tech tree variant. Will we see now premium version of Chapayev next with even stronker AA? Such actions are exactly what quenches the sucess of WT NF! I was ignored in the past and here we are, where 2/3s of a team are bots because not enough ppl play NF! We had the players in the past but they were driven away by the comicly bad experience (map design, economy, overall game play ...) gg, wp!

Oh snap, what's up Napalm. If only more people spoke up against Gaijin's bs like you have.

vTuro24, People do speak up against it, but the mods conveniently delete those comments.

I agree napalm, but this happens in all game modes its arguably worse with premium helis, tanks or planes. At least ship vs ship combat, these premiums beside belfast are basically the same in armor and firepower.

BlackFlagger, At least in Tank and Air you can avoid them due to large tech trees. In Naval it's almost as if you are immediately faced with the worst issues of other modes at top tier.

iconic german heavy crusier and its a expensive premium? wow gaijin thanks for stooping this low

deruebermolch, It is the same thing with Belfast and Helena so I don't see the problem? it's not even better in armour and the Hippers AA is already really good so I don't see why you need more (And the Hipper has some pretty strong armour even though it doesn’t feel like it so often you gets ammo ragged) but it's only the name and the icon of the ship that really changes. It's mostly for people who really wanna support Gajin and wants the special historical important or famous vessels and vehicles

I dont know if pulling "another" premium ship will make people play navy. It should have been a regular, right now i dont see any interest to get any ship ...

Eighteen 40mm bofors? Hope you didn't book a dinner table with your wings cause I think they'll be resting in the ocean tonight.