The B3C was an export version of the German Junkers Ju 86 bomber, built under licence by the SAAB company for the Swedish Air Force. Coming to War Thunder with the upcoming update 1.95 "Northern wind", the B3C will be among the first aircraft available to pilots as part of the brand new Swedish aviation tree!

Briefly: A Swedish licence-built version of an interwar German medium bomber, fitted with licensed copies of British engines and featuring a wide selection of ordnance options. 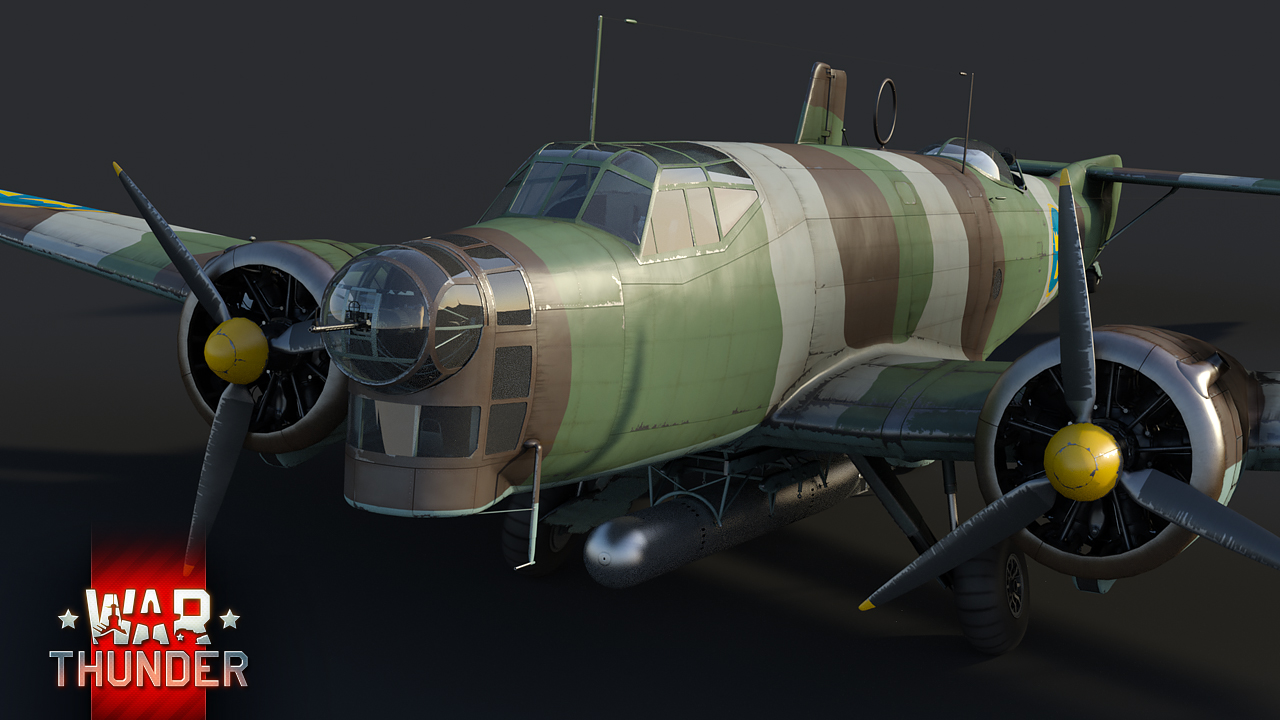 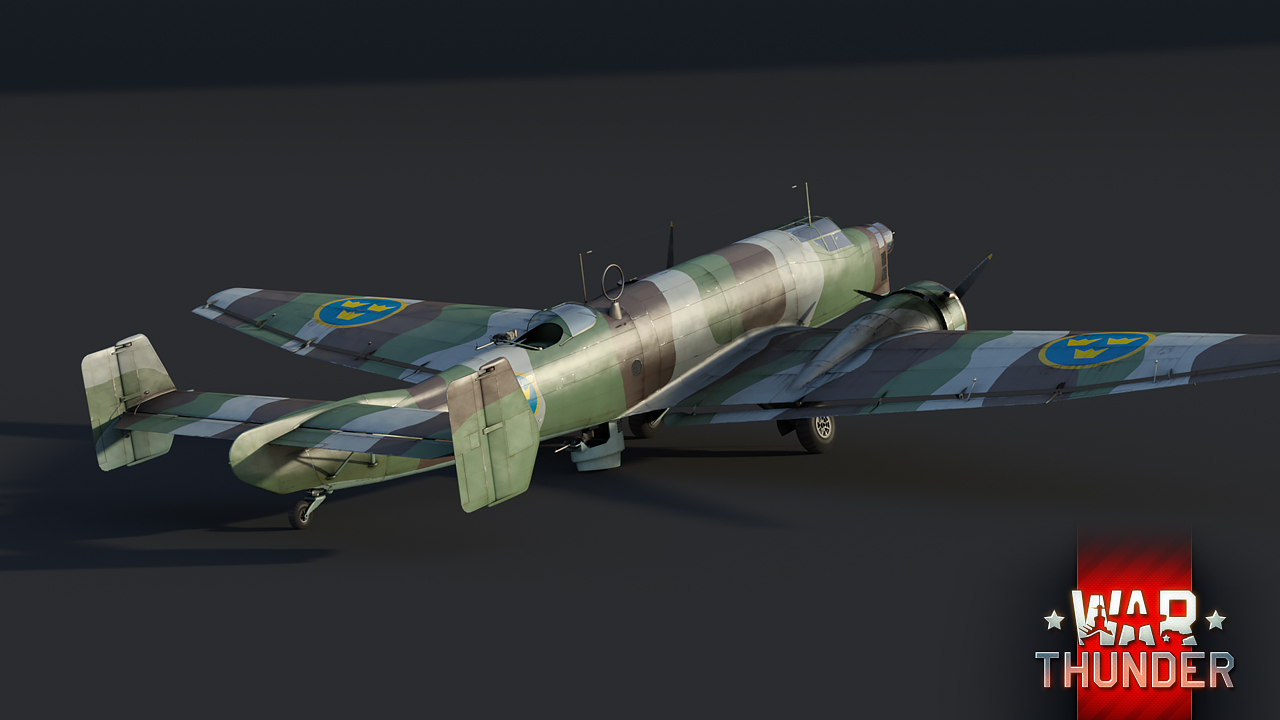 In 1934, a set of requirements was issued to both Heinkel and Junkers to develop a new twin engine aircraft, capable of acting as both a high-speed civilian airliner as well as a medium bomber for the German Luftwaffe. While Heinkel would go on to develop the far more successful He 111, Junkers developed the Ju 86, the first test flights of which occurred already in late 1934 and extending in early 1935.

Early production of the type commenced in late 1935 for military versions, while civilian variants entered service in 1936. Despite being seen as inferior to the He 111, especially in military service, the Ju 86 nonetheless remained a relatively popular aircraft on the export market, being purchased by various operators from around the globe, ranging from South America, over Europe and going all the way to Asia and Oceania.

Among its many operators was also Sweden, which not only purchased a number of Ju 86s directly from Junkers, but also acquired a licence to manufacture the type domestically in the late 1930s.  Both imported and built under licence by the SAAB company, the aircraft received its new designation B3, and unlike the German original, the Swedish counterpart received different engines (namely licence-built versions of the Bristol Pegasus radial engines) as well as Swedish weaponry.

As with other countries, Sweden employed their Ju 86s in both military as well as civilian roles for many years before, during and after WWII, with the last of the Ju 86s being decommissioned during the late 1950s. In total, only about 15 B3C and one B3D were built for the Swedish Air Force by SAAB between 1939 - 1940 out of the original 40 aircraft planned.

In War Thunder, the B3C will be one of the first machines awaiting eager pilots at the starting ranks of the brand new Swedish aviation tree, coming to the game with the upcoming update 1.95 "Northern wind". Despite sharing many of its general characteristics with other low ranking bombers in the game, the SAAB B3C still offers its future pilots a relatively powerful and quite versatile aircraft, ensuring a smooth start to the journey of progressing through the ranks of Swedish aviation tree!

Unlike the original German Ju 86, the Swedish B3C is powered by a pair of NOHAB MY XXIV 9-cylinder radial engines - Swedish licence-built versions of the Bristol Pegasus XXIV engine - generating approximately 900 horsepower each.

Being a bomber aircraft, the B3C is naturally capable of being fitted with a relatively wide selection of ordnance options. In its early service life, this mostly consisted of combinations of 250 and 50 kg bombs, while later, the B3C also received the option to carry a single 853 kg torpedo mounted externally, underneath the bomb bay. As such, the B3C will be able to attack a wide variety of targets in the game, giving it greater flexibility in battle and allowing the pilot to exercise a higher degree of freedom when it comes to choosing his targets.

Fun Fact: The only known surviving example of the Ju 86 is preserved at the Swedish Air Force Museum in Linköping.

Although the B3C might appear at first glance to be easy prey for fighter pilots, on closer inspection, this might not necessarily turn out to be the case. In fact, the most common angles of attack are closely guarded by three machine gun turrets, keen to scare off any overzealous attackers.

Commenting is no longer available for this news
Rules
Shepard_FR
20

So, can we expect the Ju-86 for the Germans at some point too ?

The German aircraft was powered by Diesel engines that were generally very underpowered (even less than the He-111s and other low rank bombers) and the later marks are more problematic for the opposite reasons. So really it would be a controversial, quite useless aircraft in an already extreamly well populated German bomber tree, which is why the conventionally powered Swedish version is both more interesting and more suitable.

My hope as well. Hopefully with this patch.

this is the 2nd devblog

SNEEKESNAKE, 3rd. Also he ment today so don't try to be funny

Is It Me, Or Does The Propeller Movement Not Seem Perfectly Circular?

It does seem like they are loose, but propeller hub doesn't shake with them.

At first i thought it was ugly... but now i'm starting to like it.

The Longer You Look, The More Interesting It Gets.

Ju-86 getting into German tech tree?

Probably not, as the Ju-86 had way worse engines (think like the Hs. 129, but heavier), it would under-perform quite a bit

Nice plane. With the Mirage not yet ready can we expect the F-8 for the USA and France?

well done, you're the first that guy

epiccheese, Sometimes I think they don't pay Stona, Ouiche, or any of the "administrators" enough to put up with guys like Nanotyrann.